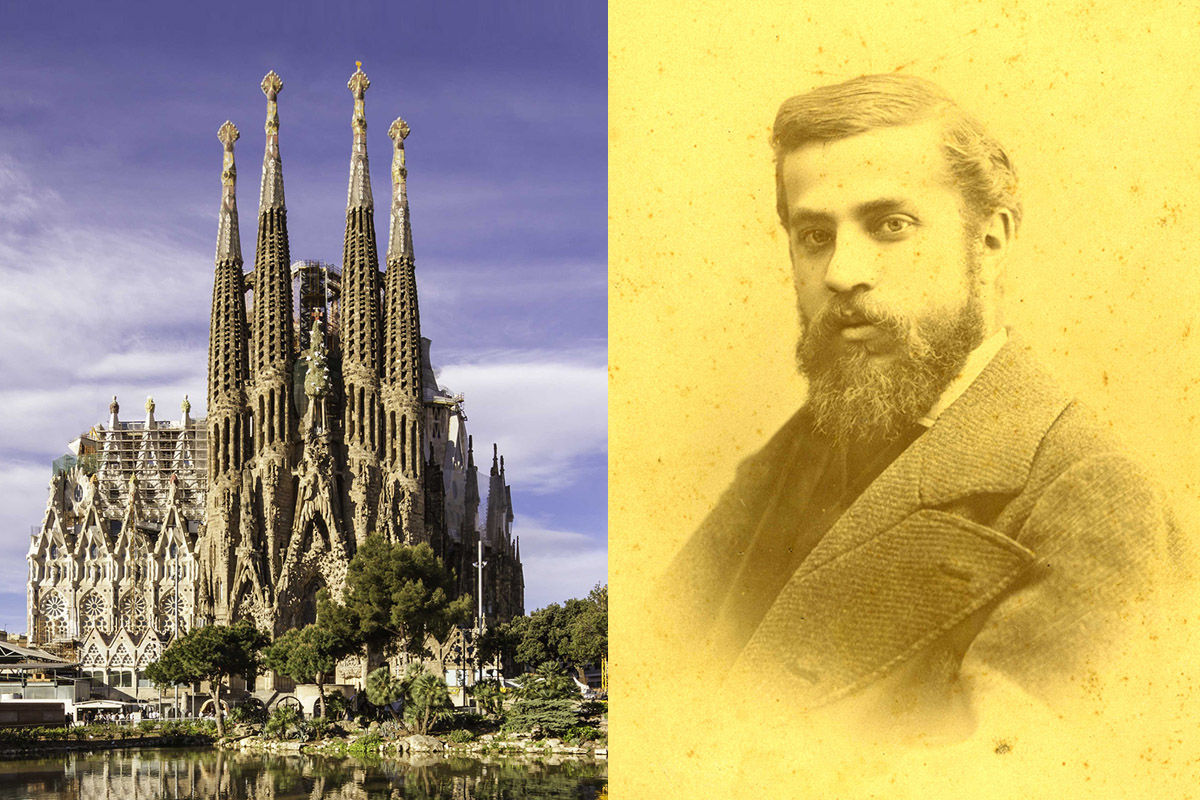 The current Antoni Gaudi retrospective, on now at the Musée d’Orsay in Paris and running until July 17, shines a spotlight on one man’s unique vision and lasting legacy. Prestige takes a closer look at this unique artist’s brilliant career, and tragic final days.

Born in 1852, in the Catalonian region of Spain, Antoni Gaudi is best known for his fantastical architectural creations, which are at times as bizarre and dreamlike as the paintings of Salvador Dali (who, incidentally, is also Catalonian). But Gaudi was not a surrealist, even if some art historians have referred to a few of his later creations as “proto-surrealist”. Instead, he regarded himself as belonging to an emerging movement known as Catalan Modernisme, which was very much in line with the ornamental Art Nouveau style that flourished throughout Europe and the United States between 1890 and 1910.

To fully experience the power of Gaudi’s architectural triumphs, you really have to travel to Spain, and Barcelona in particular; which is where the majority of his creations are to be found. However, for those interested in viewing this iconic artist in a different way – via his drawings, renderings, furniture and houseware designs – the Musée d’Orsay in Paris is currently home to a large retrospective – simply entitled Gaudí – which runs until July 17, 2022.

Organised by the Musée d’Orsay and the Musée de l’Orangerie in Paris, along with the Museu Nacional d’Art de Catalunya (MNAC) in Barcelona, the exhibition has assembled film, photos, artefacts, original drawings, scale models and even a 3D projection of Gaudi’s workshop, all with the aim of exploring how this brilliant architect was not the isolated genius of myth, but was, in fact, very much shaped and influenced by the specific political, social, and artistic environment of his day. It also reveals how Gaudi’s work ended up transcending the very time in which he lived.

Born into a family of coppersmiths, Gaudi always remained proud of his humble roots as a labourer’s son. After his primary education in Reus, he moved to Barcelona to study at the Provincial School of Architecture, where he graduated in 1878. Since he was not a native of Barcelona, and did not belong to a wealthy family, his early career began with hands-on experience working in the studios of other architects, including Josep Fonseré, for whom he designed some elements of Barcelona’s magnificent Ciutadella Park. But perhaps his greatest opportunity in those formative years was to enter the social circle of the brilliant and innovative Joan Martorell, who was most familiar with architectural innovations abroad.

The majority of Gaudi’s first important works were commissioned by the wealthy Güell and Comillas families, and they include Casa Vicens (1883-1888), Finca Güell (1884-1887) and the Palais Güell (1886-1889) in Barcelona, as well as the Villa El Capricho (1883-1885) in Comillas. These early structures bore distinct Orientalist (Mudejar) and neo-Gothic influences, while at the same time hinting at the wild flights of fancy yet to come.

As the 20th century dawned, Gaudi began work on Parc Güell, a massive urban project that took 14 years to complete. Located on a picturesque hill overlooking Barcelona, this breathtaking playground park is an overwhelming spectacle of colour, shape, and unbridled imagination. During this same period, he worked on a number of casas (or “houses”) in the city’s Eixample district, and the Calvet house (1898-1900), the Batlló house (1904- 1906), and the Milà house (1905-1910) – more commonly known as La Pedrera – remain absolute must-see Barcelona landmarks.

With Parc Güell and the various casas, Gaudi’s style had become much more fluid and undulating, trading right angles for sensuous curves and experimenting with the use of recycled material, such as chipped and broken pottery and ceramics. This was the Art Nouveau-influenced Modernisme style that would become both his trademark and his legacy.

While these large-scale structures are what Gaudi is best known for, he also had great success designing furniture; a sideline that began even before his career as an architect. In 1878, the same year he graduated, he was tasked with designing a display case for the Comella glove factory’s kiosk at the World’s Fair in Paris. His unique design allowed viewers a 360-degree view of the goods inside, and the case went on to win a silver medal at the fair. That particular case also caught the attention of Eusebi Güell, of the aforementioned Güell family, which is how Gaudi first came into contact with his future patron (and the man who would be his primary client in later years).

As Gaudi’s career in architecture progressed, he was also creating more and more of the furniture and furnishings for these buildings. By putting a significant focus on the ornamentation of the interior, he drove the whole spirit of the structure to reflect his vision. At Casa Calvet, for instance, he designed everything from the seating – velvet armchairs and stools, three-seat sofas, and double benches – to the oak dining tables, pine book cases, office desks, and clothing racks.

With the completion of Casa Calvet he became so acclaimed for his bold furniture designs that in 1902 he was commissioned to decorate the Arab Room in Barcelona’s Bar Torino, which is perhaps one of the best examples of the Catalonian Art Nouveau aesthetic. Four years later he began work on Casa Milà, the last private residence of his career, for which he designed a stunning suite of complementary furnishings including oak doors, brass door jambs, armoires, and more.

Of course, no history of Antoni Gaudi is complete without a mention of the most ambitious undertaking of his career: the Sagrada Família cathedral, which is still under construction almost 100 years after the architect’s death. Despite not being finished, this mammoth project, with its multiple spires, labyrinthine interiors, and impossibly ornate façade, is one of the major tourist attractions in Barcelona and has been declared a UNESCO World Heritage Site.

Construction began on the Sagrada Família in 1882 but it wasn’t until the following year – when Francisco de Paula del Villar, the original architect, left the project – that Gaudi became involved. He was later appointed director, in 1884, and while he gained fame working on other architectural projects over the next three decades, from around 1910 onwards – and definitively from 1918, the year of Eusebi Güell’s death – he shut himself up in his studio and refused to work on anything but the cathedral.

He considered new commissions to be worldly temptations that would deviate him from his work on Sagrada Família, which he envisioned as the “cathedral of the poor”. During the final few months of his life, Gaudi’s residence was the temple studio, where he lived amongst his mock-ups, plaster casts, sketches, photographs, proofs, and models. With the ever-growing intensity of his Roman Catholic faith, and the spectacularly glorious vision he was bringing to life at the cathedral, it’s small wonder he was dubbed ‘God’s Architect’ by his contemporaries.

To fully appreciate the tragedy of Antoni Gaudi’s final few days on earth, one must understand the change in character he underwent after committing himself entirely to working on Sagrada Família. Although he remained single throughout his life, when he was a young man – flush with success – he dressed like a dandy in expensive suits, always sporting a well-groomed beard and a fine haircut. He also ate well, made frequent visits to the theatre and the opera, and visited his project sites in a horse-drawn carriage. The older Gaudi, by contrast, was exasperatingly frugal, wore old worn-out suits, and neglected his appearance so much that sometimes he was mistaken for a tramp.

On June 7, 1926, while on his daily walk to the Sant Felip Neri church for his prayer and confession, he was struck by a passing tram. Witnesses assumed the unconscious man to be a lowly beggar, and so he did not receive medical aid right away. Eventually some passers-by got him transported to a hospital, but there he received only rudimentary care. By the time someone finally recognised him the following day, his condition had deteriorated severely and he died on June 10 at the age of 73. After his funeral he was laid to rest in the crypt of the Sagrada Família, where he remains to this day.