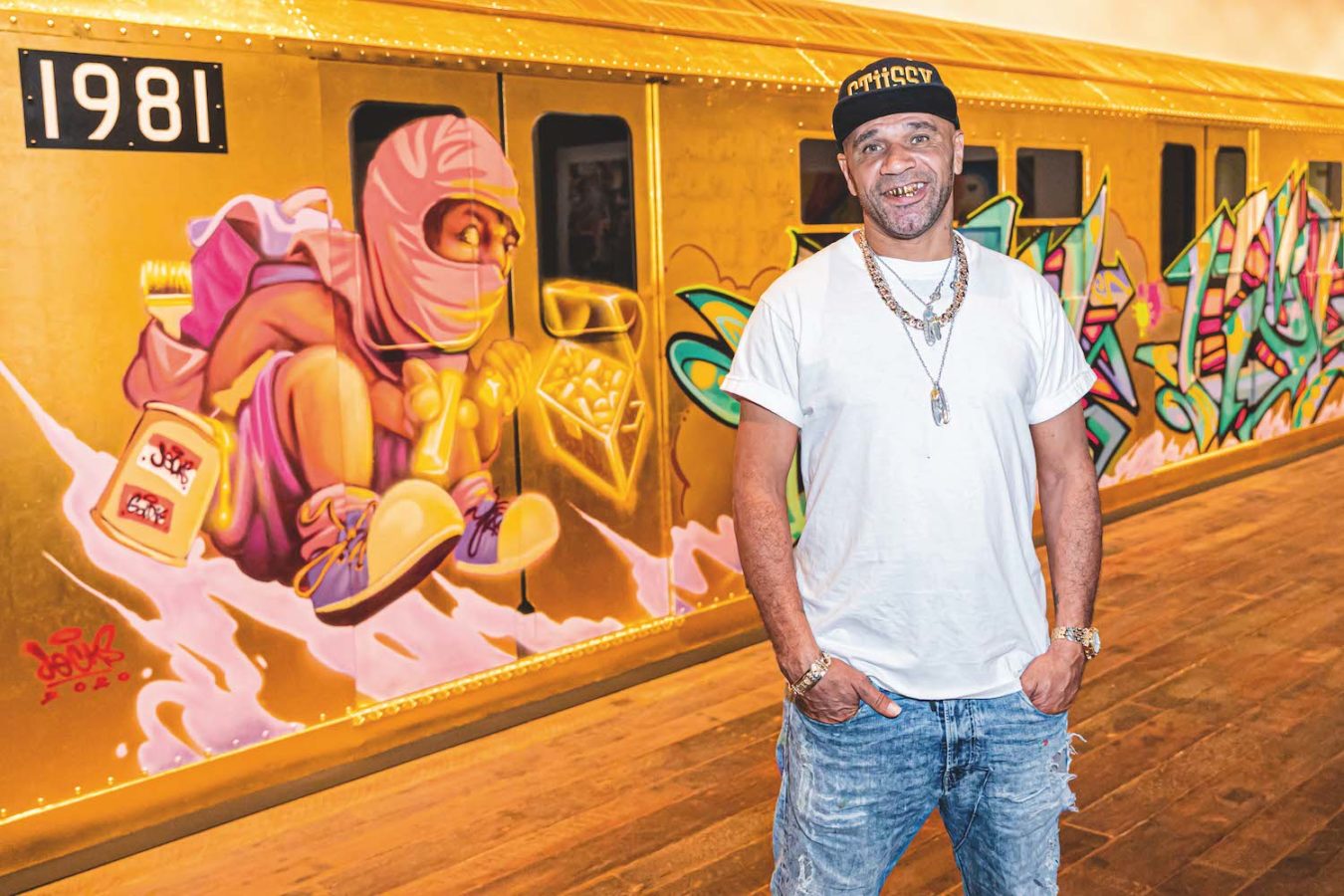 Early last month, Bangkok’s Charoen Krung creative district witnessed the unveiling of Aurum Gallery — a brand-new, 528 sqm, high-ceilinged art space – part of the Warehouse 30 complex – dedicated to showing the best in contemporary, urban, and street art from around the world. The man who both conceived and curated the project is none other than acclaimed British-born DJ, musician, actor, and artist Clifford Price MBE (Member of the Order of the British Empire), better known to the world as “Goldie”. And while this entertainment industry maverick has been making his full-time home on the island of Phuket for the past several years, Bangkok is where he decided to establish his first permanent gallery.

“I felt that the city’s Charoen Krung area seems to be an artist’s hub and a creative environment,” says the highly animated Englishman, revealing his trademark gold-capped front teeth with every grin. “The area is very much like Brooklyn to me, making its own kind of infrastructure. Slightly reminds me a little bit of Shoreditch in London as well.” 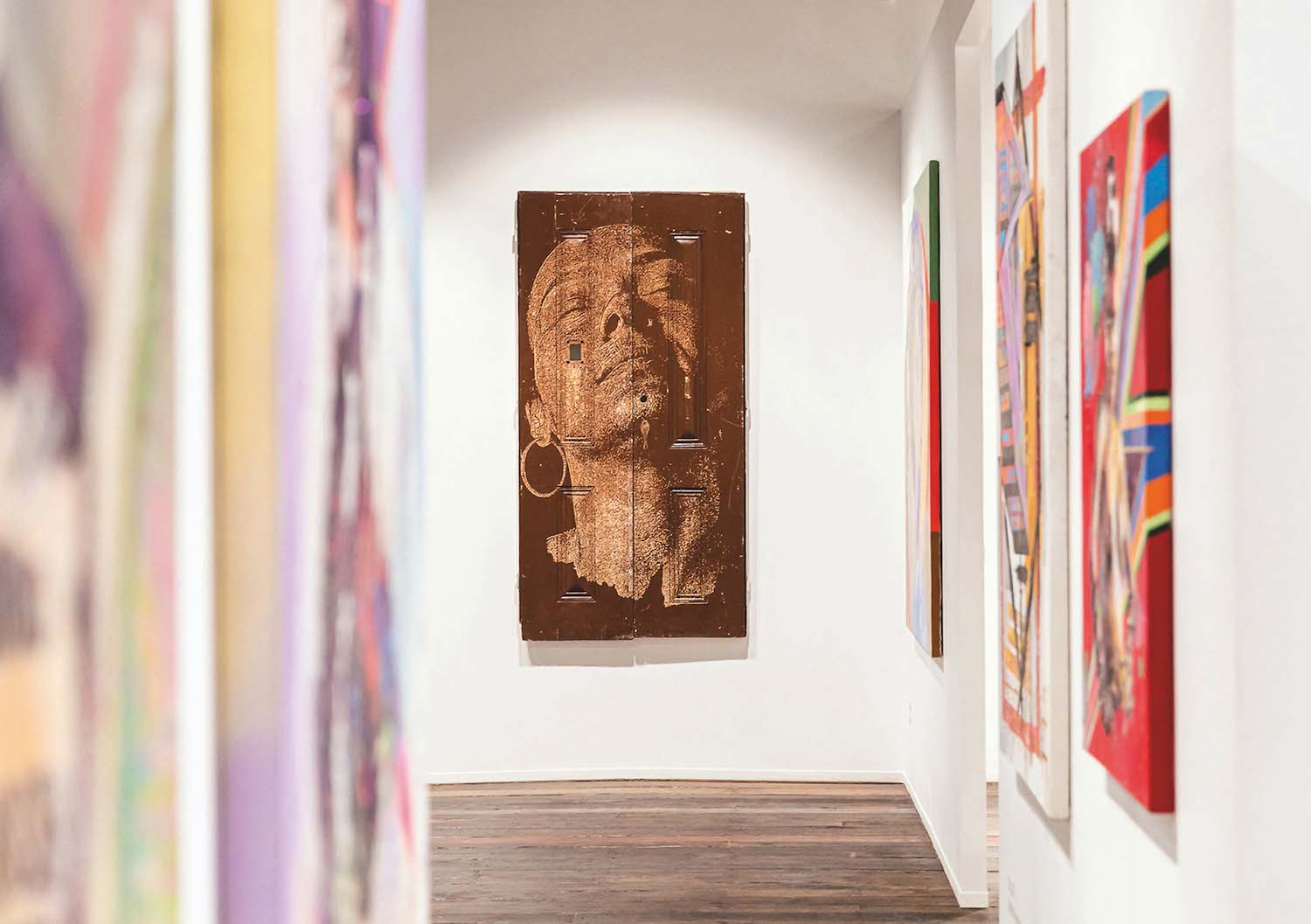 One thing all three of these places he’s mentioned have in common is an abundance of graffiti-style street art, and these are precisely the types of artists being showcased at Aurum (the Latin word for “gold”, naturally). Inside the gallery works by Goldie himself share wall space with street art legends such as Bio, Crash, Saturno, Ben Eine, and Odeith, as well as young Thai artists like P7, Benzilla, Jecks, and Wal Chirachaisakul. And there’s plenty more still in storage. “We have enough to fill the space again,” Goldie adds with a laugh.

Despite Thailand having its own vibrant street art scene, Goldie is adamant that bringing in some of what he calls the “old masters” is important, especially for aspiring Thai artists. “When I spoke to young Jecks – who’s no longer young, he’s 30 – he said he’s never heard of Mode2. It was almost like saying you’re into rock music, but you’ve never heard of AC/DC!”

I decide not to reveal at that particular moment that I also have no idea who Mode2 is, but I have watched with interest the rise in popularity of street art worldwide. The recently released documentary film Banksy and the Rise of Outlaw Art, directed by Elio Espana, is a great primer for anyone interested in delving a bit deeper into the subject, and the mystery man the film profiles is inarguably one of the biggest names in the art world today. 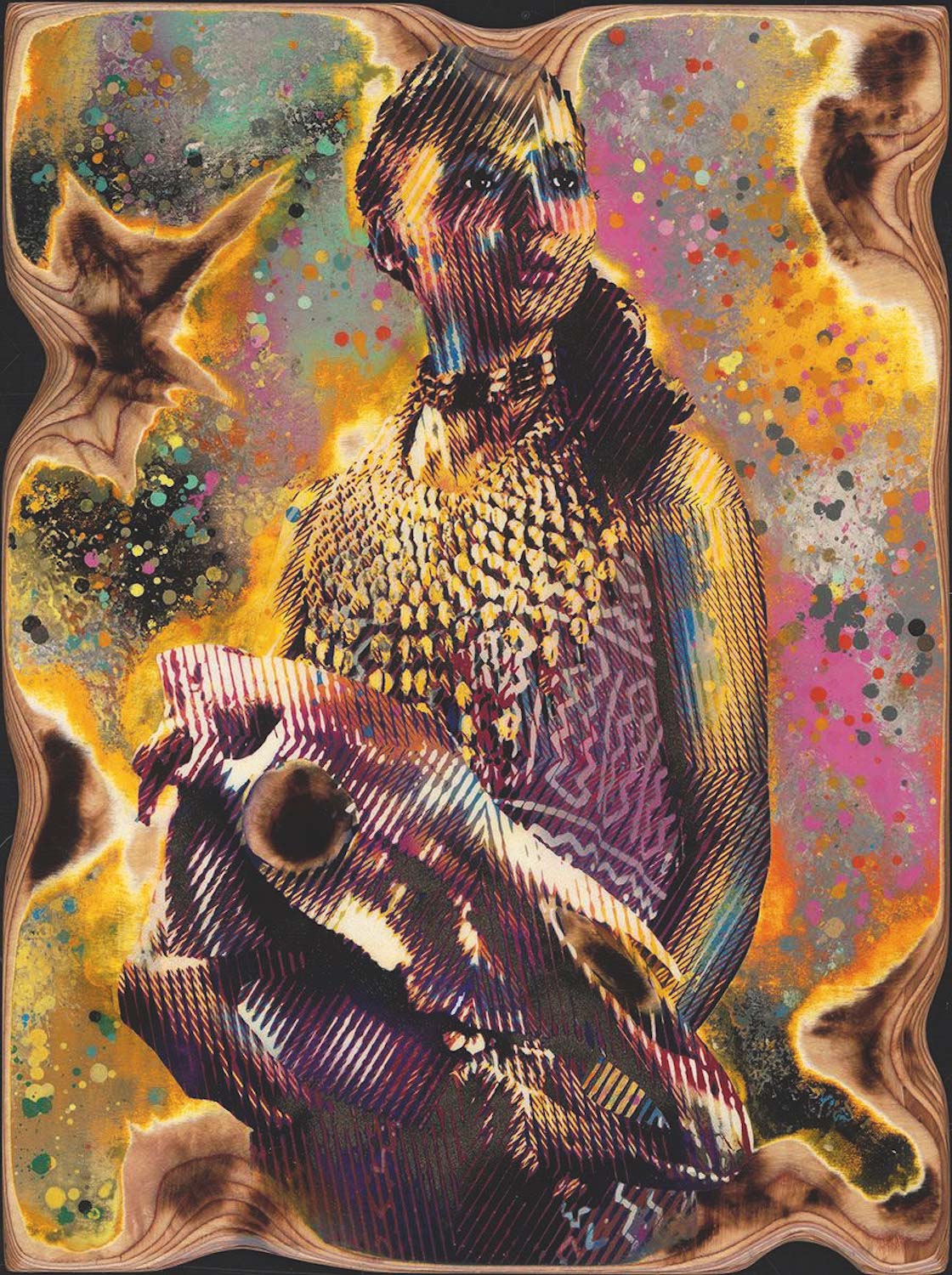 “The great thing about this art form is that we’re the true bastion of hope within the art world,” explains Goldie. “This subculture in itself is such a powerful medium. Think of when the art world was on its ass, and Banksy came along and saved them all. He saved the world of contemporary in terms of what they would see as art, which is brilliant. The idea of even shredding a painting live in situ as a stunt [at the infamous Sotheby’s auction in 2018], just goes to show that not only did he make a complete fool of the system itself, but he also showed that this art can transcend. People are now going out and doing ‘graff’, and then they might sell a piece for a million quid. That’s the sort of control these artists have now. And that’s beautiful, innit?

“This is a street culture that was learned from the youth. It wasn’t created in the halls of the Vatican or the great schools of art. This came from outside of those walls. This became the [illegitimate] child of contemporary. And this young child has matured and has been given the right of having its own place in history. When I hear someone whining about ‘Well is graffiti art, or is it vandalism?’ I say, ‘You’re asking a mundane, stupid question’. It’s the voice of the people! “We need our freedom,” he continues, “and art through the ages has saved us. Particularly when I look through the kaleidoscope of my own life, from a traumatic point of view, art is very important.”

The traumas to which Goldie alludes began early on for him. Born in Walsall, in England’s West Midlands, to a Scottish mother and Jamaican father, young Clifford Price was put up for adoption and raised both in childcare homes and by several foster parents. His 2002 autobiography Nine Lives paints a grim picture of this period. But as a teenager he found some artistic escape in breakdancing and graffiti art, and his artwork around Birmingham and Wolverhampton was featured both in Dick Fontaine’s 1987 documentary Bombin’, and in the influential book Spraycan Art. His graffiti prowess led to him spending a significant period of time in New York in the 80s – the very epicentre of the movement – but by the end of the decade he was back in the UK, and by 1991 he’d become fascinated with the British breakbeat music scene and the pioneering jungle and drum and bass sounds. 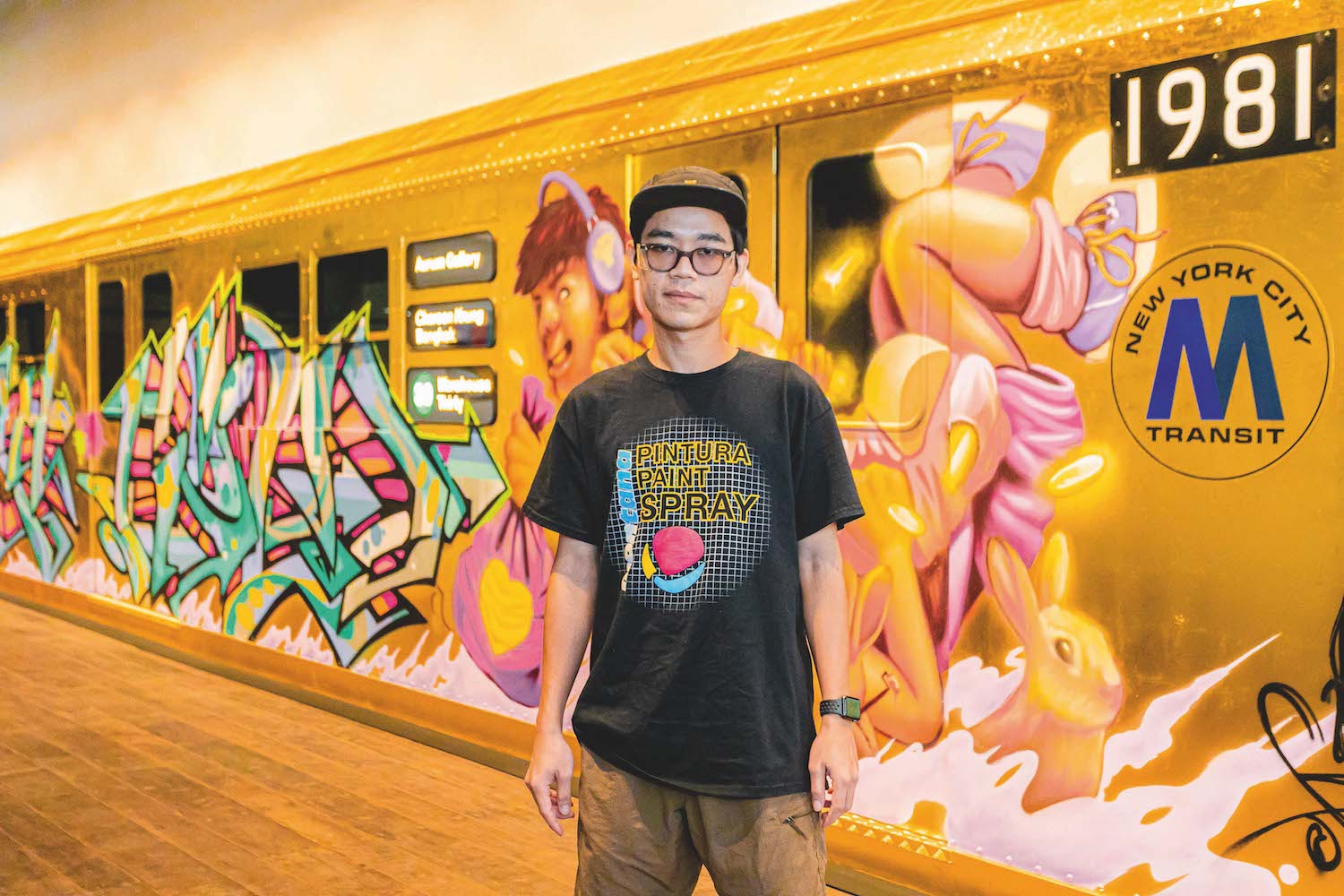 From this point on, the trajectory of his career seems to go nowhere but up. After a series of successful EPs he set up his own record label, in 1994, and a year later released his first studio album, Timeless. By fusing the breakbeats and basslines common in jungle with orchestral textures and soul vocals, this disc is often described as one of the landmark British releases of that decade – a decade that’s also peppered with TV and film appearances by Goldie, including small roles in Guy Ritchie’s Snatch, and the James Bond feature The World is Not Enough (as the evil Mr. Bullion).

During the 2000s he continued to work on a wide variety of projects – even appearing in the BBC soap Eastenders – and in 2016 he was appointed a Member of the Order of the British Empire (MBE), where his contribution to the British music industry was formally recognised during an Investiture ceremony at Buckingham Palace led by Prince Charles. Speaking to reporters after this landmark event he stressed how the arts is so important for young people. “Music and art well and truly saved my life,” he stated. 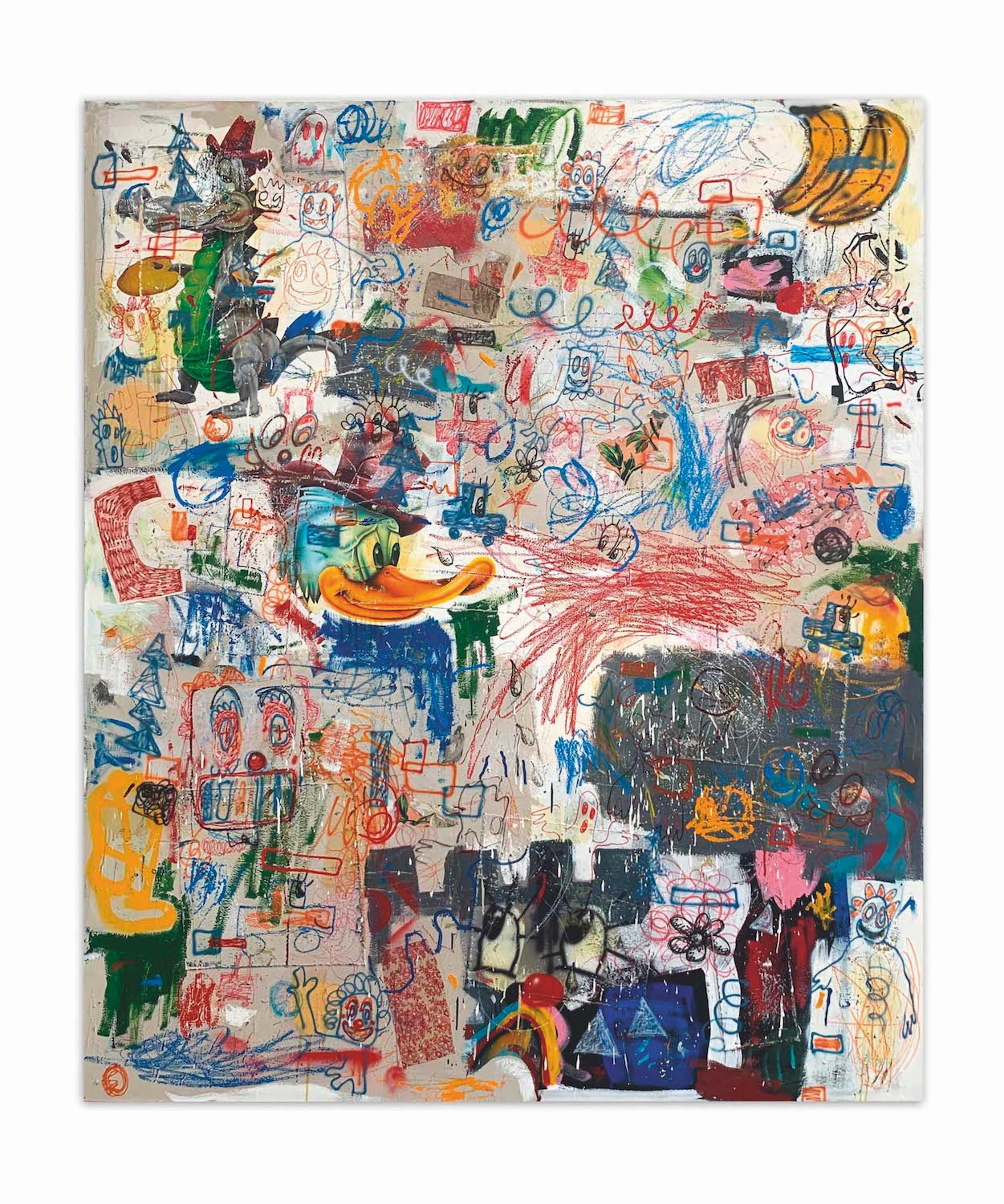 Around the same time – 2014 to be exact – Goldie had, along with his wife and their kids, relocated to Thailand. “The idea of being here was to completely reinvent myself,” admits the now 55-year-old. “I can walk down the street and no one knows me. I can kind of retire, set a different pace. The idea of reinvention is everything.”

Of course, retirement is a relative term for a ball of energy like Goldie which is why, along with the Aurum Gallery project and his own paintings, he’s also doing lots of writing, including wrapping up work on a six-part TV drama series with director Dan Cadan. It’s just another in a list of accomplishments that has seen him collaborating with everyone from David Attenborough to David Bowie. “I wanna be the guy who does all those things,” he says, reflecting on his wide breadth of artistic pursuits. “What else is there for me to do but to look internally at my own journey and think to myself, what do I really want to leave behind? I mean, [if you look at] most people, on a daily basis, what are they going to leave behind? Do you want to leave a phone behind with lots of pictures in it? Is that your contribution to the world?”

His responsibilities at Aurum will see him travelling to Bangkok more frequently, and on his next trip to town he says he’ll definitely be delving deeper into the local nightlife. “There’s a couple of bars I’ll be hanging about in,” he reveals, “and I like good food. I’m a bit of an eater.” 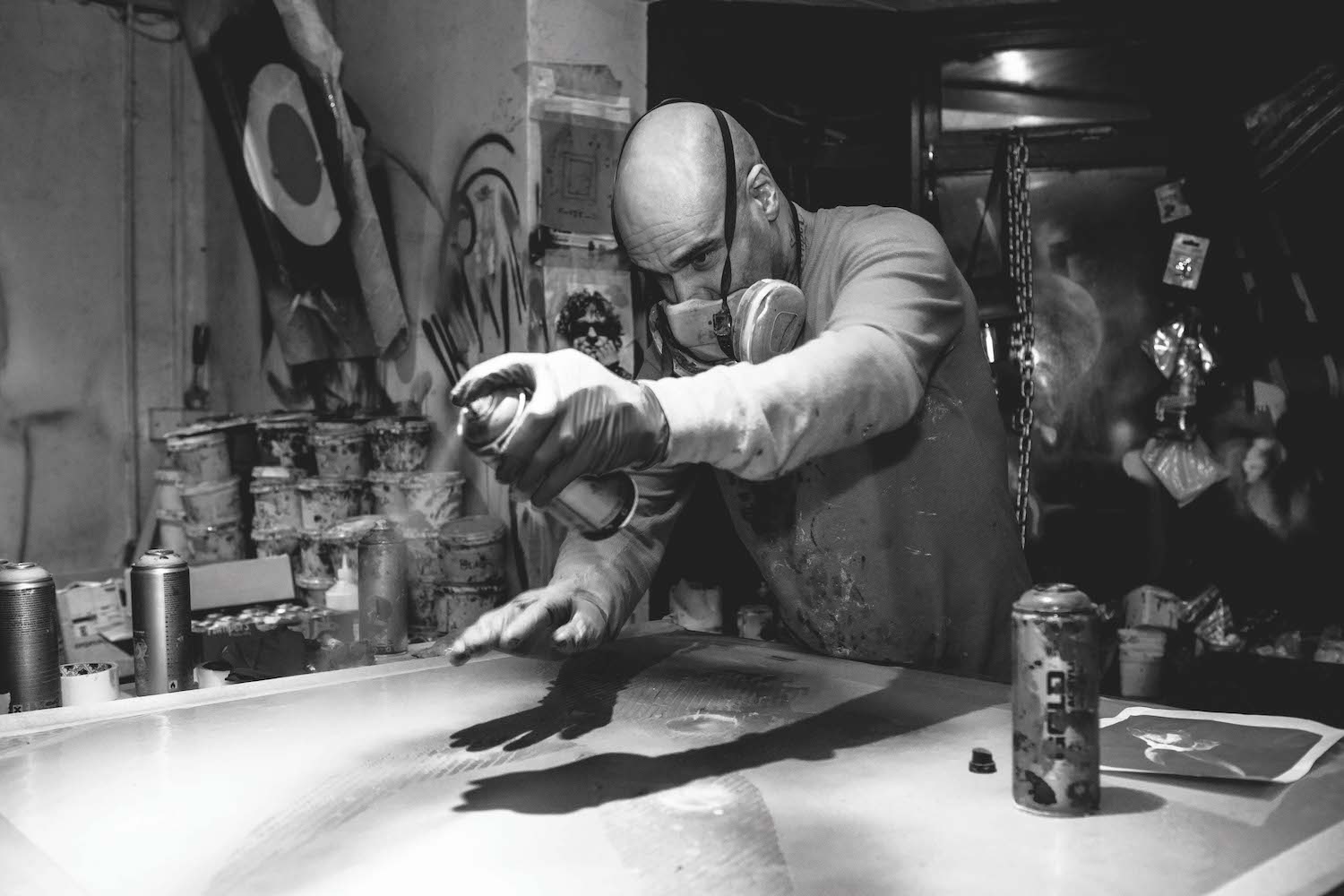 So, any chance of a surprise DJ set at one of the city’s nightclubs during his next visit? “If they wanna hire me, sure!” he laughs, adding, “I’m actually itchy to play. A kid never forgets how to ride a bike, know what I mean?”

To find out more about Aurum Gallery, visit aurum.gallery.

@hublot, every year, for the last 14 years, has cr