Behind the Ongoing Love Affair Between Fashion and Literature 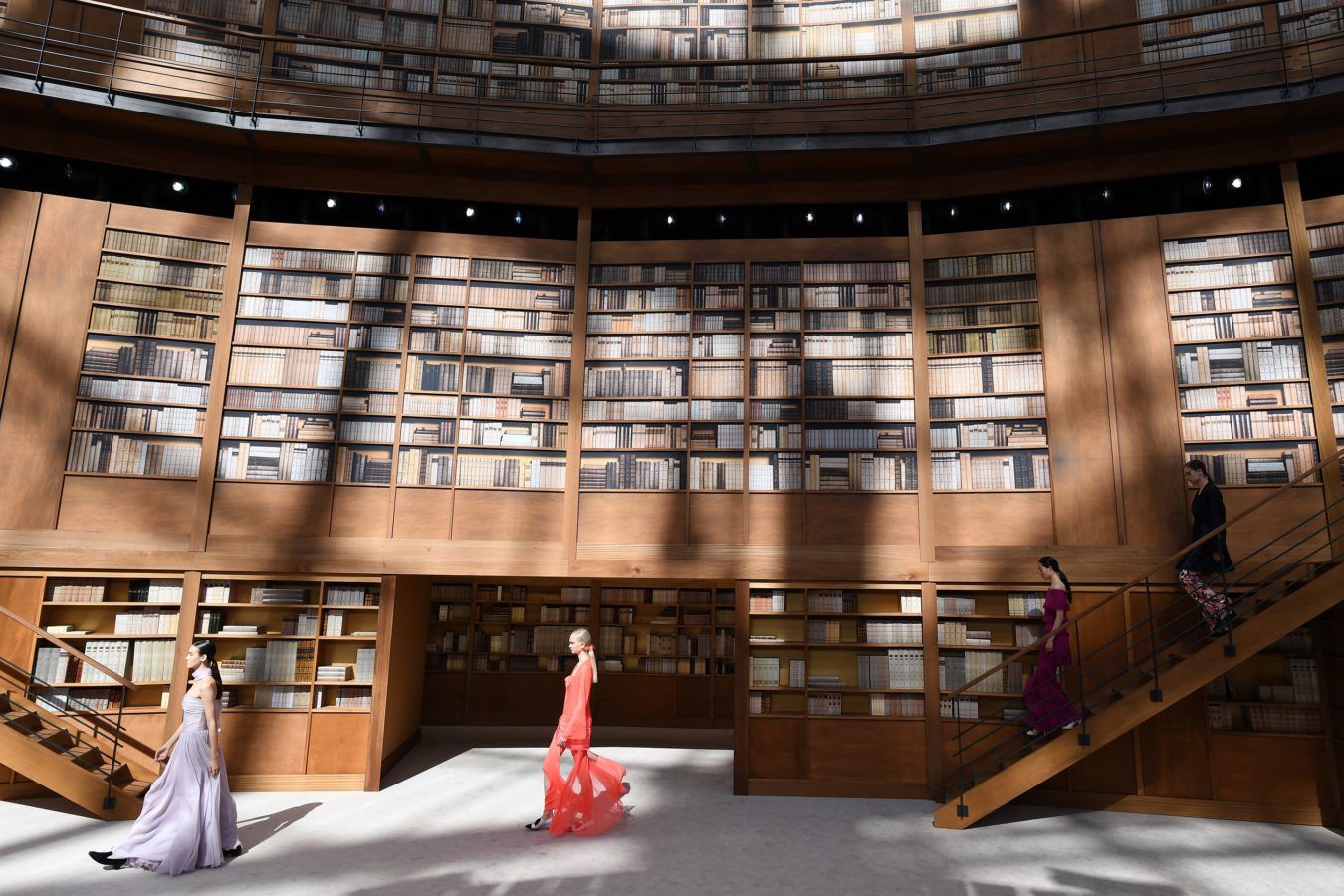 Deeply enmeshed with pop culture, fashion has for years, if not decades, had a parallel and even more intimate relationship with another art form that, like fashion, has long been interested in expressing ideals of beauty.

From Virginia Woolf’s “Orlando” to Jack Kerouac’s manuscripts and Truman Capote’s “Breakfast at Tiffany’s,” we look back at some of the most beautiful love stories between the worlds of fashion and fashion designers and literature.

In early December, Kim Jones chose to present the Dior Homme Fall 2022 collection in London, inspired by the theme of travel, and more specifically Jack Kerouac’s book “On the Road.” It’s not the first time that the artistic director of the French house has been influenced by literature. A dedicated reader, he drew on the work of Virginia Woolf for Fendi haute couture earlier in the year, and in particular looked to the androgynous figure of Orlando for inspiration.

While fashion regularly looks to pop culture, it has never stopped proclaiming its love for the fictional characters of the greatest novels of the past decades or even centuries. Virginia Woolf’s work has also served as inspiration at Burberry, while Givenchy will always be associated with “Breakfast at Tiffany’s,” both the literary and cinematic versions. And of course who could forget Chanel’s haute couture show in the summer of 2019, for which the decor of the Grand Palais was transformed into a sumptuous library.

So what’s at the root of this link, which is far from one-way, between two sectors that are equally similar and contrasting? Thierry Tessier, art historian and expert in the fashions of 1850-1950, helps us understand these strong connections, in the past and present, with a look at the characters and authors who have most influenced couturiers and fashion designers.

What’s behind this powerful connection between fashion and literature?
Fashion draws on trends of all sorts, whether they come from the street, music, cinema or the arts. Literature, particularly legendary books and poems, have always sparked the creative sensibilities of art directors. In addition, fashion criticism has often created links with the arts. So the bridge is established. Moreover, characters like Madame Bovary, Madama Butterfly and many other heroines are familiar to all. To use them as inspiration is to ensure that one’s references speak to and can be understood by the greatest number of people.

Why do literary works always occupy such a large place in the collections of the top labels?
It’s imaginable that luxury brands need to reach the widest possible audience by using topics familiar to all. Whether it’s the Trojan War, the “The Romance of the Rose,” or Stefan Zweig’s biography of Marie Antoinette, these are all platforms for communication. It’s rare that brands are inspired by obscure or offbeat authors. It would be too touchy on an international level and could even send a dangerous message.

Every collection, like every fashion show, feeds off a narrative, but it’s most often linked to pop culture. How did characters from novels become influencers without knowing it?
I think the answer lies in how a fashion show is designed. As you say, the brand and the art director try to create a story. Sometimes they use clichés, often the classics, with a dash of ultra-specific references. Because collections must be able to appeal to different types of audiences. A regular audience, an audience of enthusiasts and an audience of experts. Some will see Disney princess dresses, others will understand the reference to Empress Sissi, and finally the experts will detect the small detail that communicates a very subtle message. Characters from novels, if they are complex, can fulfill this ambassadorial role very well. That’s why art directors choose characters that inspire fantasies, who show psychological development, something that can be discussed.

From Kim Jones to Burberry, Virginia Woolf’s “Orlando” is probably the most influential work on fashion, crossing the decades without aging. Why are so many infatuated with this novel?
Virginia Woolf is a fashion muse. Because of her life, her struggles, her drive, she is a model for many designers. When you are inspired by a character, you get the aura of the writer. If this one resonates with many contemporary struggles, it’s a twofold effect. Hence Oscar Wilde, Marcel Proust, Jean Cocteau and many others…

At a time when gender lines have never been more blurred, can we say that we haven’t heard the last of Orlando?
Indeed, many male art directors are homosexual, and 20% of 15-30 year olds [in France] consider themselves as gender fluid according to [France’s national institute of of statistics and economic studies] Insee in 2021. So the question of gender identity is one of the most important issues for this new generation. Certainly we will continue to come across these authors and characters who evoke these notions. But we could also talk about Aubrey Beardsley, the famous English illustrator, who illustrated the works of Oscar Wilde and who is often referenced in fashion, or Robert de Montesquiou, who served as the model of Joris-Karl Huysmans for the character of Jean des Esseintes in his famous book “A Rebours,” who often shows up on the catwalk in some form.

What fashion pieces have been created under the influence of a literary work?
The first memory that comes to mind is the Proust Ball in the 1970s, where café society gathered under this theme. All the dresses were Haute Couture, it was unheard of. Another that comes to mind is Truman Capote’s Black and White Ball in New York. For the actual looks, I think every year we have designers who are inspired by “Alice in Wonderland” or the tales of the Arabian Nights.

Outside of Virginia Woolf, who are the authors that have most influenced fashion?
Dante, Oscar Wilde, Joris-Karl Huysmans, Jean Cocteau, Truman Capote, Charles Dickens, and Jules Verne.

Chanel was passionate about books, as was Karl Lagerfeld, an insatiable reader, along with Yves Saint Laurent and Kim Jones, to name just a few. Do you have to be a lover of literature, regardless of generation, to become a designer?
These people are all very cultured and they have to understand their generation. In the ’60s, you had to read Françoise Sagan to understand the new generation or Marguerite Yourcenar’s “Memoirs of Hadrian,” which revolutionized literature when it was published. They study, reflect on and examine their lives. They go to the movies, see exhibitions, and search through archives. Absolutely everything feeds them, that’s a fact. They are like sieves of the Danaids that draw from everything.

Kim Jones was inspired by Jack Kerouac for his new men’s collection for Dior, while Chanel has been offering its ‘Literary rendezvous at Rue Cambon’ for months… At a time when gaming and TV series are taking off in fashion, isn’t this paradoxical?
Absolutely not. First of all, the people who buy these labels are not 18 years old, but between 30 and 70 years old, and have therefore been educated through books. Secondly, it is always an opportunity to create a link between the brand and the customer, to justify the often excessive price by providing a unique customer experience — a speaker, an author, an expert who will explain the text to you. Finally, educating customers is an opportunity to demonstrate proof of the label’s excellence. It’s all about marketing. Not sure if it’s just for the beauty of the art. Let’s not forget that fashion is not an art. It is classified in industry. One can take offense to this, but Chanel never proclaimed herself an artist. She was a businesswoman who understood her generation very well and knew how to draw from the epiphenomena around her that were indicative of major trends.

This interview has been translated from French and is published via AFP Relaxnews.