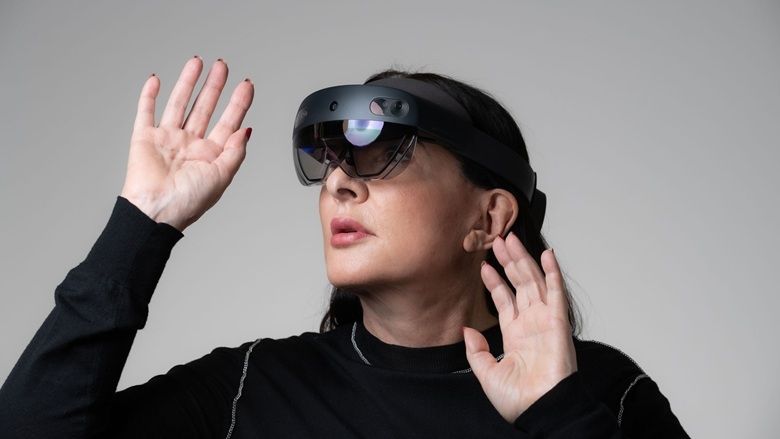 In what amounts to something of a milestone in the art world, for the first time ever Christie’s is to sell a mixed reality artwork at auction. The piece in which the highly regarded Serbian-American performance artist Marina Abramović appears as a hologram to question the concept of immortality will go under the hammer on October 22.

“The Life” was presented for the first time in February 2019 at the Serpentine Galleries in London, where visitors wearing Microsoft HoloLens smartglasses were able to observe the multiple comings and goings of  a virtual reality Marina Abramović in an invisible circle with a radius of approximately five meters.

It should also be noted that the hologram wore the same red dress that the Serbian-American artist used for her “The Artist is Present” performance, which attracted close to 850,000 visitors to the Museum of Modern Art in New York over a period of three months in 2010.

“The very essence of performance”

The production studio Tim Drum used 30 cameras to meticulously recreate every detail of the movements of Marina Abramović for “The Life.” Unlike virtual reality works, “The Life”, which is mixed reality, allows viewers to continue to see the real physical space that surrounds them while interacting with an ultra-realist hologram of Marina Abramović.

“Working with this new technology and finding out its endless possibilities — because we are talking about something that really captures performance in its essence — was for me revolutionary,” explains Marina Abramović in a video about the work.

Having revealed in December that the “The Life” would be put up for auction with a reserve price of 600,000 pounds (around US$775,000), Christie’s recently announced that it would offer free access to visitors wishing to see the work in its London gallery from October 8 to 22.

A work that has attracted accusations of satanism

Although Marina Abramović has long been a polemical figure, her works have rarely sparked as much controversy as “The Life.” In April of this year, Microsoft pulled an advertisement for HoloLens in which the Serbian-American artist spoke about the mixed reality work. According to Artnet News, large numbers of internet users had complained about the video in the wake of an article on the InfoWars blog of American conspiracy theorist Alex Jones. The piece discussed the accusations of satanism which have targeted Marina Abramović since 2016.

This story was first published via AFP Relaxnews.
Auction Christie's art and culture