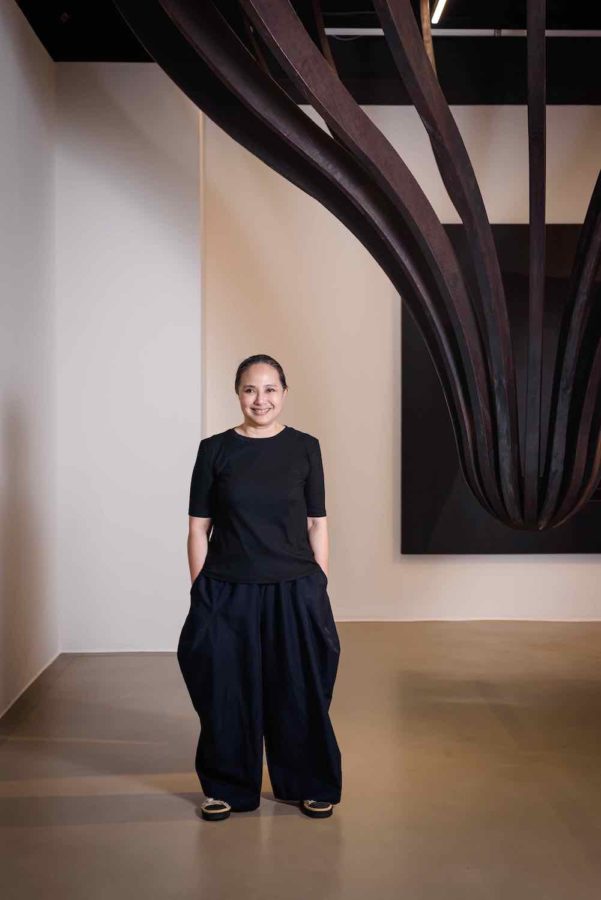 Pursuits
Conversations: Pinaree Sanpitak Discusses Her Most Recent Exhibits, and Her 35-Year Career
Share
Next article

Thai artist Pinaree Sanpitak, well-known for her voluptuous artworks that blur the line between the sacred and the sensual, chats with Prestige about her two most recent Bangkok exhibits, as well as her upcoming monograph chronicling her 35-year career.

During the month of November 2020, renowned Thai artist Pinaree Sanpitak had not just one, but two major solo art exhibitions at two of Bangkok’s most esteemed galleries. And although the shows ran concurrently, and both galleries are within a veritable stone’s throw of each other, the exhibits themselves were wildly different in terms of scope, content, and presentation. However, at their core the two shows shared a common bond in their mutual exploration of the breast/stupa theme, which has been Pinaree’s artistic trademark for almost two decades now. Sanskrit for “heap”, the stupa is an important form in Buddhist architecture, most often a place of burial or a receptacle for religious objects.

“It’s a simple concept of combining the sensual and the sacred,” Pinaree explains over afternoon coffee and treats at Nova Contemporary gallery. “It’s something to kind of expand your perception. People ask if I ever have problems, as the idea is somewhat taboo, but I’ve been doing it since 2001 and I’ve never had any problems. It’s quite abstract, also.”

Interestingly, the coffee and baked goods we tuck into are actually part of the art exhibit itself, the full title of which is ‘Breast Stupa Cookery: The World Turns Upside Down’. It ran from October 10th till November 21st, and during that period visitors to Nova were invited to buy coffee, tea, snacks, and ice cream while taking in Pinaree’s several large works on canvas, a pair of curvy wooden installation sculptures she’d made from reclaimed Thai wood, and two tables and a shelf filled with buxom bowls and plates – in ceramic, glass, and wood – each of which makes reference to the shape of the female breast. 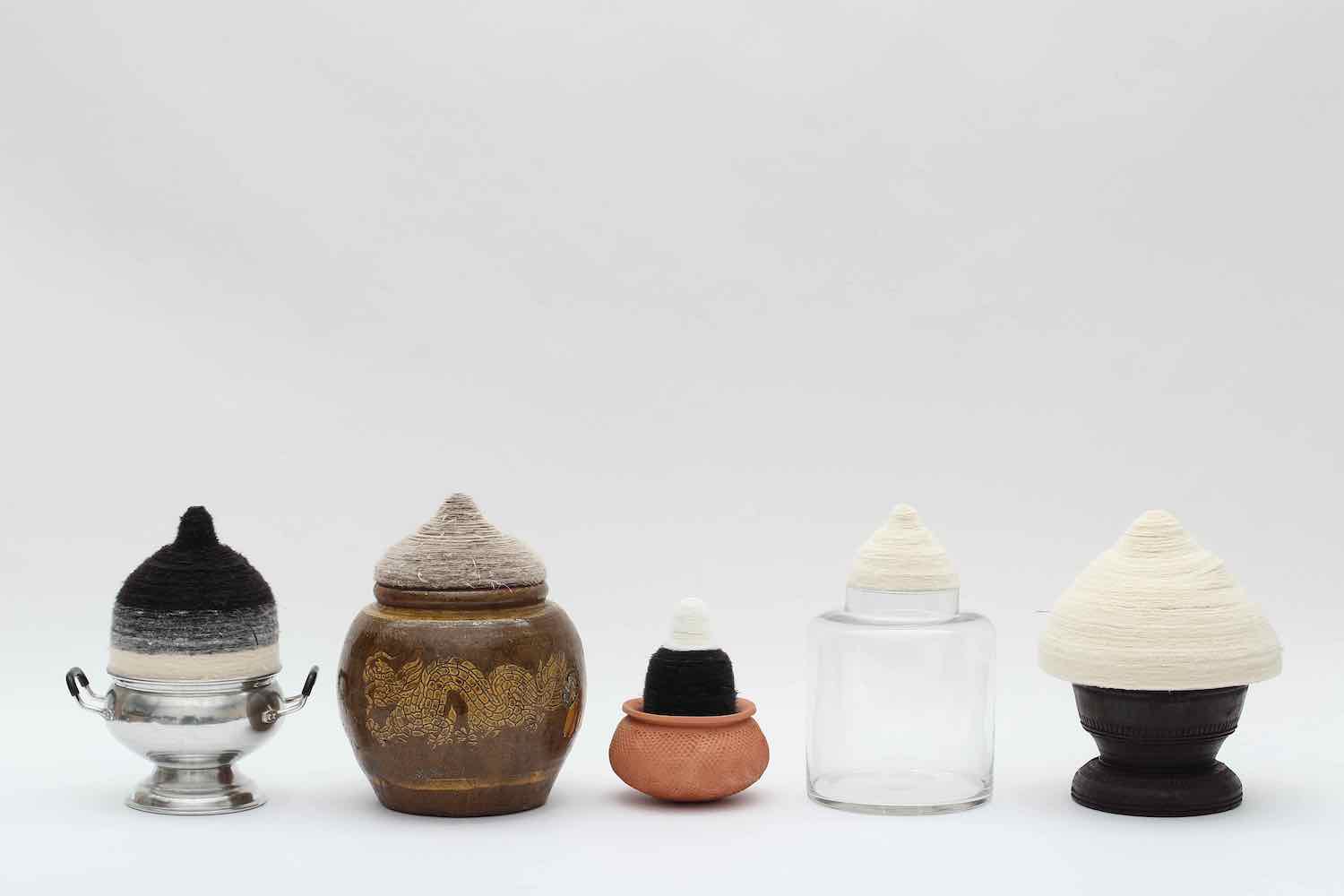 “I didn’t want to just show paintings and sculptures. We wanted to transform the space. I love collage work, and when I install things like this it’s kind of like a collage. I like to challenge the materials and challenge the space also,” she tells me, adding that it took some gentle convincing to get Nova to accept her vision of an art installation with café. “We talked about this concept before Covid, actually. And then after Covid we felt people were ready to come together again. We need that connection, and that’s the intention of the project.”

As for the individual bowls and plates, some are from Pinaree’s own collection she’s amassed over the past 15 years or so, while others have been contributed by various artists, all of whom interpret her breast as stupa theme in their own way. As for the fresh baked goods, Pinaree herself made the yummy almond butter brown cookies, using a shapely mold, while sweet specialists such as Mad Sugar, Tokyo Hot, and Yora – the new dessert joint from 80/20’s chef Saki Hoshino – have interpreted the breast/stupa idea in a number of deliciously different ways.

“We’ve had some big groups coming,” Pinaree remarks when I ask her about the show’s attendance. “Interestingly enough, the gallery’s had visitors who have not been to contemporary art shows before, but they came for the food, as they follow these chefs.” Along with the daily café items, Nova gallery also hosted three special gourmet sit-down dinner evenings, as well as a wonderful opening party catered by Saki and her chef husband Napol “Joe” Jantraget (showcasing items from their new nam prik brand Krok).

“For me it’s a solo show, but it’s also very collaborative,” she reflects. “At its core is about making friendships and relationships. It also enabled me to expand and get out of this small world of the contemporary art scene. And what’s better than connecting with food?”

Pinaree’s other exhibition that debuted in November is entitled House Calls, and it continues until April 4th, 2021, at the recently relaunched 100 Tonson Foundation. Here, the artist transforms the gallery space into a kind of domestic living area, with multiple shelves of household objects – vessels, containers, and utensils – all adorned in some way with a breast as stupa moulding, fabricated from stacked – no pun intended, I assume – torn paper. The concept evolved from an earlier installation, part of the 2019 Setouchi Triennale, which was staged in a traditional house on a remote island in Japan’s Seto Inland Sea.

“I stacked the paper in the same manner, but on these kinds of wooden stilts, and placed them in the tokonoma which is the area of the tatami room in a Japanese household where you normally put art objects. It was an homage to the craft masters,” she says, adding that one of the special Japanese papers she likes to use can no longer be had, as the master papermaker has since passed away.

She later had the idea to add paper breast stupas to different items and curios around her house to give them an alternate context. The idea truly gelled when Covid came along, and the house became a sort of prison/refuge, depending on your perspective. “That’s why I named it ‘House Calls’, because the house is calling,” she points out. 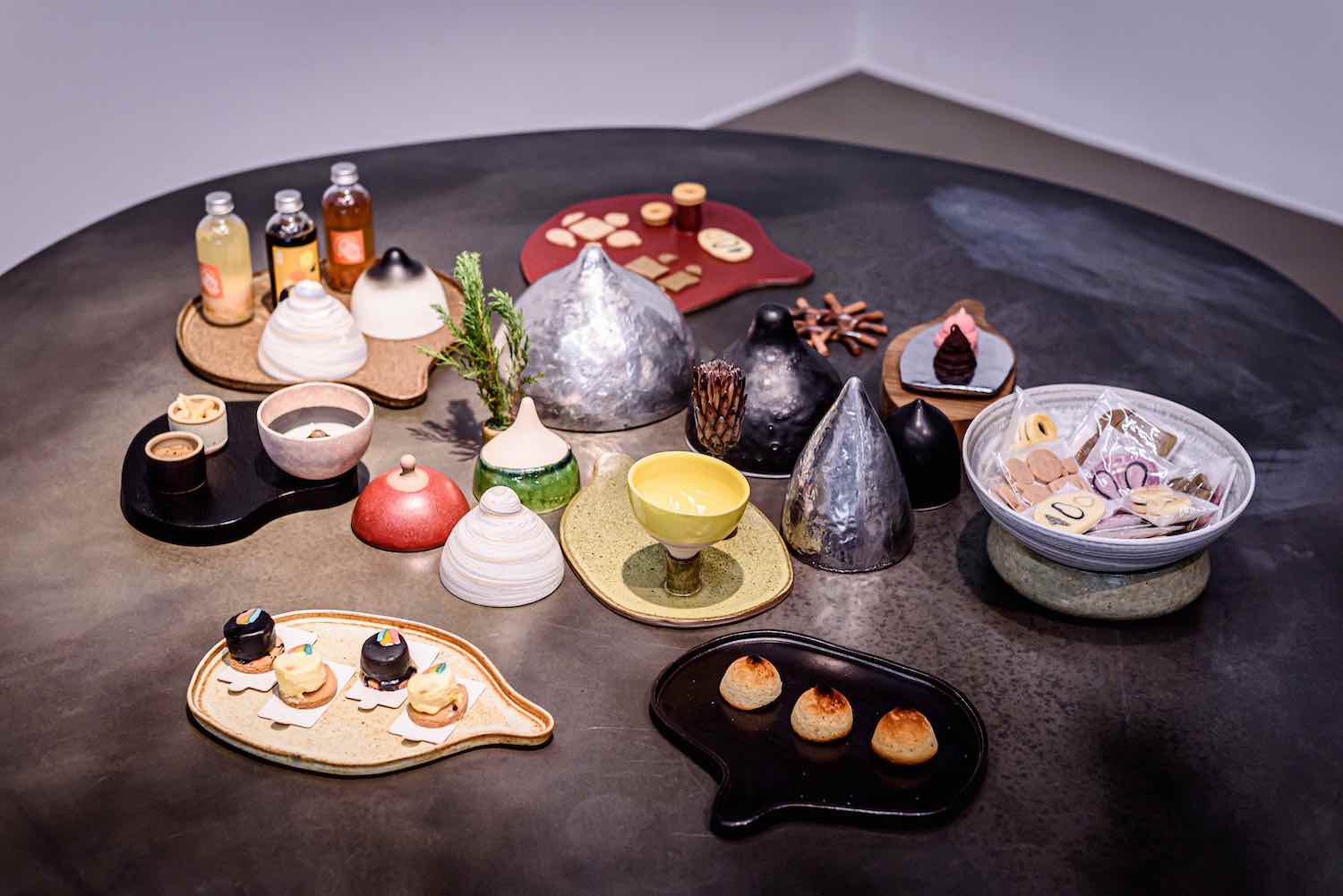 Altogether there are almost 400 separate items on the shelves – “Counting every teacup,” she chuckles – and the metal shelving units themselves are made with extended metal bases designed specifically to cause the shelving, and thus the objects, to shake when viewers walk past (like when walking on a springy wooden floor in an old house). But the real labour is in the creation of the stupa domes themselves.

“It’s paper, hand-torn one by one, sheet by sheet. I have five assistants helping me,” she says, adding that her team uses different types and colours of paper, which Pinaree has collected from Japan, Vietnam, Korea, Laos, and Thailand.

Each month during the show’s extended run, the foundation will offer various public programmes, including artist and curator walkthroughs, a webinar lecture series with Asian Art Museum, San Francisco, a maa-lai (garland) making workshop led by the artist, storytelling sessions for kids, and a performance workshop with invited artists portraying their interpretation of Pinaree’s installation. Things conclude with the publication of the artist’s career-spanning monograph – scheduled to take place on March 27th, 2021 – which showcases her body of work over the past 35 years.

“It’s about 600 pages,” she reveals, “with images of my work and essays by different writers, but all in English. I’m going to be 60 next year, so I just wanted to gather my thoughts and look back on what I’ve done.” 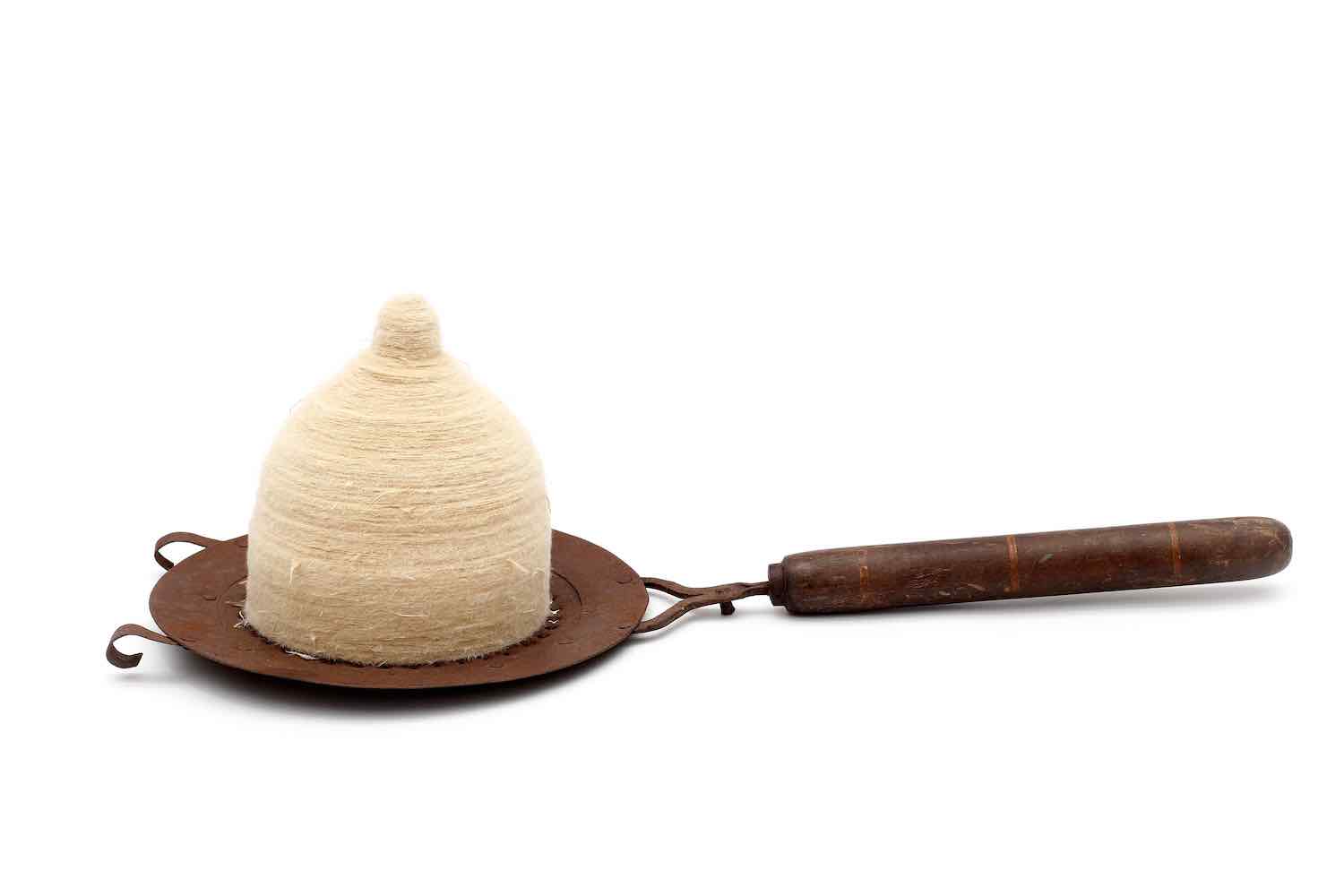 It’s a life and career that began in Bangkok, where Pinaree was born, but her childhood years were mainly spent in Chiang Mai, Khon Kaen and, briefly, Chicago, where her mother completed her PhD in biochemistry. “In my last year of high school I went to the USA, as an exchange student. Kansas City, class of 1980!” she giggles.

She returned briefly to Bangkok but relocated to Japan for her undergraduate studies when she qualified for a scholarship that included one year of language studies and four years of college at Tsukuba University.

“I stayed on for almost another year after I finished,” she says. “I came back [to Thailand] about 1987. I had no idea what I was going to do, but I did know that I had found my way of expressing myself through art.”

A number of years later, she hit upon the beginnings of the theme that would define her work for the next two and a half decades. “The first breast works came out in 1994, two months after I gave birth to my son [Shone Puipia, now a successful fashion designer]. He’s always the milestone. He’s 27 now,” she laughs.

“I stuck to it, and the idea grew and evolved with me,” she continues. “Breast Stupa – when I coined the two words together – started in 2001, with an installation in which I pulled threads out from a perfectly woven piece of silk hanging. It was first shown here in Bangkok. Before 1994 I did a lot of collage, and abstract works, based on the female experience, about myself. Looking back, I can see the progression.”

Before we part ways, I turn the tables slightly, asking Pinaree if she thinks it’s possible that the shape of the stupa was originally – all those eons ago in our long distant past – actually inspired by the breast itself.

“Yep, I think so,” she muses. “It’s a very natural form, pointing upwards like the mountains. It’s also where things are nurtured.”