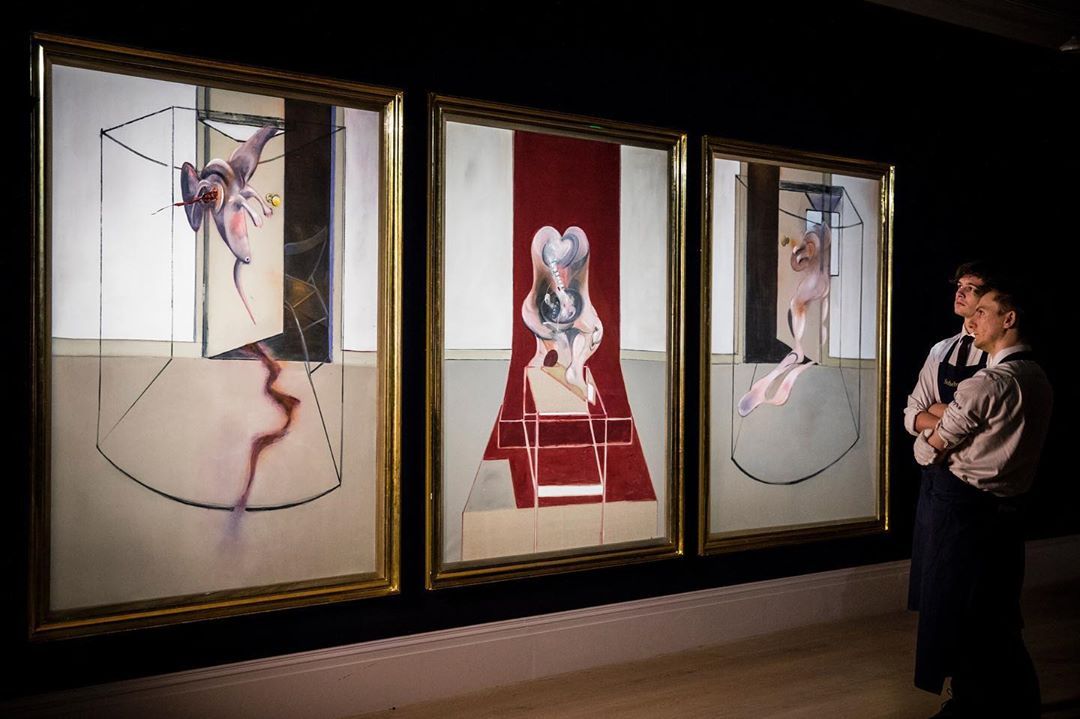 Sotheby’s unprecedented series of three auctions, conducted remotely as a virtual sale by auctioneer Oliver Baker in London, generated an impressive total of $363.2 million on June 29.

Ninety-three percent of the lots on offer went under the hammer across the carefully choreographed auctions, namely the evening sale of Contemporary Art, the evening sale of Impressionist and Modern Art, as well as a single-owner sale of works assembled by the late influential collector Ginny Williams.

Stretching over four-and-a-half hours, the marathon session was led by Francis Bacon’s “Triptych Inspired by the Oresteia of Aeschylus” (1981), which went for just over its pre-sale high estimate of $80 million and fetched $84.6 million with fees.

While this pricey sale was not exactly surprising, eight new auction records were set over the course of the sales. Among them are Helen Frankenthaler’s “Royal Fireworks” (1975), which nearly quadrupled its pre-sale low estimate of $2 million and achieved $7.9 million during the Ginny Williams Collection Evening Sale.

The previous auction record of the late American Abstract Expressionist was set in May 2018, when “Blue Reach” fetched $3 million during Sotheby’s Contemporary Art Day Auction. The late Canadian artist Matthew Wong also blew past his former record price of $62,500 during Sotheby’s Contemporary Art Auction, as “The Realm of Appearances” (2018) went under the hammer for $1.8 million after heated phone bidding via specialists in Hong Kong and New York.

While “The Realm of Appearances” realized more than 18 times its pre-sale high estimate of $80,000, Vija Celmins’ “Night Sky #7” did not hit the auction block for $8 million, as expected by Sotheby’s specialists. The large-scale canvas, recently featured in the Latvian-American artist’s retrospective at the Metropolitan Museum of Art, still surpassed her previous auction record of $4.2 million and sold for $6.6 million.

Elsewhere during Sotheby’s marathon session, Jean-Michel Basquiat defied expectations with “Untitled (Head)” (1982), which sold for $15.2 million and set a new world auction record for a work on paper by the American artist. The masterwork also marked the highest price ever paid at Sotheby’s by an online bidder, surpassing the $7.9 million spent on Joan Mitchell’s “Garden Party” (1962) earlier in the evening.