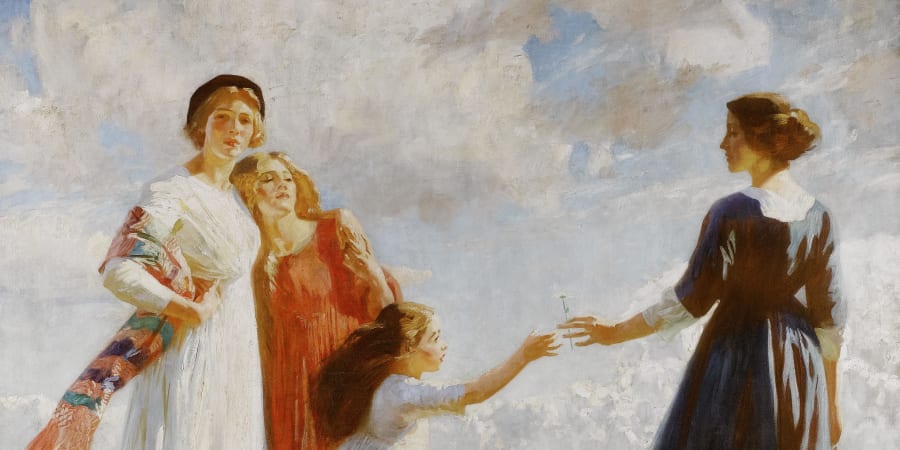 Slowly but surely, the art market is giving more importance to works created by women. The latest proof: Sotheby’s is holding an online sale next month dedicated exclusively to women artists. One way to give them some of the spotlight they deserve in the history of art.

Linda Nochlin started a revolution in the art world when she published her seminal essay, “Why Have There Been No Great Women Artists?” in 1971. Half a century later, the question unfortunately still seems relevant. And for good reason: works created by women account for less than 4% of global auction sales, according to a study recently published in the Journal of Cultural Economics.

Sotheby’s hopes to remedy this discrepancy with “(Women) Artists,” an online sale dedicated to women artists to be held May 20-27. It will honour the “personal stories” of female creators who lived through the past four centuries, as well as their “contributions to art history.” “Many of the female artists we are offering here were well known and respected within their lifetimes, but history has not treated them kindly. They have come to be remembered as the wives of painters, as the ones that enabled their husbands, fathers and brothers to paint or as their muses, but rarely ever as they deserved to be: the artists in their own right!” outlines Lisa Stevenson, Impressionist & Modern Art Specialist, Sotheby’s London.

Too often in the shadow of their husbands

This is notably the case of the American Surrealist Dorothea Tanning, whose creations have long been overshadowed by those of her husband, Max Ernst. As proof: her record sale is currently 1.2 million dollars while that of her husband is close to 16 million dollars. Dorothea Tanning railed against such inequalities throughout her life, even declaring once: “I never heard him [Ernst] use the word “wife” in regard to me. He was very sorry about that wife thing.” Her painting “The Witch” will be up for auction during the “(Women) Artists” sale, where it could fetch up to 320 000 pounds (around 445 000 dollars) according to Sotheby’s estimates.

But not all of the artists honoured by the auction house were relegated to the background during their lifetime. The 17th century Dutch painter Rachel Ruysch, for example, enjoyed a much greater reputation than her husband, Juriaen Pool. In fact he put an end to his career in the face of his wife’s talent, but she continued to paint until she was 80 years old. And this, despite the fact that she gave birth to ten children. One of her compositions, entitled “Forest floor still life with a pool,” will go under the hammer in May at Sotheby’s, where it could be sold for between 150,000 and 200,000 pounds (approximately 208,400 dollars and 278,000 dollars).

A new enthusiasm for the work of women artists – but at what price?

In recent years, many initiatives have been launched to give more importance and credit to the contributions of women artists in art history. This has been a long process, but it is beginning to bear fruit: auction prices for works by women artists have increased by 32% in the last five years, according to The Art Newspaper. But women artists continue to be undercut by their male counterparts. Only a handful of women artists are listed in Artnet’s ranking of the most successful artists at auction in 2020.

Sotheby’s is aware of these gaping disparities. “The divisive classification ‘women artists’ but never ‘male artists’ is at the heart of a debate that has been disputed for decades, and yet continues to be a trap that is so often fallen into. Female artists should not be pigeon-holed nor segregated, which is precisely why we are holding a sale that appears to be doing exactly that – in order to turn the tables and open up this debate. Yes, these artists are women, but more importantly, they are artists,” states Marina Ruiz Colomer, Contemporary Art Specialist, Sotheby’s London.

This story was published via ETX Daily Up.