Behind the Scenes with Bonhams’ Global Head of Indian, Himalayan & Southeast Asian Art 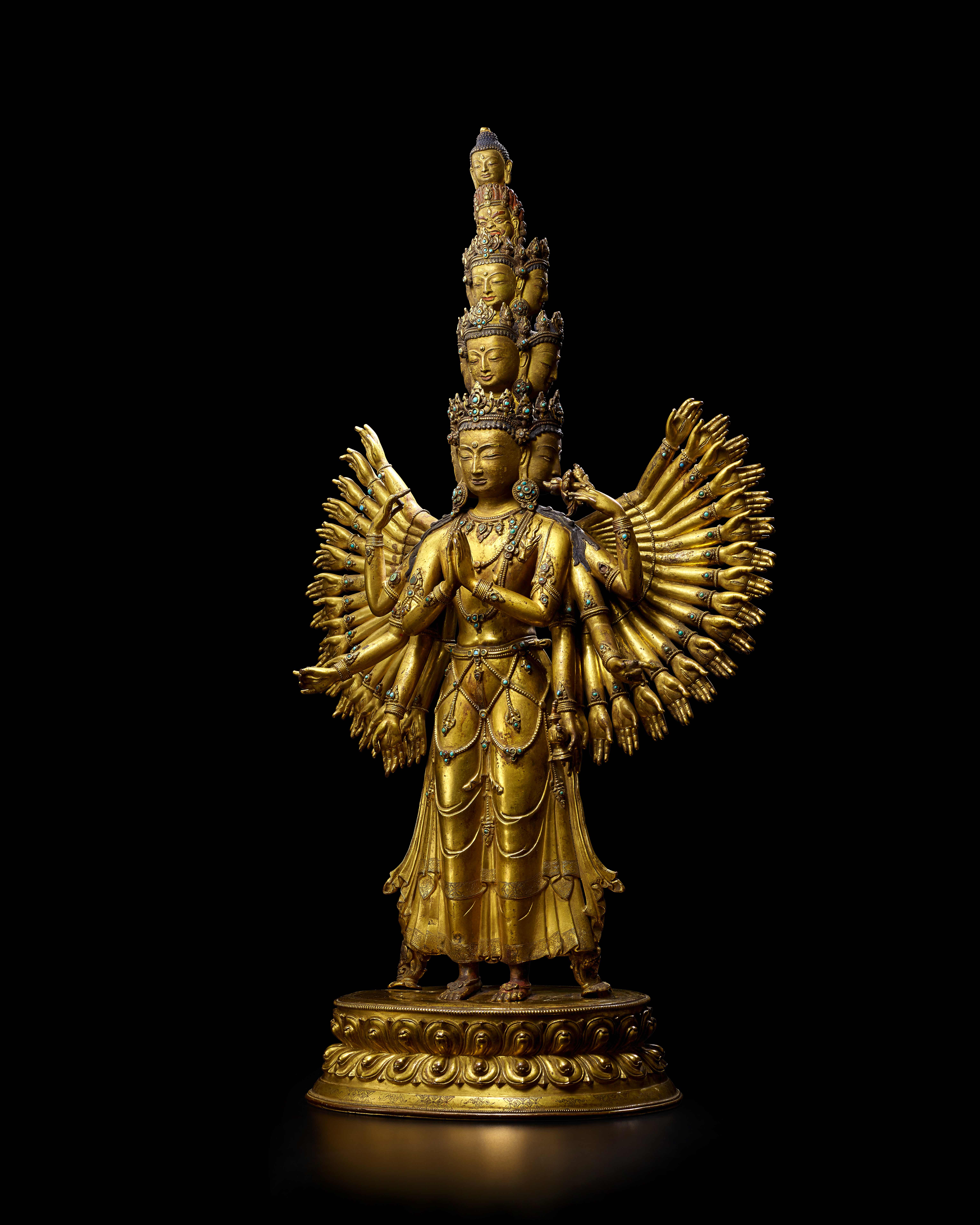 People often ask me how I go about sourcing and verifying the provenance of items that we put up for auction. And after 30 years and more auctions than I care to think of, the mission of consignment often takes me on a journey of discovery that I have built over the years through endless patience and a network of trusted contacts.

Never has this been truer than in my most recent discovery for our auction of Indian, Himalayan & Southeast Asian art in New York on March 19, when I came across an extremely rare find in the form of a Tibetan gilt copper alloy figure of the Avalokiteshvara of Sahasrabhujalokeshvara. No, it’s not a typo, and I know it’s quite a mouthful – one that has taken me years to master. He, in fact, represents the bodhisattva (Buddha-to-be) of infinite compassion and mercy – possibly the most popular of all figures in Buddhist legend and the most beloved.

I first came across this particular multi-limbed sculpture in 1999 through a book written by one of the most highly regarded scholars of Buddhist art, Ulrich von Schroeder (Indo-Tibetan Bronzes, 1981). Then, I had the rare opportunity to see it in person in 2015 within a private collection, and the same owner has finally entrusted me to offer it for sale.

Through my team’s research on the piece, a chance discovery revealed its details had also been published within an Apollo magazine advertisement in 1968, at a time when Tibetan art was rarely promoted. This discovery added a further layer of provenance on top of the 1981 publication and its last appearance at auction in 1977. With the provenance assured, we were left with one last piece of the puzzle – the inscription.

Although not critical, precise dating can be a part of the riddle to determine the rarity and value of a piece accurately. However, the inscription around the top of the base had never been translated, and while most inscriptions are related to dedicatory prayers, there was a chance that more information may lay hidden in the ancient script. What we have revealed in the inscription is not only a defining milestone in my career as an auctioneer but also a moment in history for all Tibetan scholars.

We have managed to translate the inscription around the base:

“This source of the attainments of Lord Avalokitesvara, requested by the bodhisattva Zhonnu Gyalchog, through the relatives of the ruler Norzang Palzang, with pure motivation to build a place of worship for noble beings, [then, this sculpture was made] by the hands of Sonam Gyaltsen. May the accumulation of merit lead all beings to quickly attain the omniscient stage.”

“Norzang” here refers to Norbu Zangpo (1403-1466), the first monarch of the Rinpungpa regime, which dominated western Tibet and part of Ü-Tsang, one of three traditional provinces of Tibet, between 1435 and 1565. Norbu’s brother Palzang was a student of the famous Sakya master, Zhonnu Gyalchog, who was born in the 14th century. The three figures founded a monastery called Jamchen Chode in Tsang province around the year 1430, and it is likely this sculpture was commissioned for the dedication of the monastery; allowing us to date it to the same period with confidence.

The artist responsible for creating this sculpture has also been identified. Although Sonam Gyaltsen is a common name, we can now bring his body of work to light through this breakthrough. A number of sculptures in the Rietberg Museum in Switzerland, an important Guhyasamaja in the Qing Palace Museum collection, as well as the many pieces held in private collections, can now be dated and attributed to the artist and his atelier.

The next chapter of this sculpture will be decided as the sculpture goes under the hammer with an auction estimate between US$1 million-US$1.5 million. This may well not be the end of my journey with this piece as I set about once again on my next consignment mission.