Discover Some of the World’s Tallest Skyscrapers with Breathtaking Views Once upon a time, skyscrapers were places of commerce, home to floors and floors of offices and perhaps the occasional hotel — but, oh, how things have changed.

Across the globe, an ever-growing crop of super tall residential towers is on the rise, as leading developers, architects and designers collaborate on projects that simultaneously transform city skylines and property markets with record-breaking heights and prices.

These days, in cities like New York, Dubai and Moscow, wealth and status go hand in hand with extreme elevation as towers top out at astonishing heights that wouldn’t have even been possible a few years ago. Growing in popularity around the world, these staggeringly tall feats of engineering are only expected to multiply in the years ahead, catering to superrich buyers with a taste for owning the best views money can buy.

For a taste of the high life, here’s a look at the 10 of the world’s tallest residential skyscrapers in the world — for now, at least. 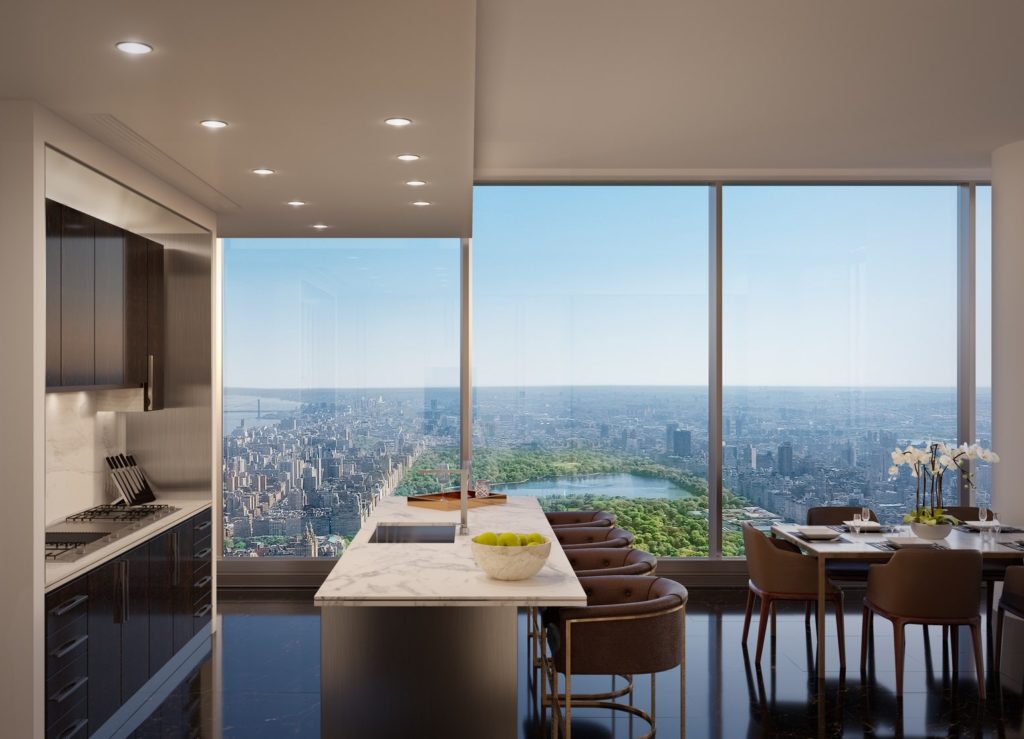 Officially the tallest residential building in the world, Central Park Tower is also the second-tallest structure in New York City behind One World Trade Center — hence the unobstructed 360-degree views. Located on a strip of exorbitantly priced properties known as Billionaire’s Row, the tower has 179 units estimated at a collective US$4 billion, making it the most expensive condominium project in the United States. 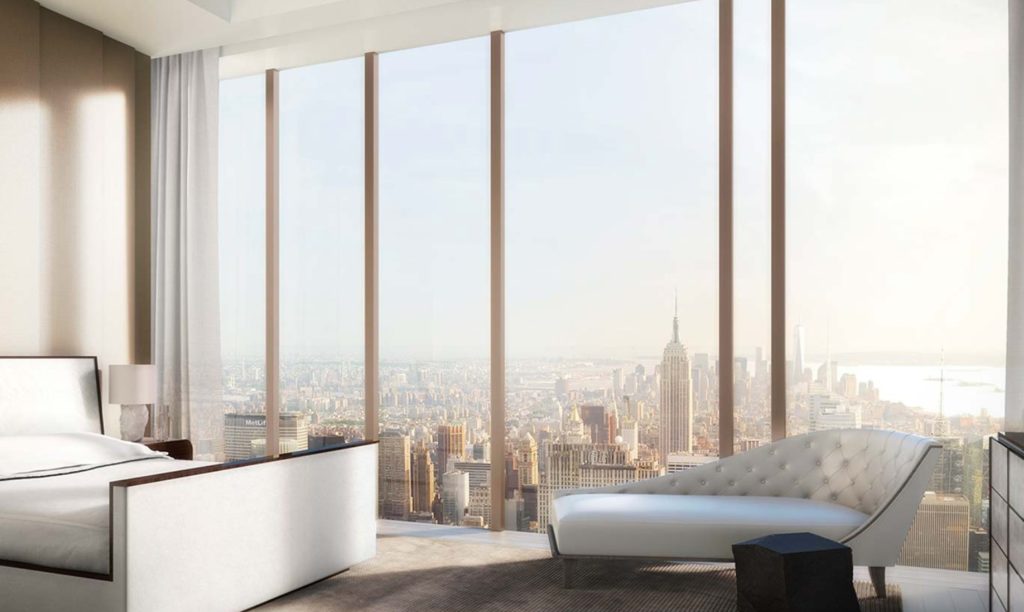 You don’t have to look far for the second-tallest residential skyscraper: It’s Central Park Tower’s neighbour on Billionaire’s Row. Also known as Steinway Tower, 111 West 57th Street stands out for being skinny — it’s only 60 feet wide. Positioned to perfectly align with the centre of Central Park, the building currently has two 7,130-square-foot penthouses on the market, priced at a cool US$66 million each. It wasn’t long ago that 432 Park Avenue was the tallest residential building in the world — a position it held for five years — but it’s no less stunning now that it’s in third place. Designed by Rafael Viñoly, the tower is an exercise in simplicity and geometry, with six windows each measuring 10 by 10 feet lining each side of the building on every storey. The building’s’ developers benefited from completing the project during better economic times: the 96th-floor penthouse fetched US$86.77 million in 2016. Standing 101 storeys tall, Princess Tower is located in the centre of Dubai Marina and previously held the title of world’s tallest residential tower from 2012-2015. Housing a staggering 763 units — from one-bedroom apartments to five-bedroom penthouses — the tower is located opposite the Dubai International Marina Club and even features an observation deck on the 97th floor, where residents can look out at the glittering skyline. Prior to the completion of neighbouring Princess Tower, 23 Marina had the distinction of being the world’s tallest residential skyscraper. Its 289 apartments are spread across 88 floors, where residents enjoy views of the Dubai skyline or the manmade island Palm Jumeirah. Even in a city of stunning skyscrapers, 23 Marina stands out with its unique geometric designs, including an octagonal shape and triangular spires. The tallest building in Abu Dhabi, 92-storey Burj Mohammed Bin Rashid is located on The Corniche, an 8-km road with cycling area, pedestrian pathways and Corniche Beach; the tower itself is connected to the World Trade Center. The tower holds 474 units, and amenities include spacious balconies overlooking the beach, a 90th-storey gym, a children’s play area and an indoor terrace garden. 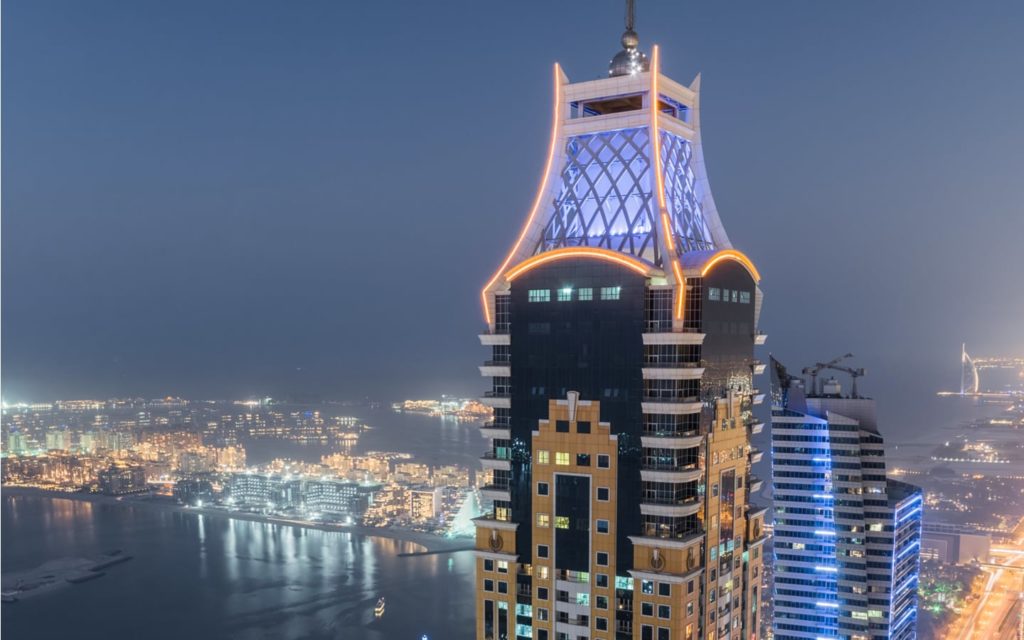 Yet another super tall structure in the Dubai Marina skyline, Elite Residence has 703 residential units including one- to four-bedroom apartments, three- to four-bedroom penthouses and one palatial five-bedroom penthouse occupying the top floor. There’s plenty to keep residents busy: a fully equipped gym with views of Palm Jumeirah and the beach, a tennis court, two indoor pools, one outdoor pool and a sundeck. Like many other buildings before it, The Torch was once the tallest residential tower in the world. At 84 storeys high, it’s still a juggernaut, one with 682 units to boot. Views are sensational from the apartments as well as from the large outdoor pool and private deck overlooking the city and the entire length of Dubai Marina. In case you were thinking that all of the world’s tallest residences are either in New York City or the Middle East, it isn’t true. The taller of two apartment buildings forming a sumptuous complex, Neva Towers 2 is located in the centre of Moscow and is the first eco-friendly building in Russia to be granted LEED certification. Residents have access to a spa, fitness centre, private cinema, squash courts and a private park with a panoramic pool. Part of a three-building complex comprising one commercial tower and two apartment buildings, LCT The Sharp Residential Tower A is the slightly taller of the latter pair. Aside from being the tallest residential building in South Korea, it’s the third-tallest building overall in the country and its 85 storeys on the waterfront afford residents unbeatable views of the city and the sea.