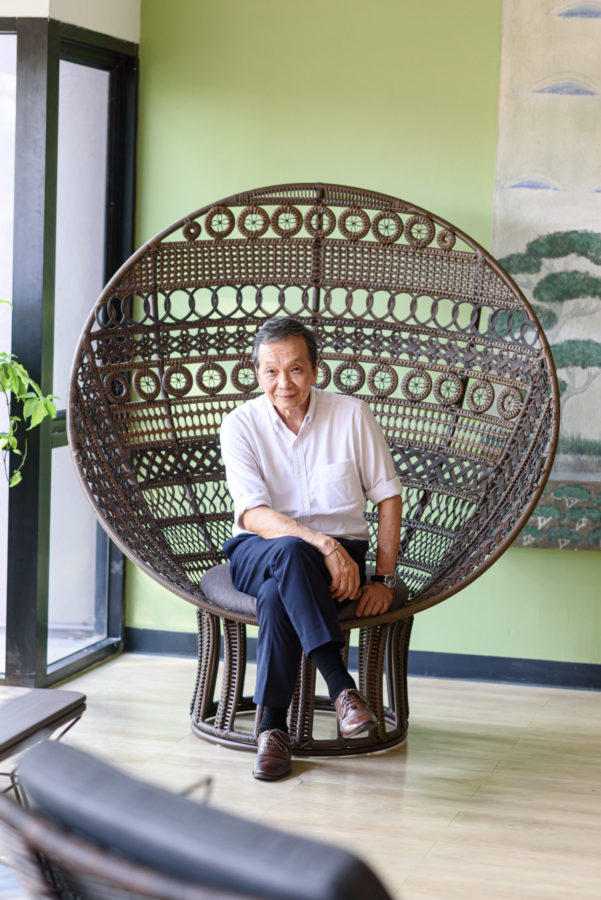 Can a chair be considered art? Most people would agree, but that doesn’t mean they’ll always treat it as such. Earlier this year, Suwan Kongkhunthian was the featured artist in a Bangkok Design Week exhibition held at Bangkok’s ATT 19 gallery, where dozens of handcrafted chairs made by his company Yothaka were on display. Unfortunately, due to the onslaught of crowds, organisers had to put up signs asking people not to sit in them.

Imagine my elation when I met Kongkhunthian in person a month later at the Yothaka showroom on Rama IV Road, where all his chairs are ready for testing.

The real truth, I soon discovered, was that I had actually encountered his designs before. In Thailand, his chairs are found in many high-end hotels, including the Grande Centre Point Sukhumvit 55 in Bangkok, and Four Seasons Resort Koh Samui.

Across the globe, his pieces can be found in Italy – most notably at Fendi Casa, Roda and Cassina – as well as in locations as wide-ranging as Paris, Prague, Dubai, Kenya and even Siberia. It’s a success story that started back in the late 1980s when Yothaka became one of the first Thai companies to break into the international furniture market.

These days, the energetic 70-year-old managing and design director of Yothaka has an illustrious career to look back on, but furniture design was not even remotely his focus when, as a young man, Kongkhunthian moved from Chiang Mai to Bangkok to attend the Academy of Fine Arts, and later Silpakorn University.

“After I graduated, I went to Saudi Arabia for a year and a half. I worked as a foreman, translating architectural drawings for the skilled Thai workers that were building the King Faisal University in Hofuf. After that I went back to Thailand and worked for a company that supplied furniture to a Scandinavian brand,” he says.

During that time, he was commissioned to come up with a design for the Köln Furniture Fair, which ended up winning an award. But by the time the good news reached him, he had already resigned and was working in Singapore at his own interior design firm.

After 11 years outside of Thailand, he returned home at the behest of his friend and former classmate ML Pavinee Santisiri, who had been involved in a charity project to encourage underprivileged communities to make furniture from water hyacinth, a free-floating aquatic plant with submerged roots that grows in abundance in Thailand’s waterways. “They were the first group in the world to try this. Before, Thai people used water hyacinth to make baskets, and as food for pigs. After the project ended, Pavinee encouraged me to have a look at what they’d done. I said, ‘I like it very much, it’s so beautiful’, and so she asked me to set up a company with her.”

Yothaka International was officially launched in 1989, pioneering the use of water hyacinth to craft designer furnishings catering to an upscale clientele. The company found an eager market of buyers outside of Thailand, primarily in Europe. At that time about 95 per cent of their output was exported, to almost 40 different countries.

The water hyacinth stems are collected into bunches, and one bunch contains about 30m of the material. At the time of its peak production, Yothaka was using at least 20,000 bunches per month. “You have to choose water hyacinth from an area where the water is flowing. If it’s growing in still water, the stem will turn dark brown, whereas the stems from plants in moving water will turn gold,” Kongkhunthian explains.

From a design perspective, it didn’t take long for him to give the furniture – which was then and remains today primarily chairs – both a technique and an artistic style that was recognisable as his own. “People say I’m an Oriental designer. I love everything about this culture – not just Thai, but also Chinese, Arabian, Middle Eastern and so on. I love Oriental design and there’s always a spirit of Asia in my work.”

“We don’t have high-tech machines to produce furniture, but what we have is high skill,” he continues, adding that his factory in Pathum Thani employs 75 artisan craftsmen. “The raw materials are produced by machines, but in my factory we have only skilled labourers. And we have a teacher in the factory to train others. He’s worked with me for a very long time and he understands my language of design.”

Some of Kongkhunthian’s most identifiable chairs include: the Lunar, an intricately detailed piece in which the high and wide circular chairback envelops the sitter; the YZY, which is currently in use at the Louis Vuitton store at IconSiam; and the Savannah, whose curly armrest supports resemble fiddlehead ferns, and whose arresting pattern design incorporates a distinct graphic art sensibility. “I wanted to make this chair like a fashion item. I played with black and white. It’s very striking.”

This particular design has definitely found more than a few fans, including renowned hotel designer Bill Bensley, who specifically requested the Savannah chair for Shinta Mani Wild, his most recent hotel project in Cambodia. “He saw it in black and white, and said, ‘Can you change the colour for me to yellow and green?’”

Apart from his chairs’ beautiful design, there is a sustainability factor that makes this company’s furniture doubly attractive. Most of it is made using natural materials such as water hyacinth, cane, wicker, wood and rattan, but Kongkhunthian and his team also blend eco-sensitive synthetics and other elements into certain pieces. “Even though it’s not all natural, the material has to be environmentally friendly,” he says, pointing to a chair in the showroom and explaining that the metallic base is aluminum, which is among the most eco-friendly metals on the planet. “We use polypropylene to make the woven rope used on some chairs, and the plastic we use for the faux leather is polyethylene. We don’t use PVC though, it’s toxic.”

In recent years, Yothaka has also expanded its range of naturally sourced materials to include cotton rope, pineapple paper (parchment made from the plant’s long, tough leaf fibres) and lipao, a fern vine that grows in southern Thailand, which up until recently was reserved for royal use only.

“I wanted to build the image of the company to show that Yothaka is a high-quality brand, both in its workmanship and products. I chose lipao because I’ve loved it since I first started. But when I said I’m going to make lipao into furniture, everybody – even my partner – said, ‘Are you mad?’ One lipao handbag is about 70,000 baht (S$3,030) and some are 100,000!”

When I interrupted him to estimate a lipao chair’s cost, he says with a grin: “You could buy a second-hand car.” Of course, all this artistry is meaningless unless the chair itself is enjoyable to sit in, and that’s the underlying factor behind Yothaka’s fame. “Comfort and design sometimes exist in parallel. You can’t always get two in one. But if you can achieve that, it means that design will be successful.”

Sign up to get the latest luxury and lifestyle news delivered to your inbox.
Design people Interviews art and culture
Bruce Scott

What does Japandi mean?