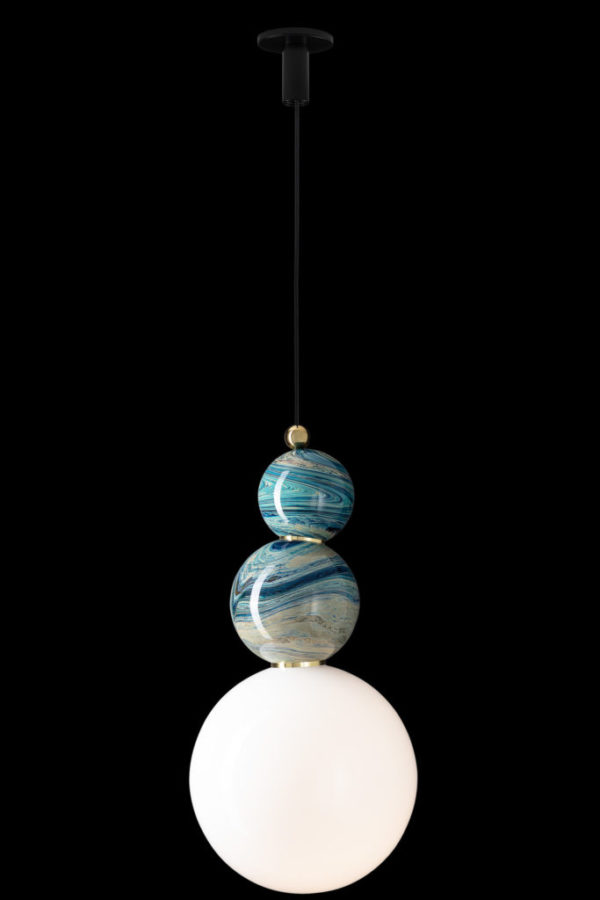 The right lighting is a crucial aspect of setting the ambience and character of any room. Knowing this, Czech-based lighting firm Lasvit has unveiled a set of precious novelties skilfully crafted from hand-blown glass.

The new Spacey light by Lukáš Novák for Lasvit appear like mini planets in orbit, coming in a selection of orbs with dreamy swirls in shades of brilliant blue, brown, and white. The effect is achieved by a type of marbled glass called lithyalin. Typically, the material resembles polished gemstones, but Novák is part of a new generation of Czech designers that have put their own spin on it and, in this case, created the mesmerising look of a planetary surface observed from space.

According to him, a sphere is the most perfect shape in the universe and his intention was to create a lighting design that pushes the limits of the form further. Hanging from two stacked lithyalin globes on the pendant light is a creamy white one holding the light source. Spacey comes in two variations: Supermoon has a brighter colour palette with shades of turquoise and beige, while Eclipse has a darker one of deep greens and greys.

Lasvit’s creative director Maxim Velčovský drew inspiration from the panorama of mountains surrounding the Czech brand’s headquarters in the Czechia borderland to create the Volcano pendant light. Its pyramid shape looks like a mini model volcano, and is made from glass blown to achieve a texture resembling the rough landscape around volcanoes where lava hardens and cools.

While the Volcano was inspired by nature, the Globe Metro by designer Cyril Dunděra was inspired by something manmade – the coloured tiles on the walls of Prague’s metro that combine convex and concave shapes to form a visual puzzle. Made entirely of borosilicate glass, the ball shape of the Globe Metro light is masterfully kneaded by hand into a perfect ball.

The concave hemispheres are achieved by precise flame-work in reverse mode – sucking the air in instead of blowing it out. The result is a mesmerising iridescent metal-coated ball that comes in either rainbow blue or iris.

To find out more, visit watelier.com.

Sign up to get the latest luxury and lifestyle news delivered to your inbox.
Design lighting Home Decor Lasvit
Annabel Tan
Home Decor

Which Flexform Furniture Piece Do You Need In Your Home?

Back at Work? These Potted Plants Will Boost Your Productivity from Your Office Desk