Pursuits
You Can Now Live in a Sretsis World at this Nichada x Sretsis Collaboration Project, “Tropical Magick Villa”
Share
Next article Located in Premier Place III Nichada, Tropical Magick Villa is a colourful home with magical elements that reflect Matina’s unique ways of seeing the world. Matina’s design incorporates animated wallpapers from the House of Hackney, with décor and furniture from Jim Thompson and Corner 43. It’s modern. It has a hint of Thai and vibrantly refreshing in ways no one except Matina can do. Here, she shares her dreams and walks us through her design process in an exclusive conversation. Can you tell us about how this collaboration started?

Initially, Nichada reached out to Sretsis about wanting us to create a fantasy home for them. It’s like a collaboration project because we didn’t build the house—Nichada has been a long-standing housing project with the largest expat community in Bangkok. With their second generation stepping in to help the family’s business, they want to create a new image for Nichada. That’s why they reached out to us and asked Sretsis to do the interior decoration of one of their existing houses. 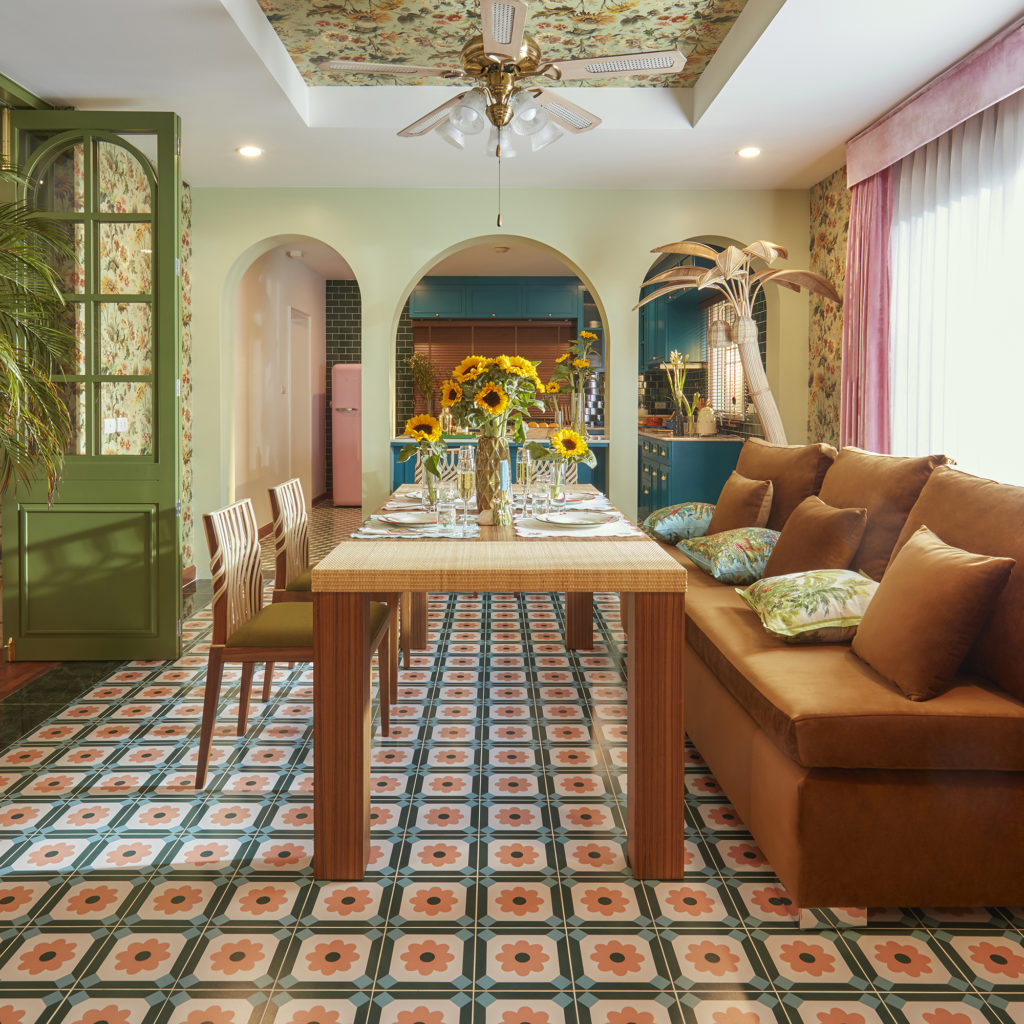 What did you have in mind when designing Tropical Magick Villa?

Whenever I think of Nichada, I always think of large, verdant trees around the project. We’re talking about trees that have been there for over 30 years, and that’s something you can’t find in newer projects. That’s the charm of the project, in my opinion. Then there’s the fact that Nichada is so international; that’s why I thought it would be good to bring some elements of modern Thai to the project. I was hoping that whoever lives here, a Thai or an expat, would feel like they’re really in Thailand. That’s why I named the collaboration ‘Tropical Magick’—because I want to embrace our climate and highlight that Thai aesthetic through modern eyes. I followed the same design philosophy as Sretsis, but this time it’s applied through interior design rather than fashion.

From fashion design to interior decoration, was it a difficult transition for you?

I didn’t find it difficult at all. It was a really enjoyable process. Interior design and decoration is something that I’m already passionate about. Whether it’s fashion or furniture, the inspirations reflect off each other—they’re all connected.

On top of that, having designed Sretsis Parlour before this, I’d say it wasn’t a big jump between fashion and interior. In fact, it was because Sretsis Parlour caught their eyes that Nichada decided to contact us for this collaboration. They saw Sretsis Table and the wallpapers we used from the House of Hackney, and they liked it.

Can you tell us about the design thinking and process?

I designed with everyone in mind. Naturally, it’s different from Sretsis Parlour and even how we would design the Sretsis stores because those are 100% our fantasies—they’re the world of Sretsis. However, this will become someone else’s home, and so I decided to give them a starting point where the owners can add to. I left them, in a way, some black space so that they can bring part of themselves into it. The decoration this time draws on Thai influences than Western. Because I was working with an existing structure, which is relatively subdued, I don’t want the transition between the exterior and interior to be too drastic or abrupt. I like the outside and the inside to have a certain harmony and balance. That’s why I chose a green palette to serve as a connecting point between the inner and outer space: by pulling the green of the trees into the house.

That’s apparent in the wallpapers you picked, too.

That’s right. The patterns I picked for the wallpapers contain tropical motifs such as flowers and palm leaves—details that lead the imagination to the feel of living in Thailand.

For example, the House of Hackney wallpapers that I picked include Palmeral—one of their first patterns inspired by tropical climates such as ours. Other prints include Dinosauria and Pluma, which features a pampas grass pattern. I’ve also included one of their latest prints, Avalon, a sunflower pattern. These are perfect for creating that sense of locality despite it being a London brand. They are essentially prints with particular ties to our climate or flora that can be found in our country. That’s why I also picked Thai furniture and décor brands that I admire, such as Jim Thompson, Ut-tha-yan and Corner 43, which carries beautiful rattan pieces for that tropical vibe.

What’s your favourite room in the house?

I have to say it’s the kitchen-dining-playroom which is all interconnected to each other. I’ve designed it so that everyone feels included. Even if one person is cooking in the kitchen, they wouldn’t feel left out and can still interact with those sitting in the dining room. The dining room is also connected to the playroom so that parents can enjoy a conversation and eating while their children play in the next room. That’s my favourite zone. I designed the house thinking that the people living here would feel connected to nature. Everything that I’ve picked-the furniture and the carpets—are meant to stimulate the sense of being one with nature. That’s why I hope that the people who’ll live here will feel that happiness living here.