By Jinda Wedel
Presented by Sansiri

It took Saravut “Gy” Sereethornakul just 10 hours to decide to make the penthouse at Sansiri’s ultra-luxe The Monument Thong Lo his new home. Here’s why.

Saravut Sereethornakul, also known as “Gy”, lounges comfortably on a plush velvet sofa in the palour, still clad in the Versace emblem top from our Prestige photoshoot. As the managing director of the Sereethoranakul family’s behemoth business, he was raised in the upper echelons of Thai society. Now, he is also the CEO of JS Asia Beverage, known for its birds’ nest medicinal tonic, Juice Nest. We are in the sumptuously appointed indoor poolside lounge on the second floor of The Monument Thong Lo, chatting as the camera crew and stylists pack up. Such ornate surroundings are clearly his domain. “I toured the property on a Monday evening,” recalls the 36-year- old. “By Tuesday, I had decided to purchase it. I didn’t hesitate. The choice was obvious.”

“Price is just not a factor in my life,” he explains, referring not only to his lavish lifestyle but also to the premium price tag of his new super luxury penthouse duplex that takes up the entire 43rd and 44th top floors of the building – the highest point in Thonglor.

A glance around reveals this is a philosophy that Sansiri also followed when designing and developing the Monument Thong Lo. Along one wall are floor-to-ceiling glass windows that open out onto a stunning, 28-metre architectural pool space which is shaped like a half-oyster shell and lined with white cloud stone. The pool area’s curved, sensuous trellises and features, illustrated in arched bamboo slats nearby and in the pool architecture itself, are echoed throughout the property. 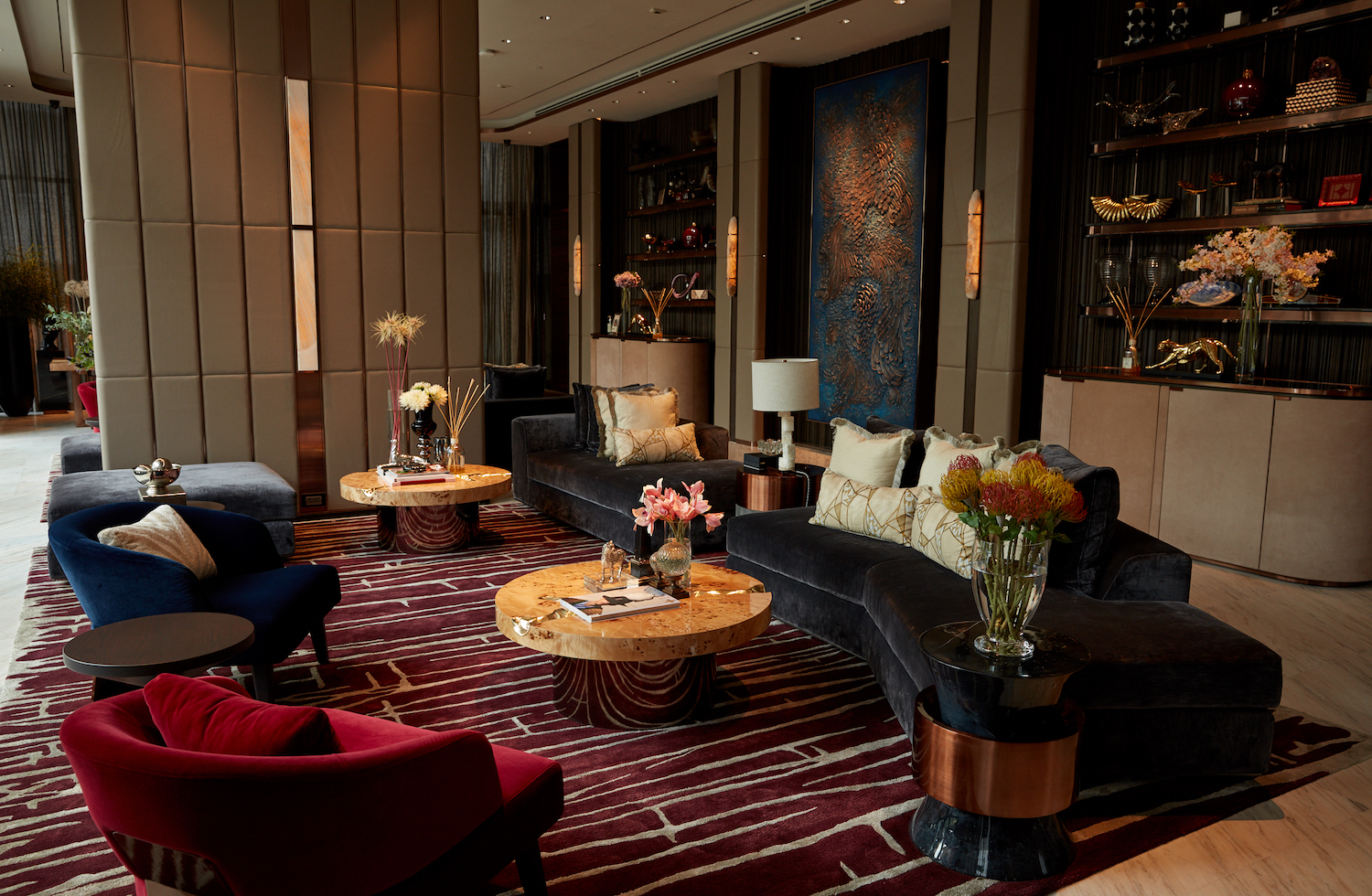 Gy defines luxury as “grandeur, rarity and price”, and the finishes at the Monument Thong Lo certainly fit this bill. One-of-a-kind fittings are plentiful in the main lobby, such as the bespoke hand- blown glass chandeliers and other pieces by the Czech Republic’s famed glassblowers Lasvit, walls panelled with palissandro classico flecked marble, and marble columns clad in full-grain cowhide and ornamented with gold-hued aluminium.

For this proud homeowner, however, even more important than the luxury factor was the property’s prime location: Thonglor. Gy had long searched for a Thonglor-area penthouse duplex, and even toured a penthouse in Ekkamai, but it didn’t meet his needs. “When I purchased my home, the most important decision was choosing the location,” he recounts. “My life was already in Thonglor. Restaurants, activities, nightlife, and my friends – they’re all here.”

Thonglor is a cosmopolitan neighbourhood catering to world- class tastes, and within a radius of a few kilometres are countless boutique design firms, imported interior décor companies, fine dining restaurants, and world-class nightclubs. Of course, an address in Thonglor is more than just a geographical locator; it is also the mark of Gy’s young, upper-class lifestyle. Though he grew up in Bangkok, he spent a significant amount of time abroad. He attended St. Michael’s Grammar School in Melbourne, then went on to study at Deakin University. He later returned to Bangkok and earned a Bachelor’s in Marketing from Bangkok University.

For Gy, and jetsetters like him, the area’s diverse culinary scene, nightlife, and other activities are a large part of the appeal. It’s easy to see why Sansiri, the real estate developer known for one of the first ultra-luxury properties in Bangkok, 98 Wireless, chose to build in Thonglor. Another consideration for residents is privacy, and in total there are only enough units for about 127 families, despite the building rising 45 storeys from the ground.

As a busy executive, Gy says the location also allows him ample time to rest, which is one of his top priorities. “I hold three things important: health, finances, and time. I work and I need enough rest. Health is the most important of them all and, in some ways, the most expensive thing. I’ve seen how the people I respect and the people who have taken care of me have experienced a decline in their health. So, it’s crucial to take care yourself.”

Health and relaxation are one of the core values of the property. Aside from the yoga room, the fitness facilities, children’s playroom, and the beautiful swimming pool, the property has a 1,000-square-metre wellness garden which boasts a large, 50-year-old rain tree. This patch of greenery also includes an herb and flower community garden, which sports rows of basil and other aromatic plants. It is, in short, an oasis of calm. A balanced life is key for this young executive, who is also known for his passion for cars. Right now, Gy is part of the Wattana Racing Spirit ‘Kho Ro Mor’ PSC Motor Sport team, and his current rally car is a Lamborghini Huracan GT3. With the current Covid-19 pandemic shuttering races, he chats excitedly about the upcoming Super Car GT 3 rallies scheduled to take place from October to December in Buriram.

Thanks to the careful planning and excellent service-minded philosophy of the team at the Monument Thong Lo, Gy can park several of his other supercars here. This type of after- sales service is another one of the reasons why he chose this property developer. “I didn’t consider this purchase as an investment. I wanted a home, and for me, I trust Sansiri’s after-sales service,” he said. For residents, there is a veritable squadron of service professionals at The Monument Thong Lo. The “All-Suite Butlers” team are trained with the British Butler Institute curriculum and are supervised by the property’s Director of Living. Included are a mixologist, a ‘romanceologist’ (a fragrance expert), and a healthologist, alongside dedicated valet parking, limousine service, and a shuttle service.

Ultimately, what truly makes his penthouse a home is the freedom to realise one’s grandest, long-held dreams. Despite his new home being currently only a shell, it allows Gy a chance to craft it into the perfect abode.

“I had a dream I’d make a Versace home. I want to make this the most beautiful Versace residence in the world. That’s my conviction. The theme – napkins, forks, plates, Champagne glasses, wine glasses, everything – will be Versace. That’s been my goal since I was a child,” he divulges with glee. Why Versace? Gy muses for a moment. “Versace dedicated everything to his taste and style,” he retorts. “He has his own way of thinking and never hesitates, no matter the cost.”

At 695-square-metres the penthouse certainly has the space for Gy’s lofty dreams, while five-and-a-half metre ceilings and wraparound windows offer what is undoubtedly the best views of Bangkok from Thonglor. “I can see all the way to the river,” he exclaims.

There are three main zones, and this young business mogul has grand plans for each. His bedroom and private living space will occupy the upper floor, where he’s already planning to bring his Versace bed here from his current home. The bottom floor, by contrast, is divided into two wings – left and right. Currently, Michelin-starred chefs prepare meals weekly for Gy, so it’s only natural that each zone will have its own dining room, meant to cater to both formal and casual gatherings that he plans to host. A 500-bottle climate-controlled wine cellar is also slated to be built to store all his favourite French labels.

The right wing will be the reception area for guests to mingle during apértifs, with the adjoining area set to hold a 20-person formal dining space set up to receive honoured guests and notable executives. The left wing, meanwhile, will reflect the other side of his life – a place for him to relax and unwind with his closest friends. Here, he hopes to create a lounge area replete with a bar, a pool table and full karaoke setup. A secondary 10-person table will also allow the opportunity for meals. “It’s closer to the kitchen, too,” he adds, making it a more intimate space.

The latter part of this year will prove to be a busy time for Gy. Aside from his passion for racing and his family business, he plans to make an ambitious 200-million-baht drive into the Chinese market for his relatively young Juice Nest brand. He agrees that these few months have afforded him a rare moment to take a break and envision his future home. It will be intense work, he acknowledges, but at least everything will be in accordance to his taste. “I don’t want a single glass to be out of place.”

“Home is the place that makes you happy,” he remarks, and we agree. And isn’t that something worth seizing at a moment’s notice? As they say… carpe diem!

To find out more about Sansiri Luxury Collection, call 1685, or visit sansiri.com.