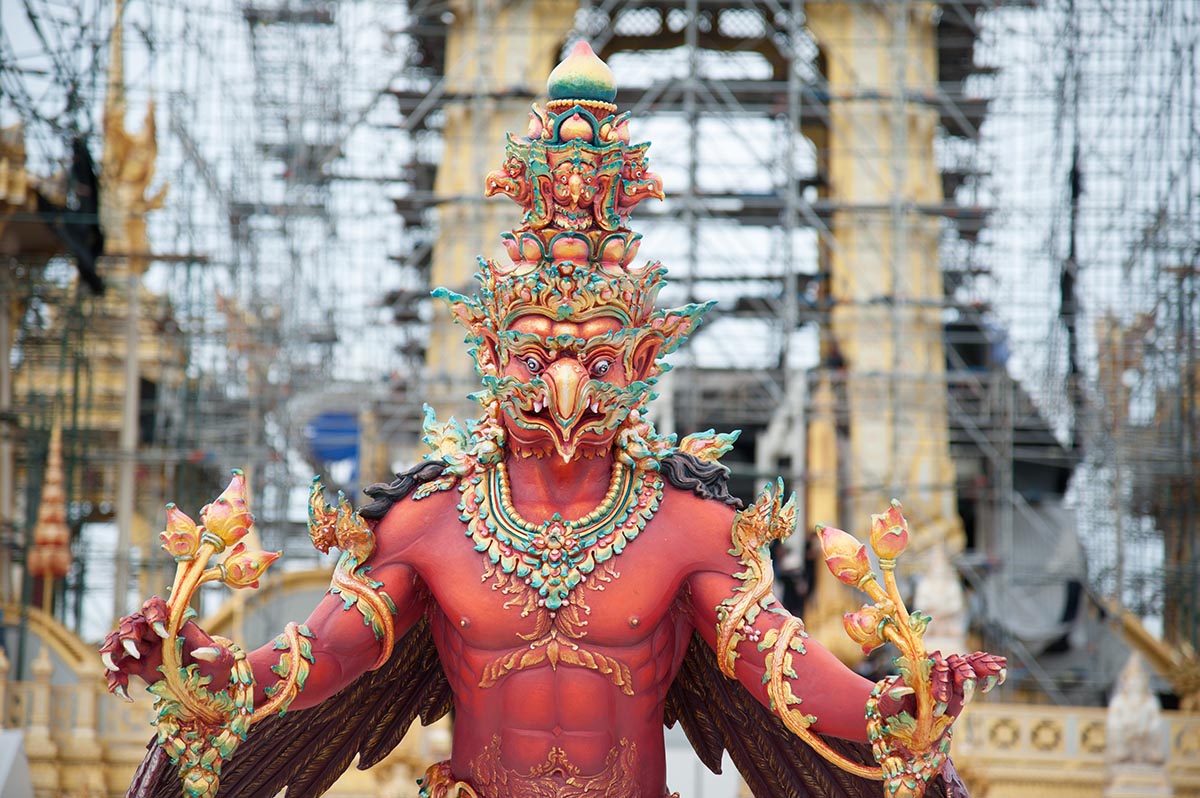 On November 28, 2016, at Government House, Deputy Prime Minister General Thanasak Patimaprakorn presided over a meeting that would discuss the construction of His Majesty King Bhumibol Adulyadej’s royal funeral pyre, the materials for the construction and the restoration of the royal chariot and royal sedan.

By the end of the day, the Department of Fine Arts was tasked with the design and construction of the funeral pyre. It would be a four-posted throne with nine spires, a construction different from any other pyre previously made. The artwork would adhere to the universal beliefs concerning all the assumed deities, in keeping with royal funerals from the past.

The vast green grounds of Sanam Luang, located north of the Grand Palace, would serve as the site for major preparations, as well as the site where Phra Meru Mas ­– the royal crematorium –  would be built.

Since the passing of HM The King on October 13, 2016, hundreds of artisans, artists and volunteers from the public have been working around the clock on all the sites, moulding, sculpting, painting and carving the ornaments required for the royal funeral.

They estimate the project they are putting together would normally take at least two years to complete – they’re doing it in less than one.

Phra Meru Mas, the temporary pyre that will be demolished after the ceremony is completed, stands 50.5 metres tall and is 60 metres wide.

On top of it are nine busabok, ceremonial lotus-shaped pavilions for sacred objects. Of the nine, one stands at the top and centre, representing Mount Meru, which is believed to be the centre of the universe, according to Hindu mythology.

At the foot of this mountain lays the legendary Himaphan Forest and its mythical creatures. Representing them are fibreglass sculptures of 400 deities and angels, as well as 100 mythical animals.

These have been shaped and moulded by the Office of Traditional Art’s sculptors, while a group of craftsmen from Phetchaburi have created 90 small stucco statues. The sculptures were painted with oils and the statues with 60 shades of acrylics.

A Thai king is believed to be the avatar of one of the three mighty gods – Brahma, Shiva and Vishnu. The phrase “Ramathibodi” that appears in HM King Bhumibol’s full name signifies that he is the avatar of Vishnu or Ramayana.

In Buddhist belief, a king is a Bodhisattva born in the Dusit level of heaven and will reincarnate as the future Buddha. Hence, Phra Meru Mas is built to send the king back to heaven.

Seven royal chariots tasked for this job were built in 1796 to carry the royal urns of several earlier kings and queens. To return them to their original glory, eight artisans from the Department of Fine Arts and 20 volunteers have worked tirelessly to fix damaged or deteriorated parts.

The greatest chariot, Phra Maha Pichai Racharot, was carved from wood and decorated with lacquer, gold leaf and glass. It sports exceptional wood sculptures of naga and other mythical motifs, as well as lavishly embroidered royal umbrellas.

It weighs an incredible 13.7 tonnes, and moving it requires 216 trained officers and five controllers with specially-made ropes.

Another key feature of the royal funeral is Chak Bang Phloeng, or the fireguard, which is a foldable panel placed at the top of the stairs that goes up to the royal funeral pyre. On this panel are unique and intricate paintings that depict HM’s work throughout his life.

Apart from paintings of heavenly flowers and eight avatars of Vishnu, the lower part of the panel features the monarch’s royal initiatives in soil, water, wind and fire, as well as fuel and energy, which are depicted in paintings of the Chaipattana Aerator, wind turbines, rainmaking and more.

Teachers and students from the College of Fine Arts and Pohchang Academy of Arts, who volunteered for this project, have produced paintings on the three walls of Phra Thinang Song Tam, the royal pavilion. The paintings depict bird’s-eye views of 46 royal-initiated projects across a 117-square-metre wall.

This is the first royal funeral in the country’s history that showcases paintings such as these.

The closest element to HM The King’s body is Phra Kot Chan, a sandalwood funerary urn that will contain the monarch’s body when it is placed on the funeral pyre.

The urn is made with mai chan hom, or sandalwood, which is one of nine auspicious plants in Thai beliefs. The rare, aromatic hardwood was sourced from Kui Buri National Park in Prachuap Khiri Khan.

Iron rods and wire mesh made up the structure of the urn before it was covered and layered with little pieces of intricately carved wood. Instead of traditional lotus petal features, the royal urn for HM King Bhumibol Adulyadej features the design of Garuda, the carrier of Vishnu.

Ten artisans and 80 volunteers managed to complete the royal urn in eight months.

Spanning five days from October 25-29, the royal cremation will be a spectacular event infused with Buddhist ceremonies, cultural performances and traditional court rituals.

Up to 70,000 state officials and registered volunteers will provide security at Sanam Luang, and more than 300,000 grieving citizens are expected to attend the royal funeral to bid their beloved king, and one of the world’s greatest monarchs, one last goodbye.