Your Survival Guide for the Final Mercury Retrograde of 2021 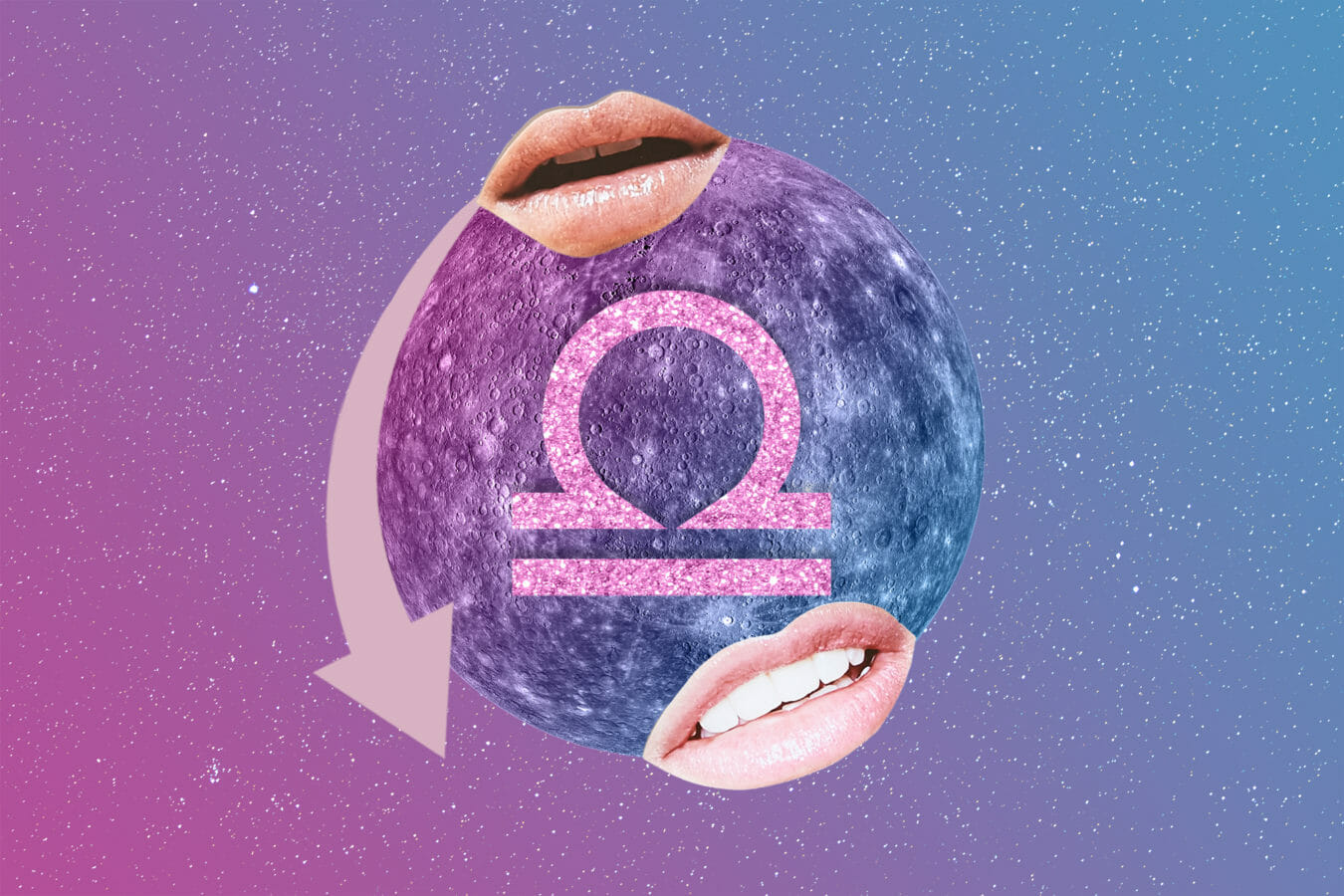 Fall is in full swing, which means airy, relationship-oriented Libra season has arrived, serving as a super-social bridge to the holiday season and what remains of 2021. But thanks to Mercury’s third and final retrograde of the year, you may need to take a few steps back before you can fully move into the future. The planet of communication, transportation, and technology kicks off its backward turn on Monday, September 27 in cardinal air sign Libra, symbolised by the Scales. Until Monday, October 18, when Mercury retrograde ends, the planet that can make or break key conversations, crucial negotiations and contracts, and your commute will appear to move backwards through the sky.

Chances are you’ve heard time and again how Mercury retrograde is nothing short of a total pain in the tuchus, throwing a wrench in communication, technology, and transportation for the better part of a month. Even before it “stations” retrograde — aka moves to nearly a standstill before turning backwards — you’ll likely feel its frenetic, frustration-inducing vibes. It’s almost like, in an effort to thwart the slowdown, we’ll push even harder to connect and to move ahead. And the more we push, the wonkier things get. Calls drop out of nowhere, emails mysteriously disappear into the ether, it feels like no matter how hard you try, you can’t seem to get your message across. But the messenger planet’s backward turn isn’t solely devoted exclusively to chaos, confusion, and delays.

Here’s what you need to know about the September 2021 Mercury retrograde and how to not only cope but also make the most of the moment (yes, it’s possible).

A Quick Primer on Mercury Retrograde

First, the basics on what is often framed as the most notorious astrological event.

Anytime you receive an eyebrow-raising DM from someone you haven’t spoken to in eons, or traffic is an inexplicable nightmare, you might default to blaming Mercury retrograde. And a lot of the time, it might very well be the culprit, because of the fact is that it does happen frequently. The communication planet goes retrograde approximately three to four times a year for three weeks at a time. In other words, Mercury is retrograde 18 per cent of the time.

That 18 per cent, however, doesn’t account for the lead-in and lead-out periods, referred to as the “Mercury retrograde storm,” before and after every retrograde. During this time, Mercury has to put on the metaphorical brakes before turning retrograde and then rev back up after the fact. Because it’s the speediest planet in the solar system — it moves around the sun every 88 Earth days, travelling at nearly 1,12,000 mph — it’s easy to feel the messenger planet’s perceived slowdown and rev back up to speed. (Reminder: Mercury’s not actually going backwards, but just appears to do so from our viewpoint on Earth.) But the day you’ll most feel its effects will be when it “stations” — aka actually goes — retrograde or direct.

Mercury’s backward spin is generally characterised as triggering tech glitches, scrapped travel plans, and blood pressure-escalating misunderstandings. But it’s not that simple — or negative. Mercury retrograde is also an opportunity to step back from the perpetual hustle of daily life, revise and reflect, to tie up loose ends on whatever you’ve previously started and need to address in order to more confidently, decisively move forward. The thing is: We’re conditioned to gather and disseminate information and go, go, go 24/7 (hi, burnout) — as speedily as humanly possible and sometimes even faster than that — the planet that rules all that mental energy and communication actually urges us to take the occasional time-out from that unsustainable pace.

We all know life wasn’t meant to be lived with a lead foot every day of your life. And by taking a beat to slow down and check in on yourself, you could get even further in the long run.

Themes of the September 2021 Mercury Retrograde

From September 27 to October 18, the communication planet will be retrograde in Libra, the cardinal (also known as the most initiative-taking) air sign. Known for being super-social, justice-seeking lovers of balance, beauty, and partnership, those born under the sign symbolised by the Scales — or who have significant placements in Libra in their natal charts — are born meditators who are constantly seeking harmony, abhor conflict, and are wired to tune into both sides of any given story in order to reach an amicable solution. Ruled by Venus, the planet of love and beauty, they have an innate ability to take anything they perceive as out-of-whack or aesthetically problematic and make it eye-catching and appealing. Yup, they’re the designers and couple’s therapists of the zodiac. And the air sign is also the ruler of the seventh house of partnership, so pairing romantically, platonically, and professionally is their forte.

The vibe of Libra is lighthearted, personable, and ambitious. And while Mercury is in the air sign, we prioritise equality, justice, and communication within one-on-one relationships. That all sounds fairly productive, but a pitfall of Libran energy is that because they’re so mentally charged, beauty-focused, and insistent on getting the scales balanced just so, they can find it tough to take a strong, definitive stance. People-pleasing vibes and a refusal to spur conflict can also lead to stalemates for those who have Scales placements.

That said, when Mercury is retrograde in Libra, our interactions hinge heavily on addressing ongoing imbalances, going back to the drawing board to boost harmony within bonds of all kinds, giving equal weight to every possible scenario when triaging an existing problem, and going to bat for justice that’s overdue. But given the at-times flighty nature of Libra and the slow, confusing nature of Mercury moving backwards, it’ll be tougher than usual to reach definitive, hard and fast conclusions or solutions. Instead, the transit can set the stage for a lot of talk, negotiation, back-and-forth, and intellectual exploration.

At the same time, this Libra season isn’t without other challenges that could deal setbacks, delays, or tense clashes with the people in your orbit. When the confident sun — and messenger Mercury — are in a cardinal sign, such as Libra, they form difficult squares to transformative Pluto, currently in cardinal earth sign Capricorn. And on October 1, Mercury squares Pluto, amplifying our desire to shine light on the shadow side of life — but also to lean on coercive tactics. (This is an aspect that occurred on September 22, and repeats, thanks to Mercury moving back over that particular degree of Libra on the 1st.) And on October 17, the day before Mercury goes direct, the sun clashes with Pluto, illuminating control issues, destructive behaviours, and power struggles.

There’s also a new moon on October 6 in Libra that would usually be fairly benign, but with Mercury retrograde spurring miscommunication and the moon nestling up to aggressive Mars, plus a tough angle to rebellious Uranus, it could feel more like a drama-packed and potentially volatile new moon.

The Signs This Mercury Retrograde Will Affect the Most

Because the retrograde is happening in cardinal Libra, the other cardinal signs across the other elements will feel this particular backward turn the most. That includes Aries (cardinal fire), Cancer (cardinal water), and Capricorn (cardinal earth). Aries, you’ll feel it in your seventh house of partnership, Cancer, in your fourth house of home life, and Cap, in your tenth house of career.

In addition, Geminis and Virgos generally feel all Mercury retrogrades more acutely than others, since they’re both ruled by the messenger planet.

By leaning into the lessons of the third Mercury retrograde of 2021, you can absolutely find ways to make the most of the moment. Consider making the following moves.

Pair Up with Your Better Half

You may think of “better halves” as romantic partners, soul mates, spouses, but the seventh house of partnership — Libra’s home terrain — doesn’t discriminate when it comes to the type of bond you could share with another person. Whether it’s based on love, friendship, finances, business, or fitness (your yoga teacher, workout buddy, personal trainer, for example), a partnership can serve to boost your productivity and emotional centredness. You could find that Mercury’s backward turn in Libra allows you to reconnect with someone from the past whose energy perfectly complements your own. Or you’ll have a chance to address ongoing conflict or misunderstanding within a one-on-one relationship once and for all.

Refocus Your Personal Push for Justice

Everywhere you look lately, injustice is glaringly obvious and distressing, but instead of being daunted by it, Libra energy challenges us to steel ourselves and find a way to fight for what is right, because what could possibly be more important? No matter which wrong you’re most passionate about righting, this Mercury retrograde is wired to make it possible to slow down and gain clarity around the best way to make a real difference in the world.

Reorganise and Prettify Your Space

Libra’s Venusian vibes make the sign pros at taking something disorderly, chaotic, or a total eyesore and turning it into a thing of beauty. In other words, this retrograde presents a wonderful opportunity to finally tackle that redecorating project you’ve been putting off or to make your home or office more functional and aesthetically appealing.

Wires will get crossed. Delays will occur. Confusion — and in turn, aggression — could reign supreme. And holding onto Libra’s airy, peace-loving energy could be your best bet for weathering the storm. Be open to switching things up, learning in the moment, and prizing equality, balance, harmony, and beauty (the kind that comes from the inside out), and instead of being a complete headache, this Mercury retrograde could prove surprisingly rewarding.

Maressa Brown is a writer and astrologer with more than 15 years of experience. In addition to being Shape‘s resident astrologer, she contributes to InStyle, Parents, Astrology.com and more. Follow her Instagram and Twitter at @MaressaSylvie.