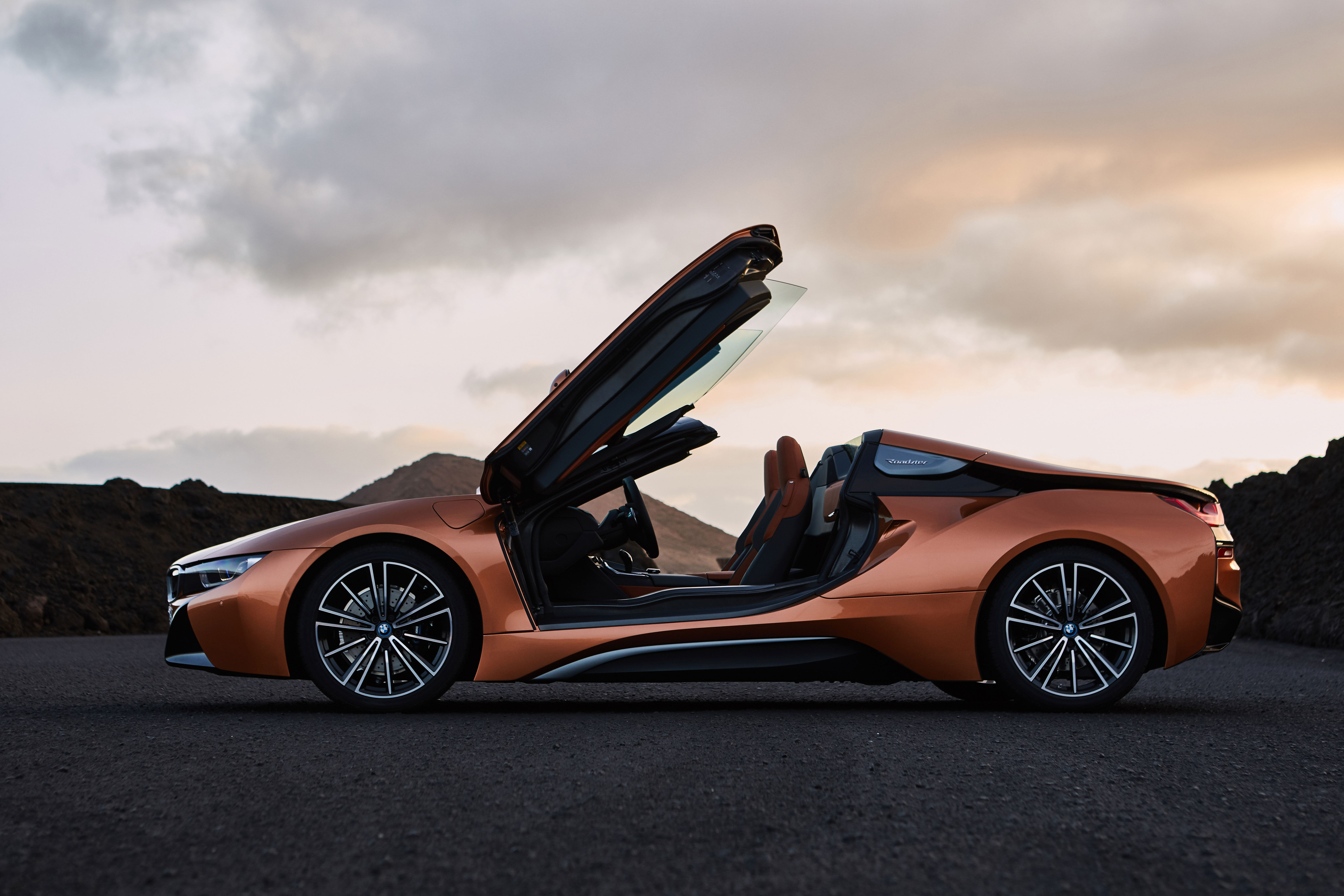 Regular readers of Prestige will know by now that we’re almost always led by the heart and not the head. It explains why we aspire to dress in Chanel or Canali rather than Cotton On, and at the very least to strap a TAG Heuer or Tudor on to the wrist rather than a Timex.

Much the same applies to our attitude towards motor cars. We prefer to drive – or, failing that, simply gawk at – machines that stir our emotions, rather than those designed purely with practicality in mind. Which is why, on this list of 10 cars that we’d love to add to our collection in 2018, you’ll find at a pinch four that can claim to being in any way sensible – and, perhaps not so coincidentally, one of those also happens to occupy a spot right at the bonkers end of the sane/mad continuum.

If that means that by following our advice you end up with nothing in the garage suitable for carting the kids to and from school, well, tough – the lazy little tykes can jolly well take the bus. Happy motoring!

Having been stuck in a rut for more than a decade, Aston Martin finally broke new ground last year by launching the DB11, which marked a radical departure in terms of both engineering and styling. It followed that up with the sensational Valkyrie hypercar, jointly developed with the Red Bull Formula 1 team, and, less than two months ago, revealed its bold new 2018 Vantage. Sharing the same platform as the DB11, the Vantage features sharply whetted lines that recall those of the Valkyrie, though in far more traditional form, and replaces the previous model that was introduced some 12 years ago. Stunning to behold, this new “entry-level” Aston is powered by a 503bhp, 4-litre twin-turbo V8, which is built by the company’s technical partner, Mercedes-AMG, and is regarded by petrolheads as being one of the best motors in the business. As far as we’re concerned those fabulous looks seal the deal on their own, but if you’re still not convinced, there’s always the 0-100km/h time of 3.6 seconds and the 314 top speed to consider.

Near-legendary among fans of motor racing, Italian manufacturer Dallara builds all the chassis used in the Indycar, Formula 3 and Formula E series, and if that alone weren’t worthy of respect, the company’s 81-year-old founder, Gian Paolo, designed the first modern supercar, the fabulous Lamborghini Miura. Fulfilling a lifelong dream to build a road car under his own name, Dallara recently unveiled the Stradale, a tiny, track-focussed, two-seat missile constructed largely from carbon-fibre and weighing a little more than 850kg. Powered by a heavily breathed-upon 2-litre Ford Ecoboost engine (chosen for its ability to be tuned virtually ad infinitum) that produces around 400bhp, the mid-engine barchetta offers incendiary performance and race-car handling, though there are a couple of major drawbacks: there are no doors, and a full windshield, roll-over bar and gull-wing side windows/roof are all pricey options. But that doesn’t appear to be an obstacle, as all of the first year’s production quota (around 120 cars) has already been snapped up, Fiat-Chrysler and Ferrari boss Sergio Marchionne being among the fortunate few.

Right-hand-drive examples probably won’t start appearing till the spring, and there’s no word yet on whether the Alpine A110 is even destined for Asia, but given the desirability of this new lightweight two-seat coupe, the chances are we’ll almost certainly be seeing a few in this part of the world anyway. Renault’s Alpine-branded A110 resurrects both marque and model names that are treasured by petrolheads, and its styling draws heavily on that of the original 110, which won the Monte Carlo Rally twice and, in 1973, the World Rally Championship. Unlike the older one, however, this new car is constructed from aluminium and, with almost 250bhp available from its 1.8-litre turbo motor and a weight of just 1,100kg, it’s terrifically fast as well as superbly balanced, the latter deriving from its classic mid-engine configuration. Among the uninitiated, the name Alpine may not resonate anything like as strongly as that of Porsche, but in terms of driveability and sheer enjoyment the A110 is easily a match for the latter’s 718 Cayman. There’s a choice of three colours only, but obviously you’ll be ordering yours in French racing blue – just like the one that won the Monte, non?

Launched back in 2012, the first-gen RS5 was, to be honest, a bit of a hound: brutally fast, with its magnificent naturally aspirated 4.2-litre V8, but, thanks to its over-fettled chassis and over-assisted steering, unsubtle and strangely uninvolving. What a difference, then, the 2018 model – which arrived in Asia late last year – has turned out to be. Although in appearance a dead-ringer for the earlier car, it’s actually entirely new, from the considerably smaller – yet just as powerful and massively more torquey – 2.9-litre twin-turbo V6, to the revised architecture, which has helped shave more than 50kg in weight compared with its predecessor. Responses – and, crucially, feedback – have been sharpened, too, so this new RS can now fairly claim to be a proper driver’s car, and over long distances it’s both blisteringly quick as well as surprisingly comfortable, even when Dynamic drive mode is selected. As it’s an Audi, the cabin is, of course, impeccable too.

When asked, as we often are, which is our favourite car, the answer is invariably that it’s impossible to say. Rephrase the question to, “If you had to own just one automobile, what would it be?” then our riposte would almost certainly be, “Porsche 911.” And that’s because the evergreen Carrera, which this year celebrates its 55th birthday, just goes on getting better. So, to mark five-and-a-half incredible decades of the Greatest Sportscar Ever, we’re adding the recently announced, stripped-down 911 Carrera T to our list of automotive must-haves for 2018. Weighing 20kg less than the baseline 911 and with a glorious, close-ratio seven-speed manual mated to its 3-litre, turbocharged boxer six, as well as standard lowered sports suspension and mechanical locking rear differential, the T recalls the Touring models of the late 1960s and is designed to deliver an even more visceral driving experience than its more civilised siblings. And to our ears, that sounds like a car to crave if ever there was one.

Although its sculpted yet graceful exterior styling upholds a tradition established by the Continental R-Type of 1952, there’s virtually nothing else that’s evolutionary about the all-new Continental GT, which should arrive in Asia by the second quarter of this year. This luxurious yet immensely fast grand tourer shares its advanced platform and 48-volt electronics with the second-generation Porsche Panamera, and introduces active all-wheel-drive and three-chamber air suspension to Bentley’s most popular model line. Its twin-turbo, 6-litre W12 engine, which produces 900Nm from just 1,350rpm, is mated for the first time to a dual-clutch transmission and offers phenomenal performance: 0-100km/h in 3.7 seconds and a maximum of 333. And frankly, we’ve never seen an interior that combines so effortlessly the often-conflicting prerequisites of a performance car and a limo. It is, in a word, breathtaking.

An absolute game changer when it first appeared in the early 2000s, the Mercedes-Benz CLS four-door coupe somewhat lost its way when the second generation came around, its added girth and stylistic fussiness contrasting uncomfortably with the purity of the original. Revealed at the LA show, however, the 2018 CLS marks a return to brilliance and desirability, with its sleek, predatory profile, low roofline and flanks that, barring a low, uplifting swage line, are almost totally unadorned – the effect verges on stealth, we think. It goes without saying that the interior is fabulous, with loud echoes of the current E- and S-Class, the now-expected double virtual display, any-colour-you-like mood lighting and the option of gorgeous quilted chairs. Engines include the mildly hybridised 3-litre petrol six of the CLS 450 4-matic, with 367bhp and 48-volt electrics that permit coasting as well as turbo overboost functions, but we’re also looking forward to the hyped-up AMG versions, which are bound to follow on later this year and will doubtless provide even greater driving pleasure.

You might wonder why we’re including the F-Type in this listing, a car that’s been around since 2013. Well, it’s here because (a) we love it, (b) its Ian Callum-designed styling still looks wonderful and (c), because the introduction of a 2-litre, four-cylinder power unit means a price point closer to its Porsche 718 competitors, yet with little to no sacrifice in either appeal or performance. Carrying at least 50kg less weight than V6 and V8 models (most of that being lost from the front end), and with its 300bhp Ingenium engine working perfectly in sync with the 8-speed ZF autobox, the F-Type is as fast as you’ll ever need a car to be but, more important, more balanced and agile than any of its bigger-engine siblings. The caveat, of course, is that you really should go for the stiffer and lighter and coupe (it’s a tad less expensive, too) over the convertible if you want to make the most of the dynamic improvements offered by the smaller engine. And if that weren’t sufficient, it’s better looking too.

It’s taken around eight long years for a soft-top version of BMW’s advanced, plug-in hybrid i8 sports coupe to become reality (a concept was exhibited way back in 2009), but looking at the results we can confidently say it’s been well worth the wait. Unlike the tin-top, which is claimed to be a 2+2, this new fabric-roof version is strictly for two people only, but the decapitation has worked wonders for the i8’s looks, which now verge on stunning (and it gets to keep those cool butterfly-wing doors). Whether coupe or Roadster, the 2018 i8 features an aluminium chassis and is still powered by a mid-mounted, turbocharged 1.5-litre triple, which produces an extremely creditable 228bhp, while an electric unit powering the front wheels adds a further 141 horses. Range in purely electric mode is now increased to more than 50km, at speeds up to 105km/h; throw economy to the wind and with that little three-pot racing, the i8 will reach a 250 maximum before the rev limiter kicks in. If this is the way of the future, we like it more than ever.

Smitten though we aren’t by SUVs here at Prestige Towers, we can’t avoid mentioning the new Lamborghini Urus, which, after years in the gestation, finally made its appearance as a production model at the Los Angeles motor show in December. The Urus’s styling has evolved since it was first teased as a concept in early 2012, so that now there’s more of a resemblance to the VW Group’s other suburban tractors, particularly the Porsche Cayenne, though with its shark-nose bonnet it’s more distinctive and aggressive-looking than any of them. Open the lid and, instead of discovering one of Sant’Agata’s naturally aspirated V10s or V12s nestling in the engine bay, you find a twin-turbo, 4-litre V8 that’s tuned to offer more than 640bhp and, from 2,200rpm, 850Nm – which translates to a 0-100km/h time of 3.6 seconds and a 306 maximum, making this the world’s fastest SUV (there’s four-wheel steering, too, and hybrid power is in the pipeline). Whatever your views on the necessity of bridging the gap between supercar and workhorse, you can’t help admitting that the Urus comes closer to achieving that feat than any other automobile – which will doubtless send Uruses flying out of the factory faster than Lamborghini can build ’em.