Everything You Need To Know About the 2021 Rolls-Royce Ghost 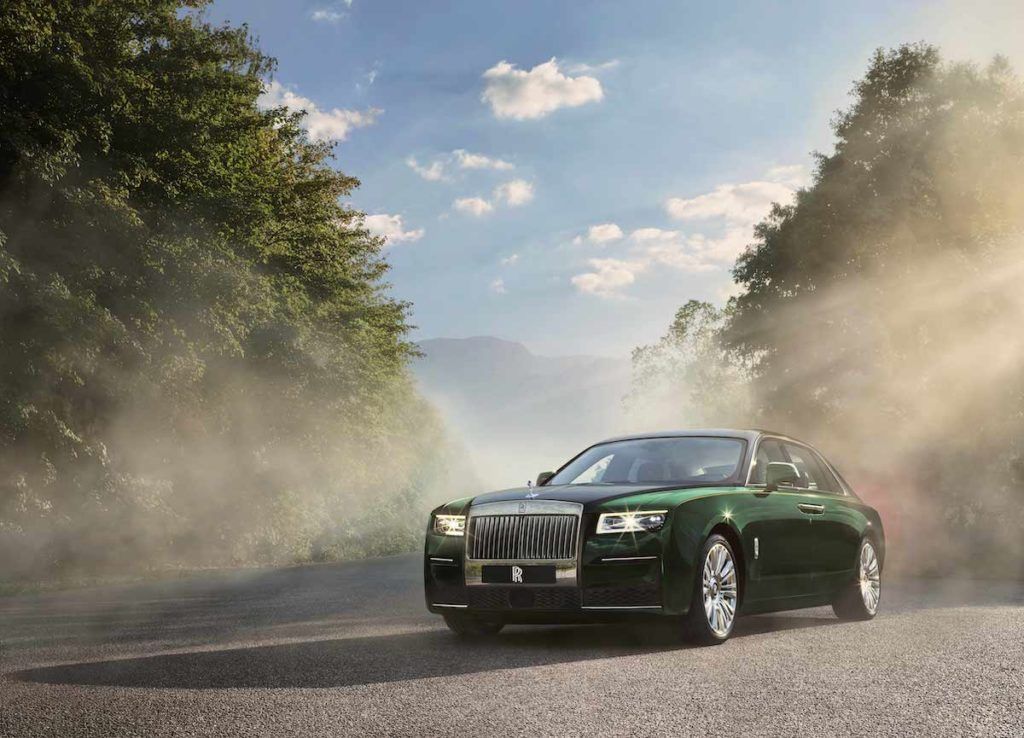 After 11 years and a prolonged period of development, the new “entry-level” model by Rolls-Royce has arrived. It looks unusually restrained, but is it any good?

Restraint is not a word normally associated with Rolls-Royce. The length of a moderate yacht, vast leather chairs like thrones, a small forest of highly polished wood, a radiator grille taller than Bilbo Baggins’ front door – I could go on with the list of superlatives, but no wonder these august and majestic machines are the default choice of kings and queens everywhere. A royal train possibly excepted, they’re the closest thing to a palace on wheels.

Take the new Ghost, for example, which arrived on these shores late last year. Naturally, it’s huge; in fact, at more than 5.5 metres from one end to the other (and a further 17cm if you’re talking about the Extended version), not to mention a girth in excess of 2.1 metres, it’s so enormous you wonder whether you’ll need a bus licence to drive the thing. It also, on first glance, looks little different from the car it replaces, so you might be forgiven for thinking that it’s another case of, so far, so familiarly excessive.

Until, that is, you look again, taking your time and letting the eyes linger longer on its clean and largely unadorned flanks, and you begin to notice there’s something unexpectedly different about Rolls-Royce’s new “baby” – if ever that word could be applied to a car so big. Compared with its predecessor, there’s a purity of line to the exterior styling, which appears pared down almost to the point of – dare one say it of a car that carries the famed Spirit of Ecstasy emblem? – minimalism. And then the realisation strikes you, that not only does the new Rolls-Royce Ghost look sleeker and more modern, but that it’s actually rather beautiful. As the company has also let it slip that it’s now guided by a philosophy it calls “post-opulence”, you start to wonder whether now might be the time to re-evaluate your preconceptions about this most famous and luxurious
of automobile brands.

Even deeper inspection reveals that, in spite of superficial similarities, the 2021 Ghost is no re-hashed update of the original but instead an entirely new vehicle that shares only a single part in common with the outgoing car: the aforementioned Spirit of Ecstasy bonnet ornament. Yes, there’s still a V12 engine displacing more than 6 litres up front, but whereas that in the old car had been raided from owner BMW’s parts bin – and shared with the somewhat less patrician 7 Series – the new Ghost’s twin-turbo, 6.75-litre power unit is exclusive to Rolls-Royce only (versions of it are also found in the even more upmarket Phantom VIII as well as the Culinan ultra-SUV).

Likewise the chassis, which – again like the Phantom and Culinan – is now wholly bespoken and based around Rolls’ adaptable, modular and all-aluminium “architecture of luxury” rather than a BMW-sourced platform. Suspension is a properly modern double- wishbone arrangement at the front and multi-link at the rear, and to soften the blows of bumpy road surfaces, there’s also active damping as well as air assistance – plus, if all that weren’t sufficient, all-wheel drive and four- wheel steering.

If all those suggest that the new Ghost is likely to be unusually driveable as well as extremely comfortable, there’s also that powertrain to consider. Although 6.75 litres and 12 cylinders produce what might seem a relatively modest power maximum of 563bhp, the key lies in the hefty torque, all 850Nm of which is available from just 1,600rpm. In the old, pre-BMW times, Rolls-Royce refrained from revealing output figures, merely (and probably quite correctly) saying that they were “adequate”; there is, however, no shame in numbers such as these, which are sufficient to shift the Ghost’s 2.5-tonne weight from a standstill to 100km/h in 4.8 seconds while leaving the plebs choking in your gently wafted dust.

Useful though such punch may be, it’s rarely why anyone buys a Rolls-Royce. They do so for ride, comfort and luxurious appointments that exist in a different dimension, one that’s way removed from other automobiles, and are provided in abundance by the Extended version that I’m driving today. And though the post-opulence philosophy permeates the cabin design as thoroughly as it does the car’s exterior – it’s evident in a discernible sense of modernity, including matte wood veneer and a full digital display (albeit with chrome surrounds), which surely represent a conscious break with a stuffier past – the materials and craftsmanship are as sumptuous and superb as ever.

Boasting, I’m led to believe, more rear legroom than any current production car and with reclining seats whose ample dimensions put many airline first classes to shame, the Ghost Extended really does have to be experienced to be believed. People talk of “buttery” leather, but here we mean the smoothest and creamiest Beurre Bordier rather than common-or-garden Lurpak, heady with a rich, deep fragrance and swathed across acres of internal real estate. No other cars – except, of course, Phantoms – offer seats like these and, thanks to the almost unbelievable lengths to which Rolls’ engineers have gone in soundproofing this new model, nor do they offer such pin-drop silence.

Fortunately, the quest for rationality hasn’t resulted in the complete abandonment of whimsy, so the test car not only flaunts a night-sky roof lining but also a matching sparkling panel at the passenger side of the fascia. At the car’s the front end, even that Parthenon radiator grille gets a subtle illumination after dark.

While the eight-speed automatic transmission of the old Ghost offered satellite assistance that “read” the road ahead, this new model goes one step further with camera-assisted active suspension, which helps iron out undulations and imperfections more completely than any set-up I’ve yet experienced. Oddly enough, however, none of this wizardry significantly detracts from a driver experience that, for a 5.7-metre-long motor car,
is more enjoyable and engaging than one could ever reasonably imagine.
Although necessarily light, the steering nonetheless transmits a decent sense of feel; add that to the helm’s surprising precision, plus, of course, the advantage of four-wheel steering (the rear wheels turn up to 5 degrees in either direction), and the Ghost can handle even narrow and twisting roads with ease. Granted it’s all relative and you wouldn’t call it exactly nimble, but its reactions and agility are extremely impressive. That goes equally for the manner in which the transmission and all-wheel-drive system deliver the V12’s horsepower and torque to the tarmac, moving the car more swiftly and effortlessly than any two-and-a-half-tonne behemoth has a right to.

Of course there are the idiosyncrasies we’ve come to expect from every Rolls-Royce: the doors that open the “wrong” way, the too-thin steering wheel and the power- available gauge that deputises for every other manufacturer’s rev-counter. Ask why and the answer would likely be, “Because we’re Rolls-Royce.” Does it matter? Not a bit.

On the contrary, I’d argue that with the new Ghost, Rolls-Royce has been released from the restraints of reliance on BMW to create more than merely a very good car but one that could very well be its best and most well-rounded yet. Although I don’t see many owners of the new Ghost Extended pushing their chauffeurs out of the way to get their hands on the steering wheel, this is a Roller that begs – and ought – to be driven. Restrained, reduced and beautiful in a way its predecessor never was, it really is the Rolls-Royce for today.