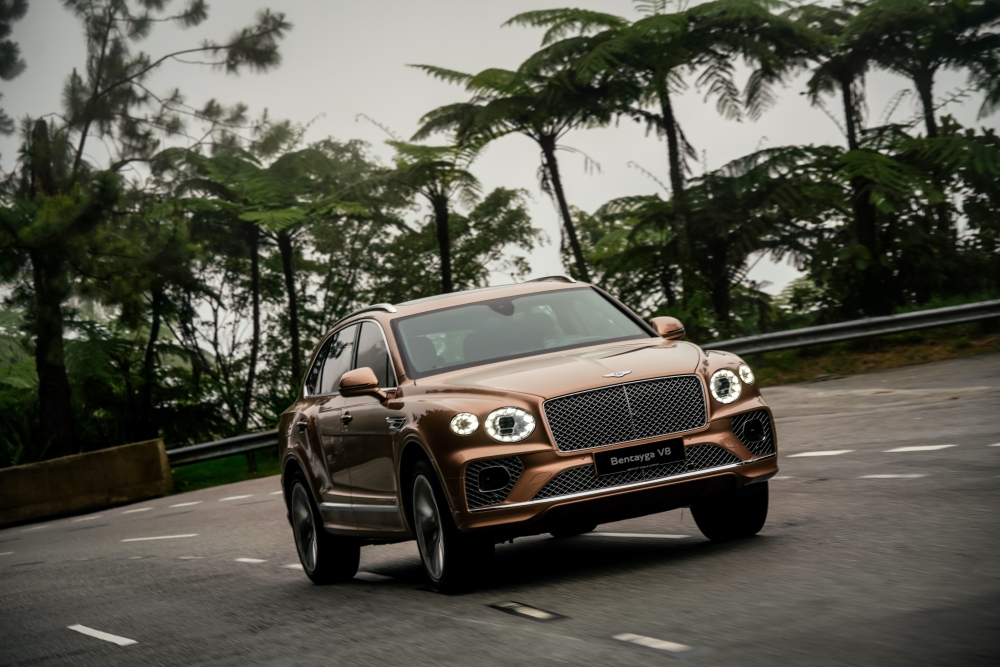 Behind the Wheel: Reviewing the Bentley Bentayga V8

Pursuits
Behind the Wheel: Reviewing the Bentley Bentayga V8
Share
Next article

The pinnacle of luxury SUVs — the Bentley Bentayga V8 — is here, proving it has what it takes to run with the big boys.

We mustn’t forget though, that luxury SUVs are a dime a dozen. We’re seeing many more carmakers coming up with their own take on luxury SUVs, in an attempt to dominate the spectrum. Lamborghini created major headlines when it first introduced the Urus, the first of its kind for the Italian brand. Rolls-Royce is another well-known name, showcasing just how luxurious an SUV can be with the Cullinan. Other notable big names on the list include the Porsche Cayenne as well as the Audi Q8.

Like any other Bentley, it is a sight to behold the moment you lay your eyes on it. Its new exterior design to both the front and rear adopts the marque’s new design DNA, which can be found on both the third-generation Continental GT as well as the Flying Spur.

Its most notable change comes in the form of the new matrix grille, much larger and more upright than ever before. It gives off a more dynamic and commanding presence, allowing its elegant bonnet to sweep downwards to the very edge of the chrome work. The all-new matrix grille is flanked by the LED elliptical headlamps, which carries the now-signature ‘crystal cut’ design. This gives the Bentayga V8 a touch of class and personality, allowing the headlamps to sparkle even when on standby.

But the biggest design change that you will notice is at the rear of the car. Much like the Continental GT, the Bentayga V8 sports matching elliptical tail lamps. It has a deep, three-dimensional glow thanks to its lattice pattern that offers a unique illumination appearance when turned on.

The Tech is Savvy and Superior

Of course, there is more to a Bentley than just its looks. A brand well-known for its fine craftsmanship, the cabin of the Bentayga V8 is all about bringing technological innovations together with an extreme level of comfort.

As you enter the cabin, you’re greeted with newly-designed seats that are further improved from the previous industry-recognised benchmark set by the marque. There are three versatile seating functions to choose from with the Bentayga V8 — a standard five-seater, a four-seater with a centre console, as well as a three-row, seven-seat arrangement. We got the chance to check out the standard five-seater, complete with an all-new seat frame that features a more sculpted shape to provide extra comfort.

However, the devil is in the details, of which there are many. The contrast and hand-crossed stitching on the upholstery add extra design detail to the cabin while rear-seat ventilation is also available in the five-seater variant. Whether you’re driving or being driven in the Bentayga V8, you will not miss out on the level of comfort that comes with the car. To further increase your chances of never leaving the cabin, each seat comes with its own massage chair function.

If that isn’t enough to entice you, perhaps its advanced technologies will. On the new and redesigned centre fascia is the latest-generation 10.9-inch infotainment display with an advanced navigation system as well as Apple CarPlay and Android Auto. Audio also plays a big part in the Bentayga V8 with the option to include the Naim 20-speaker system. Rear passengers also have control over the infotainment system via the new touch screen remote control tablet.

The Ride is Smooth and Very Powerful

When it comes to its performance on the road, there’s no doubt that Bentley knows what it’s doing. At the heart of this luxury SUV lies its 4.0-litre, dual twin-scroll turbocharged V8 engine, pumping out 542hp and 770Nm of torque. It can do the century run in just 4.5 seconds while hitting a top speed of 290kph. While we could not put the Bentayga V8 to the test on both avenues, it’s safe to say that it is capable of hitting over 200kph without breaking a sweat.

Of course, it is worth noting that at the time of the drive, we were in a left-hand steering Bentayga V8 as opposed to the right-hand steering. While this definitely took some getting used to, the driving features that come with the car made it all the more worthwhile.

One of the more notable features is the Bentley Dynamic Drive, the world’s first electric active roll control technology provides greater linearity as well as reducing steering effort. What this does is that it counteracts lateral rolling forces when cornering, ensuring the tyres make full contact with the road to ensure comfort, stability, and handling. This works great even on uneven roads as the Bentayga V8 does all it can to ensure a smooth drive.

Safety is also an important feature in the Bentayga V8 — cruise control can be easily set from one of the knobs on the steering, allowing you to fully focus on the handling and letting the car handle the drive. Lane watch assist is also present, keeping you in check of your surroundings and making sure you stay within the designated lines. If you were to even slightly veer off-course, the car’s built-in artificial intelligence (AI) is capable of correcting your flight path as well as braking on time.

You can tell how much detail went into the Bentley Bentayga V8 just by looking at it. Being the first car to be launched under Bentley’s Beyond100 business plan, there is more to come for the Bentayga. It comes out to RM743,900 before duties, tax, and registration, and you will never find another luxury SUV quite like this. Its powerful, nimble, and very pleasing on the eye; a definite head-turner from the moment the engine roars to life.

All images courtesy of Bentley.

Sign up to get the latest luxury and lifestyle news delivered to your inbox.
Wi-Liam Teh
Motors