Pursuits
Bruce Scott
Sign up to get the latest luxury and lifestyle news delivered to your inbox.

In a special Facebook live broadcast, Cavallino Motors unveiled the most powerful “prancing horse” ever.

On the afternoon of Thursday May 28th, 2020, Cavallino Motors, the sole and official importer of Ferrari in Thailand, dazzled online viewers with the unveiling of the SF90 Stradale. This exciting event, designed and staged in compliance with the Thai government’s current social distancing mandates, got underway at 2pm sharp and was live streamed on Cavallino Motors’ Facebook Official page. It wasn’t quite like seeing this ferocious supercar up close and in-person but it was definitely the next best thing. Pitipat Kootrakul acted as emcee of the 45-minute presentation, introducing viewers to a number of the key executives from Cavallino Motors. Voravud Bhirombhakdi, Vice President and Executive Director of Cavallino Motors Co., Ltd., spoke about their newly-renovated service center, which underwent a major facelift to coincide with the company’s 10th anniversary of being the sole official importer and service provider of Ferrari in Thailand. “This mainly aims to emphasize our service excellence, to fulfill our customers’ needs and to provide an even more convenience at service center by adding over 1,200 sq.m more service area, resulting in a total space of 7,200 sq.m and making it one of the world’s largest showrooms and maintenance service centers,” he said. Another presenter was Nantamalee Bhirombhakdi, Managing Director of Cavallino Motors, who told viewers about the significance of the car’s name. “The number ‘90’ refers to the 90th anniversary of Scuderia Ferrari racing team in Formula One,” she explained. “The SF90 Stradale model is a perfect example of Ferrari’s brand thinking, whereby they are able to adapt their knowledge and convert their expertise in racing cars on racing tracks, and put it into a car designed for the road.” 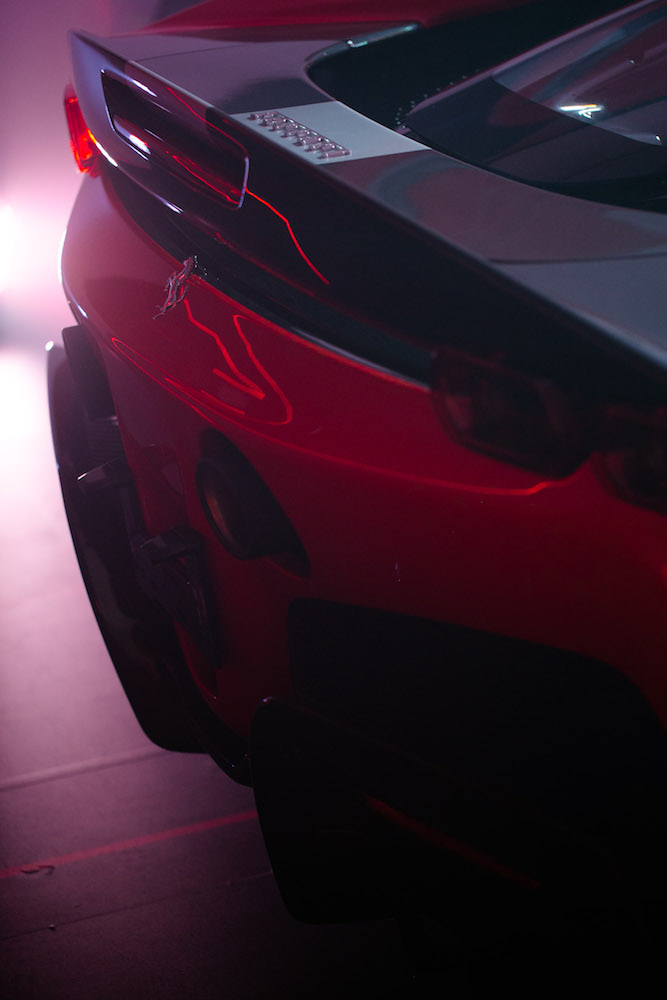 To whet our appetites for what was still to come, viewers were presented with a slick video presentation showing the SF90 Stradale in action. Described as “beyond the best V8 ever”, this new model represents a true paradigm shift for Ferrari, delivering unprecedented performance that includes stop-start times of 0-100km/h in 2.5 seconds, and 0-200km/h in just 6.7 seconds. Add to that 390kg of downforce at 250km/h, and a maximum speed of 340km/h, and it’s no surprise the vehicle’s tagline is “Beyond Imagination”.

Aided by cool graphics, Tupnaputt Tamwiwat, Director of Business Operations at Cavallino Motors Co., Ltd., explained a bit about some of the supercar’s new and innovative features. Perhaps the most significant feature is that the SF90 Stradale is the first ever Ferrari to have PHEV (Plug-in Hybrid Electric Vehicle) architecture, in which the internal combustion engine is integrated with three electric motors. It’s also the manufacturer’s first sports car equipped with a 4WD system, and overall it delivers a whopping 780cv (ICE) – coupled with 220 cv (Electric) – making it the highest power output of any 8-cylinder in the history of Ferrari. Other innovations pointed out include the new dual clutch 8 gear shift, multimaterial chassis (aluminum chassis with a carbon fibre rear wall), rear carbon fibre spoiler, and a specific rear hood lexan with iconic louvres. On the dash, meanwhile, the Stradale boasts touchscreen commands and gives the driver a 16” full-digital, freeform and curved cluster. Finally, at just under the half hour mark, it was time for Nantamalee Bhirombhakdi and Voravud Bhirombhakdi to pull back the silk sheet and finally reveal the shiny red SF90 Stradale parked in the showroom. As the flashbulbs flashed, a small group of specially invited VIPs came onstage to have their picture taken with this beautiful automobile. Following the photo session, Pitipat Kootrakul returned to give viewers a close up look at the stunning outer detailing as well as the jaw-dropping interior.

Be among the first to discover the most powerful “prancing horse” car ever, from May 29 until July 26, at the Cavallino Motors showroom on New Petchburi Road.

#PrestigeRecap: Ferrari Unveils the 812 GTS and F8 Spider in a Live Streaming Event

Bentley Bids Farewell to its Revered Mulsanne Badge with its 6.75 Edition

In this segment of #PrestigePerspective, we visite