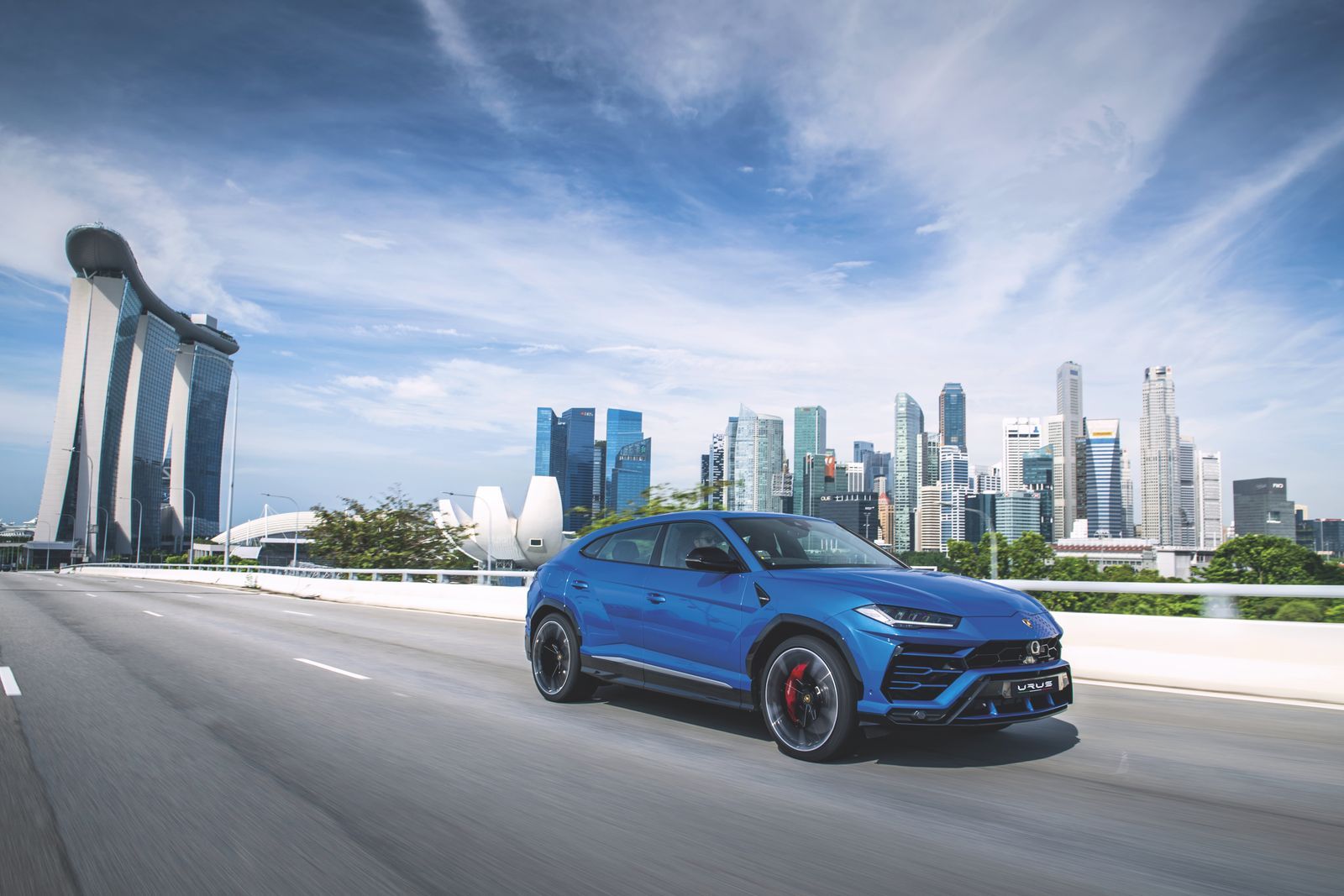 You can get it in Rosso or Giallo. You hit 100km/h from a standstill in a mere 3.6 seconds. You hold rein over 650 horses and can hit a top speed of 305km/h. And you will get four doors, room for four passengers, and have two (two!) cupholders among other mod cons sacrificed in most supercars.

The Urus may be Lamborghini’s answer to an everyday car, but it’s no everyday  car.

For one, the current chances of crossing paths with this sporty behemoth on our roads are about as slim as spotting a snow leopard in the wild, given that just 43 have been delivered as of end-May. And it’s specced out like an exotic car, allowing Lamborghini to tout it as the world’s first super SUV and first five-seater super sportscar.

One could easily pass a parked Urus – especially if it’s in a shrinking hue such as grey or black – without giving it a second glance. But, no chances of that happening when this 5m-long bull is charging down the road. In Sport mode, it’s also making all the sounds a Lambo should make to announce its arrival. And the Urus I’m testing is bedizened in the brilliant metallic Blu Eleos – an option that adds $56,000 to the tag – which takes an almost cerulean gleam in the sun and makes it appear larger than life.

Cars ahead of me on the highway are getting out of my way even with some 50m between us. This is going to be fun.

Not your average SUV

The Urus’ sexy, coupe-style lines are very becoming of a sportscar maker – none of the boxy, wagon-like styling of many luxury SUVs here. It stands at 1.64m tall (roughly 6cm shy of the Porsche Cayenne, the original “sportscar for five”), but I’m getting a thrillingly inflated sense of altitude in the cockpit. The narrow heights of the windows might also be creating all sorts of parallax errors.

Considering the rigid seats I never found the pleasure of enjoying in past Lambo rides, I feel almost snuggled by the Urus. God, these seats are plush. Their dusky-red fine leather (blue exterior, Rosso Rea seats – somehow, the combi works) is echoed on the door panels, dash and the lid of the centre storage console, which you can pop your phone into for wireless charging. Cool. Also cool: like F.R.I.D.A.Y. to Tony Stark, the Urus reminds you if you’ve forgotten to take the phone with you when you leave. There are also USB ports, and Bluetooth Apple CarPlay and Android Auto connectivity.

Unlike every other single Lambo, getting in and out isn’t a struggle in agility or modesty, if in a skirt. Headroom in the front is ample – and I’m above average height; taller back-seat passengers might appreciate how the spacious legroom will let them slouch down to avoid mussing up their hair against the sloping ceiling. I fail to ask my two rather, um, vertically challenged friends (for one of them, the car’s bonnet is at chest level and the haunches, above her shoulders; no, she is not 12) who jumped in for a joyride if any literal jumping in was involved.

Besides that long, brawny bonnet that houses a tuned-up version of Audi’s 4L V8 engine (also used in the Audi RS7, Porsche’s Cayenne Turbo and the Bentley Bentayga), the Urus has a drawn-out frame that allows for boot space enough for two large pieces of luggage. Or 35, 40 pairs of shoes, by my low estimate; 150 if we’re talking clear stackable shoe drawers.

With its flat bench seat at the back, the car’s five-seat configuration offers more people- and cargo-carrying flexibility (the seats fold flat to expand trunk capacity from 616L to 1,596L). However, you might want to offer your passengers the luxury of not being tossed around during less-than-genteel driving.

As we take a corner at speed, passengers’ hands instinctively reach for grab handles but grasp at… nothing. Opting for two individual back seats will ensure human cargo is well ensconced in bucket seats, and the four-seat configuration includes a roomy centre console that can better anchor them against centrifugal forces.

I am amazed when the car goes from Strada (Street) to “Airplane mode” as it takes a small kink in the road in a sharp bend. It seemingly levitates after absorbing the bump, floating on a cloud – even on fierce 23-inch Taigete Diamond Finished rims (21 is the factory fit).

With city driving, the consolation of coming up against lumbering road hogs and stop lights is in letting your Lambo raise racket for you as it spits out cackles and pops in its downshifts. The pleasure is in seeing other cars shrink away in your side mirror – and the crack of the rear view – with a light touch on the gas. So well insulated and smooth a cruiser is the Urus that, more than once, I glance at the speedo and realise I’m going above 160km/h – when it feels like 70km/h – and activate those humongous carbon ceramic brakes (17.3 inches on the front wheels, 14.6 on the back). The largest brakes ever on a production car, they can bring this 2.2 tonner to a stop from 100km/h within 34m.

Despite its length and 3m wheelbase, four-wheel steering makes slow-speed turns more manageable, with a 5.9m turning radius. I’m more conscious of the car’s 2m girth and having to park this baby. I barely make it through a crowded hotel driveway lined with supercars, only to be rejected by the valet, for a lack of space. Morosely schlepping it to the car park where I have a choice between parking next to a Huracán “Batmobile” and a Rolls-Royce, I choose to head one basement level down to park – head in, in the middle of three empty lots.

Back home later, reverse parking is nerve-racking despite the parking camera. The frenetic beeping from the sensors even when there’s ample allowance (yes, I got out to check) drives me crazy, and finding the right-side paddle to engage Drive is confusing when the steering wheel has done a few turns. Not sure if I’ll ever be a fan of wheel-mounted paddles.

Parking is no fun, but driving a supercar in the guise of an off-roader or family car is. And that has won Lamborghini a whole new pack of fans – worldwide, 70 percent of Urus buyers are first-time Lamborghini buyers. In Singapore, the automaker more than doubled its sales in 2018 and pipped Ferrari by one to become the bestselling super luxury sportscar brand with 38 units sold, of which 13 were the Urus. Given its limited production and million-dollar tag with COE in, it is never going to be as ubiquitous as the Cayenne though.

With the Urus’ in-your-face personality, I find myself going out of my way not to be that obnoxious driver – not tailgating the slowpokes or revving at the stop light (well, just that one time…). I feel extra considerate, turning off the Y-shaped LED headlights when crawling along a drive-through – it’s enough having this Lambo’s snarling face fill their rear view.

The Anima selector offers six different driving dynamics, as well as an ego mode custom-tuned to your steering, traction and suspension preferences. Alas, I was told in no uncertain terms not to engage Corsa (Race) and to stay away from road situations that would necessitate the Sabbia (had I found sand dunes to conquer), Terra (off-road) or Neve (snow!) modes for this test drive.

So post-McD’s supper, I test the limits in a large car park. But whose limits am I testing? I have to concede: Mine. In the belly of the beast, flooring the pedal is one thing, but keeping my foot down? Not easy, with this flutter in my chest. Am I imagining G forces, or sheer terror at the possibility of running out of runway with the needle just under 200? Or is it embarrassment at tearing up the night with diabolic decibels? Save me from the bull, I am that obnoxious driver.

The Lamborghini Urus at a glance