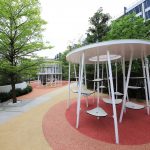 You could say that he has always tried to keep an element of play in his professional life. In his early days, Blitz was a semi-professional skateboarder, on the payroll of brands in the sport that included Californian label Santa Cruz.

After moving into playground design more than two decades ago following architectural studies at the University of Amsterdam, Blitz founded Carve in 2002. He and his team (currently numbering 12) have turned their hands to public and private projects across Europe, North America and Asia. With more than 20 awarded projects, jewels in their crown include outdoor play areas in Gardens by the Bay in Singapore, and sprawling Melis Stokepark in The Hague in Holland (both combinations of interwoven grassy slopes, timber walkways, sand pits, climbing towers and slides – interspersed with tropical forest in the Singapore project’s case).

Commissioned to create indoor play areas in the clubhouses and play features within a shallow outdoor children’s pool at soon-to-launch Mount Pavilia – a 680-unit luxury residential project by New World Development in Clearwater Bay – Blitz was on site in Hong Kong last month. His indoor area in this project is a mostly white, cream and pastel palette of cushioned chairs and tables at which to play games, and a giant doll’s house with Dutch architectural influences into which kids can climb via a ladder. The outdoor pool has a climbable water fountain and an oversize submerged game grid with segments that illuminate.

Asked if he has any signatures or constants in his designs, Blitz says, “It wouldn’t be the materials but the intention, I would say. We always try to be non-directional in our designs, so that children can think for themselves.  We always like to keep freedom of movement and to encourage communal playing, I try to never go for the features that children will see in every playground – like see-saws or straight slides. These encourage individual play, which is fine but I’d like the children to feel that they could easily also just join in with other kids who are playing. We also want to give the best chance for lots of different types of playing with our equipment, so that children can invent their own games.

“The equipment is not the most important thing. It’s making a space that’s dedicated to children, that they’ll recognise as their own space and that will totally engage. Of course there are always other practical concerns, like keeping surfaces soft around raised areas, shade in hot sunny climates and barriers around play areas if traffic is nearby.

One piece of equipment that Blitz is proud of, he says, was a vertical wall with crevices and holes that could be scaled in a schoolyard, created by Carve in 2005. The most recent standout project for Blitz himself was constructed on the site of an old coal mine, completed in 2016. The multi-use renovation in Beringen, Belgium is called Be-Mine. “We built a concrete play area with a 45-degree inclination that reaches a height of 65 metres,” he explains. “It had to be built on top of a lot of materials that were excavated from the mine. The surface is all concrete but made of material that is, of course, safety-compliant. Children – and adults in fact – can climb these unusual concrete shapes that cover one part of this hill [the rest of it has been turfed and now sprouts grass].”

So which other designers in the realm of play spaces does he most admire? There are not so many in this field, he notes, but the late Aldo van Eyck is at the top of the Blitz list. “He did a lot of work for the municipality of Amsterdam in the 1960s and ’70s – he built about 700 playgrounds,” he says. “Aldo developed a language for play equipment – they look a bit like igloos; tubes that can be slotted together.” Another favourite is the late Japanese American artist and landscape architect Isamu Noguchi, who designed several public gardens and playgrounds in the second half of the last century that contain colourful geometric forms. “He designed some wonderful playgrounds before the Second World War that were built in the 1950s – they’re exceptional and would be considered modern even today,” says Blitz.

Digital devices, a prime distraction for children and the curse of many a parent or teacher these days, are not a huge concern for Blitz. “Just go somewhere without
Wi-Fi,” he says. “They’ll hate it for two hours – but then they’ll find other ways to play,
like we used to.”