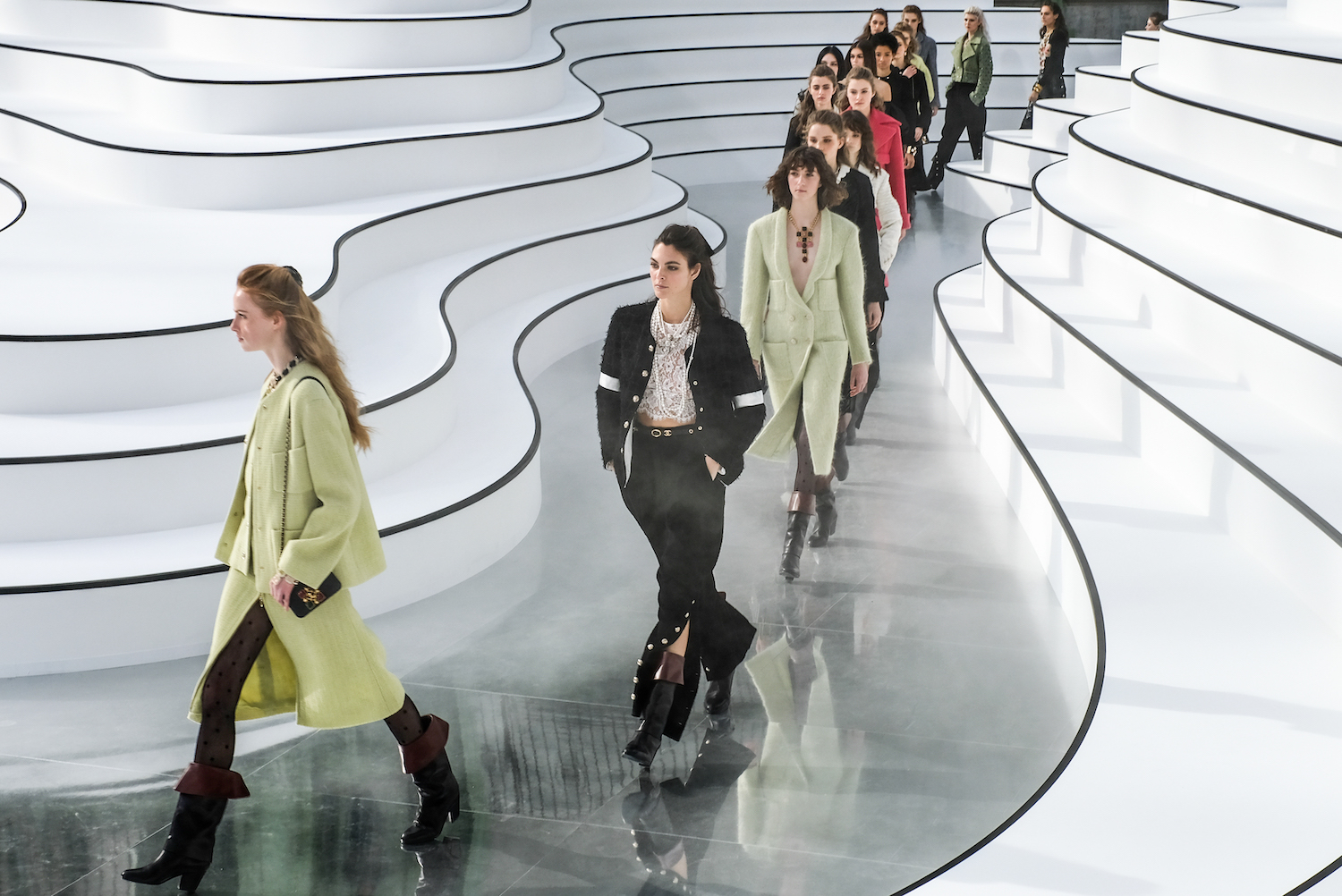 Chanel Fall/Winter 2020 Signifies the Start of a New Era

At Paris Fashion Week, Chanel designer Virginie Viard put an end to the brand’s themed runway spectaculars, a year after the death of her legendary predecessor Karl Lagerfeld.The German showman spent millions turning the vast Grand Palais into his playground, building a Chanel space rocket, a near life-sized ocean liner, the Eiffel Tower, a tropical beach and the Verdun gorges —complete with waterfalls — as a backdrop for his extravagant shows. The more understated Viard, however — who was also his former right hand woman — strongly suggested on Tuesday that that era may be over.

“There is no frame for the show,” she said simply, “I don’t like that which is framed.” The French creator, who took over from Lagerfeld shortly after his death aged 85 last February, sent out a mostly black and white collection, thin on the traditional tweeds that Lagerfeld relied on. There were also very few dresses, with jewellery riffing off a square cross reminiscent of Madonna’s glory days, making the big glamour statements.

Instead, Viard returned to the roots of the Paris fashion house founded by the horse-mad Gabrielle Chanel, with slashed jodhpurs, folded down calf-length musketeer boots and billowing side-buttoned leather trousers that resembled riding chaps and black suede jockey hats. Skirts were also slashed, sometimes up to the hip with Viard saying she was after movement, “freedom, energy and absolute desire”. Possibly one of her biggest innovations was putting snap buttons on Chanel jackets for the first time, to free up the wearer and allow “a more lively gesture”, she said.

Viard said the equestrian theme was also partly inspired by a photo of Lagerfeld in a striped suit and riding boots, but she also drew ideas from the Claude Chabrol’s French film classic, the 1968 chiller “Les Biches”, about a lesbian love triangle. The show began with two typically chic Parisian friends walking arm in arm, “as feminine as they were Amazons”, Viard insisted, and closed with a trio of more pop looks based around crop tops and hotpants under long overcoats.

While the New York Times critic Vanessa Friedman sounded a note of scepticism about the latter — worn by the supermodel trio of Gigi Hadid, Mona Tougaard and Hyun Ji Shin with spotted tights — Viard insisted the collection was about “a very simple, very pure momentum.

While fears of the coronavirus prompted one fashionista to wear a customised camelia face mask — the flower was Coco Chanel’s favourite — masks have been a rarer sight in Paris than during Milan fashion week that preceded it. Light relief was provided by striking French lawyers who, dressed for court, staged their own alternative runway show outside the Grand Palais carrying placards declaring, “The only black gown you will ever need” — a cheeky reference to Chanel’s iconic little black dress. Scroll through the gallery below to see all the looks.

This story was first published via AFP Relaxnews. All images courtesy of Chanel.