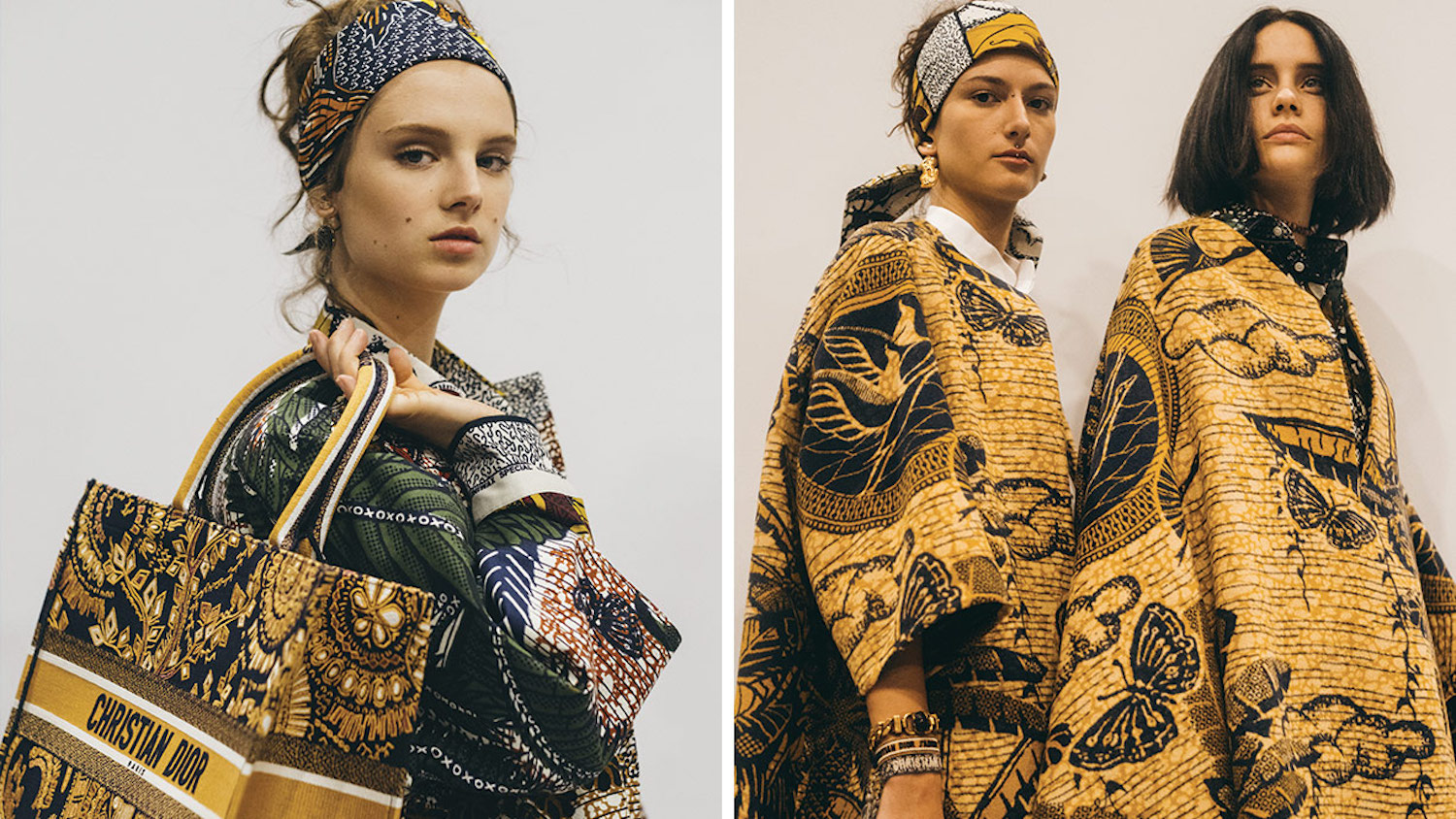 What You Need to Know About the Dior Cruise Show 2020

If you have been on social media at all in the past two days, chances are you would’ve seen society’s most prominent faces, from global digital influencers to media veterans and iconic figures in fashion, en route to Marrakech. That was where, on the eve of Monday April 29, creative director Maria Grazia Chiuri presented her Cruise 2020 collection for Christian Dior. Set against a backdrop of majestic salmon pink walls and hundreds of glistening torches, this particular show stood out amongst the rest not only for its utter spectacularity — though there is definitely something to be said about the extent to which Dior went in order to create an experience that was so one-of-a-kind — but for the meaning behind the collection itself.

In a new age of cultural sensitivity, the line that separates cultural appreciation from cultural appropriation has only gotten finer. While fashion tends to either miss-step or avoid the line altogether, Chiuri boldly confronts the tension head-on with her Cruise 2020 collection, titled ‘Common Ground’. She brings on board an anthropologist as her consultant, and reminds us that incorporating a respectful, thoughtful and non-exploitive approach to cultural exchange is better than to limit all discourse and references in order to avoid possible criticism. A collection that brought to light key red-button issues in the fashion industry, here are the key things to know about the Dior Cruise 2020 — or, alternatively, the reasons that made it Dior’s best show yet.

Dior really went all out.

From a Dior juice stand at the venue to personalised pillow cases embroidered with the maison’s logo, no detail was overlooked. There was even a Dior-themed private plane — yes, complete with ‘Dior Cruise 2020’ air tickets, headrests and even hand-towels — transporting guests to Marrakech for an unparalleled experience. True to Maria Grazia Chiuri’s goal of offering an intellectual reflection on the industry, the detailed touches went beyond exciting Dior-imprinted merch, and also took on levels of significance.

Lining the benches were cushions embroidered by local female weavers, and on every seat at the show was a quote by Tahar Ben Jelloun — “Culture teaches us to live together, teaches us that we’re not alone in the world, that other people have different traditions and ways of living that are just as valid as our own.” It was really the accumulation of these little touches that made the show so jaw droppingly distinct. We’ve personally got our sights set on the dining plates, embellished with the Christian Dior signature — now, Dior, how can we go about getting our hands on those to take home?

The show took place in a beautiful ruined palace.

Marrakech has become a must-visit travel destination as of late, and it seems Dior got the memo. After two days spent exploring the city’s palaces and landscapes, guests were invited to the Palais El Badi for the show itself. Known as Marrakech’s most beautiful ruin, the phrase ‘El Badi’ refers to “the incomparable”.

Since its creation in the 16th century by sultan Ahmad al-Mansur, the majestic structure has since become what is now a fortress of terracotta colonnades, with paths running past sunken gardens and long stretches of still water. Come evening, guests sat outside by these waters, upon which floated over 3000 glowing candles for a truly dreamy result — and it was here, flanked by these majestic relics, that the Dior Cruise 2020 collection was unveiled.

This isn’t the first time we’ve seen Marrakech in Dior.

This was a show that hit close to home for both Maria Grazia Chiuri, and the fashion house itself. To Chiuri, the collection brought about a cultural exchange between Dior’s stylistic roots and the pan-African design approach she has long admired, while for Dior, the venue is actually deeply rooted in the brand’s history. Back in 1951, Christian Dior had created a design inspired by the colours of the city, and when John Galliano spearheaded the maison’s creative direction from 1997 till 2011, signs of Moroccan influence were constantly visible in the brand’s collections. The most obvious connection between Dior and the city is the ivory ‘Marrakech’ coat, designed by Yves Saint Laurent for the house in 1960 — a piece that today can be found in Saint Laurent’s Art Deco villa.

The collection was embedded with messages of cultural exchange.

With origins in Indonesian batik, before traversing between Europe, Asia and throughout Africa, wax fabric is perhaps one of the best examples of a globalised textile. For Common Ground, Dior went to Africa, took this fabric and put it out on the runway as a representation of the fashion house — a bold move that could have either gone really well, or really badly.

It was a feat pulled off through Maria Grazia Chiuri’s effort in involving African artisanship in her work, and giving it the recognition it deserves. Instead of creating “inspired by Africa” clothes, Common Ground celebrates the coming-together of different cultures, and brings to light Dior from another perspective. It doesn’t give you something that “looks African”, but instead provides the result of something that truly is African — classic Dior prints from the toile de Jouy to the tarot card prints were reinterpreted through African textiles, and the resulting line is one that can be worn and appreciated by anyone, because it is about bridging the gap between the continents in the world.

Collaborators included artists, craftswomen, and even anthropologist Anne Grosfilley as a consultant.

When it comes to the unveiling of new collections, most designers find comfort in having a luxury stylist or even a muse as a guide through the creation process. Not Chiuri — for Dior Cruise 2020, she opted to join hands with French anthropologist Anne Grosfilley, bringing on the expert on African textiles as a main consultant. It is through Grosfilley that Chiuri came to know the world of wax fabrics, which became a pulse for Common Ground, and it is also through Grosfilley that Chiuri was introduced to Uniwax — a factory in the Ivory Coast, with expertise in creating the handmade print patterns that lines the fabrics.

Not only did Chiuri join hands with Grosfilley, and commission Uniwax to remake prints in wax using local skill and creativity — she also invited a number of specialists, including African-American artist Mickalene Thomas, British-Jamaican designer Grace Wales Bonner and South African shirt-maker Pathé’O. The headpieces and turbans were courtesy of Stephen Jones, in collaboration with Martine Henry and Daniella Osemadewa, and even the show’s theatrical scenery was curated by Moroccan Sumano — an association that aims to bring back the traditional tribal women’s crafts, from weaving to pottery painting.

Peter Philips did the makeup, and it was all made-to-measure.

For Dior’s Cruise 2020 collection, the makeup looks were created by none other than Peter Philips — creative and image director for Dior makeup. Inspired by the beautiful setting of the El Badi Palace, as well as the wide diversity of skin tones on the runway, Philips created looks through using natural, made-to-measure makeup. Dior Backstage Face and Body foundation was used — a line that contains 40 different shades, meaning Philips was able to create a perfect match for the complexion of each girl — while even on the eyes and lips, the lines used were all designed as universal neutrals. The resulting looks were pure, luminous and focused on each model’s unique, individual beauty.

The guest list took star-studded to the next level.

With faces going from Jessica Alba to Jeanne Damas, Karlie Kloss and Lupita Nyong’o taking up the front row, the Dior Cruise 2020 show was a perfect representation of Dior savoir faire.

If you weren’t able to attend yourself, chances are you’ve already lived the experience vicariously through the social media handles of the prominent guests in attendance. After all, is it really Dior if the guestlist isn’t peppered with society’s finest?

Diana Ross performed at the after party.

Diana Ross — need we say more? An dazzlingly impressive showbiz move, Dior brought in none other than fabulous 75-year old songstress for the aftershow entertainment. Dressed in Dior haute couture, she provided audiences away with a remarkable finale, performing iconic hits like Ain’t No Mountain High Enough and Upside Down.

The most important thing? The message and its impact.

There will perhaps come a time when fashion is no longer dominated by the cultures of Europe and the United States — when the boundaries that define ‘mainstream’ are finally able to move further beyond and touch upon the nuances that exist out of what we today — unfortunately — occasionally misunderstand is everything. When that day comes, the Dior Cruise 2020 show could be among those that we will look back on and cherish — for its ambitious bravery in trying to achieve fashion that is truly inclusive, not only in the models or the designs but also the process through which the collection was formed. For such a globally-renowned French maison, the easy — dare we say, PR-driven — way out would have been to pull out a few less-controversial references, but instead Chiuri chose to go further. The result? A collection that aims to draw attention to the craftsmanship of an entire continent, and remind us that maybe the simple attempt of reaching out beyond so many borders to create something beautiful between different cultures is enough of a first step.

Click here to find out more about the Dior Cruise 2020 collection, or to see the full show.