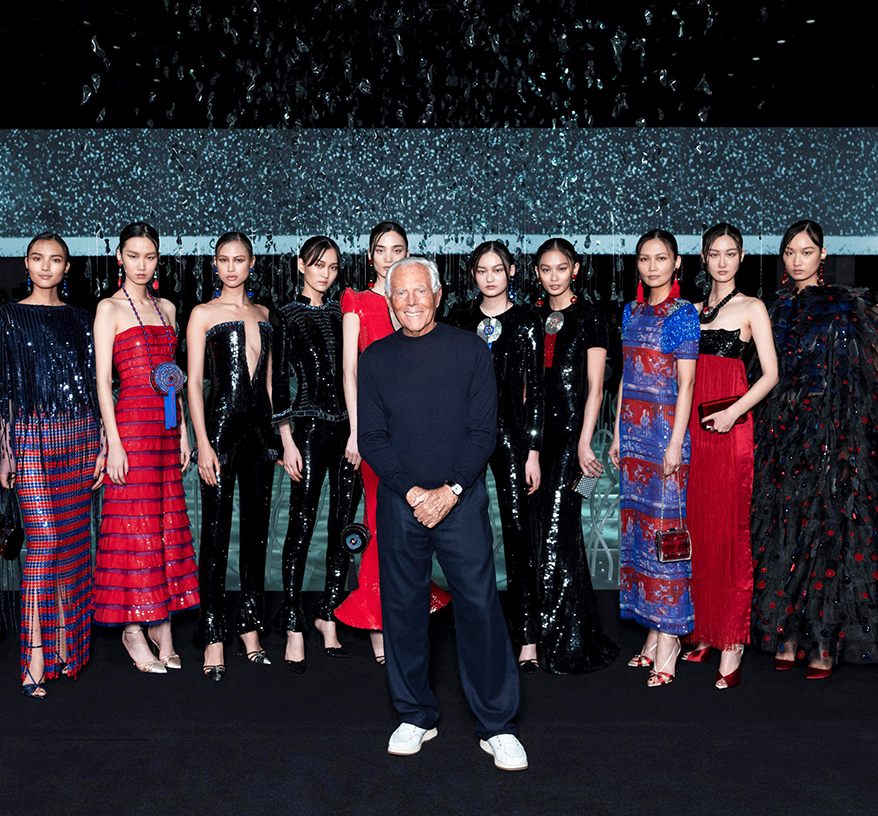 Style
Explore the history of Giorgio Armani, the designer and business mogul
Share
Next article

We explore how the man and mogul, Giorgio Armani has impacted modern fashion and lifestyle.

2020 has been a year of change, revolution and disruptions to the old ways of things. It leaves us all wondering what will be the new normal. In uncertain times, however, there’s a comfort to looking towards things that have withstood the test of time – surviving and thriving throughout the years, not least in the world of fashion.

So, we’re raising our champagne glasses to a mogul of style, Giorgio Armani, a true pioneer who’s impacted both menswear and womenswear, and created a business empire and a fashion lifestyle that’s lasted decades. Celebrating the man and the brand, as well as the timeless styles he has spawned, 2020 marks 45 years of a progressive legend.

There can be few living menswear figures who have impacted popular culture as much as this Italian designer and billionaire. Since he launched his label in 1975, Armani has become the European emperor of men’s fashion, with a brand whose influence extends far beyond the runway.

Womenswear came, too, with well-heeled ladies attracted to his confident lines and powerful statements. Additional investment and expansion moves later led to children’s fashion, a younger Emporio Armani line, as well as Armani Privé, the couture line. His pioneering spirit has also been on ethical issues, going fur-free in 2016 and being the first to ban women with a BMI of under 18 from his runways following the death of an anorexic model.

Armani studied medicine and served in the military before embarking on a career in fashion, his first design role being at the house of Nino Cerruti. Armani founded his own brand in 1975 with Sergio Galeotti, and has since been honoured repeatedly over the decades for design, creativity and promoting Italian craft by institutions such as the Royal College of Art, the CFDA, the Italian government (which elevated him to Grand’Ufficiale dell’Ordine al Merito della Repubblica) and the French government (he was awarded the Legion d’Honneur in 2008).

The aesthetic has remained steady and true to Armani’s own design ethos, with precise, sharp lines and a dash of old-school Italian elegance always evident. There are seasonal angles, naturally, with the latest autumn/winter 2020 women’s collection including an ode to China (a country where he’s been hugely popular since Western luxury labels first landed). The finale, in an empty show space in Milan (due to Covid-19), saw a line-up of Chinese models in Armani Privé archive pieces from 2009 and 2019, in a symbol of solidarity for the current times.

There have been countless red carpets and celebrities, of course – it was Armani himself who pioneered the concept of red-carpet dressing. Film easily became another forte, with Armani working on more than 200 of them and creating some epic fashion moments on celluloid for Richard Gere in American Gigolo and Kevin Costner in The Bodyguard, as well as early-’90s power suits in Martin Scorsese’s The Wolf of Wall Street and Christopher Nolan’s Batman. Whether it was handsome heartthrobs or anti-heroes, Armani’s fashion defined a look of a period and a male sartorial film culture.

The empire is huge – aside from fashion, accessories, fragrance and footwear, there are also successful lines of homeware, cosmetics, florals and even hotels. In a time of fashion conglomerates, billionaire Giorgio Armani has stayed independent with mogul status cemented. After 45 years at the top of the game, he remains the sole shareholder of Giorgio Armani Spa.

Sign up to get the latest luxury and lifestyle news delivered to your inbox.
Fashion designer Style Giorgio Armani
Jing Zang
Giorgio Armani