Most Iconic Bond Girl Outfits Through the Years 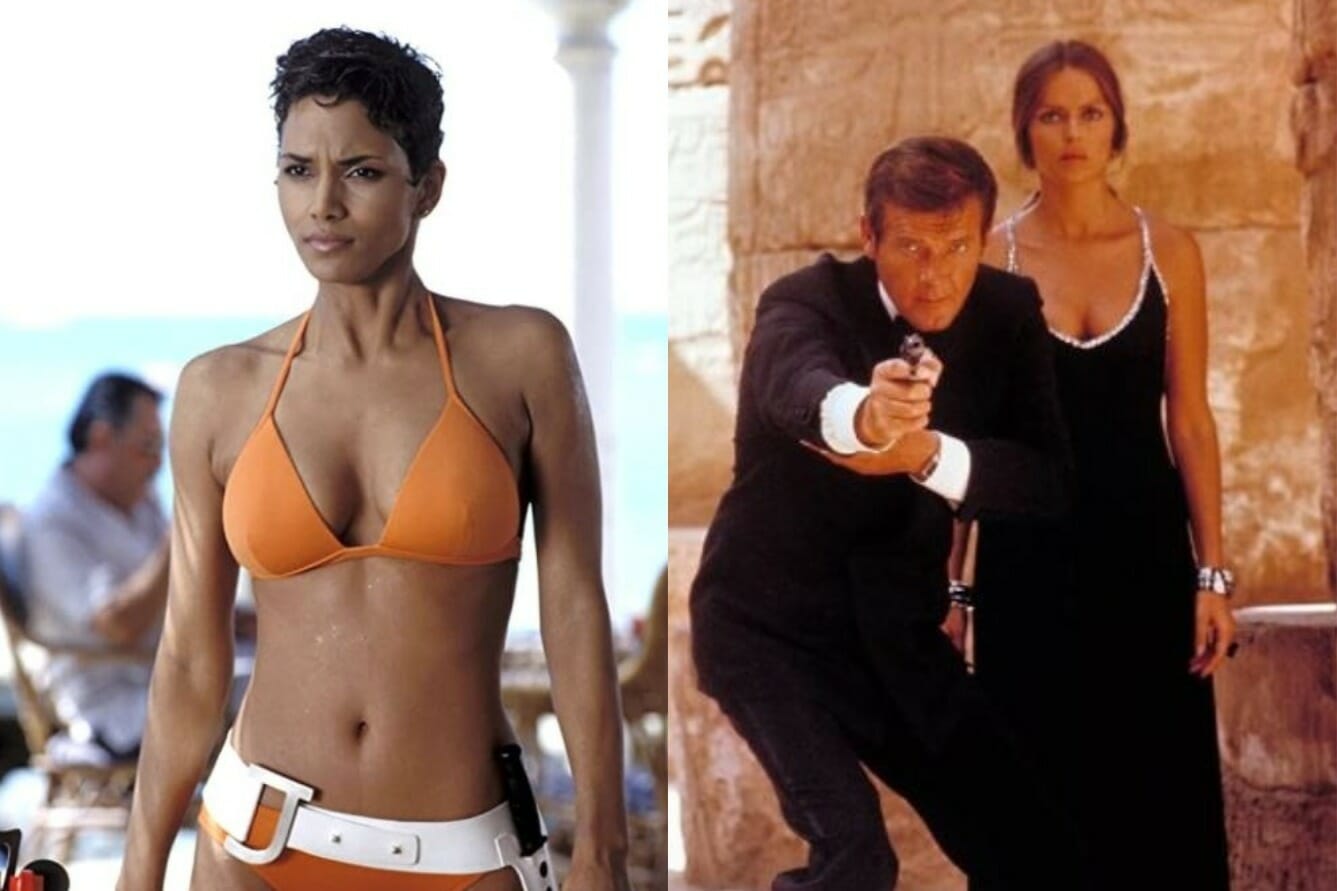 Bond girls may have come and gone over time, but their sense of style has prevailed. Fashion-forward outfits have always been part of Bond films, and they have been used repeatedly to grab attention on various occasions throughout the era of James Bond. Be it tailored-made chic suits of 007 or the gorgeous gowns and swimsuits worn by Bond girls, films in this franchise have always set a fashion statement.

From Ursula Andress in her history-making white bikini to Eva Green in Versace and Roberto Cavalli’s full-length body-hugging gowns and Léa Seydoux in the satin dress, these Bond girls have worn many iconic outfits that have left a mark on the cinematic history when it comes to fashion.

And if the movie stills and trailers are to go by, the Bond girls in No Time To Die are ready to serve some looks we won’t be forgetting anytime soon.

For now, let’s take a look at some of the previous iconic Bond girl outfits that have set some pulses racing and fashion trends.

It only makes sense to start the list of the most iconic Bond-girl outfits with the first movie from the franchise — Dr. No. Fans of the James Bond film till today associate the modern-day femme fatale role with the world-famous white bikini, which also helped Andress make sartorial cinematic history.

Honey Ryder, played by Andress opposite Sean Connery as James Bond, emerges from the Caribbean Sea in the 1962 film in an ivory two-piece bikini — an image that has been etched in the minds of many. Honey’s outfit flaunted her carved figure as she teamed the lower half of her white bikini with a wide, brass-buckle belt and a scabbard to carry a large knife.

It was Andress, along with director Terence Young and costume designer of the film Tessa Welborn, who came up with the idea of the bikini sporting a knife holder. Later, Andress auctioned the bikini.

Forty years after Honey Ryder graced the silver screen with her audacious outfit of the time, Halle Berry as Jinx in Die Another Day walks out of the ocean in something similar, as Pierce Brosnan’s James Bond looks on. The Bond girl wore an orange two-piece swimwear with a large white belted holster — a look inspired by Honey Ryder.

Designed by the French swimwear and lingerie brand, Eres, Berry’s halter-neck piece has become one of the iconic looks sported by Bond girls.

Maud Adams has been part of two Bond films. She had portrayed the role of Andrea Anders in The Man With The Golden Gun in 1974 and went on to play one of the leads, Octopussy, in the James Bond film of the same title.

One of her most iconic looks in the Bond film, part of which was shot in India, was a blue silk saree with a matching blouse. She had teamed the elegant six yards with a statement-making necklace and matching bracelets. The traditional Indian outfit was made by the designer Emma Porteous.

Caterina Murino played the role of Solange, one of the two Bond girls, in the 2006 James Bond film Casino Royale opposite Daniel Craig. The actress enthralled her fans as she stood in the gorgeous pomegranate silk dress. The Italian stunner’s character was hot and fiery and so was the dress in the Bond film.

The plunging neckline and narrow shoulder straps complemented the torso-hugging dress with a flowy bottom. The film’s costume designer, Lindy Hemming, teamed it with a simple neckpiece and a bag of the same colour.

While talking about the dress, Hemming said, “It was from Jenny Packham who made it in a colour of our choice. When we needed emergency multiples she had them made overnight in Hong Kong and urgently shipped to us in the Bahamas.”

In the list of iconic outfits worn by Bond girls, Barbara Bach has not one but two exemplary fashion-forward costumes in The Spy Who Loved Me. Playing the character of Major Anya Amasova opposite Roger Moore, the actress first slayed in her maroon jumpsuit that looked every bit divine. She teamed the halter-neck piece that also featured cut-out details at the waist with a pair of velvet boots in the same colour.

However, it was the navy-blue evening dress with a cross strap back and embedded Swarovski crystals on the bodice that stole the show. The thigh-high split dress designed by Baroness Franka Stael Von Holstein still serves as an inspiration for many designers.

Not long ago, actresses Priyanka Chopra and Anne Hathway were photographed in separate shoots, wearing a similar version of the dress. These dresses were made by French designer Alexandre Vauthier.

The sophisticated dress featured a boat neck, capped sleeves, pleated details at the torso and a cowl back. The head-turner was created by the UK-based brand Ghost London.

Olga Kurylenko in Quantum Of Solace (2008)

Prada had its James Bond moment in the Daniel Craig-starrer Quantum of Solace with actress Olga Kurylenko who portrayed the role of Camille. Kurylenko is seen wearing a black crepe cocktail Prada dress for most of her part in the film.

The sweetheart neckline dress also featured a pleated front ruched to the left, broad shoulder straps and a bow at the back. The monotone look was completed by pairing it with black heels.

Quantum Of Solace’s costume designer Louise Frogley, while talking about the outfits worn in the film, said in an interview, “I realised we were designing the costume to fit the stunts and it seemed to me we were putting the cart before the horse. People took it for granted that it had to be a certain way but when we actually looked at it carefully we questioned why we were designing a trouser suit with arms for a glamorous party set in a hot country – it didn’t make sense. So in the end, Camille goes to the party in a fantastic black Prada dress, NOT a trouser suit!”

It seems like Bond movies and statement-making swimwear go hand-in-hand and Claudine Auger’s black mesh number in Thunderball was no different. Auger played the damsel in distress role of Domino in the 007 film. For the scene, the French actress donned a one-piece black bikini. The one-shoulder attire fitted Auger like a glove and added a little oomph with the mesh details at the front.

The film was shot in Miami, US, and included several beachwear inspirations for men and women that are still as glamorous as they were in the 60s. The costume designer for the film was BAFTA winner Anthony Mendleson.

The list of the most iconic Bond girl outfits cannot be complete without Eva Green in the black dress in Casino Royale opposite Daniel Craig.

Vesper Lynd, played by Green, not only becomes the first Bond girl to make 007 fall in love but also inspires her fans with the character’s impeccable sense of style, thanks to the costume designer Lindy Hemming.

There are not one but two looks that became memorable. The first one was the classic black long dress by Versace. The floor-sweeping number had a low neckline with wide straps criss-crossed at the back. She teamed the attire with a long statement necklace and a matching pair of earrings.

This dress takes us back to where we started — Dr. No.

The first time Connery introduced himself to Eunice Gayson (Sylvia Trench) as “Bond, James Bond” is remembered by many fans. The line was so iconic that it became integral to the franchise.

However, the one-shoulder red dress worn by Trench also became the talk of the town. There is an interesting story behind the dress, too, which the actress shared in an interview with BBC.

The stunner said that she was “horror-struck” when she originally saw the dress that she was supposed to wear during a casino scene. The brown and gold dress was so similar to the colours used to create the set that Gayson “disappeared into it.”

Terence Young, who was the director of the film, told Gayson and the wardrobe mistress to visit a shop closeby that sold dresses. Upon reaching, they found that it had turned into one that sold wool. She said, “As we were coming out to go back to the studio to give them the bad news, we saw a red dress hanging at the back of the shop. It was a size 20, and I was a size eight. The wardrobe mistress said, ‘Never mind, the colour’s good against the brown — we’ll take it.”

The wardrobe mistress had to cut out a portion of the dress and clasp it with cloth pegs. And this became the dress Gayson wore for the scene.