London Fashion Week 2022: Imminent Designers to Keep an Eye on 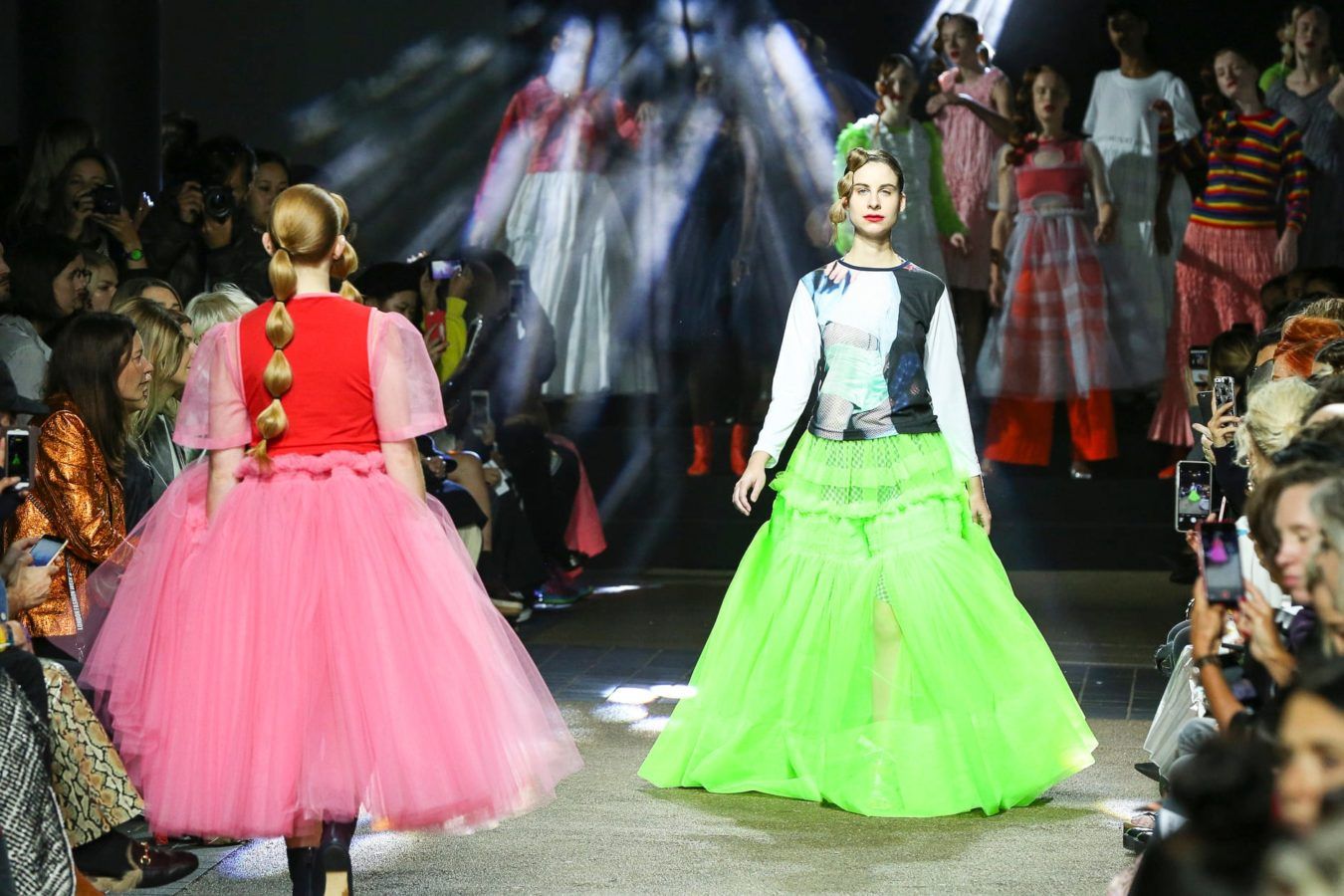 Following the New York Fashion Week, London Fashion Week is here and has shone spotlights on several looming designers. Let’s get to know them through some of their significant designs.

After nearly two years of conducting fashion shows virtually because of the COVID-19 pandemic, the London Fashion Week (LFW) is all set to blow the audiences away with physical and digital shows in February 2022, similar to the LFW Spring/Summer 2022 that took place late last year. As per the British Fashion Council’s (BFC) official schedule, LFW Autumn/Winter 2022 will be held from 18 to 22 February.

The 2022 London Fashion Week is going to adopt a hybrid working model which involves physical and digital shows. The official schedule is going to feature stunning catwalk shows, host talented designers and their teams, along with exhibitions, appointments and events in London and on their Official Digital Hub.

London is known for its eccentric sense of fashion and personal style. The city and its culture seamlessly balance its alternative side with its British aristocratic and polished aesthetic. The fashion scene in London screams disruption and excitement while paying tribute to its prim and proper roots. This year’s LFW hosts a range of unconventional and indie designers like Molly Goddard and Fashion East alumni Simone Rocha and Supriya Lele.

Additionally, since the city houses many of the world’s most prestigious universities for fashion and textile design, scouting young and upcoming designers who challenge the norms and revolutionise fashion has never been easier. The LFW gives emerging designers an opportunity to debut and make it big.

The Central Saint Martins graduate, Molly Goddard is one of the most intriguing  young designers in the UK to look out for.

With fluid designs and relaxed fits that highlight the play of fabric and volumes, her designs showcase avant-garde detailing. Goddard cleverly uses lightweight and colourful fabrics such as taffeta, tulle, silk and organdy, alongside techniques like hand-smocking, shirring and layering in her stitching and design, ensuring she has earned a niche for herself.

Blending inventive, experimental yet modern and stylish concepts in her previous LFW collection, Goddard presented dainty and ruffled dresses in lively and youthful colours. Her show was reminiscent of her vibrant and playful childhood and lent an air of nostalgia.

You will be able to catch Goddard ruling the runway on 19 February 2022.

Christoph Ritter is a London-born, Royal Academy of Fine Arts, Polimoda and Central Saint Martins graduate with a eco-futurist, sustainable and ethical fashion design label under his belt. His collection, inspired by London’s massive nightclub and underground party subculture, breaks all barriers and makes a statement.

Ritter’s debut collection consists of vibrant and experimental pieces that will enable its wearers to seamlessly switch between a posh, high society club and a raging midnight rave.

Ritter’s style aims to be creative with the help of innovation and technology. The vegan and climate change advocate uses fabrics and materials made from recycled waste such as plastic bottles, cotton and ocean plastic.

This young designer with a mission is all set to become a star at the LFW AW22, given Ritter’s extensive experience working for high-fashion design studios and haute couture labels in the past. Ritter’s progressive yet rooted design approach makes Christoph Ritter Studio one of the most exciting emerging brands to look out for.

You can watch his magic on 18 February at the 2022 London Fashion Week.

The highly acclaimed eponymous fashion brand is quickly becoming one of the most sought-after London-based labels. Inspired by Lele’s multicultural background stemming from her Indian ethnicity and British roots, her fashion brand tells us a personal story through art.

Lele earned her master’s degree in Fashion (Womenswear) from the Royal College of Art in 2016. She subsequently added another feather to her cap when she debuted her graduate collection, backed by Fashion East, at the London Fashion Week in 2017, along with a chance to present in the Tate Modern.

After the show, Lele catapulted to fame in the world of fashion and showcased her collections through Fashion East for three more seasons, before bagging a standalone show in 2019 for the SS20 season.

In 2020, Lele won a portion of the coveted LVMH Prize fund, which was divided among the eight finalists for the first time. Celebrities, including Ariana Grande, Rihanna and Olivia Rodrigo, have been spotted flaunting Lele’s designs.

Watch Supriya Lele take to the runway at NEWGEN Catwalk Space on 21 February.

While turning heads on Netflix’s Next in Fashion, London-based Daniel w. Fletcher boasts designs that blur the lines between masculinity and femininity, without compromising style and elegance. He launched his brand in 2015.

Fletcher’s eponymous brand focusing on casual luxury has now become a big deal in the world of fashion, and his designs are often sported by celebrities such as Dua Lipa, Harry Styles and Josh O’Connor. The designer has worked at luxury labels such as Louis Vuitton, Victoria Beckham, Burberry and Lanvin, before starting on his own.

The Central Saint Martins graduate has won multiple accolades and awards over the years, the latest being ‘Breakthrough Designer of The Year’ by British GQ. The brand is synonymous with contemporary chic and stays true to the cultural climate of Britain.

Daniel w. Fletcher will be featured on the 2022 London Fashion Week runway on 19 February.

Exploring sensual, delicate and feminine energy through her designs, the Central Saint Martins alum, Yuhan Wang, is one of the most anticipated young designers presenting at the 2022 LFW. Her London-based brand was first launched in 2018.

The Chinese designer pays tribute to the vintage and conventionally feminine style of clothing through her designs. Woven together like fine art, her collection is a dream come true if you’re looking for a hyper-feminine ‘cottage core’ Victorian vibe.

Wang explores and deconstructs influences from Chinese ideas of femininity and binds them together with the western culture through her nostalgic and romantic design approach. Her designs are lauded by a global audience for their delicate silhouettes, fluid and pastel fabrics, along with a nuanced and sensitive cultural representation.

The designer did her first solo show at the LFW’s Autumn/Winter 2020 season and was one of the finalists for the prestigious 2020 LVMH prize. Look out for Wang’s collection on the NEWGEN Catwalk Space on 20 February. It will also be shown on the digital runway on 22 February.

Another set of emerging designers to keep an eye out for is RIXO founders, Henrietta Rix and Orlagh McCloskey. The label’s conception can be credited to the designers’ devotion to vintage style clothing, exuding nostalgia and timeless beauty.

The designers do not pay heed to ever-changing trends or styles dictated by cyclical fashion seasons. Instead, they focus on creating ageless and timeless clothing that can be worn everyday and also be passed through generations as heirlooms.

More than ever, the design philosophy of ‘slow fashion’ and sustainable cycles of consumerism are being stressed among fashion brands all over the world. RIXO’s approach neatly ties with this philosophy, contributing to the collective mission of brands to exercise frugality when it comes to our planet’s resources.

The brand has numerous prestigious awards to its name, including the British Fashion Council in 2017 and Premium Brand of the Year at Drapers Awards in 2018. As part of their Spring/Summer 2022 collection, RIXO presented their holiday-themed ‘Bon Voyage’ collection at the Barbican Conservatory.

RIXO will be seen on the runway on 18 February at the LFW.

Nensi Dojaka is one of the hottest designers on the block with a grand 2021 LVMH prize worth EUR 300,000 and a year-long mentorship to her name. The Albanian designer earned a master’s degree from Central Saint Martins and has been living in London since she was 17 years old.

She has also created a dedicated and high-profile fanbase which boasts a star-studded list, including Bella Hadid, Sophie Turner, Rita Ora, Adwoa Aboah and Emily Ratajkowski, donning her designs.

Dojaka’s designs are an ode to the classic 90s silhouettes — spaghetti straps, plunging backs and necks and figure-hugging cuts and forms. Her dainty, feminine and tailored pieces, reminiscent of the easily recognisable 90s high-fashion supermodel era, makes her a compelling contender for celebrities and supermodels hunting gorgeous designer red carpet looks or even sensual after-party outfits.

Dojaka experiments with lightweight sheer georgette, hosiery and similar fabrics in her lingerie-inspired pieces. She made her runway debut at the Spring/Summer 2022 season of the LFW, and will now be seen at the AW22 season as well.