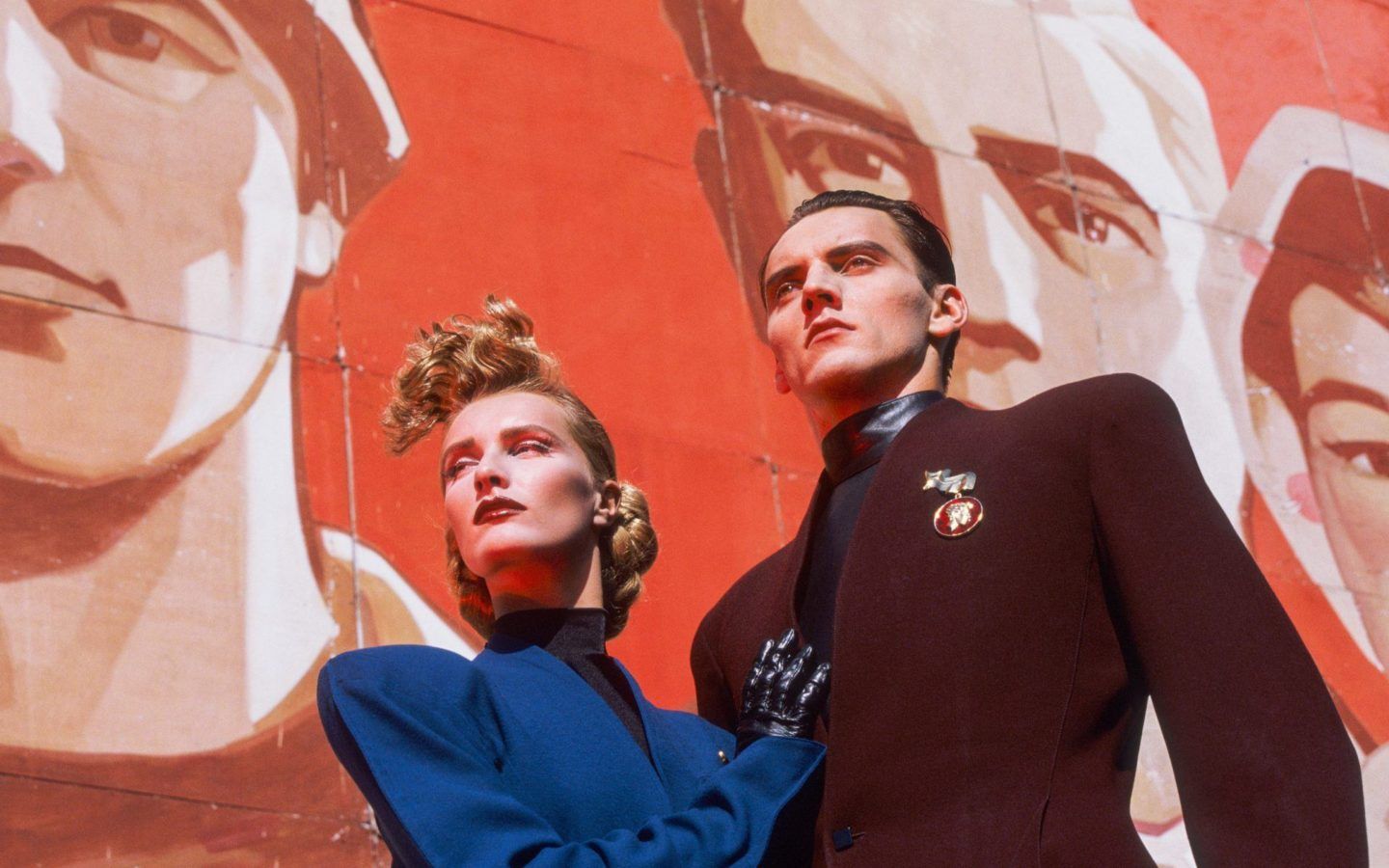 Remembering Manfred Thierry Mugler, who died just over a month ago, we celebrate his era-defining contributions to fashion and art.

Although the word “icon” has been worn out by millennial girlbosses, white gaysTM and TikTok citizens, one person who rightfully deserved the epithet was surely fashion’s original enfant terrible, Manfred Thierry Mugler. His death on January 22nd sent shivers down the spine of every fashionable and fashion-adjacent person globally: the world had lost another visionary – and with it a golden era succumbed to oblivion. Descriptors such as “designer” or “creative” director don’t even begin to encompass Mugler’s contributions not only to fashion but art at large.

Born in Strasbourg in 1948, he was drawn to the arts and at the age of nine began training in classical dance, which subsequently led him to the ballet corps at the Opéra National de Rhin. During his time in there, he enrolled in an interior design course at Strasbourg School of Decorative Arts and, after completing his formal training in the late-1960s, started working as a freelance designer for London boutique Mr. Freedom. Ten years later, the House of Mugler was born.

It’s impossible to separate the man himself from the house of Mugler – not just a fashion brand, but a powerful vehicle for pure artistic expression. The house was born in 1973 from a collection titled Café de Paris – the first public showcase of Mugler’s sharp 1940s-inspired silhouettes, which remained in the designer’s oeuvre until he left the brand in 2002.

During the ’80s and ’90s, Mugler rose to international acclaim with ambitious fashion shows that bore a resemblance closer to theatrical performances than traditional défilé; that much was only natural, given his lifelong fascination with costume and formative years spent in ballet troupes. For his brand’s 10th anniversary, he created a grand-scale production titled L’Hiver des Anges, which brought together fashion, music and theatre. Among the 250 glamorous spectres at the show was the pregnant black-American model Pat Cleveland, who, dressed as Madonna, majestically descended from the ceiling to mark the celebration’s triumphant finale. To say Mugler wanted to champion diversity and inclusivity would be akin to saying that bees want to have stripes. Celebrating individuality was part of his nature. Alongside the generation’s supermodels, he included in his shows women of colour, trans models, adult film stars and queer artists – it was his vision of pure beauty, free of any claims for diversity points.

The year 1992 was a pivotal point for him and – at the same time – a defining chapter in the fashion history of the ’90s. Following the spring/summer 1992 ready-to-wear show, Mugler worked with George Michael to produce the “Too Funky” music video. A book of behind-the-scenes anecdotes about the three-day-long filming could rival in its thickness that for Dalí’s Surrealist Ball of 1941, or fabled stacks of Polaroids taken in Met Gala bathrooms. Julie Newmar, Mugler’s long-time muse and the originator of the role of Catwoman in the 1960s Batman, once described the filming as “hysteria, lots of smoking and raw nerves”.

Indeed, “Too Funky” was a testament to Mugler’s audacious showmanship and artistic ambitions – and all for the good cause of promoting Aids awareness. As one of the video’s stars, drag artist Joey Arias, told Vogue, “Mugler’s characters were superhuman. No one’s just mediocre, it’s all about superhumans: the thinnest and the tallest and the most extreme and the most beautiful.” The video featured model and actress Emma Sjöberg strutting down a runway in a Harley-Davidson bustier and Linda Evangelista, her headdress dripping with ostrich plumes, surrounded by fawning paparazzi. Newmar, then aged 60, stunted in a PVC bodysuit and Sjöberg – again – posed in a full chromed metal gear that was cast on her body during 14 painstaking fittings. The video, which could be described as “the newcomer’s guide to the Mugler universe”, was also according to Arias “the height of fashion”.

In the same year, Mugler also revolutionised the fragrance world with Angel, the first known example of a gourmand scent. The olfactory masterpiece has a rich pyramid of sweet notes: cotton candy, melon and coconut on the top, honey, blackberry and rose in the middle, and caramel, chocolate and vanilla at the bottom. The perfume was inducted into the FiFi Hall of Fame in 2007. Mugler himself directed the campaign, choosing Jerry Hall as the face of the first generation of the fragrance. A 1998 relaunch of the scent starring model Amy Wesson inspired several few artists and pop-cultural figures, including Hirohiko Araki’s creation of artworks for his manga Vento Aureo in 1999.

In all their extravagance, “Too Funky” and Angel merely scratch the surface of Mugler’s genius. His tour de force as a fashion designer and a showman came with his 1995 haute couture show, when he showcased his 20th-anniversary collection in an ambitious event at Cirque d’Hiver, dubbed “The Woodstock of Fashion”. It involved almost 100 looks, including a magnificent golden metal corset worn by Nadja Auermann, which would later be enshrined in popular culture through the interpretations by Alexander McQueen and Dolce & Gabbana. Mugler muses of the time, such as Carmen Dell’Orefice, Veruschka von Lehndorff and Jerry Hall, walked alongside young fashion darlings like Naomi Campbell, Kate Moss and Eva Herzegova, while American socialite Patty Hearst performed striptease – it was only logical. The “scalpel-cut aerodynamic details” once attributed by Vogue to the designer were evident at the show, along with wasp waists, various cyborg get-ups and, of course, the Birth-of-Venus dress.

Another ’90s show deserves – at the very least – an entire chapter in all fashion textbooks. The 1997 Haute Couture collection, titled Les Insects, was a parade of dominatrixes, vampires and high-fashion arachnids that made even the most pedantic couture collector dream of getting their hands on the creatures of Mugler’s devising. The late designer put models in precisely tailored skirt suits with defined wasp waists, turning women into flies, yellowjackets, butterflies and more. The show sparked gasps with its liberal use of latex (on both men and women) and the troupe of couture gimps decorating the runway’s entry points. It showed proudly enhanced literal references, while always upholding the aspirational nature of haute couture. “His fashion conjugates with the superlative,” wrote Nathalie Bondil, chief curator of the Montreal Museum of Fine Arts – and superlative Les Insects were.

It took a certain level of inquisitiveness to calibrate the proportions necessary to reach those of a Mugler silhouette. Take Jerry Hall’s dress, for example. The velvet gown with ostrich-clad butterfly wings at the back took hundreds of hours to perfect and was a testament to Mugler’s enduring desire of “making a creature”. No matter the collection, his motivation had always been to accentuate beauty – be it through ultra-feminine silhouettes or synthetic alien-like shapes.

Manfred Thierry Mugler’s legacy is as rich and remarkable as his fashion shows, clothes, perfumes and photographs. “I’m not looking for difficulties, I’m looking for extreme sophistication and sense of humour and complete accomplishment,” he once told Business of Fashion. The late artist paved the way for some of this generation’s most promising fashion designers, including David Koma, Casey Cadwallader and Nicola Formichetti. His insatiable hunger for life, experiences and beauty will echo through the recitations of his artistic inventions – not only when his glamazon friends like Kim Kardashian and Cardi B walk the red carpets – but also, inevitably, whenever anybody celebrates differences.