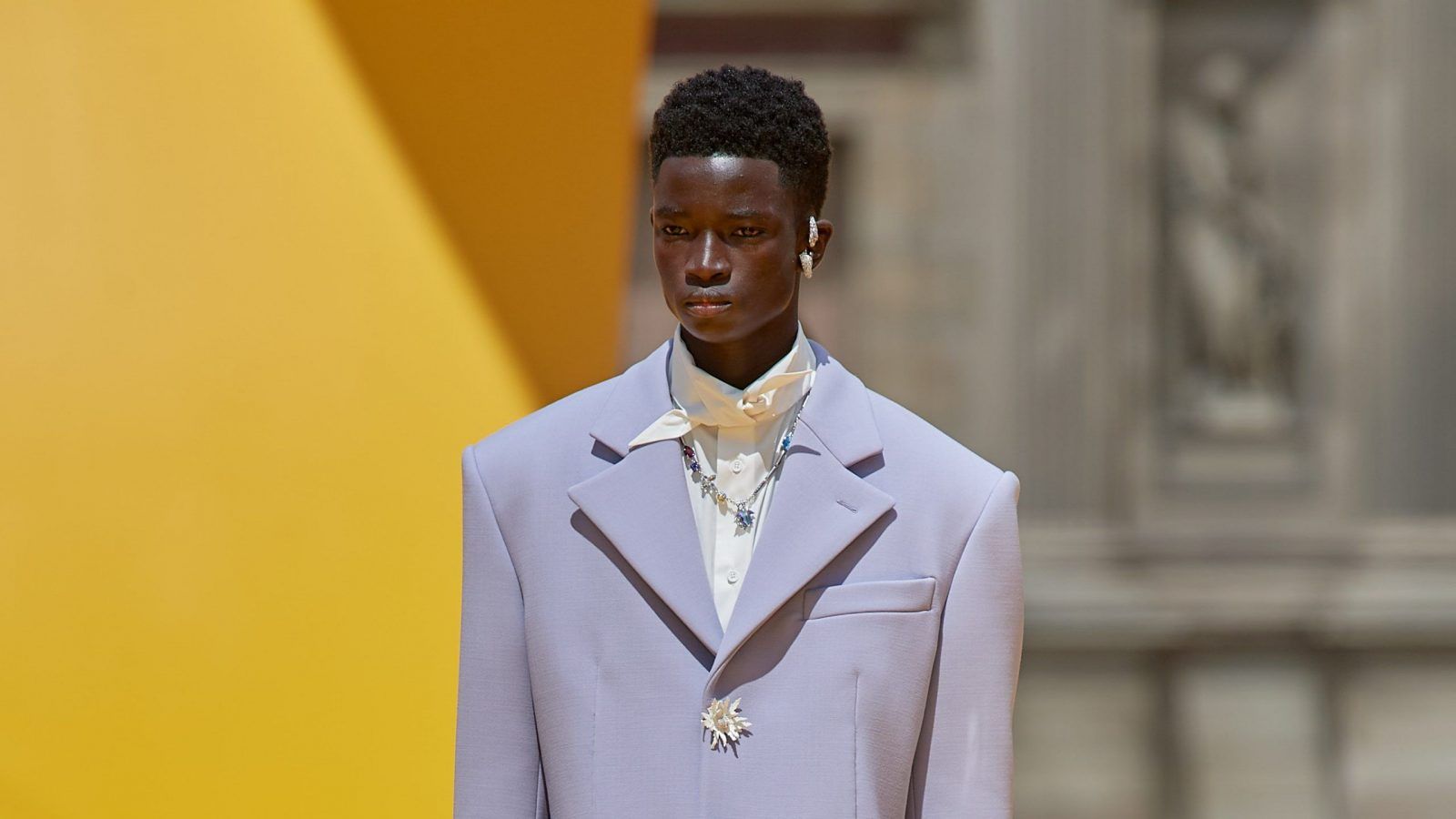 Paris Fashion Week Spring/Summer 2023 Menswear brought in the nerve, the verve and, interestingly enough, weeds. In our latest runway report, we sum up our take on the best highlights.

For Loewe Spring/Summer 2023 menswear, Jonathan Anderson collaborated with Spanish bio-designer Paula Ulargui Escalona to cultivate chia plants, cat’s wort and other greenery on his garments. The result? Grass sneakers and goats, and mossy hoodies and sweatpants. It reportedly took 20 days to ‘grow’ the collection through consistent watering, seeding and, one could assume, ploughing maybe? Apart from the biomorphic hero pieces, the collection featured three sleek leather coats with various daily objects (earphones, lighters, etc) ‘stuck’ in their textures. There were also a couple of colourful bomber jackets, visors with LED screens on them, some performancewear staples and, of course, a brand-new generation of Puzzle bags.

Move over, Julia Fox, there is a new supervillain in town – and it’s whoever Glenn Martens’ muse is. For the Spring/Summer 2023 collection, Y/Project built upon the textural biomorphisms so prominent in its past iterations (including the fabled Jean Paul Gaultier Couture 2022 collection) and spun them into a retro-futuristic, steampunk-esque concoction. The dystopian Liberty Belles in denim and denim-printed organza, gents in scruffs and rugs with an occasional oversized suit over a completely unbuttoned shirt with a detachable collar. Leather had a moment – although a quiet one – as a biker jacket of an asymmetric cut; so did prints – along with the textural screen graphics walked dragons, brought back from the urban skater uniforms of the 90s.

Virgil Abloh’s last collection for Louis Vuitton embodied all the things we love about the late designer. The show was upbeat. Against the backdrop of yellow, a symphony of colour unravelled, crystallising in itself a pure child-like wonder. 18th-century French motifs decorated bomber jackets, cubist prints were spotted on baggy suits and airbrushed green-and-purple fur à la Joker adorned hoodies, sweaters and jackets. Four looks with vivid floral accoutrements executed in the best traditions of Claude Monet closed the show – the last outfit being a dress with a train and a matching blazer.

Pink at the Rick Owens show is the phenomenon I didn’t expect to see – not since the Spring 2021 Ready-to-Wear show anyway. Of course, it wouldn’t be the first time Owens’s production evoked the existential fear and anticipation of the world’s end. This time, though, colour added a new dimension to Owens’s genre of dread, meant to represent “fireballs and flaming suns, arcing across the sky”. Among the cult favourites were the tops with peaked shoulders that resembled either Nosferatu or a caricatured witch – dealer’s choice. Among the novelties was the iridescent oil-spill-esque look, windowpane-check-resembling cubist print and the godson of Parisian sensuality – Ludovic de Saint Sernin – closing the show.

We all are prisoners of Kim Jones’s horticultural hobbies, it appears. Dior’s Spring/Summer 2023 menswear show at Charleston Farmhouse connected Jones’s Britishness with the house’s tender relationship with flowers. And the fashions followed. As expected, the collection bloomed out of tailoring – with Jones’s signature side-buttoned jackets as the mighty stem – and everything else (think technical knits, parkas, Bermuda shorts and fedoras) as fragrant rosebuds. The colour palette was a logical extension of Spring 2022 – without the retina-busting acid green to this author’s sorrow. Tartan was a fresh addition. Appearing upon vests and tiny tennis shorts, they brought the collection even closer to the noble British countryside.

Véronique Nichanian knows best. Not flattery, but rather a statement of fact. For the Hermès Spring/Summer 2023 collection, Nichanian conjured the quintessential summery motifs, like seahorses, crayfish, and imagery of the sun disappearing over the horizon realized in yellow knits. Some waves, tattersall, wheat illustrations, at least one lobster intarsia, but what stood out were splashes of lilac, aquamarine and raspberry – some coating luxurious croc-leather parkas and bucket hats – one could well become the most glamorous fisherman this side of the pond in Hermès leathers. The collection generally followed the canons of Spring 2022, although spicing them up with newfound verve and shaping it with prominent tailoring elements.

Celine’s Spring/Summer 2023 menswear show was titled ‘Dysfunctional Bauhaus’. The name could mean several things really, but, the most straightforward one, perhaps, was Hedi Slimane’s apparent and aggressive, almost, rejection of the conventional frameworks of ‘functionality’. That much could be deciphered from the look number one, where a jacket with fantabulous embellishments and chachkis à la late MJ was styled with insouciant little black shorts. LBS if you will. Shimmer was mot du jour in the Dysfunctional Bauhaus universe – with the golden tinsel coat paying a not-so-subtle homage to the Autumn 2022 collection.

It appears that Marine Serre’s Spring/Summer 2023 menswear show was a parade of archetypes previously known to slip through the cracks of the French visionary’s laser-focused aesthetic narrative. One thing transpired – Serre defies predictability, whether intentional or not. The show opened with swimwear, flowing slowly into the staples of her signature upcycled denim with little crescent prints, then an explosion of hot-pink jackets and dresses made from discarded towels – this is a point where you, dear reader start jumping and rolling on the ground in disbelief – for Serre it was but another PFW show. The defile concluded with a few classic crescent bodysuits styled with lavish baroque slip dresses à la Fendace.

I’ve been an Egonlab. loyalist since their Horror Story short film that was released early last year. This time around, during the aftermath of their Spring/Summer 2023 menswear show, the independent brand finally received the buzz it so deserved. Florentin Glemarec and Kevin Nompeix debuted thigh-high boots in matte and patent leather, styled with denim shorts, some of them cut in a way similar to women’s swimsuits (hello, GmbH) and continued their delicious tradition of mixing emerald green with hot pink – this time, in a form of a flowy suit over a semi-sheer ruched turtleneck.

I once heard a friend say, “what if Thom Browne for Gen Z what Jean Paul Gaultier was for Gen X?” Philosophizings aside, one could hardly ignore the ingenuity and nerve of Browne’s Spring/Summer 2023 menswear. The collection was, as we are told, a bit of a love letter to, well, jock straps – the final look with the denim-coloured tweed number that horned up made that much clear (yes, technically that one is part of chaps, rather than underwear). There were skirts galore as usual, both floor-length and mini. The models’ faces were decorated with anchors, presumably drawing inspiration from Björk or, rather, her makeup artist Hungry.