Luxury Jewelleries to Buy Based on Your Birthstones

Jewelleries are said to complement the whole appearance of the wearer, to highlight what is already there. In fact, they are believed to bring out more than just what’s on the outside, but also the inside.

With a lustre that gleams with the light of a thousand stars and their significance lauded since aeons, birthstones or precious gemstones are some of the most mystical and gorgeous elements in the world.

From glistening rubies and sapphires to emeralds and diamonds, several precious gems have been discovered across the world and many more are probably yet to be. These gemstones are often associated with the wearers’ birth months and zodiac signs and are, hence, labelled as birthstones. People are asked to wear them in a particular metal to reap the benefits of these stones.

Additionally, owing to their regal aura and extravagant charm, wearing or possessing birthstone jewellery is a highly coveted style that has been in vogue since the times of Egyptian pharaohs.

So, whether you wear them to harness their energies and benefits or because they lend a classy look to your ensemble, birthstone jewels deserve all the space in your jewellery troves.

Moreover, if you would love to own such distinctively fine pieces or gift them to your loved ones, our list of some of the most spectacular birthstones is all you need. But before getting to that, how do you know which of the birthstones is suitable for you?

How to choose your birthstone?

As the name suggests, birthstones are commonly associated with the months you are born in. They are also based on zodiac signs and are classified into modern and traditional birthstones. Thus, you can choose yours from either type.

Furthermore, a list of traditional birthstones initially originated between the 16th and 18th centuries. In 1912, the Jewelers of America updated that list and released another one with modern birthstones. This list is revised periodically. For this edit, we have mentioned the stones according to birth months.

With its name originating from the mediaeval Latin word granatus, which means ‘pomegranate’ owing to its red colour, garnet is a dazzling gemstone that looks so exotic. It dates back to the ancient times when garnets were worn in elaborate necklaces. The birthstone is also known to have plenty of healing properties like balancing root chakras, regulating blood circulation, flushing out toxins from the body and recharging your sexual energies.

A January birthstone, garnet’s colour palette also spans hues like deep violet, green, yellow and orange beside the most commonly found red. And when it comes to jewels, it looks especially stunning in rings, necklaces and earrings. 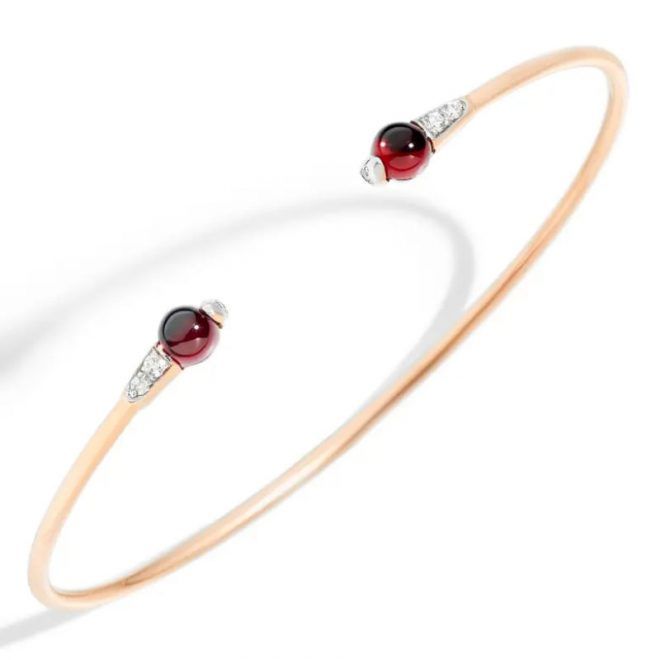 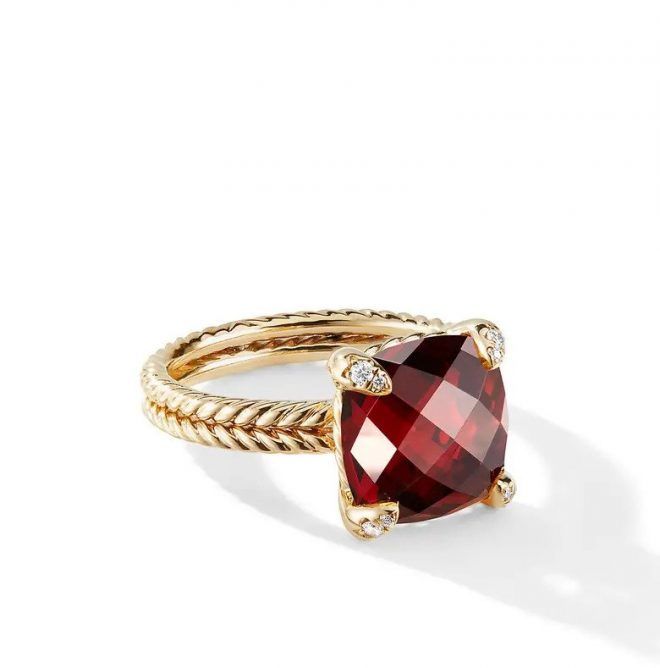 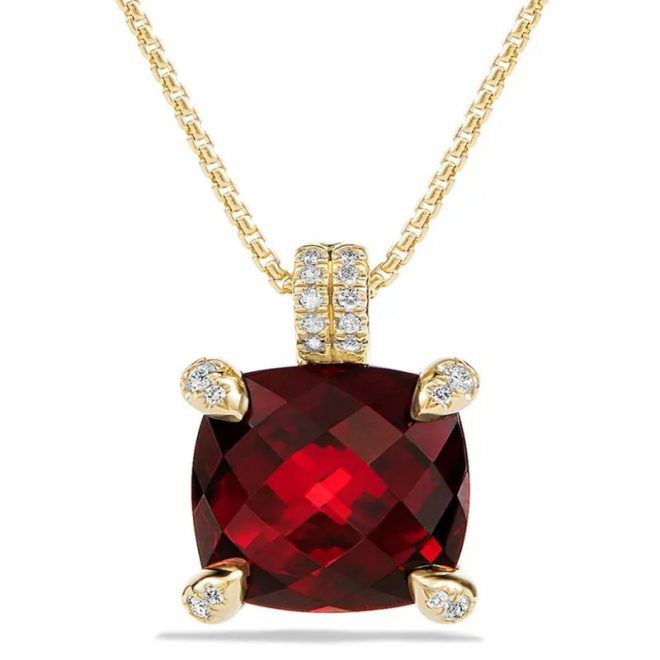 Amethyst is derived from the Greek word amethystos, which means ‘not drunk.’ Ancient Greeks believed that no matter how much one drank, they would not get intoxicated if they wore an amethyst or had it in their mouth.

Admired for its deep purple hue that also ranges to a pale lilac shade, the February birthstone has been long connected with royalty and was a highly preferred jewel of kings and queens.

While this powerful gemstone is symbolic of personal empowerment, heightened intuition, inner strength and mental clarity, it looks equally stunning when worn as jewellery. Be it a pair of dainty earrings, a diamond and amethyst necklace or a beautiful ring, one can never go wrong with this stone. 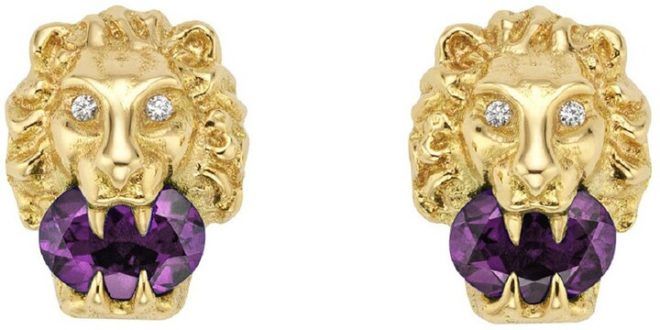 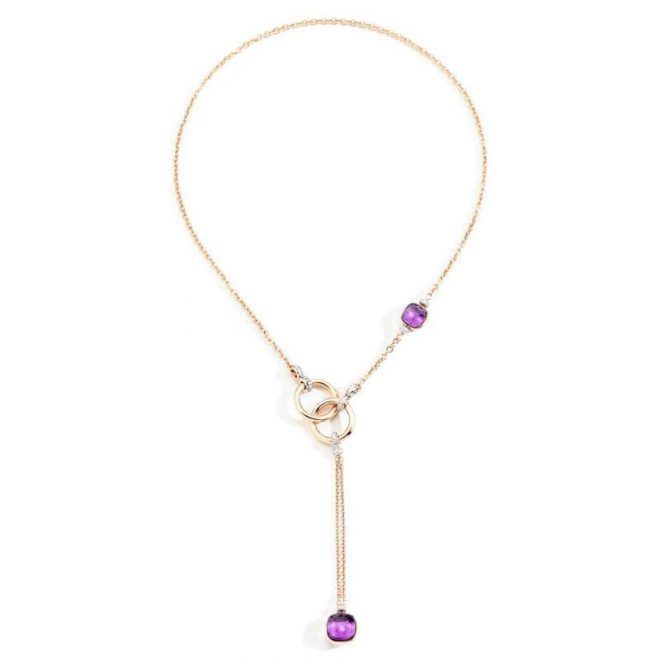 Originating from a Latin term that means ‘seawater’, an aquamarine comes in a colour palette of blue to slight greenish-blue and is a member of the beryl family. Back in ancient times, the mariners carried this stone, believing that it would keep them safe at the sea and would make them unconquerable.

In modern times, the March birthstone is known to protect, enhance intellect and bring marital bliss. Its water-esque calming look and royal aura in fine jewels have always appealed to the likes of royals such as Queen Elizabeth II and Meghan Markle. It makes for a perfect stone for fine jewels like rings, earrings and even tiaras.

Diamonds, they say, are a girl’s best friend. And justly so!

The gem has been a status symbol for ages and is prized for its scintillating beauty, clarity and brilliance. The name comes from the Greek term adamas, which means ‘invincible’, aptly indicating the hardness of diamonds.

Diamonds make up for one of the most coveted possessions to date and look stunning in any design and form. The April birthstone is symbolic of strength, longevity and eternal love. No wonder the universal symbol of marriage and love is often a diamond engagement ring. 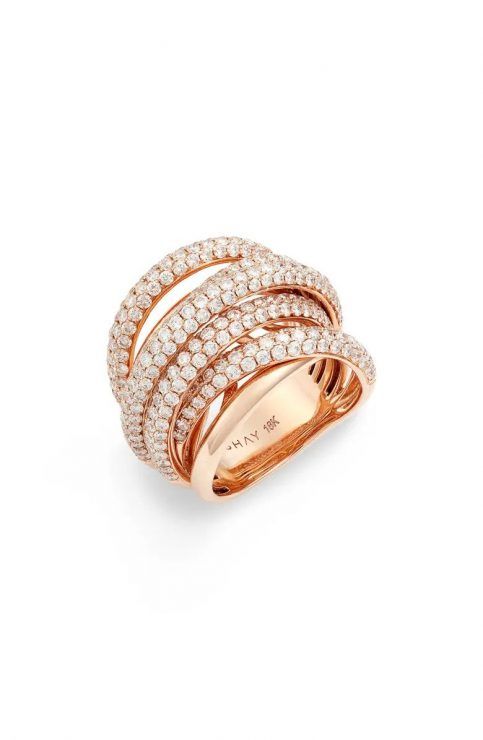 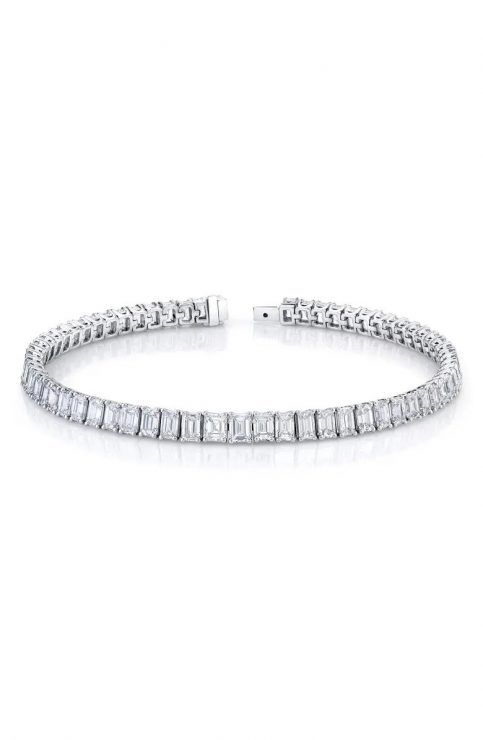 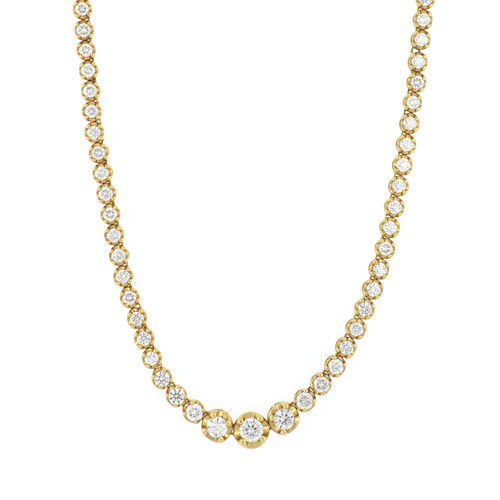 The May birthstone emerald is believed to enhance the intellect of its wearer and promote healing. Its name is rooted in ancient Greek and originates from the term smaragdos, which stands for ‘green gem’. Emeralds have been one of the most desired gemstones since the time of ancient Egyptians.

From enchanting the Egyptian Queen Cleopatra to being the cynosure of the Crown of Andes, emeralds have been revered by the highest royalties and continue to captivate many to date. The stunning green hue of an emerald always looks rich and remarkable no matter what type of metal it is encrusted in.

You’re surely a lucky one if you’re born in June. This is because this month has three birthstones, which gives you more than one jewellery option to choose from. They are pearl, moonstone and alexandrite.

Pearls are highly desirable for jewellery and are hailed for their timeless charm. While pearls are believed to be ‘teardrops fallen from heaven’ for the Middle Easterners, their origin according to ancient Chinese lore is credited to the brain of a dragon. Representing purity, honesty, wisdom and simplicity, pearls are available in a lot of shapes, sizes and hues.

Alexandrite is one of the rarest gems in the gem world, owing to its remarkable colour changes when seen in different lighting. From exuding a red to purplish hue in incandescent light to appear green to bluish in daylight, this rare June birthstone was first discovered in Russia and named after Alexander II.

Finally, moonstone, which is admired for adularescence (an optical phenomenon of a milky bluish glow that appears to move as the stone is turned), gives the impression of moonlight floating on water. It is believed to bring luck to its wearer and is associated with fertility and femininity. 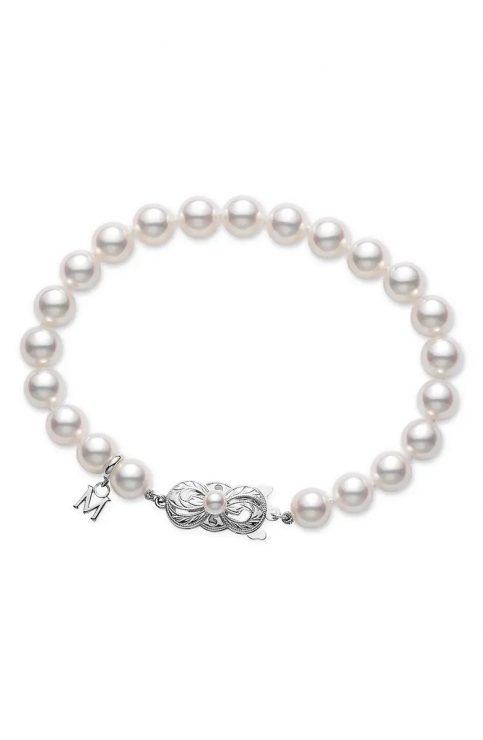 Rubies are the king of gemstones and crown your entire jewellery chest like no other. Its name is derived from the Latin word ruber, which means ‘red’ (the colour of passion and love). Its colour ranges from a deep red, with a hint of purple, to red with pink and orange undertones.

Rubies have been symbolic of different things in different cultures. However, they have always been fancied among the most renowned gemstones everywhere. From being a mark of strength, protection and vitality to imparting wisdom, wealth and calmness to their wearer, rubies have always been considered lucky. And as beneficial as they are believed to be, rubies look equally exquisite and spectacular when worn as adornments. 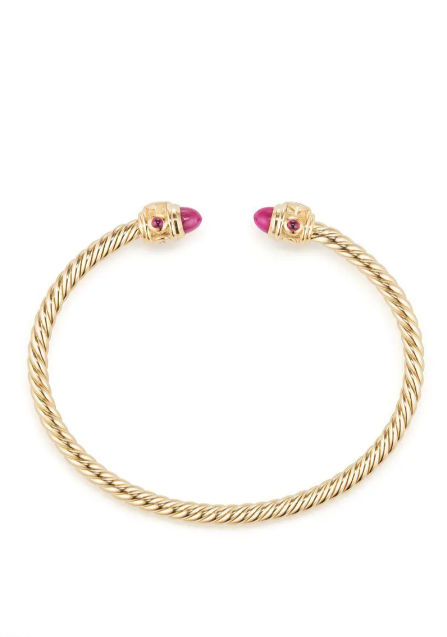 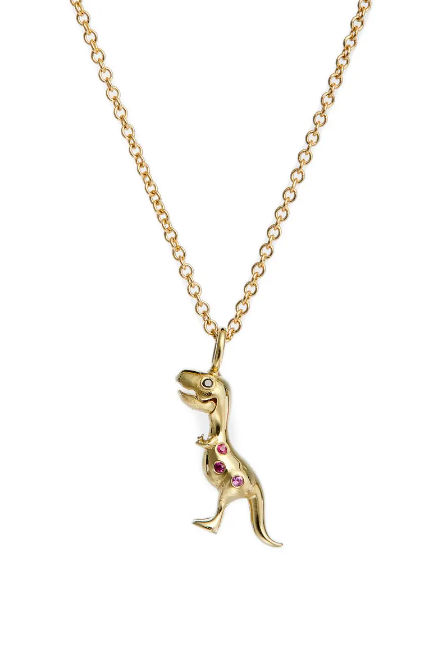 Peridot is the modern August birthstone that is a yellowish, lemony-green gem variety of the mineral olivine. The name of this gemstone is derived from the Arabic word faridat, which means ‘gem’.

It has been a valuable stone since ancient and mediaeval cultures and was used as a protective talisman for centuries, especially to ward off evil spirits at night. The peridot birthstone has emotional and psychological healing properties and directly works on the heart chakra. 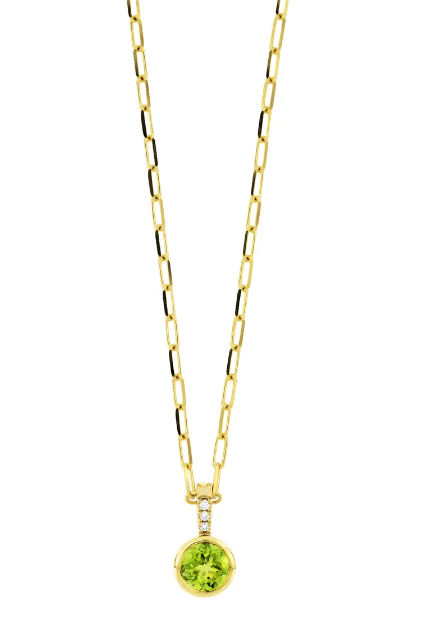 A captivating stone that gets its name from the Greek word sappheiros, the September birthstone Sapphire is a very popular and one of the most-treasured gemstones. While it comes in a lot of colours, the most commonly worn and adored is undoubtedly the gorgeous blue one.

Sapphires have been long associated with royalties (like Kate Middleton who wears a sapphire engagement ring that once belonged to Princess Diana) and the elites since ancient times and continue to charm everyone’s hearts even today. Traditionally, they have been symbolic of sincerity, nobility and fidelity and are believed to hold healing properties and protect their wearer from physical harm. As much mysticism this gemstone is surrounded by, it looks equally extravagant when worn in the form of jewels, especially rings. 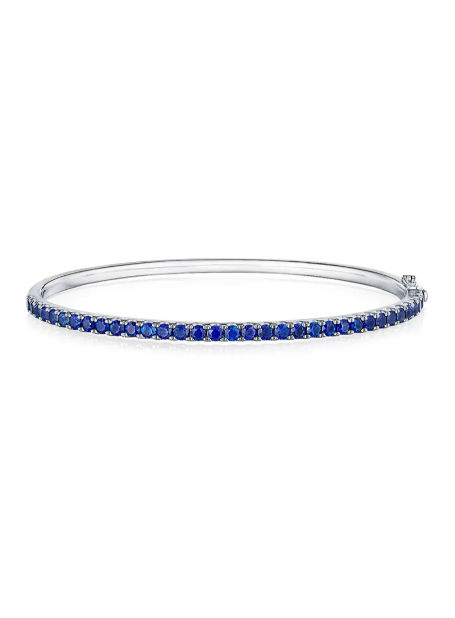 October-borns enjoy the beauty and vastness of two birthstones — opal and tourmaline. Opal originates from the Sanskrit term upala, which translates into ‘a precious stone.’ It went on to become opalus in ancient Rome.

Treasured and adored for their dramatic rainbow-like play of colours, opals are sometimes compared to galaxies, volcanoes and fireworks. They are also associated with light and magic. Thus, they are known to bestow the gift of protection, prophecy, luck and healing to their wearer.

Available in countless varieties and colours, the modern October birthstone tourmaline has its name stemming from the Sinhalese word toramalli, which stands for ‘stone mixed with colours.’ Owing to its multiple colours, it was believed by ancient mystics that the stone inspired artists and their creativity because it had a hue for every mood.

The tones of pink, green and blueish-purple are some of the most sought-after tourmaline shades for jewellery. 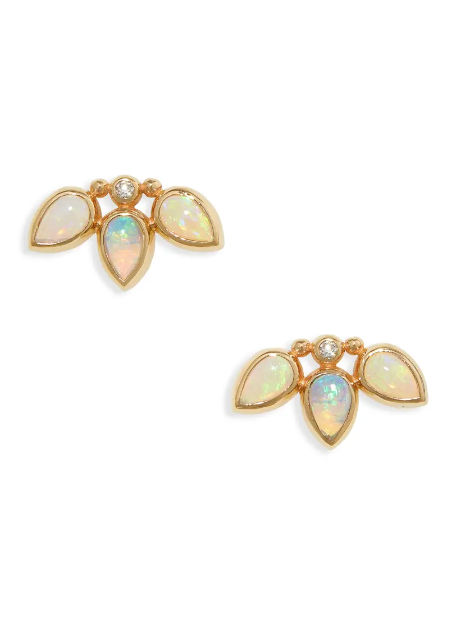 Much like October, November-borns, too, are lucked out with two birthstones to wear and flaunt. Desired for its calming yellow and orange shades, citrine is a beautiful variety of crystalline quartz. Associated with healing and happiness, this gemstone is believed to bring warmth and relaxation to its wearer.

Similar to Citrine is the second November birthstone topaz, which comes in a wide variety of colours like light blue, orange, pink, yellow (the most popular one) and brown. The stone had been favoured by both ancient Greeks and Romans for its ability to provide strength, intelligence and healing to its wearer. 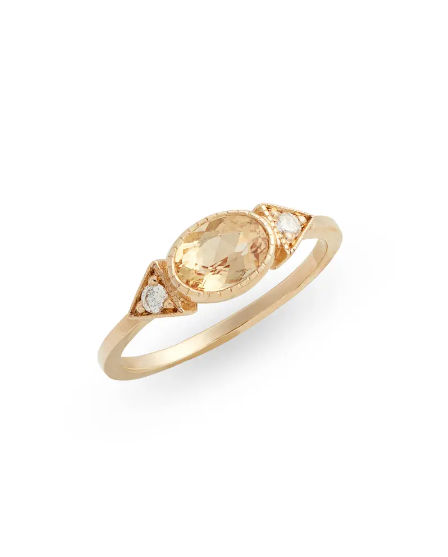 The December birthstone tanzanite was discovered in Tanzania and has a hue ranging from rich blue to deep violet. This gemstone is believed to impart its wearer with spiritual awakening, enhanced intuition and higher consciousness. After its discovery, it was promoted by Tiffany & Co. in 1968 in an advertising campaign.

These birthstones include not only transparent gems but also various opaque varieties. It has been favoured since the time of ancient Egyptians and is liked by fans of the turquoise hue.

Believed to have beneficial powers and bring good fortune and well-being to the one who wears it, this gemstone looks classy in jewellery pieces like rings, brooches, earrings and dainty necklaces. 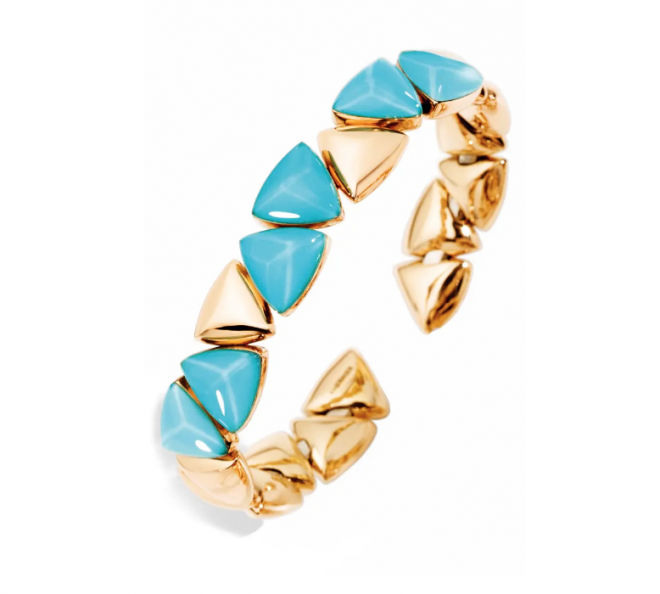 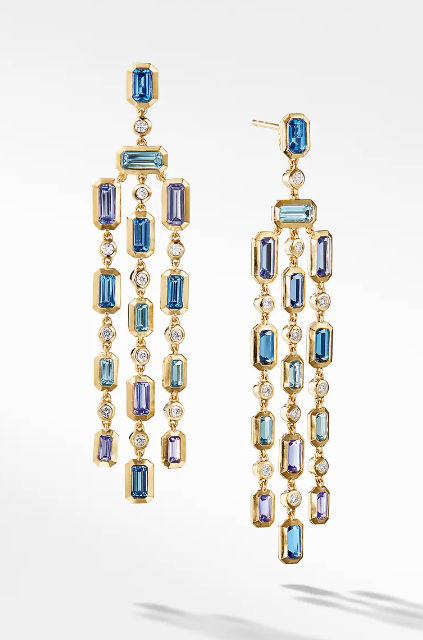 Question: Is wearing a birthstone lucky?

Answer: A birthstone is commonly believed to bring good luck and positively impact your life, because of all the benefits and energies they are believed to have.

Question: What is a birthstone based on?

Answer: Birthstones can be based on either the month one is born in or their zodiac sign. Some people also prefer wearing birthstones as per the days of the week.

Question: What are the rarest birthstones?

Answer: Some of the rarest birthstones include alexandrite, tanzanite and black opals. Their rarity owes to several factors like the regions they are found in, their price and the physical qualities they have; for instance, alexandrite changing colours under different lighting.

Question: Can I have two birthstones?

Answer: Yes, one can have two and even three birthstones. For instance, months like November (citrine, topaz), October (opal, tourmaline) and June (pearl, alexandrite, moonstone) have more than one birthstone.

An old-school at heart with a taste for contemporary finery, Divya believes in making the best of both worlds. She's a happy-go-lucky person who spends her time reading, Zentangling, or binge-watching. Hogging food & dozing off often comes naturally to her. Also, chai!
Lifestyle culture Entertainment Wellness