Birthstones by Month: A Jewellery Guide on the Meanings Behind Each Gemstone 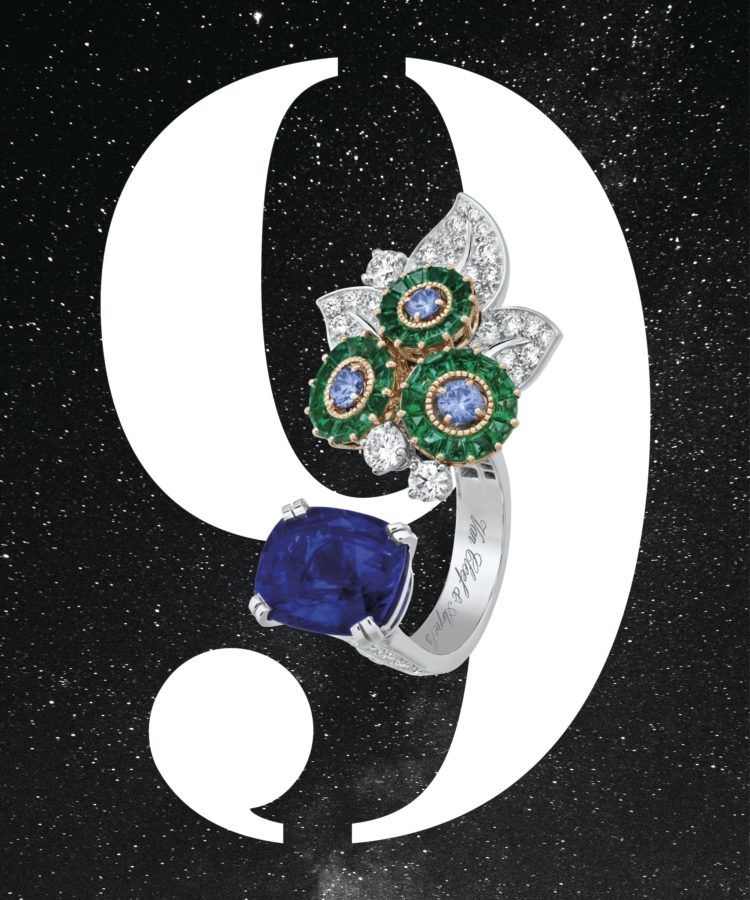 Style
Birthstones by Month: A Jewellery Guide on the Meanings Behind Each Gemstone
Share
Next article

Start the year right by harnessing the special qualities and energies of your birthstone. 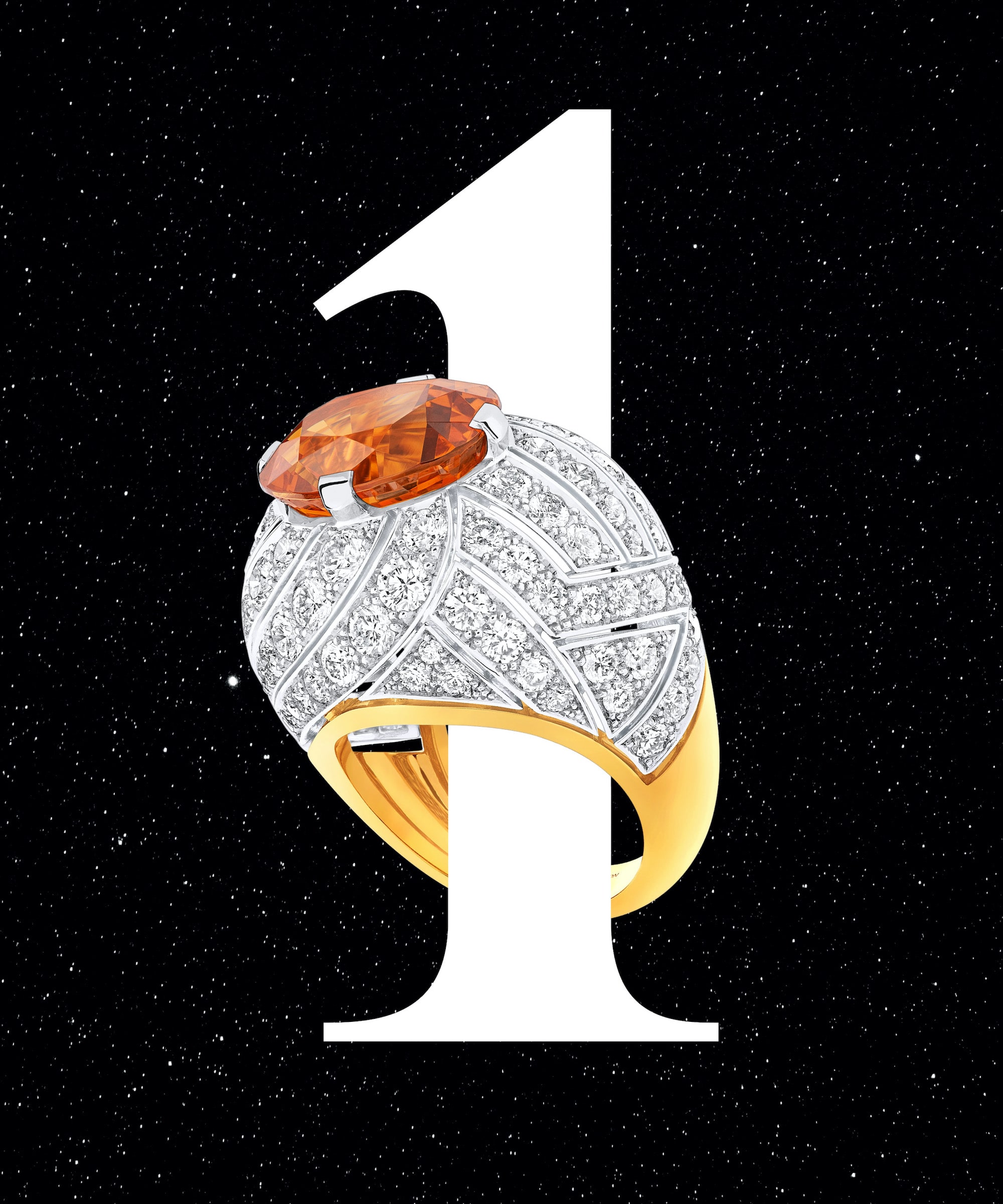 The garnet derives its name from “granatum”, the Latin word for seeds or grains, thanks to its resemblance to crimson pomegranate seeds. While red is the most common colour of the gem, garnets come in a rainbow spectrum of hues. Varieties range from deep red pyrope garnets to vibrant green tsavorites. Mandarin spessartite garnets, however, are the rarest and most expensive. Ancient Egyptians regarded this durable gemstone, which rates 6.5 to 7.5 on the Mohs scale of mineral hardness, as a symbol of life, while warriors across cultures in antiquity wore it for protection. Representing confidence, energy and willpower in modern times, garnets are also said to bring calm and strength to their wearers in challenging situations. 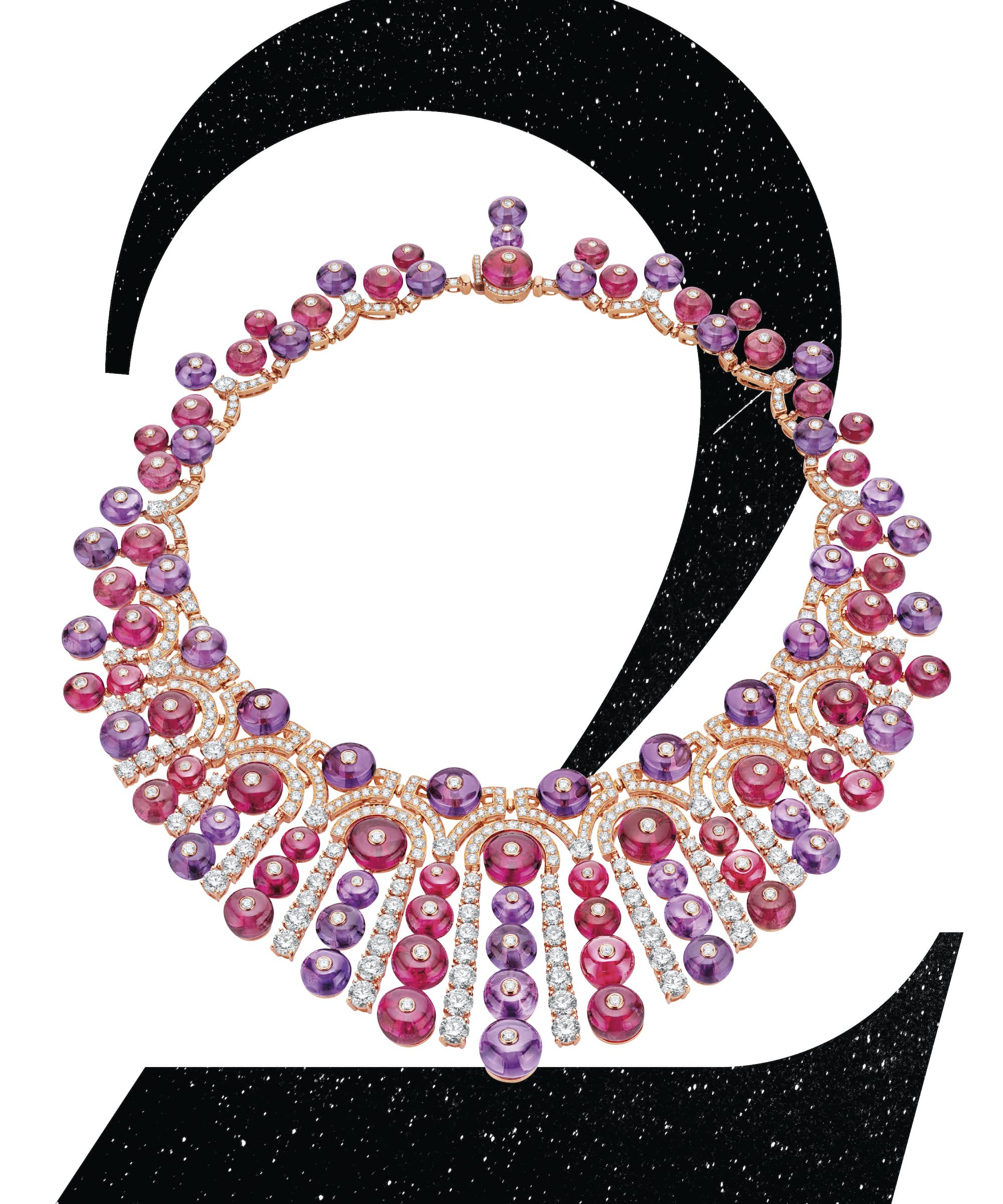 Long associated with myths, legends and spirituality across numerous cultures, this purple quartz is named after the Latin word “amethystus”, which means “not drunken”. Ancient Greeks and Romans believed it could ward off the intoxicating powers of Bacchus, the god of wine and ecstasy, and keep one’s mind sharp. Leonard da Vinci even said the gem heightened intelligence and got rid of evil thoughts. The amethyst was historically held in the same high regard as the diamond by mainly royalty or clergy, until the discovery of abundant deposits made it more accessible. Often occurring in geodes or granitic rock cavities, the alluring stone has a hardness of 7 on the Mohs scale. 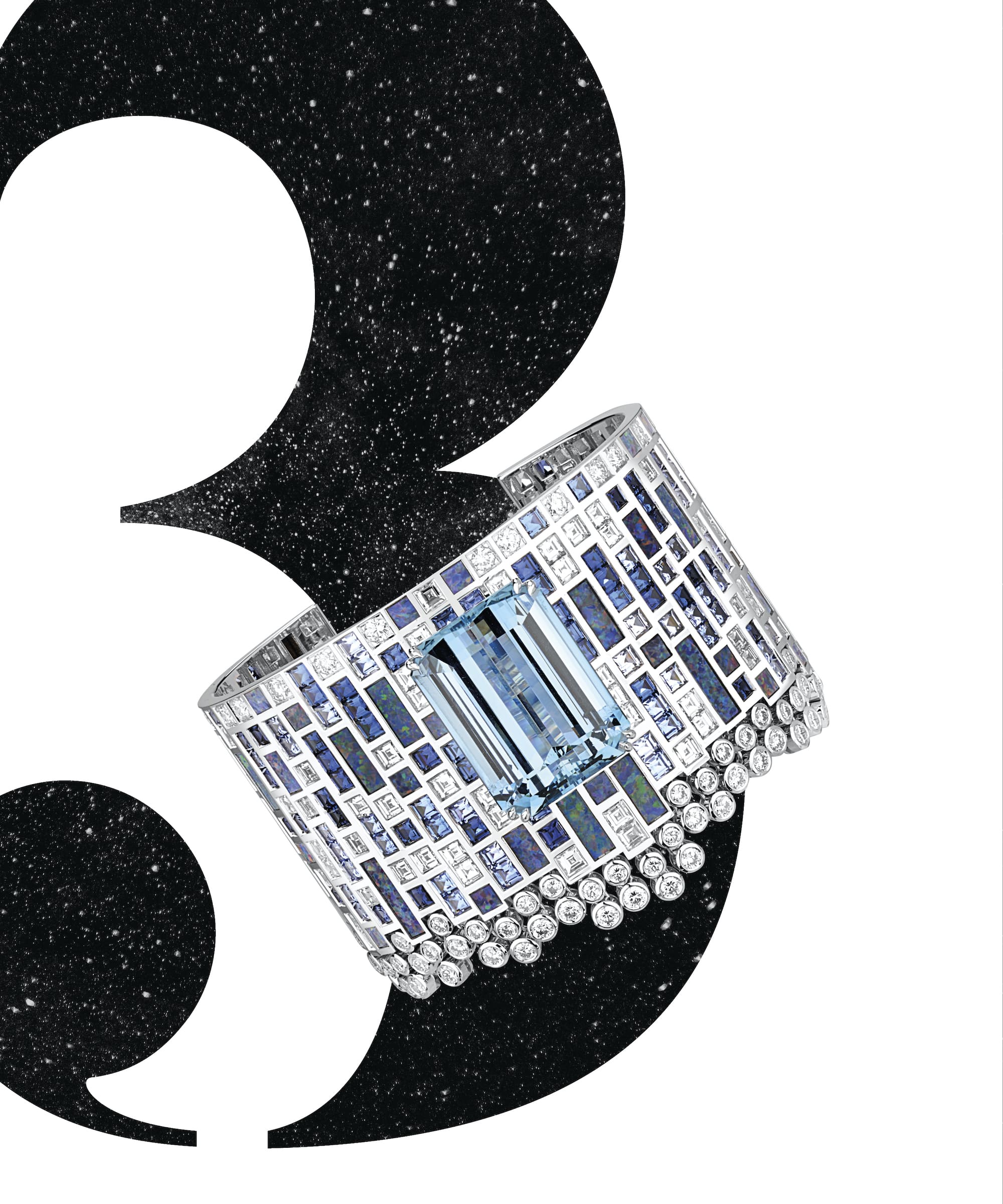 It is little wonder that the aquamarine has been linked to water and the seas throughout history, since it comes in a range of blues, from pale to teal and even more saturated tones. In fact, its name is a literal translation of “water of the sea” in Latin. Roman fishermen used the stone as protection for a safe passage over water and a lucky charm for a bountiful catch. The ethereal gem was also believed to dispel gossip, and impart resilience and mental acuity. Since aquamarine forms in large, six- sided crystals and is highly durable (with a rating of 7.5 to 8 on the Mohs scale), it is the perfect gem to be cut and polished into outsized stones for bold jewellery pieces. The root word for diamond is “adamas”, which means invincible in Greek – very apt for a stone that is a cherished modern symbol of eternity. Admired for centuries for their unparalleled brilliance and hardness, diamonds were believed to be the tears of the gods by ancient Greeks and Romans. The earliest fine diamonds used for jewellery were mined from three major rivers in India during the Mughal Empire. Since then, diamond deposits have been discovered in many other places including Australia, Africa and Russia. Measuring a full 10 on the Mohs scale, the diamond was believed to possess a plethora of powers by ancient civilisations, including the Egyptians, who used it to represent the sun. A variety of beryl, emeralds were mined in Egypt as early as 330 BCE. One of Cleopatra’s favourite gems, the stunning green stone was believed to have helped her boost her attractiveness and inspire loyalty in her subjects. The legendary ruler even claimed ownership of all emerald mines in Egypt during her reign. The emerald was also revered by the Muzo Indians of Colombia (the source of some of the world’s most valuable emeralds), who hid their prized mines so well that it took the Spanish conquistadors nearly 20 years to locate them. Today, the emerald represents loyalty, new beginnings, peace and security. The name “pearl” comes from the Latin word “perna” or “leg”, which refers to the leg-of-mutton shape of an open mollusc shell. The only gems made by living creatures, pearls are very soft (rating between 2.5 and 4.5 on the Mohs scale) and sensitive to extreme heat and acidity. Up until the 19th century, natural pearls had to be harvested by free divers off seabeds as deep as 30m. Their increasing rarity made them very expensive and accessible only to the wealthiest. Pearls only became more affordable in the early 1900s, when the first saltwater variants were commercially cultured in Japan. Boasting an enchanting lustre, they are symbolic of innocence, virtue and purity. In Sanskrit, the ruby is known as “ratnaraj”, which means “king of precious stones”. Symbolic of passion, leadership, courage and prosperity, the stunning red gem has long been associated with royalty throughout history. Rubies adorned the armour of Chinese noblemen as they believed the stones provided protection. Particularly prized in Asian countries, they were traded along China’s North Silk Road as early as 200 BCE. The chromium that imparts the gem its bright red hue also causes fluorescence, which lends it a glow akin to a fire that is lit from within. But chromium also makes this stone rare as it causes cracks and fissures. Few rubies are able to grow large enough to crystallise into top-quality pieces that can fetch much higher prices than diamonds. Tough and durable, they measure 9 on the Mohs scale, making them the next hardest gem after the diamond. 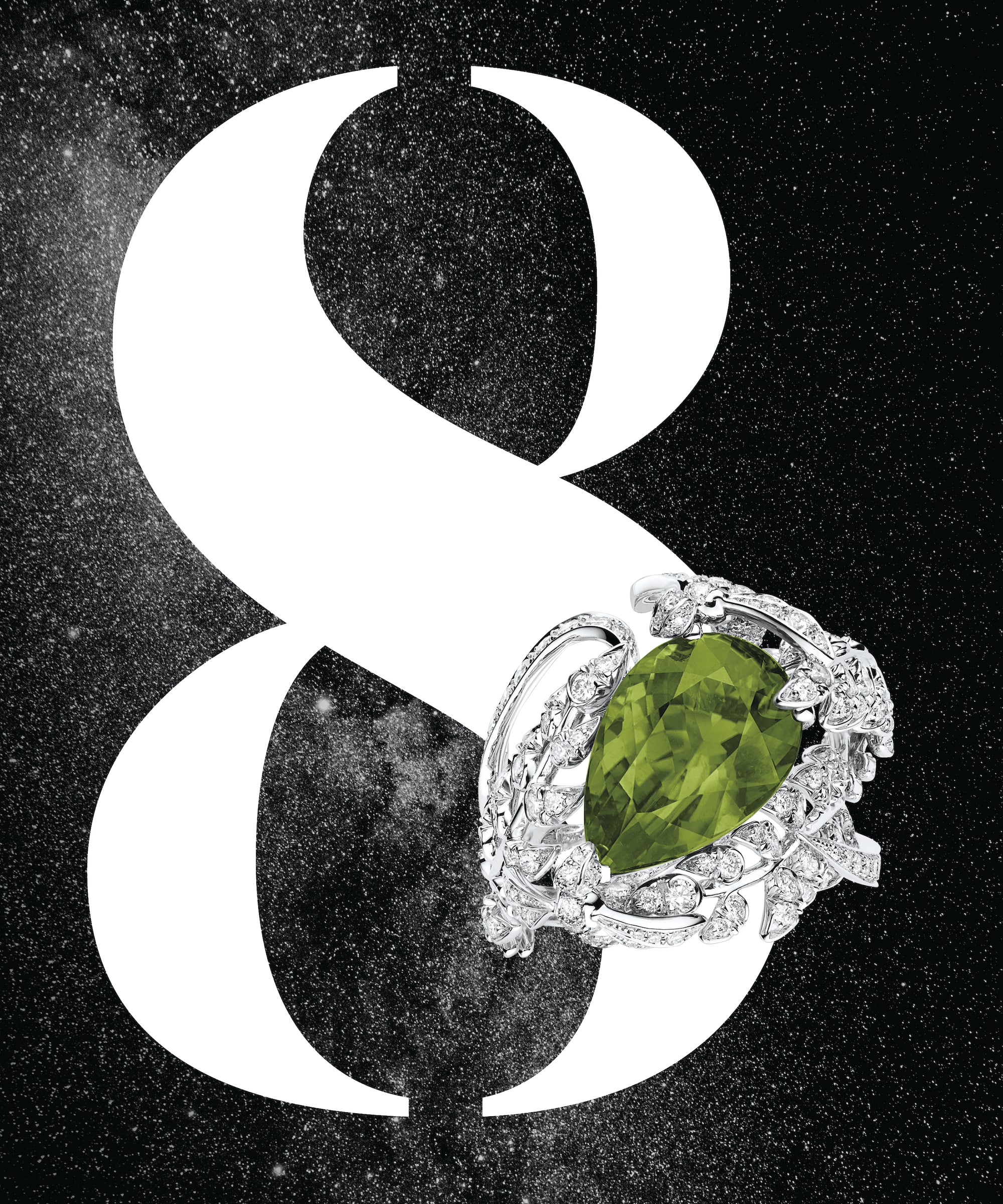 A rare gem-quality variation of the mineral olivine, this striking green stone is formed deep in the Earth’s mantle, only to be brought to the surface by a volcano. Dating as far back as the second millennium BCE, the first peridots in human history were mined by the ancient Egyptians from deposits on a small volcanic island in the Red Sea called Topazios (now named Zabargad or St John’s Island). Also known as chrysolite, the stone has, on very rare occasions, been found in meteorites. Believed to mean “giving plenty” based on its Greek root word “peridona”, peridot symbolises good fortune and prosperity. Rating 6.5 to 7 on the Mohs scale, peridot is especially prone to cracking when it is being cut in its raw crystal form. A prized stone since the Middle Ages, the blue sapphire flaunts a celestial hue that was associated with heaven, divine favour and wise judgement by several cultures. Sapphires were worn by the Greeks when seeking answers from the oracle; Buddhists believed that it brought spiritual enlightenment; and Hindus used the gem during worship. Although sapphires typically refer to the velvety blue variety of the corundum mineral, they come in many other colours including red, which is classified as a ruby instead. Aside from signifying loyalty, nobility, sincerity and integrity, the sapphire is also known as the wisdom stone.

Van Cleef & Arpels Flora Between the Finger Ring in white and rose gold with an 8.17-carat cushion-cut Madagascan sapphire, emeralds, sapphires and diamonds 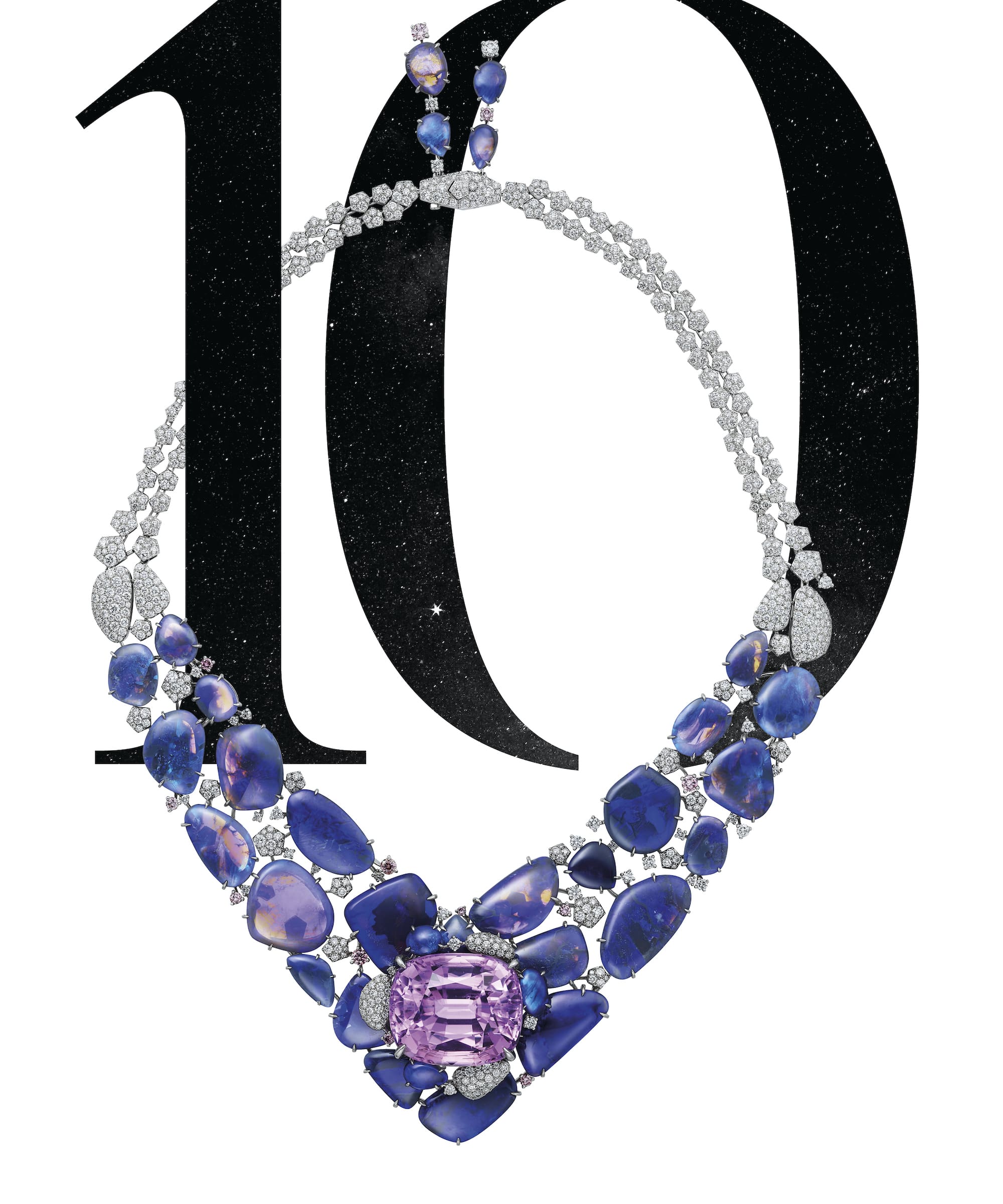 Opal is derived from the Greek word “opallios”, which means “to see a change in colour”. Roman philosopher Pliny the Elder used the word “opalus” when he described how the gem’s rainbow hues seemed to emulate shades of any stone. In the ‘60s, scientists discovered that the opal’s distinctive colour play was caused by microscopic silica spheres that diffract light. This mesmerising visual quality led the opal to become a talisman for strengthening one’s eyesight and developing a higher consciouness. It is also loved by the Chinese as a lucky stone. With a hardness of only 5.5 to 6 on the Mohs scale, the opal is so delicate that it can crack under extreme temperature or direct light. Showcasing colours ranging from pale yellow to honey-orange, this quartz variety takes its name from the citron fruit. Citrine has a hardness of 7 on the Mohs scale, which makes it an attractive option for large, statement jewellery pieces. The gemstone is believed to promote motivation, activate creativity and encourage self-expression. It also enhances concentration, raises self-esteem and revitalises the mind. Reverence for this sky-blue gem predates written history, and it was used as a ceremonial and ornamental stone by the ancient Persians, Egyptians and Native Americans. Its name originates from the French term pierre turque (“Turkish stone”), as it used to be imported to Europe from Persia via Turkey. It is found in arid regions, where rainwater dissolves copper that then combines with aluminium and phosphorus to form colourful nodular deposits in the soil. The hardest turquoise only measures 6 on the Mohs scale, which is why it was often used to carve talismans throughout history. A purification stone, turquoise is said to dispel negative energy and can be worn to protect against external influences.