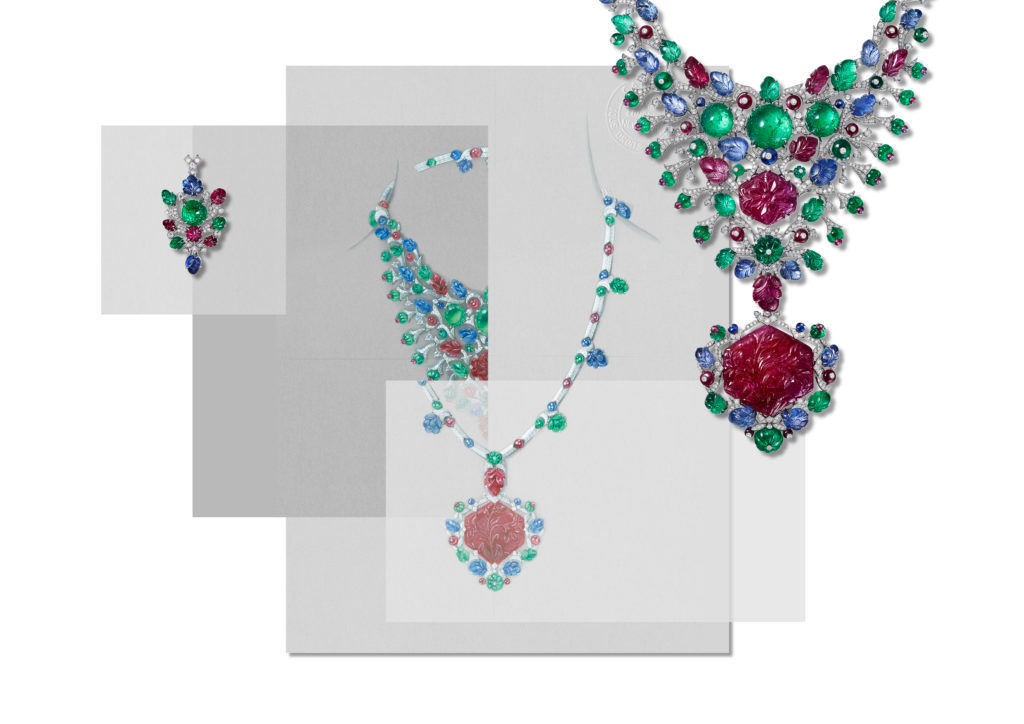 The awe-inspiring Cartier Udyana necklace showcases the emblematic style and colour palette of Tutti Frutti designs from the 1920s.

Jacques Cartier boarded the Polynesia in 1911 and set sail on his first voyage to India. His trip coincided with the Delhi Durbar, a two-week-long spectacle celebrating George V’s coronation as the Emperor of India.

Smitten by the richness of the Indian civilisation, its jewellery culture of vibrant colours and traditional craftsmanship of cabochons set in local designs, the Parisian jeweller quickly sought out established gemstone merchants in Bombay, Calcutta and Delhi.

The Mughals, who ruled northern India until the 18th century, were known to indulge in their love of ornaments and precious stones. They had imperial workshops in Rajasthan, where skilled artisans employed unique techniques in relief cutting and hollowing out emeralds, blue sapphires, and red spinels that were then known as Balas rubies. These precious gems were assembled to form captivating botanical motifs on bracelets, wristwatches and brooches – reminiscent of a glistening garden of exuberant stones, which is a signature aesthetic of the Mughal style.

During the trip, Cartier also cultivated contacts with several maharajahs across the subcontinent, from Kapurthala to Mysore. The fabulously rich men with insatiable appetites for extravagant jewellery were immediately besotted with Cartier’s Parisian designs. Word travelled and soon, the Frenchman became the favoured jeweller among Indian royalty, many of whom flocked to his maison in Paris to reset and design sensational pieces flaunting exceptional gems from their vast treasuries.

The Art Deco period saw Cartier forge a close bond with India. As a result, two types of jewellery designs were born of this relationship. The first was Indian jewels created for the maharajahs in Cartier’s Western style, while the second was India-inspired jewellery made for the maison’s Western clientele.

This novel foliage jewellery broke with the fashion of the day, as noted in the Cartier archives. Reigniting the Europeans’ taste for floral motifs were engraved gems in a riot of hues, which went against the conventions of jewellery design then. This marked the birth of Tutti Frutti – a style which would become one of the major elements in the Art of Cartier.

Enthusiasm for the exotic reinterpretation of flamboyant Indian jewellery grew quickly, capturing a refined clientele with a penchant for fashion and art. Two well-known ardent patrons of the Tutti Frutti style were the wife of the Viceroy of India, Lady Mountbatten (1901-1960), and Daisy Fellowes (1890-1962), the daughter of Duke Decazes and sewing machine heiress, Isabelle Singer.

Coined “savage” jewellery in the early years, it’s interesting to note that it wasn’t until the 1970s when the creative genre, formerly known as Hindu, took on the name of Tutti Frutti. Patented by the house in 1989, Tutti Frutti is such an icon in the Cartier universe that it continues to inspire the maison’s haute joaillerie pieces until today.

In 2016, Cartier created a high jewellery necklace in the Tutti Frutti style named Rajasthan, featuring an engraved 136.97-carat Colombian emerald. A new set with exceptional emeralds followed in 2019: the Maharajah necklace, which pays tribute to the great ceremonial necklaces of Indian princes. Two years later, the Udyana necklace – distinguished by intense colours and an exquisitely engraved central ruby – was unveiled as one of the masterpieces in the Sixième Sens par Cartier High Jewellery collection.

The Udyana, which is Sanskrit for “garden”, is a one-of-a-kind creation that celebrates nature at its most luxuriant and colourful through a profusion of motifs and intricately engraved blue sapphires, rubies and emeralds. Set in platinum, the necklace forms a rich canopy of ribbed emerald beads studded with rubies, and is topped with an astounding 67.7-carat engraved ruby pendant from Mozambique.

In addition to its impressive weight, the stone features a fascinating pinkish red hue with a touch of orange. However, its uniqueness lies in its hexagonal shape that provides an ideal canvas for the carved floral motif. Executed entirely by hand, this engraving is realised with a technique developed by the Mughals in the 17th century.

Harmony of composition as well as the realism of the branches and buds were a priority for the maison’s workshops when creating the necklace. The challenge began with the design and how the engraved stones would be connected. This required an artisan to hand-make a bezel to size to be inserted into each gem. Linked by a tree of diamond-set stems, each gem leaf is different to maintain the naturalness of the piece.

For Cartier, the necklace not only represents a continuation of expertise in craftsmanship, but also its tradition in transformable jewellery. The complexity of this piece, designed to be worn several different ways, is testament to the maison’s savoir faire. While it is imperative that the necklace remains secure when worn in its entirety, artisans must ensure that it can be converted as desired without any visible engineering. There are a total of seven ways to wear the Udyana. The necklace can be worn with or without the central ruby, and with or without the back pendant, which doubles up as a brooch.

As with every piece of Cartier high jewellery, it is the choice of stones that lies at the heart of the creative process for the Cartier Udyana necklace. When it comes to selecting coloured gems, a quest for excellence dictates Cartier’s choices as each one must meet the highest standards of excellence and quality determined by the house’s experts.

Cartier is a founding member of the Responsible Jewellery Council (RJC), an organisation created in 2005 that sets the standard in social and environmental responsibility for the jewellery and watchmaking industry. Included in its scope of certification are gold, diamonds, platinum and silver.

The commitment to continually evolve industry practices is ongoing, and the Coloured Gemstone Working Group (CGWG) was founded in 2015. This initiative brings together the world’s leading luxury brands and mining companies to strengthen research, tools and training for those in the Coloured Gemstone supply chain. As a responsible RJC-certified jeweller, Cartier develops long-term relationships with its suppliers, which are encouraged and supported in their efforts to achieve RJC certification themselves to adhere to the best responsible practices and strengthen trust in the jewellery industry.

All images are courtesy of Cartier