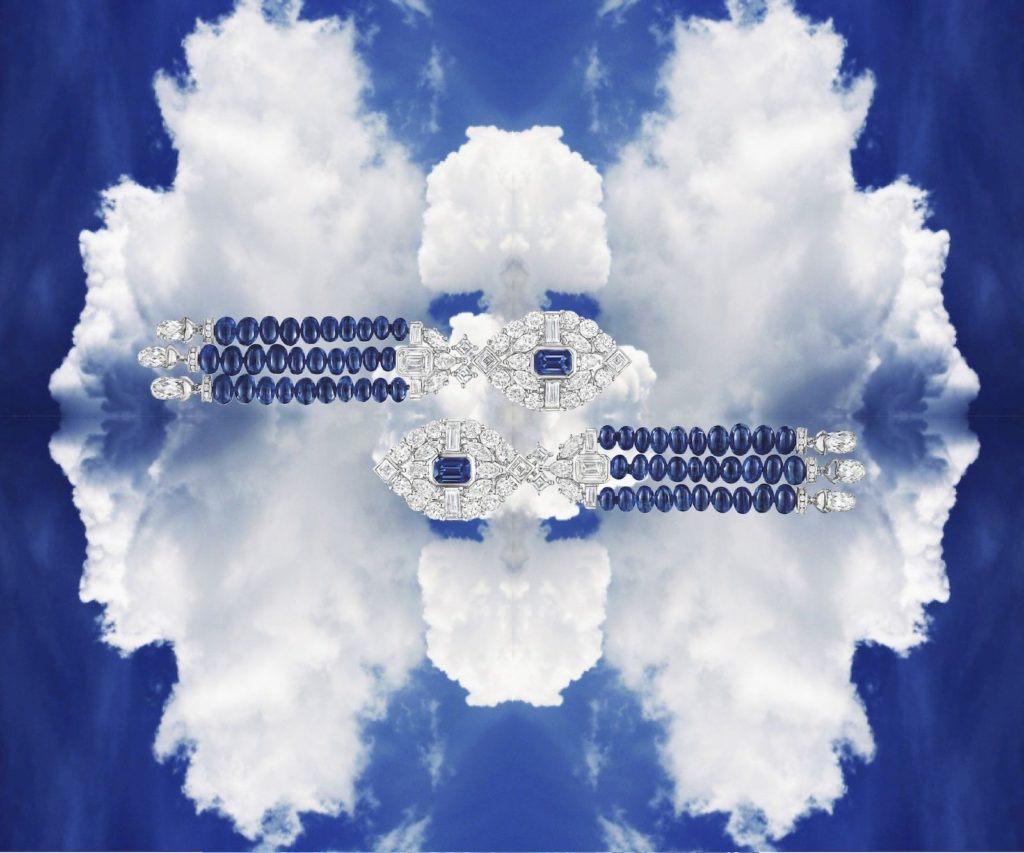 These are 8 most mesmerising blue jewellery pieces

The colour of water, the ocean and sky, blue gemstones have long been a favourite with royalty and revered as symbols of peace, wisdom, truth and power. Here are eight remarkable blue jewellery pieces that showcase the calm-inducing hue.

The spectacular Festa delle Principesse necklace – from Bvlgari’s Festa High Jewellery collection – is a tribute to Cornelia Barberini, one of the most powerful and charming princesses of the 17th-century Roman dynasty. The two facets of the sophisticated woman who was also passionate about the art of reception were revealed in her magnificent palazzo where she used to play with walls that concealed doors, and real and fake mirrors. Reminiscent of an elaborate mirror, the centrepiece of this necklace is a 26.84-carat cushion sapphire from Sri Lanka that is embraced by a graceful quartz rock crystal. It is accented by four round brilliant-cut diamonds weighing 2.28 carats, and 12 round brilliant-cut diamonds and pavé-set diamonds totalling 7.97 carats. Further embellishing the platinum necklace are 23 lustrous Akoya pearls, 13 emerald beads weighing 30.97 carats, and 155 sapphire beads totalling 218.35 carats.

Cartier’s iconic panther first leapt into the world of the maison’s jewellery universe in 1914. Louis Cartier was a pioneer in taming the legendary cat, while his associate Jeanne Toussaint went on to express its beauty in various iterations. The creature has since inspired a series of multi-faceted collections, where it appears playful, haughty, regal and even threatening. A perfect specimen is this Panthère de Cartier ring, set in white gold with an exquisite blue sapphire as the centrepiece, onyx for the cat’s distinctive pattern, emeralds for eyes and diamonds to evoke its shiny coat.

Inspired by sentimental jewellery symbolically known as “toi et moi” or “you and me”, Victoire de Castallane revisits the notion of the emblematic duos with a new high jewellery collection named Dior et Moi. Bringing together unexpected materials such as coloured lacquer, exceptional stones and semi-precious gems, the line asserts the maison’s abstract and artistic essence as well as its technical virtuosity. These asymmetrical Dior et Moi Tribales earrings set in white gold reveal their playful, contemporary character for the woman who loves the unconventional. One side features a unique combination of a 1.45-carat pear cabochon-cut lapis lazuli and a 0.63-carat round cultured pearl, while the other flaunts a cushion-cut opal of 0.45 carats and a 0.57-carat round-cut sapphire, along with blue lacquer. Additionally, there are a total of 13 round-cut sapphires of 0.23 carats, and 42 round-cut diamonds weighing 0.38 carats on both earrings.

The maison’s Magical Setting Collection reworks one of the most classic jewellery expressions of the floral cluster, a design that dates back to the 14th century. With a dream of intensifying the life and light of a gemstone, Chopard’s Co-President and Artistic Director Caroline Scheufele challenged her craftsmen to realise her creative vision of making settings disappear. The result: Centre stones of each cluster are set in barely-there claws, while surrounding stones are held in place with no visible means of support or metal visible from the front or top of the jewel. Instead, the cluster is underpinned by an entirely new structure pioneered by Chopard. The dazzling light display is showcased beautifully here in this white gold ring with a 5.04-carat round Sri Lankan blue sapphire, encircled by 12 round blue sapphires and 12 round diamonds totalling 5.77 carats and 1.46 carats respectively.

The Frame theme, from the Blue Book collection entitled Tiffany Jewel Box, introduced a new Tiffany icon that illuminates the most captivating diamonds and coloured gemstones in a way that only a fine jeweller can. The geometric frame motif highlights inner gemstones that appear to be floating within structured boundaries. This impressive platinum necklace is adorned with seven sapphires totalling 36 carats, five aquamarines of over 16 carats, four blue cuprian elbaite tourmalines totalling 13 carats, as well as four blue tourmalines weighing over 13 carats, and 40 diamonds totalling eight carats. Showing off the design and settings perfectly are the gemstone cuts, which include emerald, cushion, oval, pear and square shapes, exemplifying Tiffany’s legacy in gemstone discovery, innovative design and exquisite craftsmanship.

The vibrant city of New York has been a source of inspiration for Harry Winston designers since the house first opened in 1932. In continuing this tradition with an extension of the New York Collection, this Fifth Avenue range led designers on a cross-town journey exploring various neighbourhoods, nuances and landmarks that shaped Mr Winston’s life. These Fifth Avenue Sapphire and Diamond platinum-set earrings evoke the aerial view of Rockefeller Center – the location of Mr Winston’s first office – and its large pavilion known as The Plaza. A nod to the bold colour and popular geometric Art Deco aesthetics of the 1930s, the magnificent design showcases 62 sapphire beads totalling 28.25 carats and 132 diamonds weighing 11.76 carats.

Van Cleef & Arpels’ Romeo & Juliet collection of over 100 high jewellery pieces offer a new vision based closely on the 1597 Shakespearean tragedy, which range from the figurative to the abstract. This Verona necklace evokes the architecture of the city it is named after with its graphic lines. They bring to mind winding alleys, hidden passageways and bridges over the Adige, whose waters are suggested by a stream of sapphires and diamonds. The interlinked elements form different shapes in a manner typical of ornate necklaces of the Renaissance. A luminous 23.86-carat emerald-cut Burmese blue sapphire is set at the heart of the pendant, echoing the other sapphires spread across the necklace in three shades of blue. The transformable piece can be worn in various ways: as a long necklace, a short necklace accompanied by a bracelet, or as two bracelets and a brooch.

For her White Label Collection of exquisite and romantic jewels, Taiwanese contemporary high jewellery designer Cindy Chao took inspiration from nature during the changing seasons, architecture, haute couture and mysterious aquatic creatures. For this pair of asymmetrical earrings, she has reimagined the classic motifs of flower petals with her unique sensibility, investing them with life and emotion. Truly a work of art, this 18k white gold masterpiece features six cabochon blue sapphires weighing a total of 13.79 carats, which are encircled by 576 diamonds weighing 12.11 carats and 208 sapphires totalling 5.27 carats.

The Latest Gemstone Jewels to Set Your Sights on This Year

Feast Your Eyes on these Artful Jewellery Creations by Cindy Chao