These Incredible Showpieces are the Ultimate High Jewellery Flex 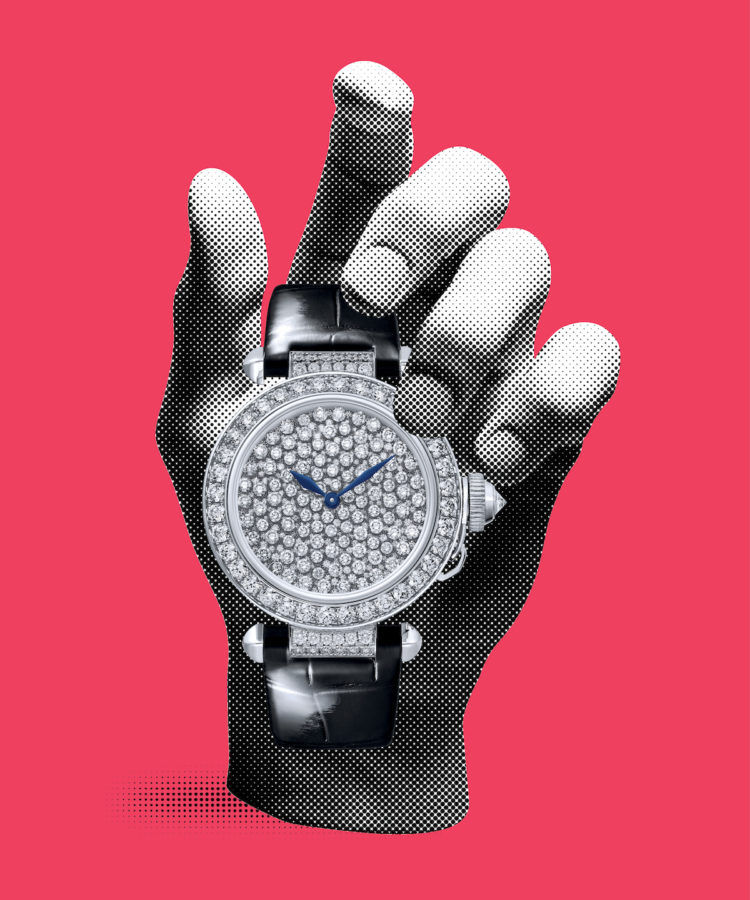 At the heart of showpieces presented by the most influential maisons are historically innovative and often proprietary techniques developed and refined by their master craftsmen through time.

Here are 12 incredible examples of their jewellery-making expertise. 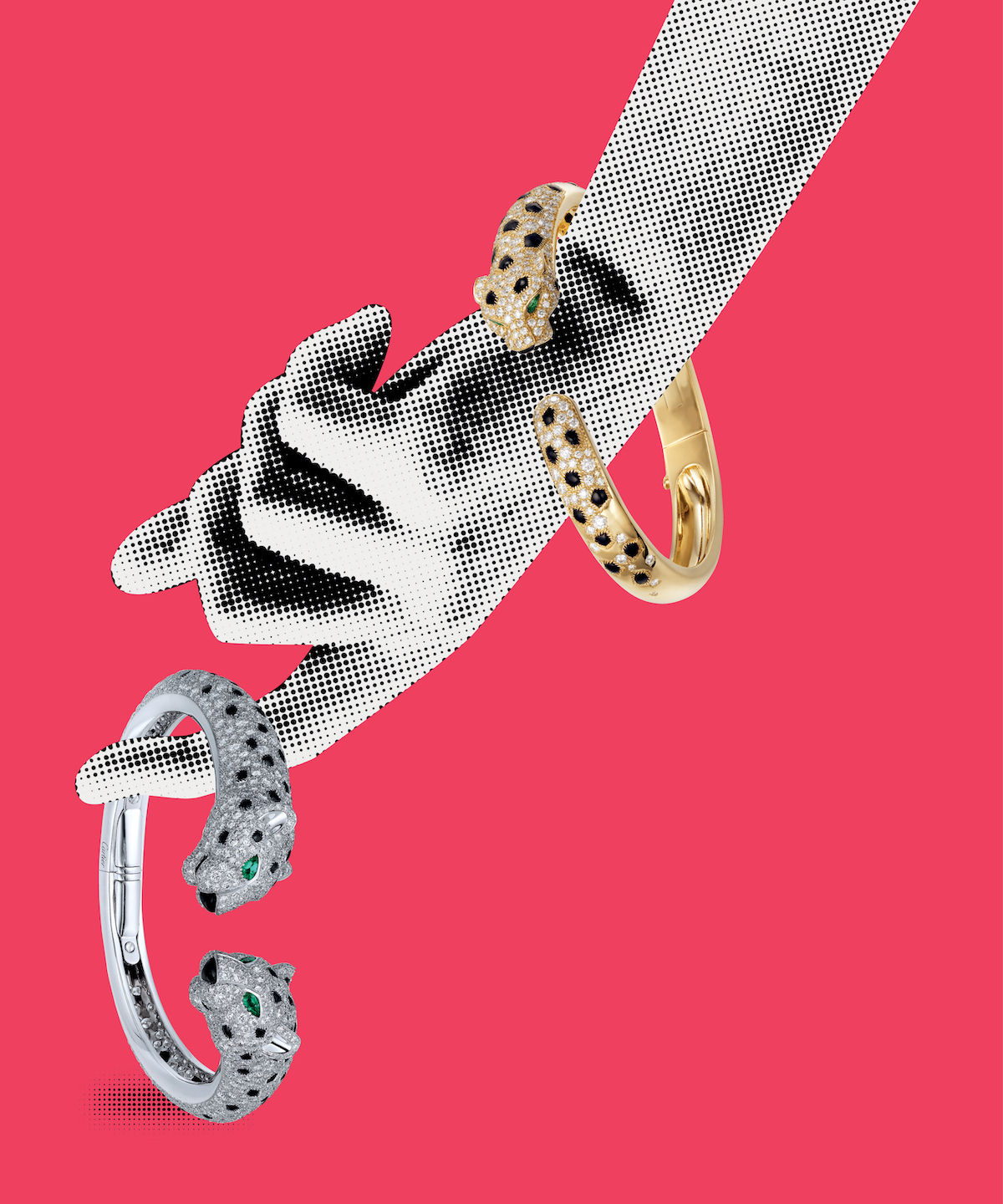 Ever since the first incarnation of the Cartier panther on a 1914 wristwatch as a spotted motif, the creature has been reimagined in countless ways that span realism to abstraction. A proprietary craft developed for its beloved house icon is the panther fur setting, which features individual gemstones encircled by tiny gold threads folded over each stone to resemble the animal’s coat. For a most lifelike and graceful feline, honeycomb openwork, articulation work, onyx and gemstone decor, and sculptural diamond paving are also always employed. All the elements are displayed here on these La Panthère de Cartier gold bracelets. Both set with emerald eyes and onyx spots, the one on the left boasts 923 brilliant-cut diamonds totalling 10.30 carats, while the piece on the right has 225 brilliant-cut diamonds weighing 2.51 carats. 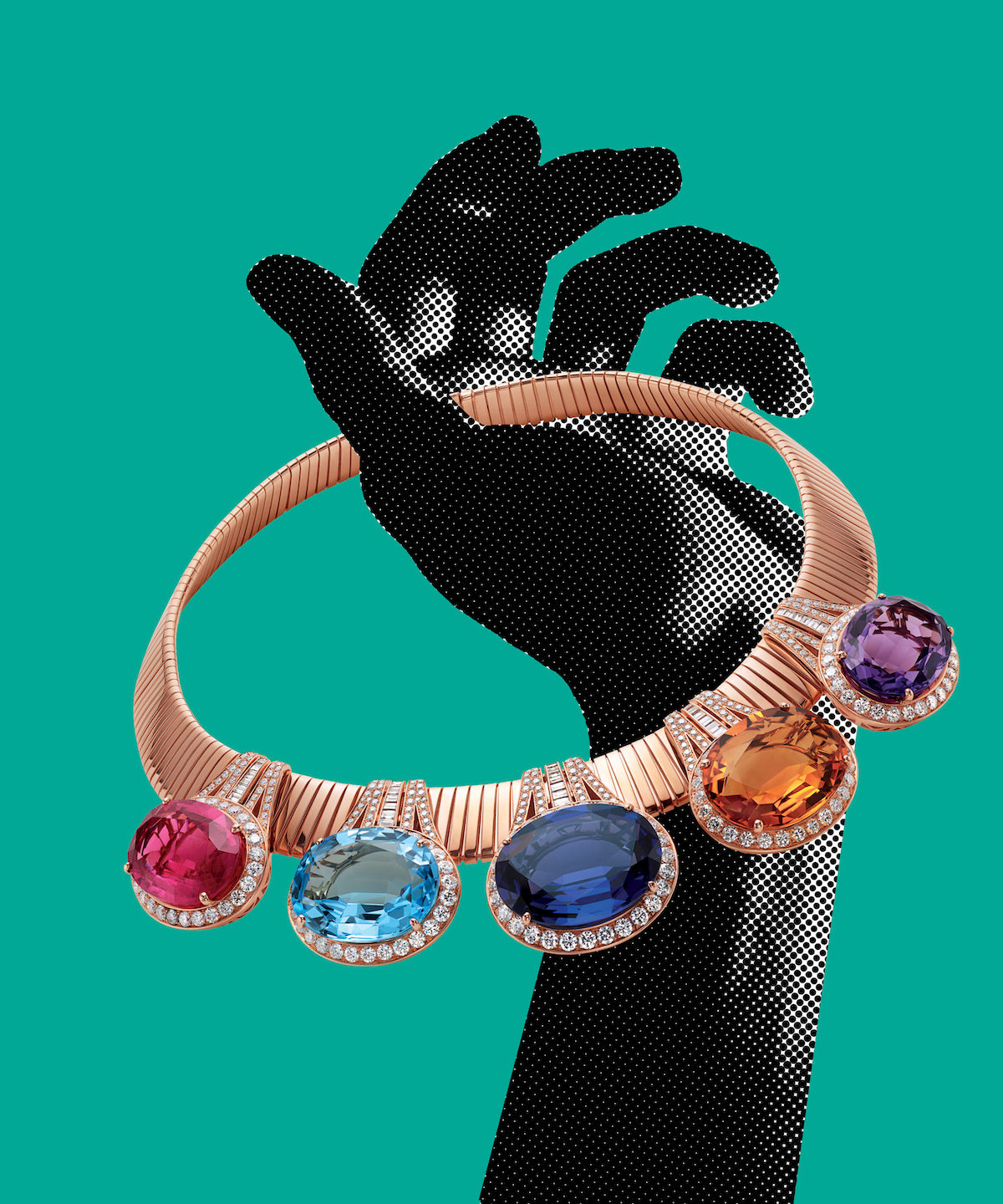 “Tubogas” is named after the type of gas pipes common during the second industrial revolution in the late 19th century, when the technique was invented. The flexible, hollow band is made by wrapping flat strips of gold tightly around a coiled spring without soldering, and was featured by jewellers
in the 1930s and ’40s. Bvlgari revived the technique in the ’70s, after which it won great acclaim for the expensive and labour- intensive innovation of creating tubogas coils in high-tech steel. In a stroke of ingenuity, the technique was combined with the Roman jeweller’s house symbol of a snake to create the wildly popular Serpenti Tubogas. This Spacecruisers high jewellery necklace puts the focus on the flawless construction of the pink gold tubogas band, as well as the beauty of the gemstones: a 25.33-carat rubellite, a 34.70-carat citrine, a 43.81-carat topaz, a 46.20-carat tanzanite, a 24.46-carat amethyst, 30 step-cut diamonds and pavé-set diamonds. 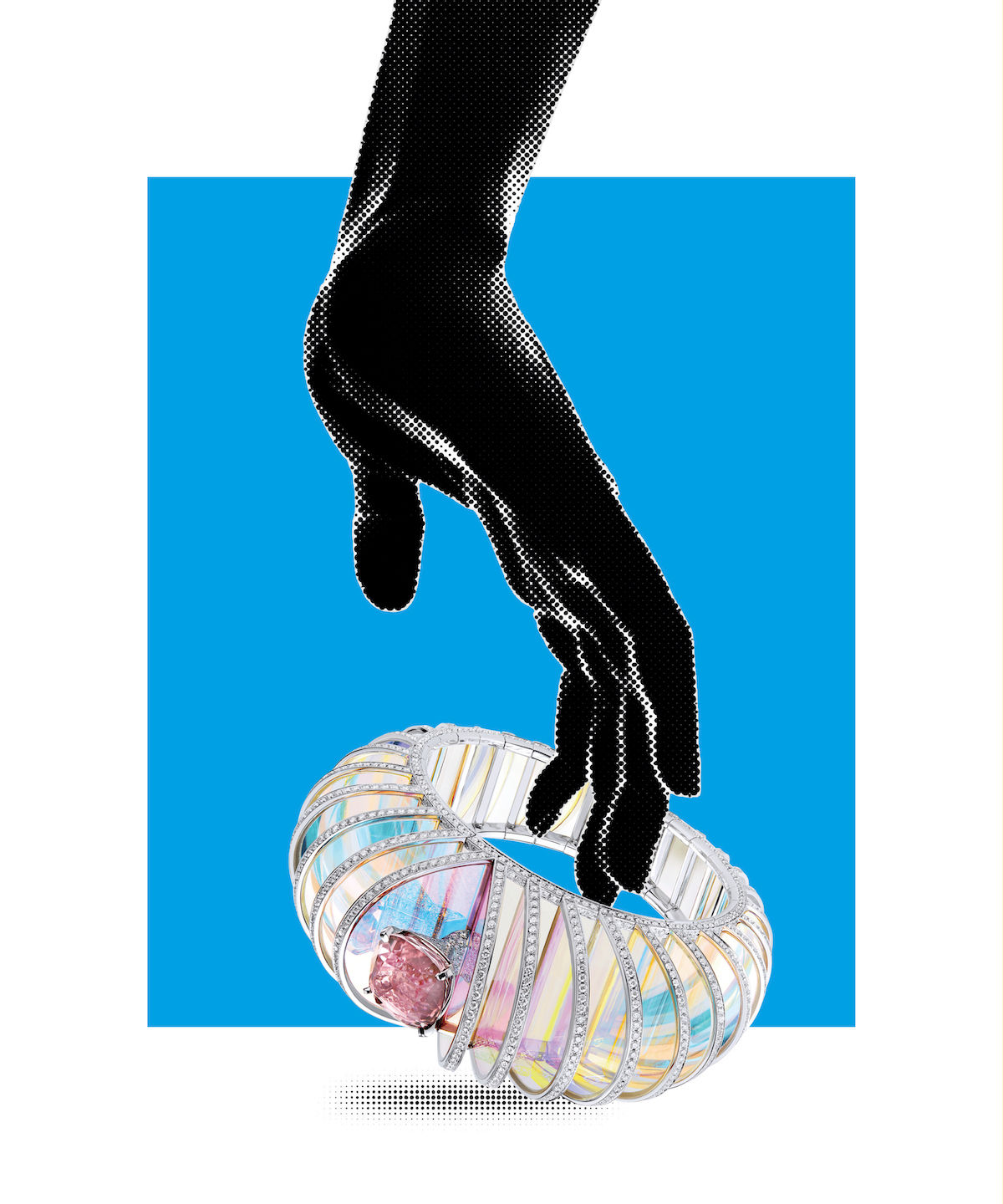 For Boucheron’s latest light-inspired Carte Blanche, Holographique collection, it worked with French manufacturing giant Saint-Gobain to produce an effect never-before- seen in high jewellery: the dazzling holographic show of colour and dimensions on rock crystal and ceramic. It is achieved through a technical process called dichroic treatment, which is used on medical lenses, landing strip markers and airport runway lights. Crushed and powdered metal oxides of titanium and silver are deposited on the pre-shaped crystal and white ceramic pieces through melting and spraying the compound at 280 deg C, taking about 10 coats to achieve the intended high shine. Feast your eyes on the result: the Holographique white gold bracelet set with a 14.93-carat cushion-cut pink tourmaline and semi-circular slivers of holographic rock crystal paved with diamonds. 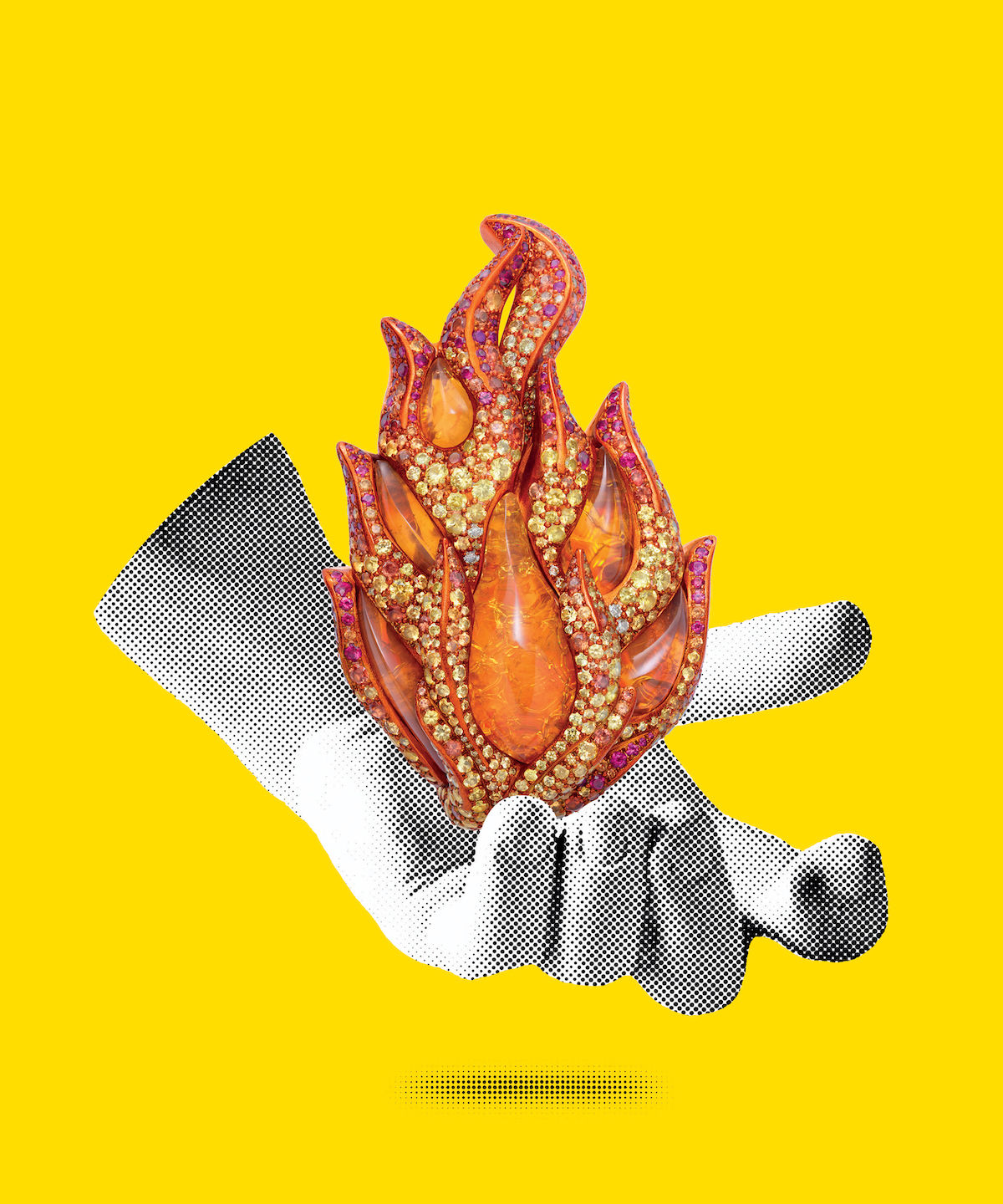 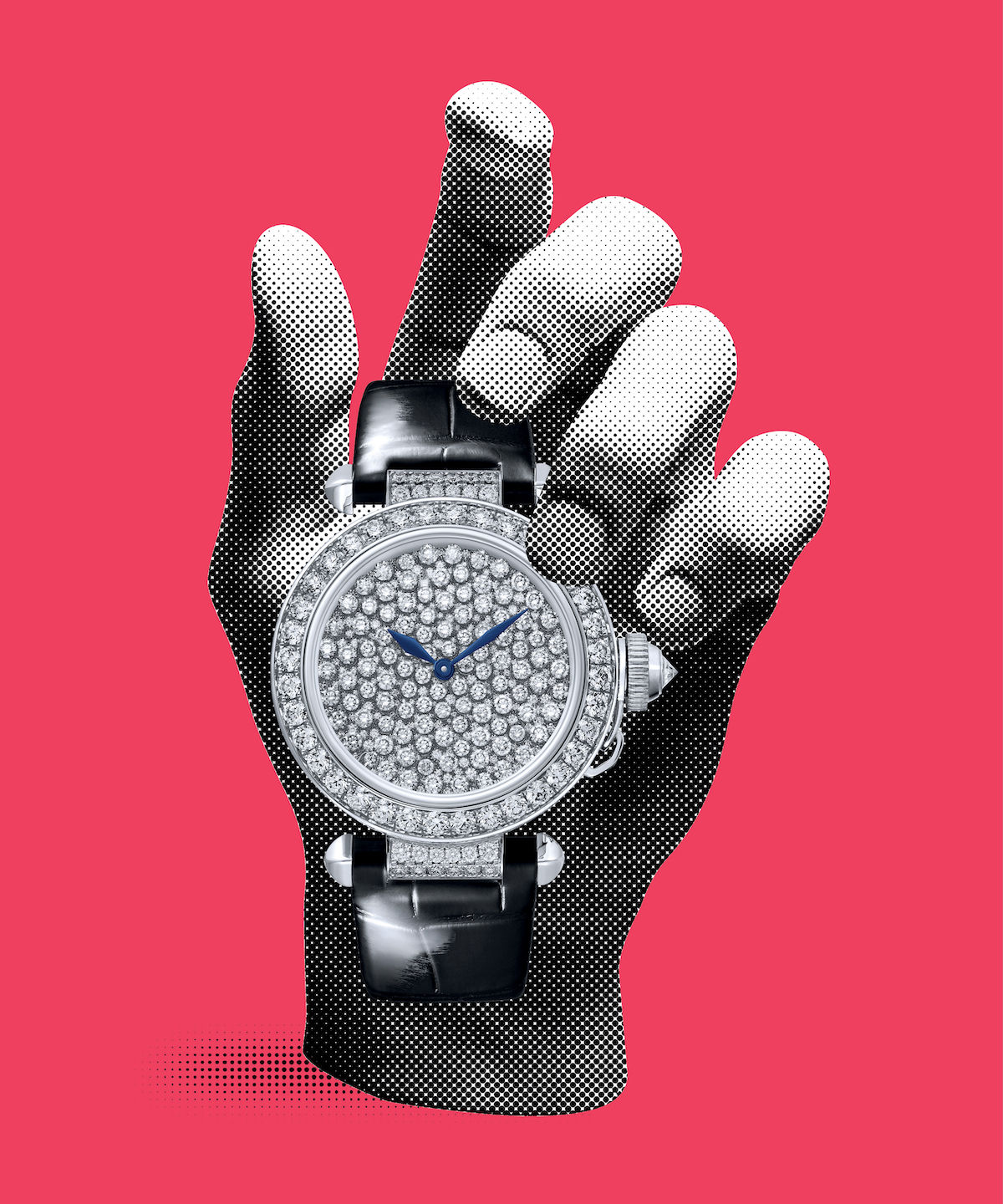 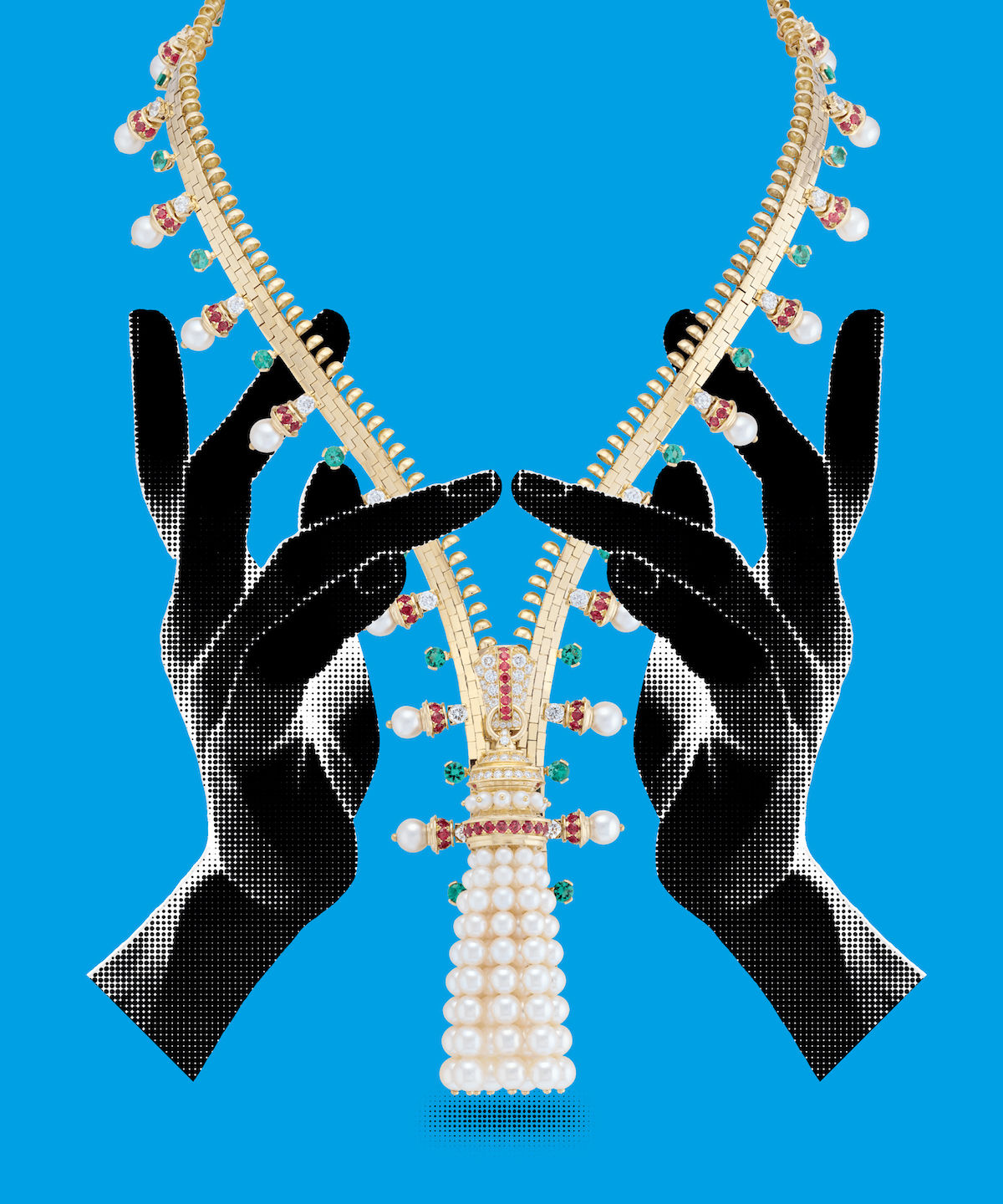 Elevating the zip into a work of bejewelled virtuosity is Van Cleef & Arpels’ famous zip technique. The idea for it came from Duchess of Windsor Wallis Simpson, who had put across the suggestion in the late 1930s to Renée Puissant, the maison’s artistic director and daughter of its founding couple. The zip necklace’s eventual realisation in 1950 made waves not just for the sheer complexity in craftsmanship, but also its design brilliance and versatility. It functions exactly as a zip fastener, and is also transformable into a bracelet thanks to its flexibility and suppleness. This captivating Zip Antique Lampion necklace in yellow gold with rubies, emeralds, white cultured pearls and diamonds is one of the very few and covetable zip creations produced by Van Cleef & Arpels annually. 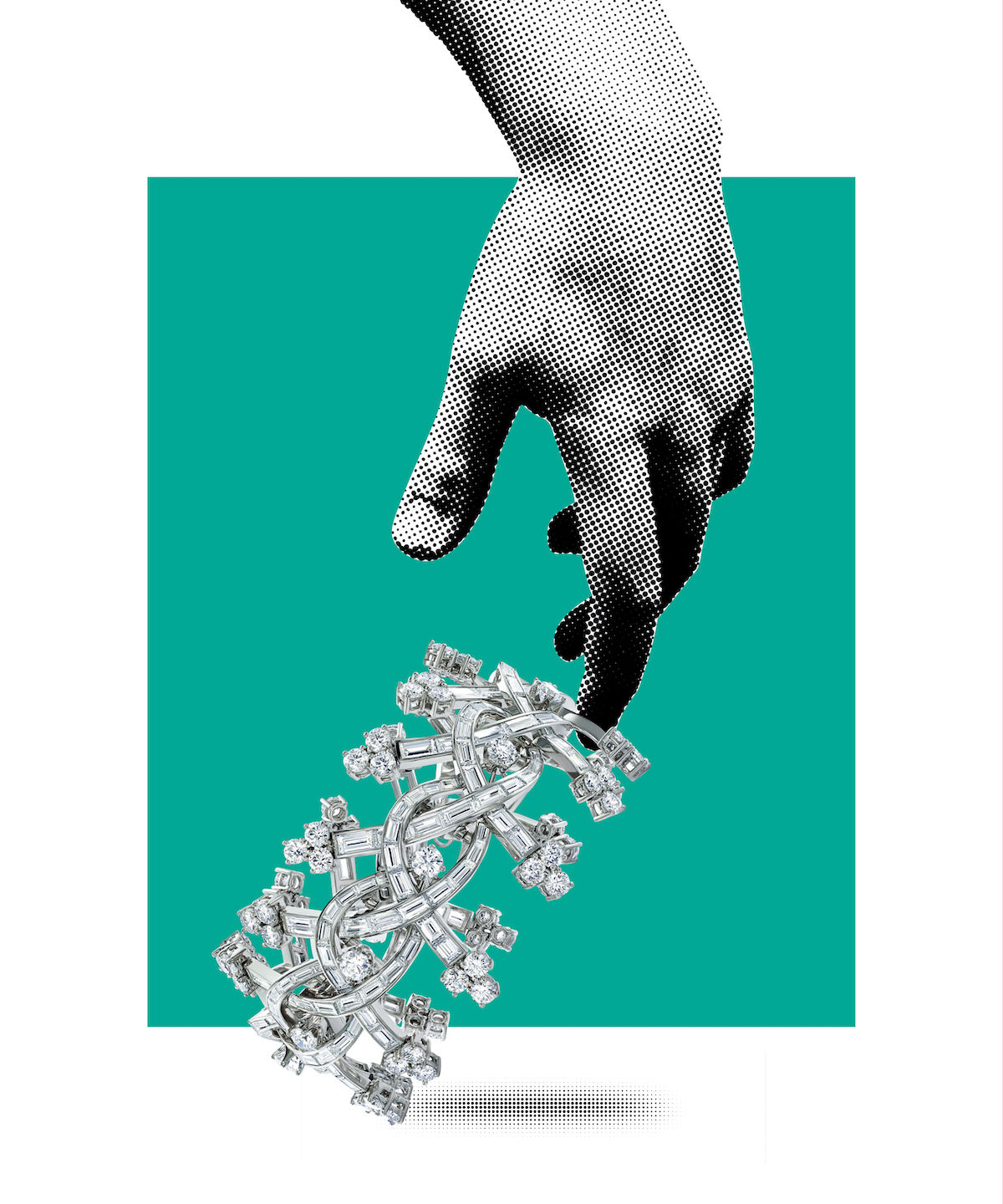 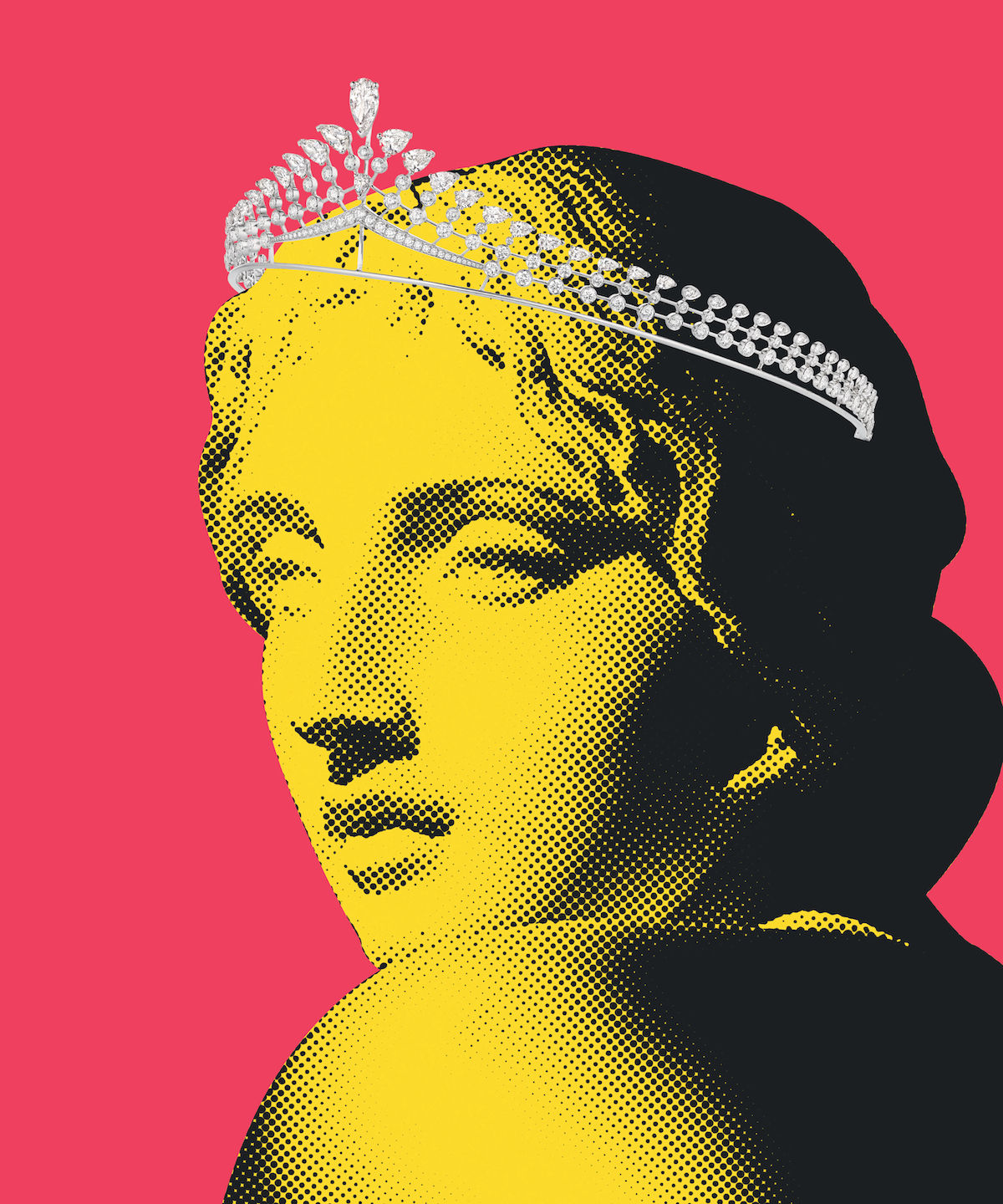 French for knife-edge thread, the fil couteau is a signature technique at Chaumet, which is renowned for jewels that fuse elegance with airy lightness. It is an openwork technique that sets gemstones on very fine strips or bars of metal – such that light fully penetrates the creation, illuminating the stones and causing the metal structure to appear like it has nearly vanished. The technique also imbues the piece with incredible fluidity and lightness. This wearability is a trademark feature of the Parisian house, which began making diadems, tiaras and transformable jewels for European royalty requiring these attributes since the 18th century. Conceived for the modern-day princess is this Joséphine Valse Impériale tiara in white gold with pear-shaped and brilliant-cut diamonds. 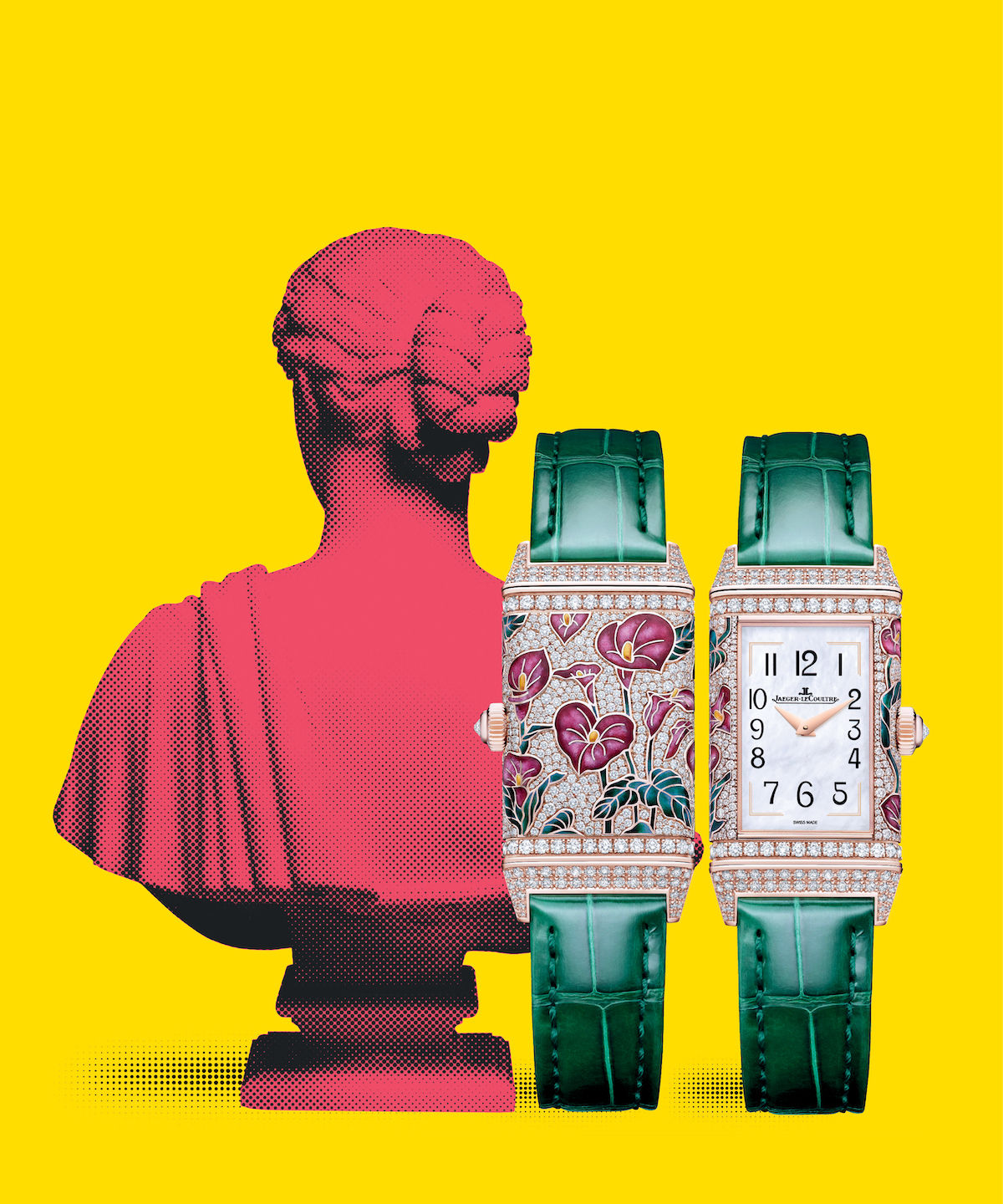 For the decoration of its Reverso watch cases, watch manufacture Jaeger-LeCoultre had developed this high jewellery technique in 2002. An exacting and intricate gem-setting craft, it recreates the mesmerising and scintillating effect of sunlight on snow. Diamonds of different diameters, each measuring 0.5mm to 1.6mm, are carefully selected, after which they are juxtaposed with one another and skilfully set over a surface to cover its entirety. Every piece of snow setting is the unique work of an individual artisan. Here is one of four models from Jaeger-LeCoultre’s limited-edition Reverso One Precious Flowers, which shines the spotlight on the expertise of its venerable Métiers Rares (rare handcrafts) workshop. Featuring arum lilies, it showcases enamelled flowers and leaves against a snow-set diamond background – all requiring 95 hours of labour. 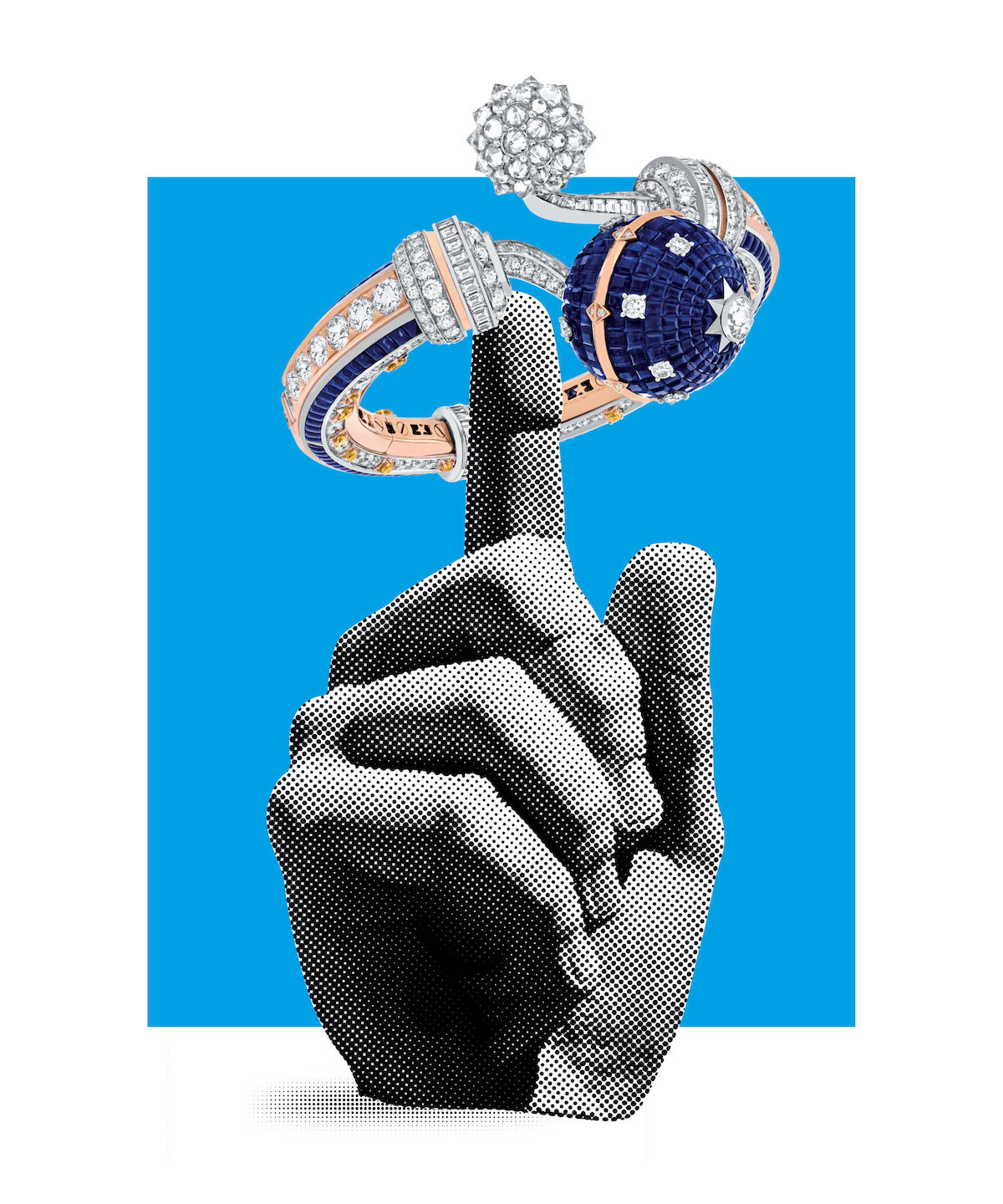 One of the most recognisable and laborious settings ever, Van Cleef & Arpels’ mystery setting was patented in 1936 and has since remained an important hallmark. It features individually precision-cut stones that are inserted one by one into gold rails carved into a piece of jewel. The tightly fitted stones cover the entire set surface smoothly and continuously, creating a soft lustre and showing no metal. Besides the traditional mystery setting, the jeweller also developed variations including the navette mystery setting and vitrail mystery setting – placing the limelight squarely on the gems. This artistic achievement is epitomised by the Sous les étoiles Terre et Lune white and rose gold bracelet with traditional mystery-set sapphires, blue and yellow sapphires, and diamonds. 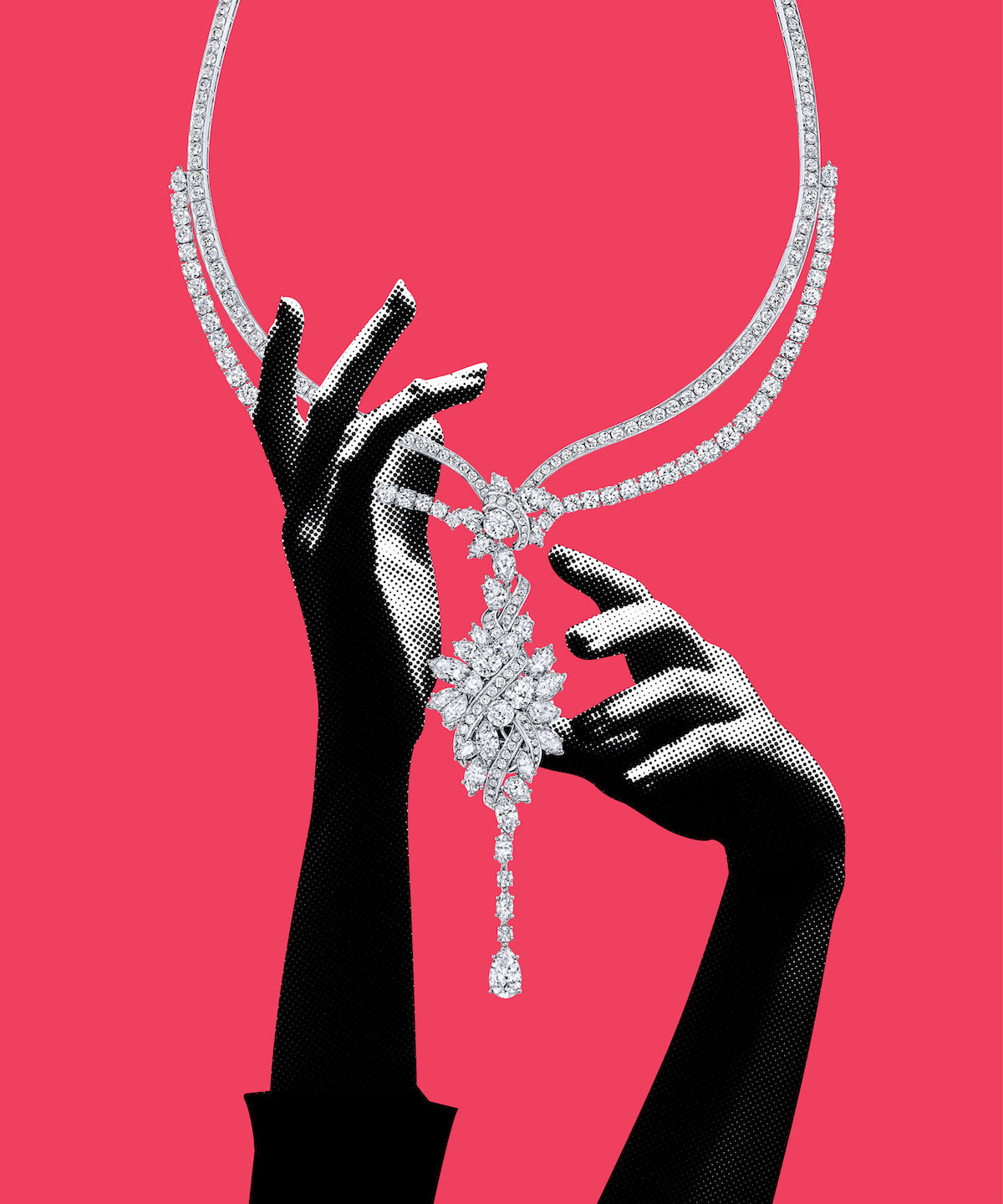 A setting that masterfully showcases the beauty and brilliance of diamonds surely comes from a house that is well known for the gems. It is none other than Harry Winston, whose founder Mr Winston made a name for himself in the 1940s and ’50s as New York’s king of diamonds, and the owner of the Hope Diamond. He believed in letting diamonds take the lead in dictating design, and hence in the ’40s invented the Winston cluster setting, which combines pear, round and marquise- cut diamonds in a visually stunning asymmetrical and three-dimensional composition revealing minimal visible metal. His vision is exemplified by this transformable Secret Cluster platinum necklace bearing a locket pendant and 530 diamonds totalling 81.85 carats. 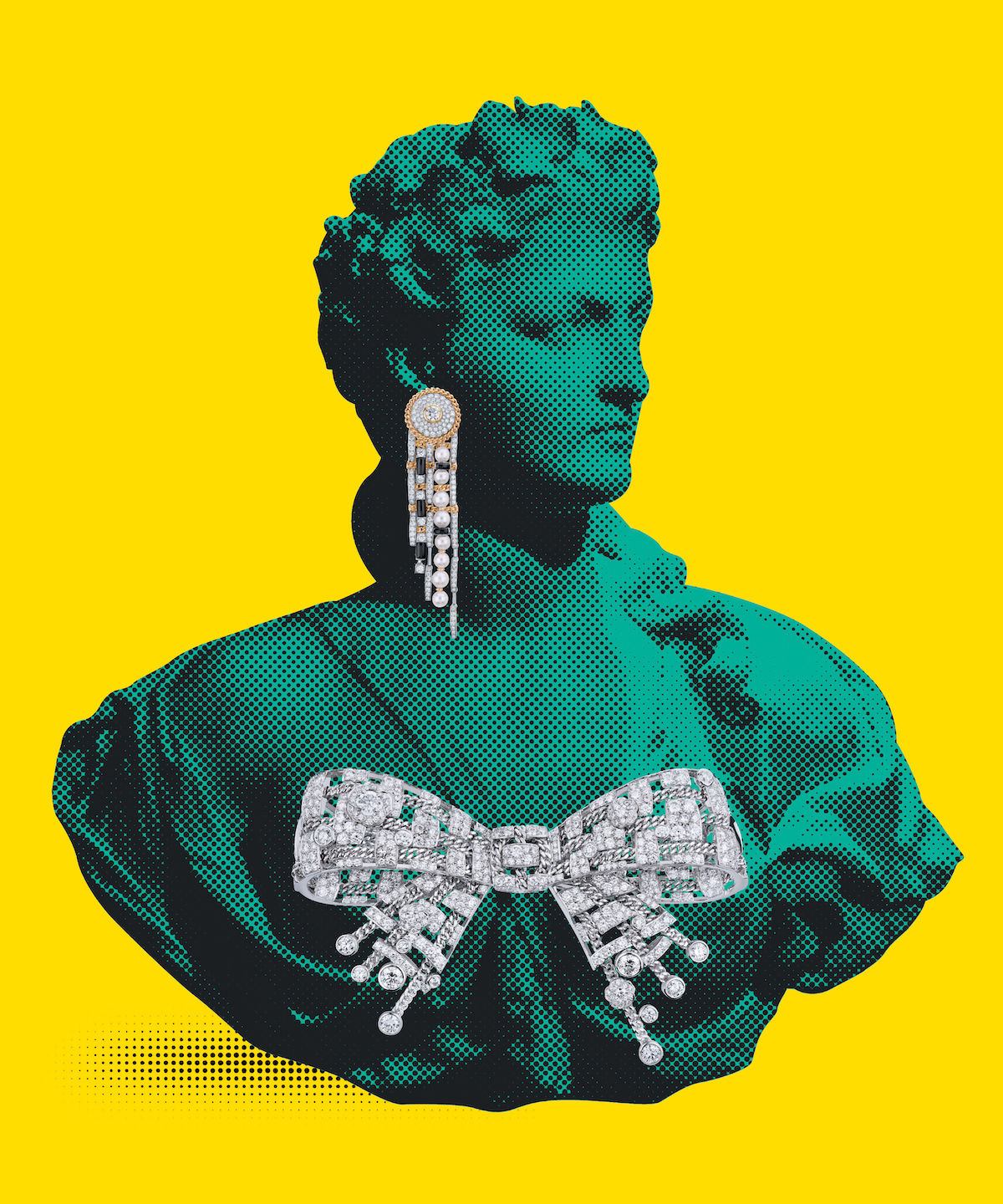 Only a couturier synonymous with tweed like Chanel would imagine, and accept the challenge of, interpreting the woollen fabric as jewellery art. Just last year, the maison launched its Tweed de Chanel collection debuting this new technique developed by its high jewellery workshop. It comprises special articulation features that breathe movement, suppleness and lusciousness into precious metal. Gems are also layered and intertwined on several planes, replicating the irregular texture and depth of tweed. Each gemstone setting has also been pared back to a minimalist extreme to reduce the unevenness of the grain, making every piece soft to the touch. Depicted here are a Tweed Contrasté yellow gold and platinum earring with diamonds, pearls and onyx, and the Tweed Brodé white gold and diamond brooch.