When is Jewellery an Art? We Speak to Experts on Gems & Jewels to Find Out 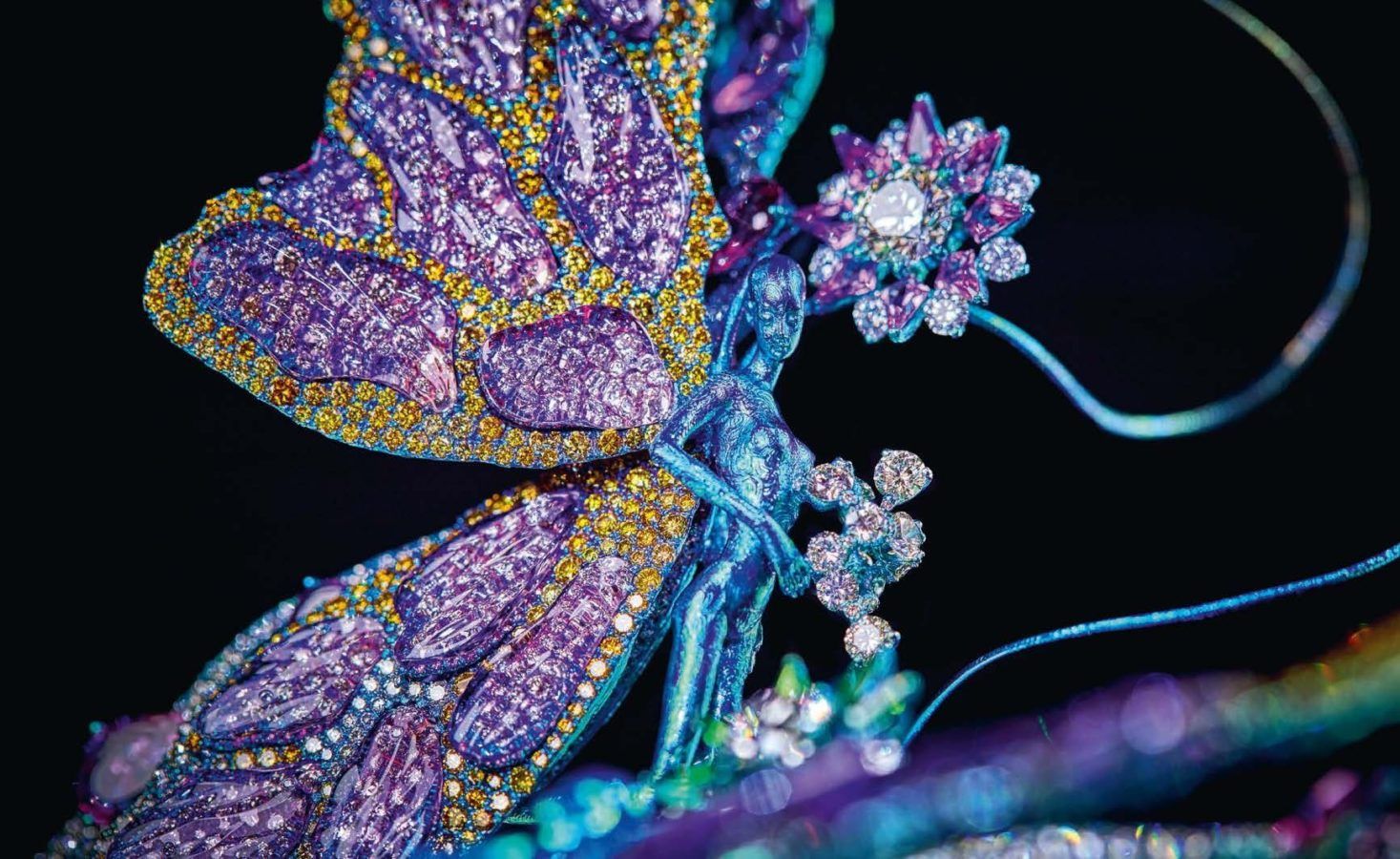 Style
When is Jewellery an Art? We Speak to Experts on Gems & Jewels to Find Out
Share
Next article

There are artists who make jewellery, and then there are jewellers who make art – are they one and the same? We sat down with today’s arbiters of gems and jewels to find out.

Is jewellery an art form or a craft?

I found myself asking this question when I first chanced upon the works of Wallace Chan. I thought he was a jeweller but he proved me wrong when he opened the doors to his studio and I found myself transfixed by his art and sculpture. He makes jewellery; indeed, in his hands, rock crystals come to life with three-dimensional faces, and emeralds, sapphires, jade, diamonds and more make the most scintillating of cicadas and butterflies, all set in lightweight titanium. But these one-of-a-kind pieces, so enchanting and technically challenging, made it hard for me to label Chan a jewellery designer. Surely, this has to be art. Also, Chan’s reputation as a sculptor and artist has taken him to Beijing, Basel and beyond. His work has been showcased alongside grandmasters such as Monet and Degas, and he’s exhibiting this month in Venice at Fondaco Marcello, in a show titled TOTEM. Chan must consider himself an artist.

“It’s a difficult question to answer,” he replies politely, “as I’ve always tried to avoid putting myself and what I do in a box. All I want is to create. Sometimes I feel more like a translator, using colours, forms, shapes and textures as my language to translate messages from the universe.”

It’s a fair assessment, and I’m reminded of other contemporary jewellers, such as Joel Arthur Rosenthal and Cindy Chao, whose creations transcend craft, and whose jewellery is deemed museum collectibles by those in the know. Rosenthal was the first living jeweller to have had a solo exhibition at New York’s Metropolitan Museum of Art, likely paving the way for other jewellers to follow suit.

Chan later marked another milestone when his work was included in the British Museum’s permanent collection (a first by a contemporary jewellery artist), while more recently, Chao’s Peony Brooch was inducted to the William and Judith Bollinger Gallery at the V&A in London.

The terms jewellery art and art jewellery aren’t new. According to Wallace Chan, artists in the past who dabbled in jewellery, including Pablo Picasso, Salvadore Dalí, Alexander Calder and Man Ray, naturally viewed their jewellery as art. “Because of the fact they’re artists first, it’s only natural to call their jewellery art,” he muses. “I feel jewellery should at least be created with the purposes and qualities to transcend, if it’s to be considered art. It’s also important for a piece to be unique and to embody the essence of its creator.”

Chao, who considers herself a jeweller-artist, has a similar sentiment. “I believe a great piece of art must be seen, be understood and be appreciated,” she says. “At the same time, to be able to achieve such, the art must transcend culture, language and geographical boundaries. The same should be true for jewellery and I believe every piece of high jewellery should be a miniature piece of art in a wearable form. This philosophy is incorporated in all my creations to bring together art and jewellery.”

To discover more about art jewellery, I turn to auction-house specialists to find whether this was a category unto its own and if there’s growing interest in the niche. Surely there must be more to jewels than the biggest, brightest diamond – the incredible vision and expert craftsmanship demonstrated by jeweller-artists alone must capture the attention of the collector. But the answer isn’t as simple as it might seem.

“Art jewellery for me is jewellery that’s infinitely more than a simple central stone and side stones,” says Paul Redmayne, Phillips’ head of jewellery private sales. “It’s a design that’s beyond a D Flawless, it’s beyond an unheated Burmese pigeon blood ruby, beyond a Colombia no-oil emerald. It’s an aesthetic creation that makes you pause, that makes you tilt your head to the side and exhale an admiring ‘hmm’. It’s bold, it’s risqué, it challenges the conventional jewellery rule book … in the same way that art encompasses so much – from the Old Masters to the Impressionists, to the Contemporary, to Street Art – so Art Jewellery can be as eclectic.”

“There is, of course, a market for jewellery made by these artists, but it’s far smaller and much richer than perhaps one would expect,” he says.

Small, perhaps, but not insignificant. Just last October, Phillips presented New Modernism, a selling exhibition in collaboration with Vivienne Becker of Vivarium that featured 27 lots by 16 modernist designers of the 20th and 21st centuries. Leading the exhibition was a 1930s pin designed by the sculptor Alexander Calder, who made jewellery in brass and silver. Other exceptional lots included jewellery pieces by Aldo Cipullo and Dinh Van, who worked for Cartier in the 1970s and remain the only two designers who were ever allowed to sign their works for the house; and London-based Andrew Grima, who in his heyday was a favourite of Princess Margaret, nurturing a rebellious style of jewellery design that was organic, hyper-natural, characterised by rugged textured gold and set with rough crystals.

Modernism emerged in the 1920s and 1930s, then resurfaced in the late 1960s, prompted by the advances in space exploration during that period and the trend for futuristic fashion at the time, courtesy of Courrèges, Pierre Cardin and Paco Rabanne. Today there’s yet another resurgence, as contemporary artists and designers find inspiration in the fast-paced technological world. Now more so than ever, the worlds of art and jewellery seem to be colliding.

“It feels as if jewellery has found its mojo and is proudly standing tall as an artistic form,” says Redmayne, “with designers boldly expressing themselves through the use of different materials, stones and concepts.”

Today’s most influential artist-jewellers are those who are creating something so different, so authentic and so rooted in their own identity that, says Redmayne, it “transcends the mere materials of which it’s composed”.

Thus, art jewellery, to Redmayne is less about the choice of material such as gold or platinum, or the use of rare stones. He lists as an example Fabio Salini, a Rome-based designer whose jewellery is greatly influenced by 1920s Modernism, who sets diamonds and pearls in carbon fibre for a seriously striking look; or the Mumbai-based husband-and-wife team Studio Renn, who created jewellery with concrete. Made in collaboration between Studio Renn and Mumbai-based architectural firm Material Immaterial Studio, the Strangler Ring is made in concrete and reinforced with an organic structure in diamonds and gold. The creation is treated in acid that breaks down the structure, softening the edges to partially expose the inner form.

But talk to another auction specialist and you may get a slightly different interpretation of art jewellery. At Christie’s, the auction house makes no distinction between artists who create jewellery or jewellers who are artists, stating that “at auction, we cater to the collecting tastes and needs of our clients more often by designs, types of stone and market demand”. Instead, Christie’s specialists would discuss the best way or category to offer a piece, giving it the flexibility to sell a jewellery piece by artists in a jewellery auction, or a jewellery art piece at an art auction.

We can’t forget that some of the best-known jewellers of all time have been artists in their own right, whose rare ability to marry exceptional stones with exception craftsmanship has inspired legions of designers to create in ways previously unimaginable.

Rosenthal – better known as JAR – is one of them, according to Regine Ngan, Sotheby’s Asian head of jewellery. “Many others in my industry would agree JAR created exceptional pieces that changed the course of jewellery design,” she says. “His passions for colour, choice of stones and use of materials are unparalleled. He worked very closely with one or various craftsmen to create pieces he envisioned, bridging the relationship between arts and craft.”

As for present-day designers, Ngan recommends the sleek and contemporary designs of Munich-based family jeweller Hemmerle, whose one-of-a-kind pieces are at once stylish and artsy. “Hemmerle’s recent theme is derived from vegetables, which is a rather unusual subject, but they bring a joyfulness through colours and gemstones,” says Ngan. Anabela Chan is another newcomer she’s keen to highlight, noting the jeweller’s finesse in integrating nature into her designs in a way that’s both feminine and youthful.

There’s no shortage of Asian jewellery-artists in this category, says Christie’s Jewellery Asia’s chairman Vickie Sek, who’s been amazed by the works she’s come across, season after season, in more than 20 years. Sek categorises art jewellery as a “creation that takes the design to a higher level, pieces that convey unique aesthetics, extraordinary craftsmanship, skilful use of materials and that can hold the attention of viewers.

“These jewellery-artists keep on stepping forward and refining their designs, with new skills learned and new ideas to use different stones to reflect their evolving contemplation of the world,” she says.

Cindy Chao and Wallace Chan are among her favourites, as are Edmond Chin, who’s designed beautiful necklaces for Boghossian, and Michelle Ong, who somehow transforms hard gemstones into soft and ethereal designs for her brand Carnet.

One thing everyone agrees on is that art jewellery must to be wearable. Indeed, Ngan defines art jewellery as “an expression of art through a three-dimensional form that’s wearable.

“An artist has to consider their canvas and, where jewellery is concerned, the canvas is the body,” she says. “While the body creates limitation, I believe it also liberates an artist’s skill – after all, when it’s worn the piece is judged on its practicality. Factors such as: is it beautiful?, is it too heavy?, does it compliment the wearer? – all of them matter.”