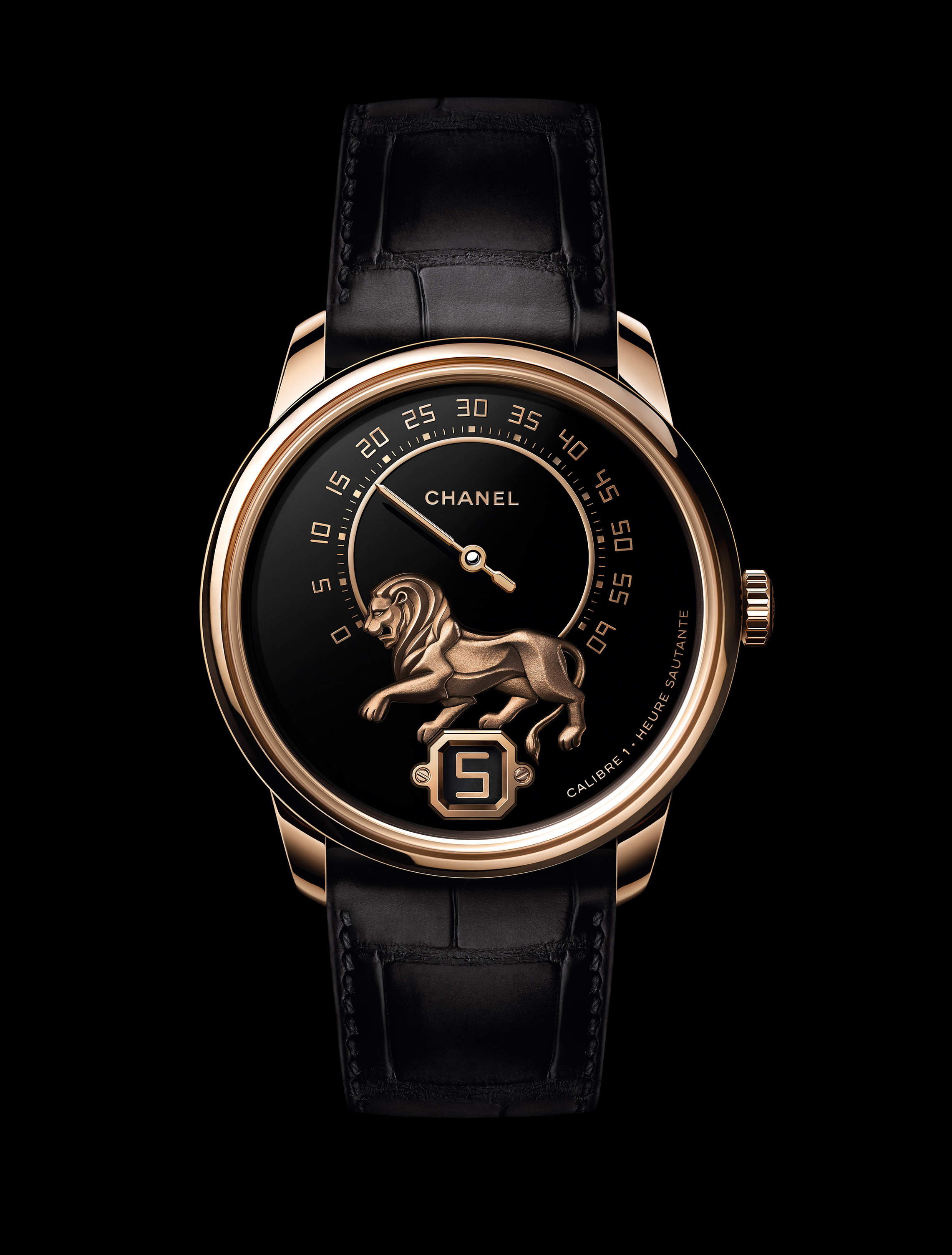 When Chanel introduced its first in-house movement (Calibre 1) through its first dedicated men’s line (Monsieur de Chanel), it disclosed a nugget of information: The lion, beloved by its founder and eternal muse Gabrielle Chanel as a talisman of strength, would be present in all of Chanel’s future in-house movements. True to its word, all three of them — beginning with the Calibre 1 and including this year’s Calibre 3 — feature a small lion motif attached to one of the bridges.

SEE ALSO: Laurence Graff on why he loves the Lion City

For the last two years, the lion was like a guardian angel, hidden in the movement or discretely placed on the crown or the buckle, faithfully safekeeping Chanel’s passage through time. All that has changed: At Baselworld 2018, the Maison threw the spotlight on the majestic beast, adding four models to its Monsieur de Chanel collection.

Watch Out: Lion at 6 o’clock

Replacing the small seconds sub-dial that used to be at 6 o’clock, however, is a carved lion figurine in either beige or oxidised white gold (depending on case material). Its sinewy form is hand-carved by the same Genevan artist responsible for the glyptic and gold-engraving work in the Mademoiselle Privé line. Presented on a black Grand Feu enamel dial by foremost enamel artist and long time collaborator Anita Pochet, each variant is available only in 20 numbered pieces.

Clocking In: Looking into the crystal ball

The second addition is the Monsieur de Chanel Chronosphere clock, made in collaboration with Swiss clock specialist L’Epée 1839. Limited to only five pieces, it takes inspiration from — no surprises here — an objet d’art in Gabrielle’s apartment, which depicts a large rock crystal sphere supported on the backs of three bronze lions made by Goossens Paris.

The Chronosphere is powered by a movement designed by Chanel’s Watchmaking Creative Studio, but was developed and manufactured by L’Epée 1839. Time is displayed on two spherical rotating discs printed with the same numerical typography as the Monsieur de Chanel watch. Enclosed within a glass sphere supported by three hand-sculpted galvanised bronze lions, the movement oscillates at a steady 2.5Hz and runs on a 7-day power reserve.

Pocket This: The guard cat on duty

In the Monsieur de Chanel pocket watch — a first for the brand — Chanel fits a modified and unique version of the Calibre 2 (launched in 2017, it debuted in the Premiere collection) into the pocket watch. Although the movement’s components and regulating organ remain, the bridges and mainplate have been redesigned to reflect a more masculine aesthetic. Housed in a white gold case rimmed with 57 baguette-cut diamonds, it features black ADLC-coated components that have been chamfered and bevelled to exude a more 3D effect. Most of the screws have also been hidden to enhance its stealth appeal.

Designing something spectacular to house the pocket watch befitting of its technical beauty was another priority. The pocket watch can be detached from its gold chain and hung on a black obsidian frame as a table clock. Guarding this precious objet d’art is the imposing structure of a lion in white gold coated in black HyCeram (a special material that combines the properties of high-quality ceramics with modern three-dimensionally crosslinked polymers), with its paw possessively atop a gold sphere set with baguette-cut diamonds.

Once again, it is Gabrielle’s influence that helps shape the creative decisions at Chanel. The lion’s deliberate pose — a universal symbol of wielding power over the world — is inspired by the many figurines of the animal found in her Rue Cambon apartment. Born under the Leo astrological sign, Gabrielle resonated with this symbol as she aspired to gain control over her own destiny and life.