The new Montblanc Star Legacy shines with these highlights 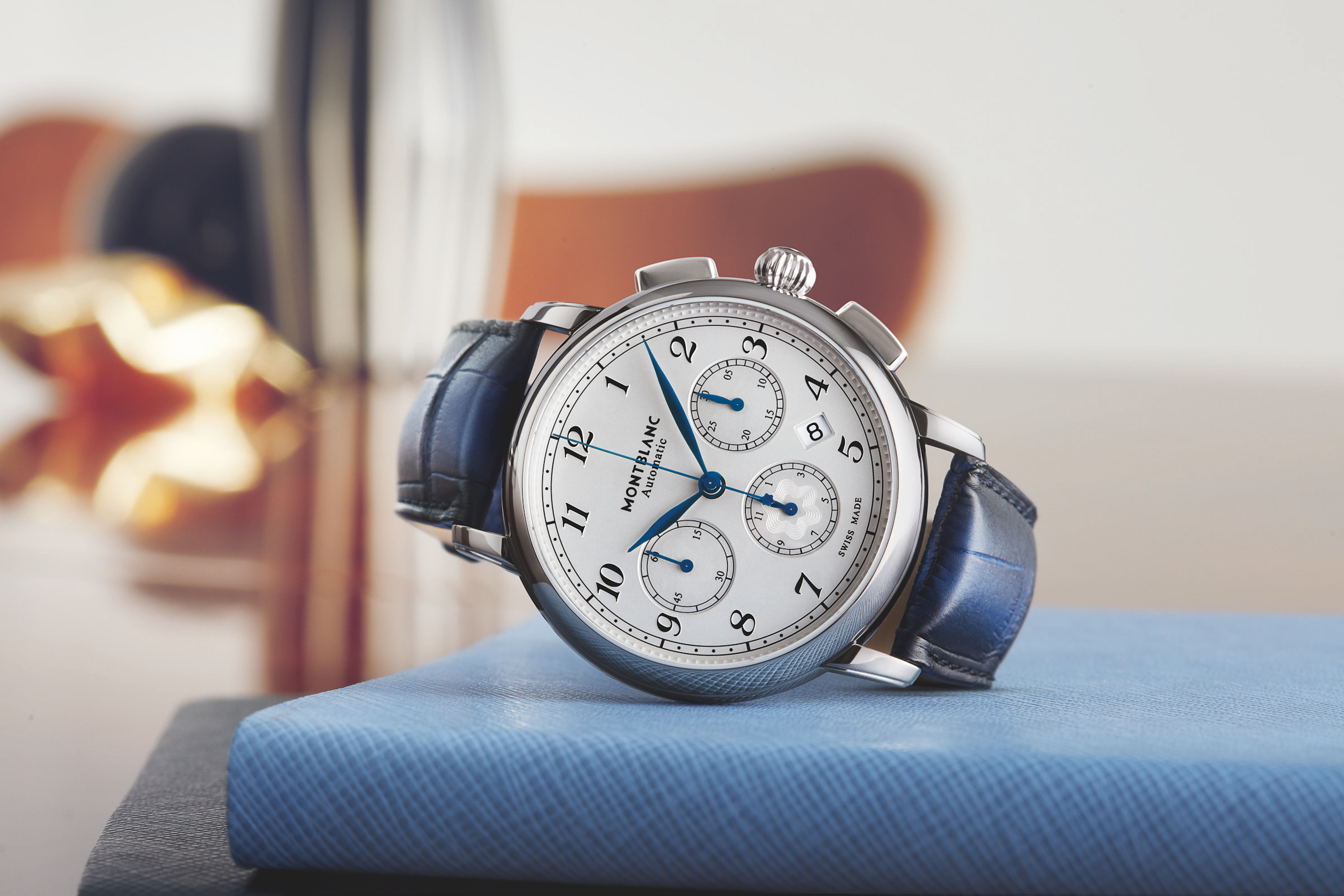 The Montblanc Star Legacy collection is inspired by old Minerva pocket watches, like the Gold Hunter Calibre 19, and features borrowed elements like the vintage onion-shaped crown and pebble-like case. Other Minerva-inspired features can be seen in the Montblanc Star Legacy Automatic Chronograph, such as original Arabic numerals now streamlined for a modern finish, and the railway minute track on the outer corner of the silvery white dial that is now dotted rather than lined. The three register chronograph watch, also offered with a slate-grey dial, features a peculiarly positioned date aperture between 4 and 5 o’clock, and a guilloché patterned Montblanc emblem at 6 o’clock. Driving this watch is the calibre MB 25.02, an automatic movement that operates at 28,800 oscillations per hour.

Similarly, the Montblanc Star Legacy Full Calendar takes after the historic pocket watches, showing off the same dotted railway minute track and re-imagined Arabic numerals. What’s more, the hours, minutes, seconds, day, date, month and moon phase are spaced out in a beautifully simplified aesthetic for a user-friendly experience. The tip of the date hand is a red crescent, sweeping along 31 digits. It encircles the day and month apertures at 12 o’clock, and the moon phase display at 6 o’clock — the latter adorned with a romantic starry blue sky. Powering this is a self-winding calibre MB 29.12. Like the Automatic Chronograph, the Full Calendar is fitted with an alligator leather strap from the Montblanc Pelletteria in Florence, and decorated with a stunning Sfumato finish.

SEE ALSO: You Can Now Rent Your Watch At A Fraction Of Its Cost

In true commemorative fashion, the new Star Legacy collection offers two special editions. The patented Suspended Exo Tourbillon, limited to 58 pieces, pays tribute to the founding year of Minerva in 1858, while a Nicolas Rieussec Chronograph updates the namesake monopusher chronograph from 2008. On the Suspended Exo Tourbillon, time is indicated through an off-centred subdial at 12 o’clock, while the spotlight shines on the one-minute tourbillon regulator at 6 o’clock. Just outside of the tourbillon’s rotating cage lies a massive 14.5mm balance wheel, suspended 3.2mm above the dial with the help of a tourbillon bridge with a single steel arm to create the illusion that it is floating. This special edition is fitted with a manual-winding Calibre MB M16.68, developed entirely in-house and cased in polished 18K red gold. It bears 54 baguette diamonds for a total of 2.35ct, and is limited to only 28 pieces.

The Star Legacy Nicolas Rieussec Chronograph, on the other hand, is an unusual monopusher chronograph named after the French watchmaker credited with developing the first marketed chronograph in 1821. Instead of conventional registers with sweeping hands, the 60-second and 30-minute discs rotate below a blue fixed double index — a feature also seen on previous editions. This aesthetic update bears a guilloché patterned dial around the two registers and the off-centred time display. Driving this piece is the automatic Calibre MB R200, which is visible from the sapphire case back.

Rounding out the new collection is the Star Legacy Automatic Date, a classic beauty that offers time in its purest form, with an additional date window at 6 o’clock. Like other models in the collection, it also shows off Minerva-inspired Arabic numerals and the dotted railway minute track, along with an exploding star guilloché patterned dial. Available in 39mm or 42mm, it is offered in stainless steel, steel and gold, or 18K gold variants. At its heart is the automatic Calibre MB 24.01, which has a power reserve of 42 hours and a frequency of 28,800 oscillations per hour.