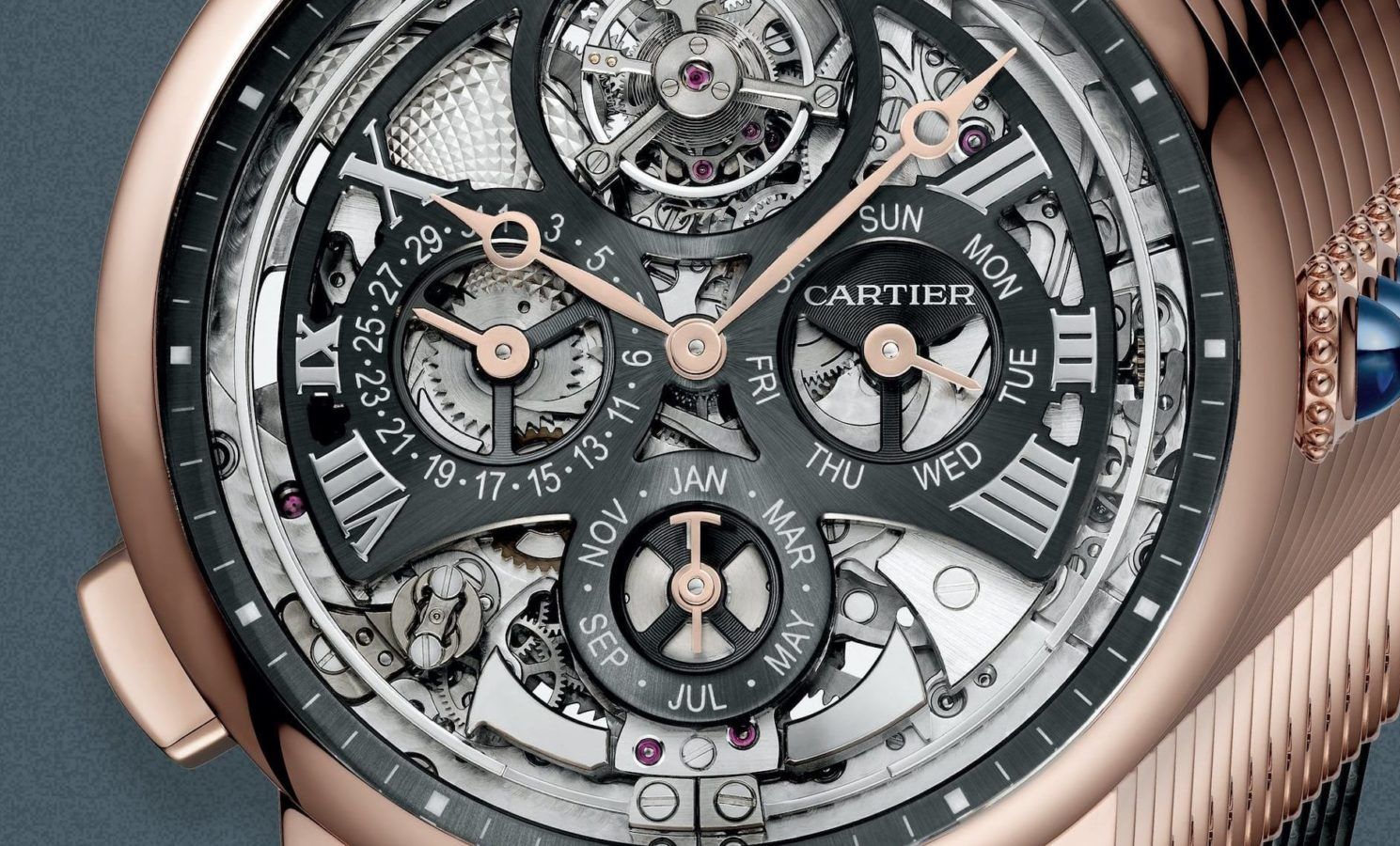 What is the most fitting watch to begin the new year with? The pinnacle of haute horlogerie — the Minute Repeater. Here are our picks: 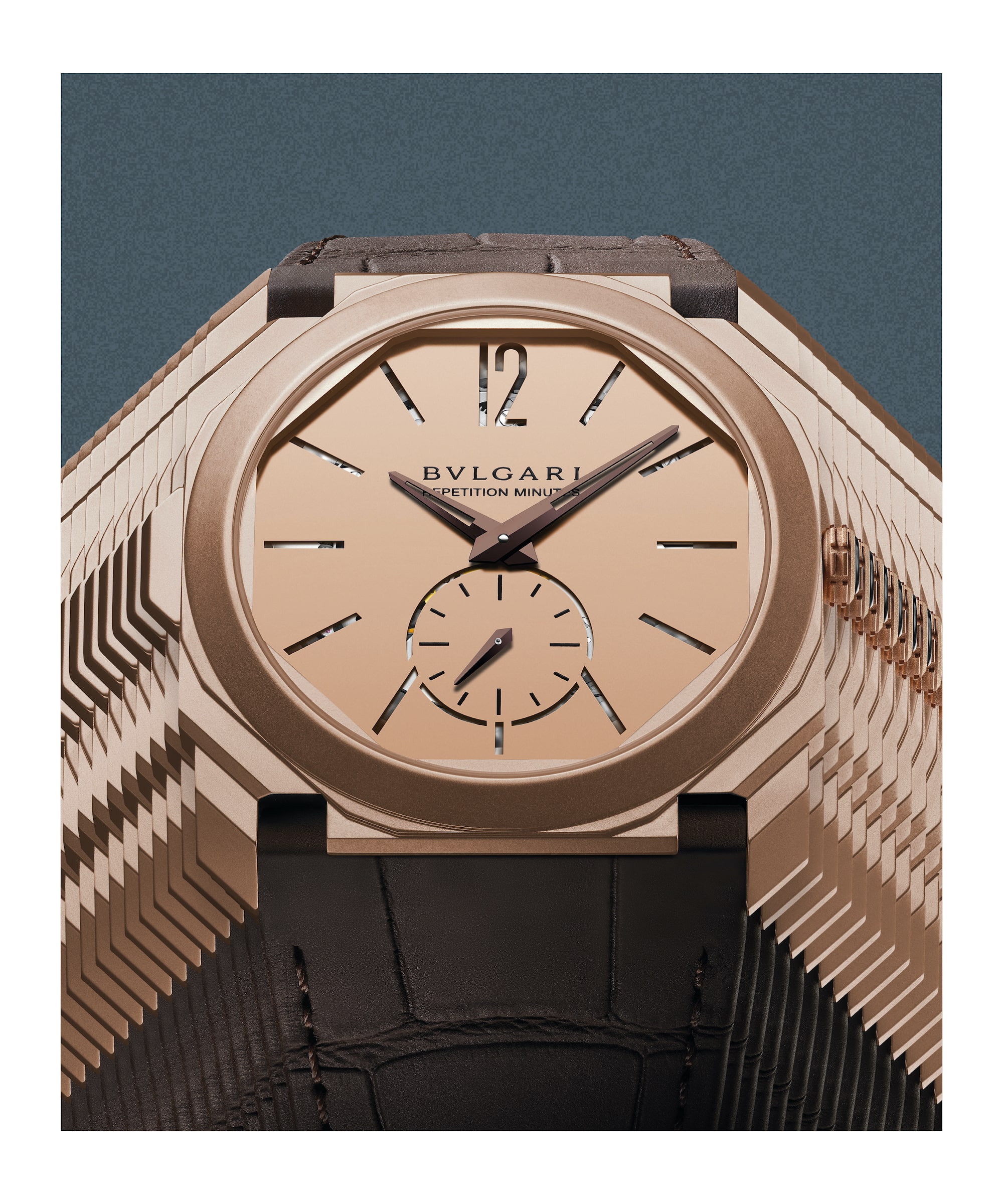 The titanium Octo Finissimo Minute Repeater by Bulgari that debuted in 2016 set the record for the world’s thinnest minute repeater in production at the time. The technically advanced model signalled a shift in slimness and classic watchmaking aesthetics, while setting the benchmark for a new approach to mechanics and traditional high complications. A highlight at last year’s LVMH Watch Week in Dubai, this 40mm sandblasted rose gold variant – with a remarkable thinness of just 6.9mm – is an impeccable feat of technical prowess. The dial’s hour markers and small seconds counter at 6 o’clock feature a cut-out design: The openings serve to amplify resonance inside the case and optimise sound effect. Measuring an ultra-thin 3.12mm, the mechanical manufacture movement BVL 362 boasts a 42-hour power reserve when fully wound. 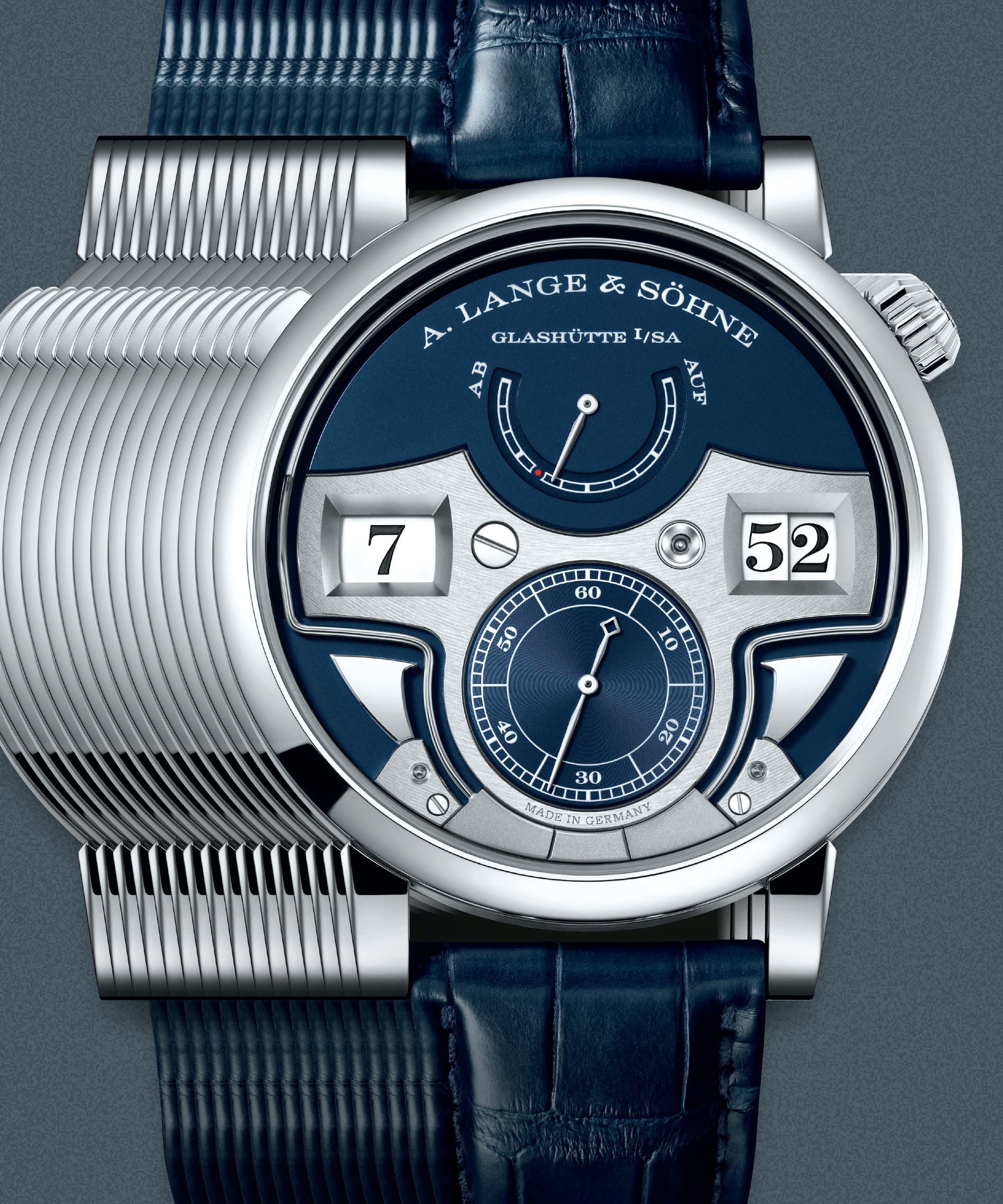 First launched in 2015, the A. Lange & Söhne Zeitwerk Minute Repeater is the world’s only watch that combines a mechanical jumping numerals display with a decimal minute repeater. Initially available only in platinum, the technically complex 44.2mm timepiece is now offered in white gold with a striking deep blue dial as a limited 30-piece edition. In contrast to a conventional minute repeater that chimes in blocks of 15 minutes, this masterpiece is a decimal repeater, which means its chimes match the time as it’s displayed: hours, tens of minutes and single minutes. The white gold case delivers a reverberant and warm sound, while the gongs generate pure, resonant tones in perfect harmony. The manufacture calibre L043.5, composed of an impressive 771 parts, powers the timepiece. 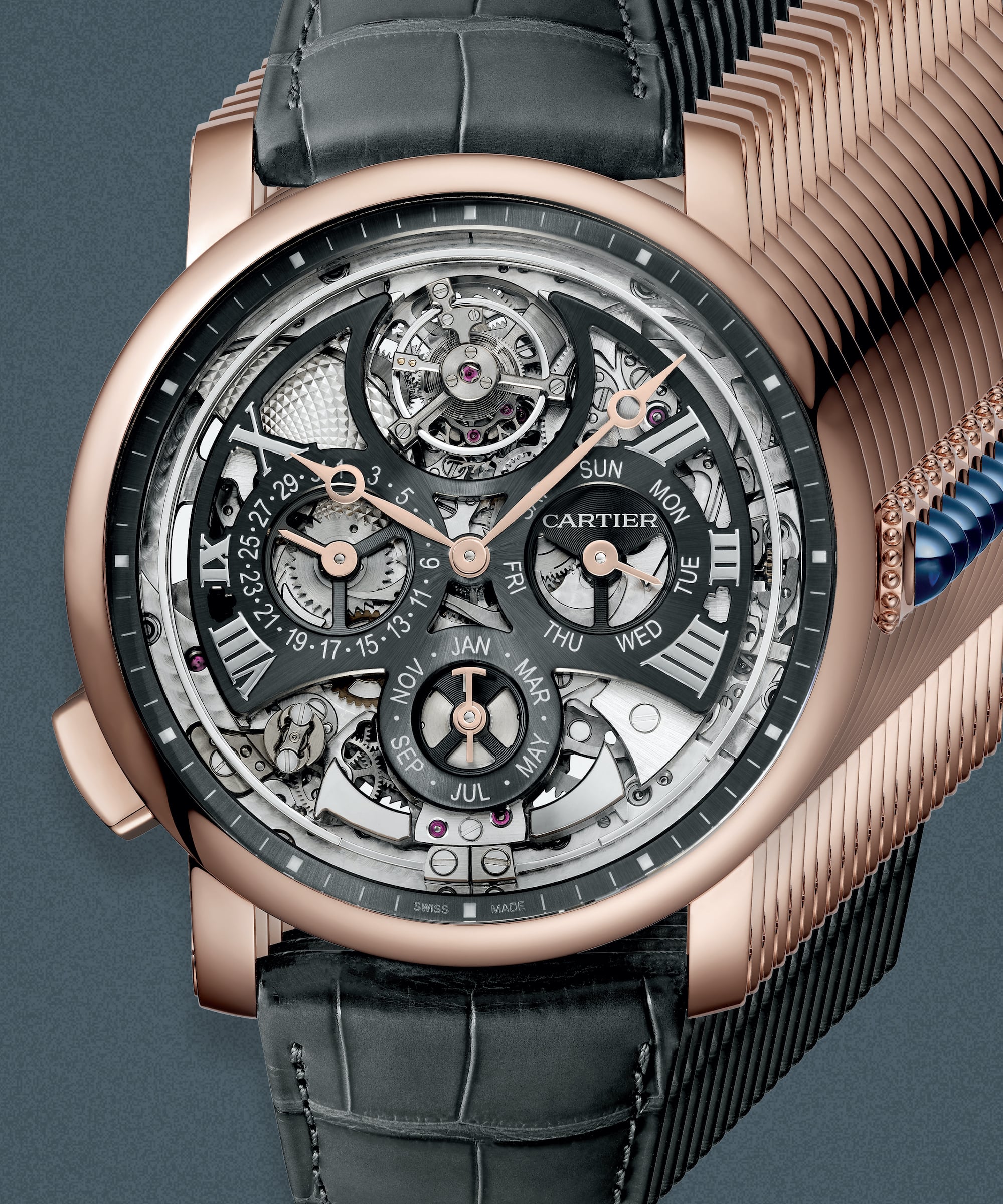 The visually arresting Rotonde de Cartier Grande Complication Skeleton in pink gold is a spectacular showcase of Cartier’s technical savoir faire in the world of haute horlogerie. Introduced in 2015 in platinum, this new 45mm reference from the maison’s Fine Watchmaking Collection showcases a skeletonised dial that reveals the fascinating movement. Laid out clearly above mechanical components are the tourbillon at 12 o’clock, minute repeater hammers at 6 o’clock, as well as the perpetual calendar indication. Equipped with the self-winding calibre 9406 MC offering a 50-hour power reserve, the Poinçon de Genève-certified timepiece is the most complicated watch produced by Cartier. 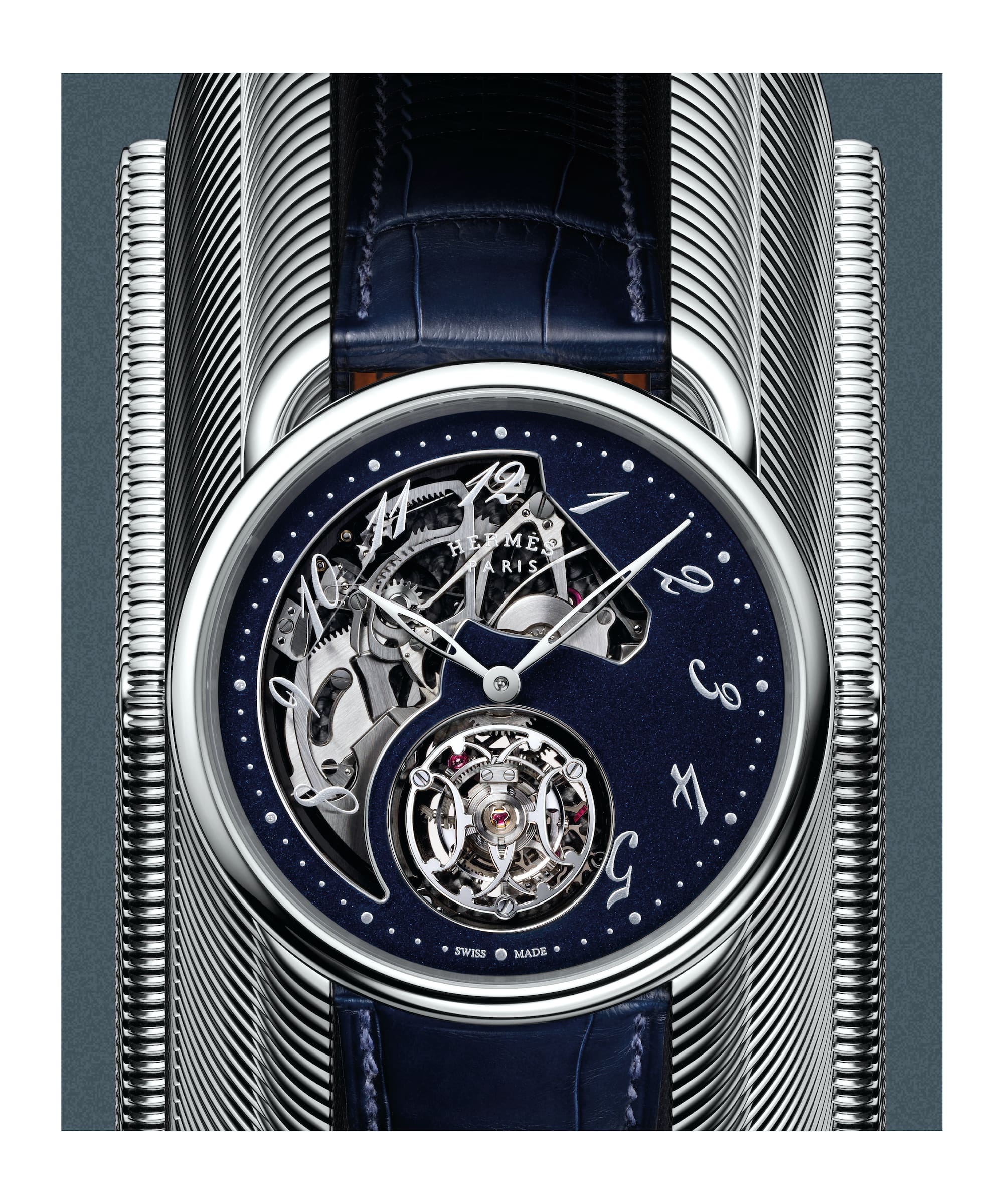 Taking centre stage on this 43mm Arceau Lift Tourbillon Répétition Minutes watch is a cut-out equestrian profile, which reveals the captivating complexity and beauty of the double-gong minute-repeater mechanism. This is combined with another cherished complication – the flying tourbillon – visible through a round aperture at 6 o’clock on an Abyss blue-lacquered dial. Redesigned to incorporate two major haute horlogerie complications, the one-of-a-kind white gold timepiece houses the new mechanical hand-wound manufacture movement H1924, which delights the senses with its clear chiming. 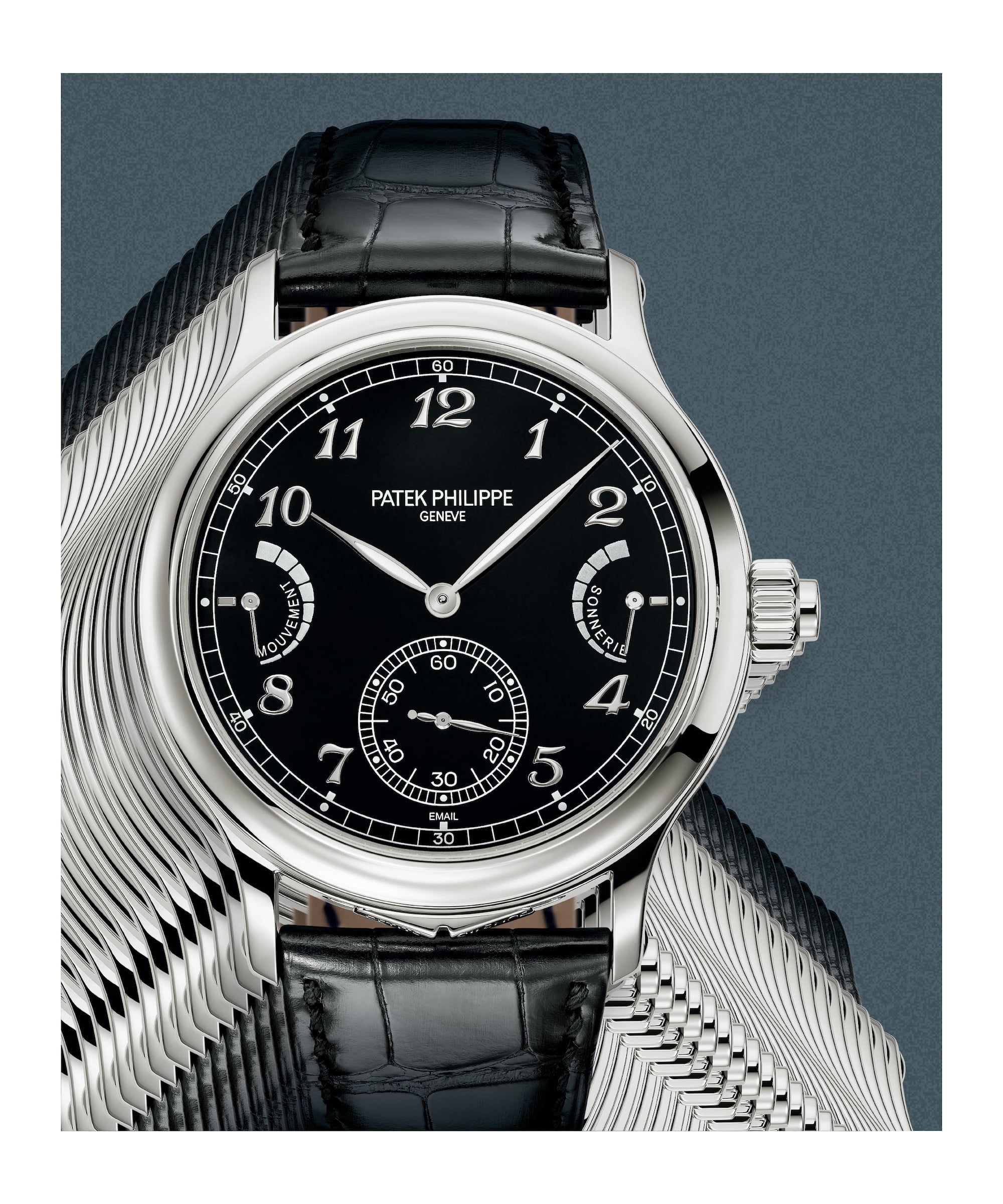 Fascinating the most discerning collectors is the manufacture’s latest addition, Ref. 6301P Grande Sonnerie, which features a highly coveted and elaborate sound function. A grand complication that is rare for a wristwatch, this is Patek Philippe’s first timepiece that presents the grande sonnerie with a petite sonnerie, minute repeater and patented jumping subsidiary seconds. Showcasing a dial swathed in sharp black grand feu enamel with a glacé finish, applied Breguet numerals, and leaf-shaped hands in luminescent white gold, this platinum watch is endowed with the newly-developed 703-part calibre GS 36-750 PS IRM, boasting a power reserve of 72 hours for the movement and 24 hours for the strikework. 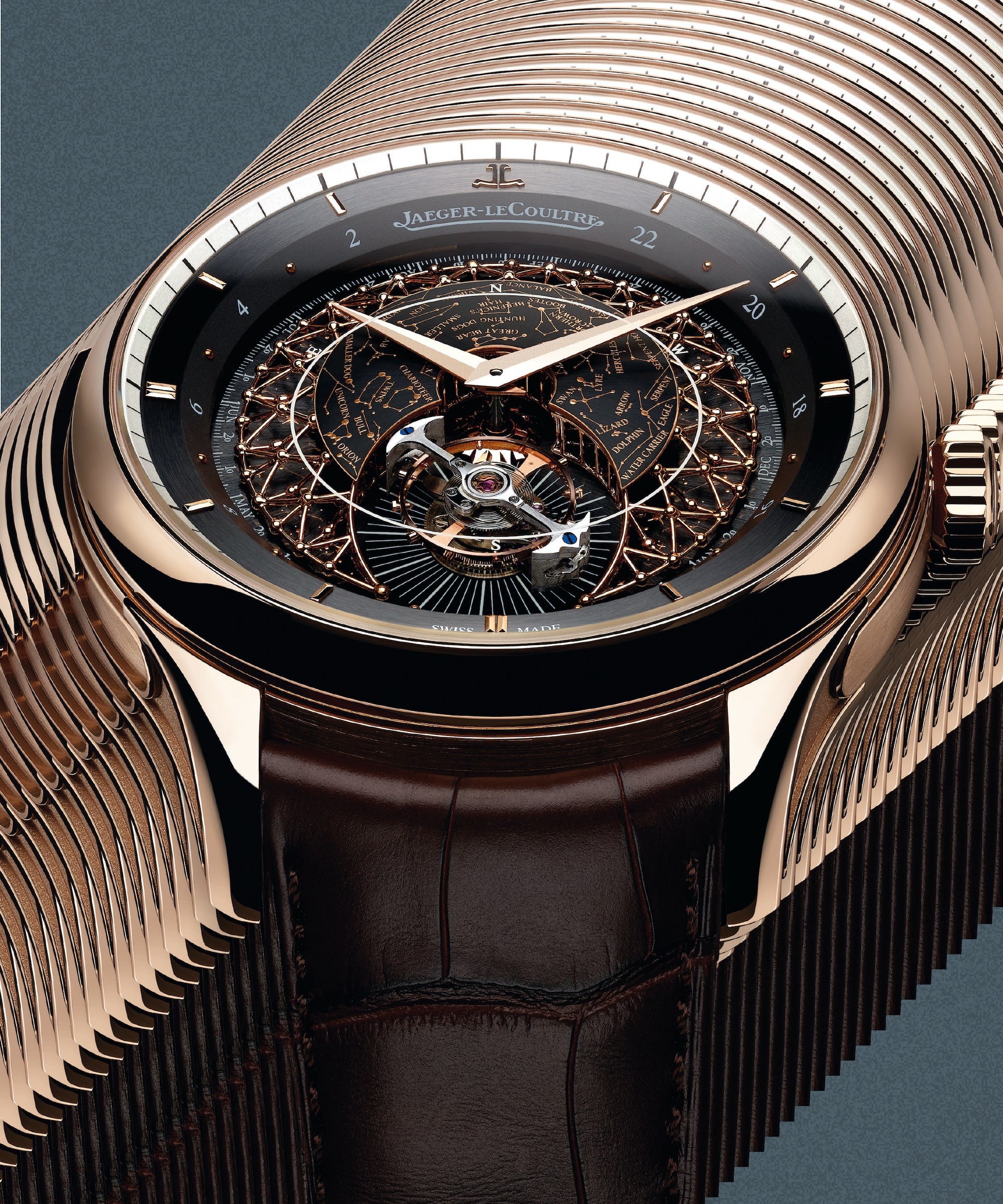 Chiming watches have had a major presence in the brand, which has made over 200 calibres. including some 100 minute repeaters before the year 1900. A testament to its expertise in complicated timepieces, the maison reinterprets the Master Grande Tradition Grande Complication with this magnificent 45mm creation. The showpiece incorporates three technically challenging complications in horology – a minute repeater, star chart and orbital flying tourbillon. The house’s patented crystal gongs (introduced in 2005) are soldered directly to the sapphire crystal, which acts as an excellent amplifier. In 2009, the maison added articulated trebuchet hammers to greatly improve the speed and force of the hammer strike for a fuller sound. Lending artistry to this marriage of complications is a multi-level dial featuring filigree work that enhances the celestial theme. Driven by the manual mechanical movement, Jaeger-LeCoultre Calibre 945, the timepiece is offered in two versions – pink gold (pictured), and white gold with a baguette diamond-set bezel.