From Seiko to Omega, these are the Best James Bond Watches ever Made 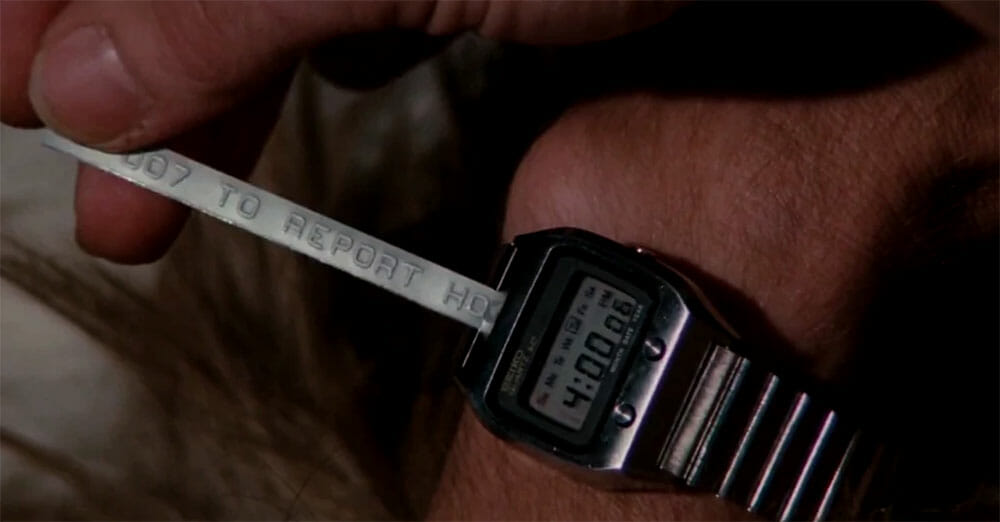 Style
From Seiko to Omega, these are the Best James Bond Watches ever Made
Share
Next article

James Bond’s watches are as timeless as the classic film franchise.

Ever since the first James Bond film, Dr. No, which was released in 1962, Bond has been a top star for horologists and has sported unique wristwatches over the years.

Each are a fine piece of design too, and some of them, such as those by Seiko, revolutionised the market with their advanced technology.

Of course, the James Bond’s watches could do more than telling the time, and while the ones on the market are far less lethal (no laser beams for us just yet!), the watches that Bond sported were just as charismatic as the man himself.

Below, we look at some of the best of James Bond watches that ever made the big screen.

A spy needs his gadgets and one disguising as a simple watch is a bonus. This is where the Breitling Top Time chronograph in Thunderball comes in.

The Breitling Top Time is shown in the film as having undergone a modification at the hands of Q and, therefore, was the first modified James Bond watch. Bond used it as a Geiger counter — a device used to measure radiation — in the film.

The watch that Connery wore was different in appearance from an original Breitling Top Time because of the modification, done by the Valley Tool Company exclusively for the film. That watch, which had a widened bezel around its black dial, was discovered in 2013 by horology enthusiasts for around US$38 (approx. THB 1,283). Being the only piece of its kind, its price went up to around US$160,175 (approx. THB 5,406,547) at a Christie’s auction in London the same year.

Launched in the 1960s, Top Time had a stainless steel case with a metal tachymeter ring and two metal subdials. Even women found the sports watch attractive and became loyal customers, thus expanding and popularising the legacy of Top Time.

In 2020, Breitling released a limited-edition Top Time inspired by the 1960s design with modern technical specifications. It has a 41mm stainless-steel case and pin buckle, a COSC-certified Breitling Caliber 23 chronograph movement and a power reserve of approximately 48 hours. Only 2,000 pieces of the watch were produced.

In Live and Let Die, Roger Moore’s Bond is seen wearing the Hamilton Pulsar P2 2900 for a few minutes after the title sequence, which was extra unforgettable thanks to the titular theme song by former Beatles’ member Paul McCartney and his band Wings.

The Hamilton Pulsar P2 2900 is widely known as the world’s first true digital watch. Launched in 1972, it had an LED screen that only showed the time. A magnet fitted into the watch had to be removed to set the time.

Despite its limitations and lack of any other function, the Pulsar was a technological leap in watch design. Other prominent celebrities who owned it were Elton John, Joe Frazier, Keith Richards, and Jack Nicholson.

In 2020, Hamilton Watch Company launched the Hamilton PSR, which saw a design based on the Pulsar. The 100-metre water-resistant watch had an LCD & OLED hybrid display set within a 40.8×34.7mm stainless steel case. There is a limited edition PSR, too, which sees its casing and bracelet rendered in a yellow gold PVD coating.

In the highest-rated James Bond film The Spy Who Loved Me, Roger Moore was seen wearing a Seiko 0674 LC that doubled up as a printer. Of course, fans loved the quirky bit of gadgetry by Q.

In the film, Bond could receive communication from the MI6 headquarters through the watch, which printed the messages on what looked like a ticker tape. Bond wore the watch throughout the film.

Minus the tinkering by Q, the Seiko 0674 LC was a multi-functional digital quartz watch — the kind which became a trend worldwide in the following decade.

In Moonraker, Bond has to not just safeguard the interests of his country but the entire world from the nefarious designs of a dangerous industrialist who has plans to wipe out most of the human population.

This meant that Bond needed some serious firepower and that arrived via a Seiko M354 Memory Bank Calendar wristwatch. In the film, Bond was able to blast his way out to save his life using a concealed explosive charge in the watch.

The Seiko M354 Memory Bank Calendar was released in 1978 for around US$250 (approx. THB 8,439) at the time. It was named so because it had a calendar that started from January 1930 and ended in December 2009. Users could set reminders, which made it unique then because of its ability to retain information. This is also why many called it the first smartwatch.

This watch was released in 1982, a year before the release of Octopussy, and Seiko launched a special commercial to advertise this watch and its 007 connection. In 1984, the Guinness Book of World Records recognised it as the “smallest TV set in the world”.

The watch was truly unique for its time. It had two screens, one large and one small. While the small one was used to display time and other related features, users could also access over-the-air broadcast television on the larger screen. The TV display screen had a 1.2-inch LCD display, and images were aired in greyscale.

A major difference between the film version and the real watch was that the latter came with a cassette walkman-size receiver and headphones for it to access the television. A cord was needed to connect the receiver to the top part of the watch. It was only then that the wearer could watch TV.

Despite its outstanding advancement in tech, the watch was not a success. This may be due to the hassle of having to carry other accessories with the watch. Besides, the screen was not particularly great in rendering images.

Despite its failure, it was spotted on screen once again when Tom Hanks wore it in Dragnet (1987).

The Living Daylights marked the debut of Timothy Dalton as James Bond and the departure of Seiko from the Bond franchise. TAG Heuer took over Seiko in this film, and it would be the only time the watch company would be a part of Bond films.

Dalton, who brought a more serious Bond on screen, sported a 38mm TAG Heuer Professional Night-Dive reference 980.031. He was seen wearing it while struggling with an adversary, and film enthusiasts spent years of research trying to confirm that it was indeed this particular watch model, given that there was no official watch sponsor of The Living Daylights.

The luxury timepiece seen in the film had a luminous dial — the first time Bond wore such a watch. In September 2021, it was reported that TAG Heuer released a modern version of the 1980’s watch ahead of the release of No Time to Die. This watch, the Aquaracer Professional 300 Night Diver, sported a 43mm stainless steel case that was coated in black DLC.

Its dial is treated with Super-LumiNova that enabled it to glow in the dark. There is a date dial at the 6 o’clock position under a magnifying glass. The rotating bezel is 12-sided and made in black ceramic. The strap, made from rubber, was a big departure from the metal strap that the original version had.

GoldenEye marked the debut of both Pierce Brosnan as James Bond and Omega watches as the official watch of the fictional spy.

The quartz version of the watch that Bond wore in the film had a blue dial and bezel that was set in a stainless steel case and bracelet. Like other Bond watches in film, the Omega Seamaster Professional 300M saw modifications by Q, namely a remote detonator and a laser beam.

The watch was originally produced in 1993 and has since become one of the world’s most famous watches, thanks to its incredible design and association with Bond. The 300M has a date calendar at the 3 o’clock position.

According to Omega, the Diver is designed for military use. Its brown dial and bezel ring are made from aluminium, and both the bracelet and case crafted from Grade 2 titanium. This means that the watch is both sturdy and lightweight.

The watch can be worn in deep pressure conditions, such as underwater missions. To ensure that wearers don’t face problems with the watch during these occasions, Omega fitted the Seamaster Diver 300M 007 Edition with a helium escape valve decompression system.

Omega says that magnetic fields of up to 1.5 tesla (15,000 gauss) won’t affect the watch, which is powered by Omega’s Co-Axial Master Chronometer 8806.