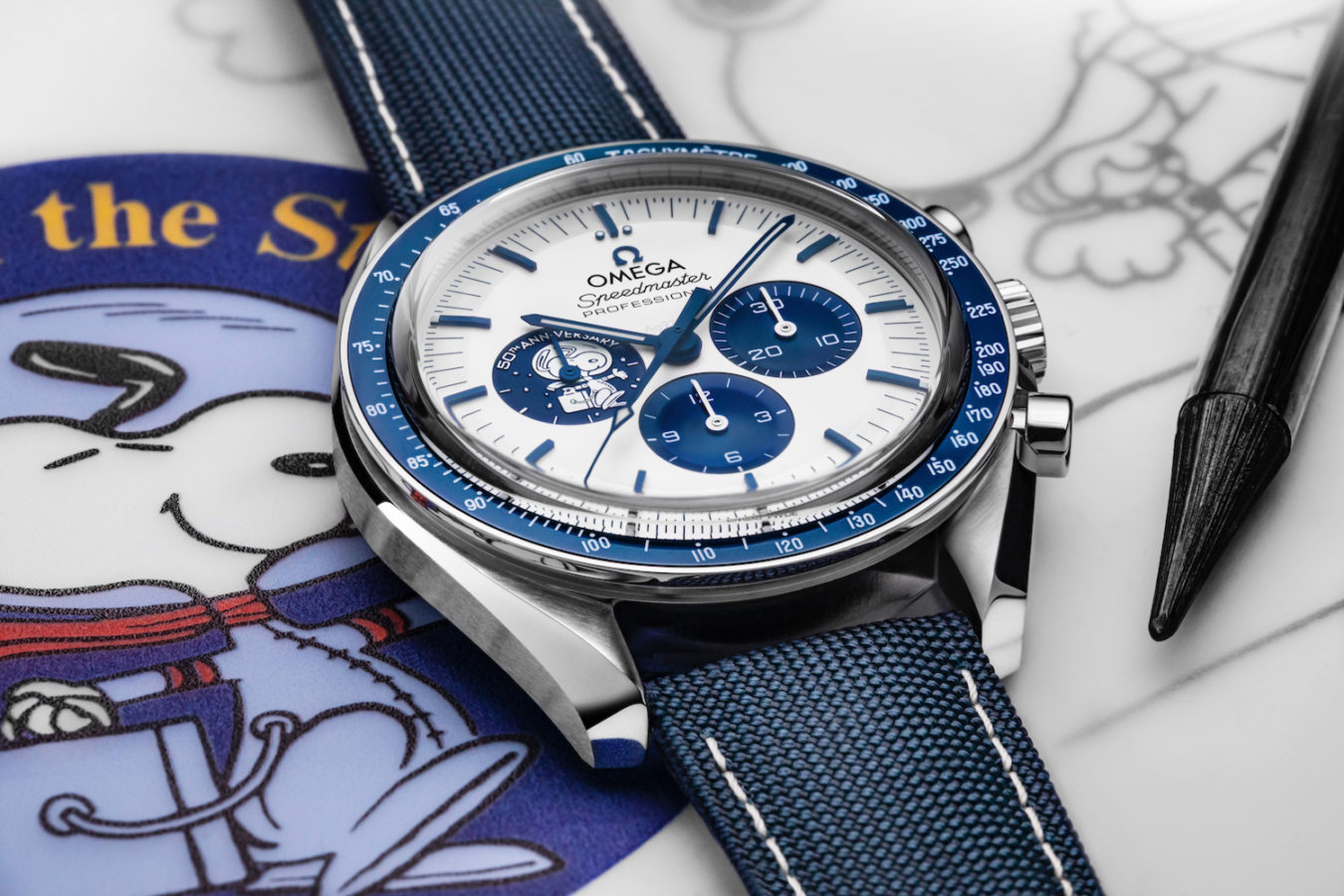 To honour its achievement for its pivotal role aboard the Apollo 13 mission, NASA bestowed on OMEGA the “Silver Snoopy Award”. This year, the Swiss watchmaker releases a limited edition Speedmaster commemorating the 50th anniversary of this historical legacy.

The story of the ill-fated Apollo 13 lunar mission is one that still, to this day, continues to enthrall the general public. In 1995, director Ron Howard released the critically acclaimed docudrama Apollo 13, starring Tom Hanks, Kevin Bacon, and Bill Paxton, commemorating what was then the 25th anniversary of this legendary space flight – which came within a hair’s breadth of ending in utter catastrophe.

This year, to mark the five decades that have elapsed since Apollo 13’s safe return to earth, OMEGA has released the Speedmaster “Silver Snoopy Award” 50th Anniversary watch, which commemorates not only the link between the National Aeronautics and Space Administration (NASA) and a loveable cartoon beagle, but also the intrinsic and vitally important role that an OMEGA Speedmaster played in getting three astronauts safely back to earth. 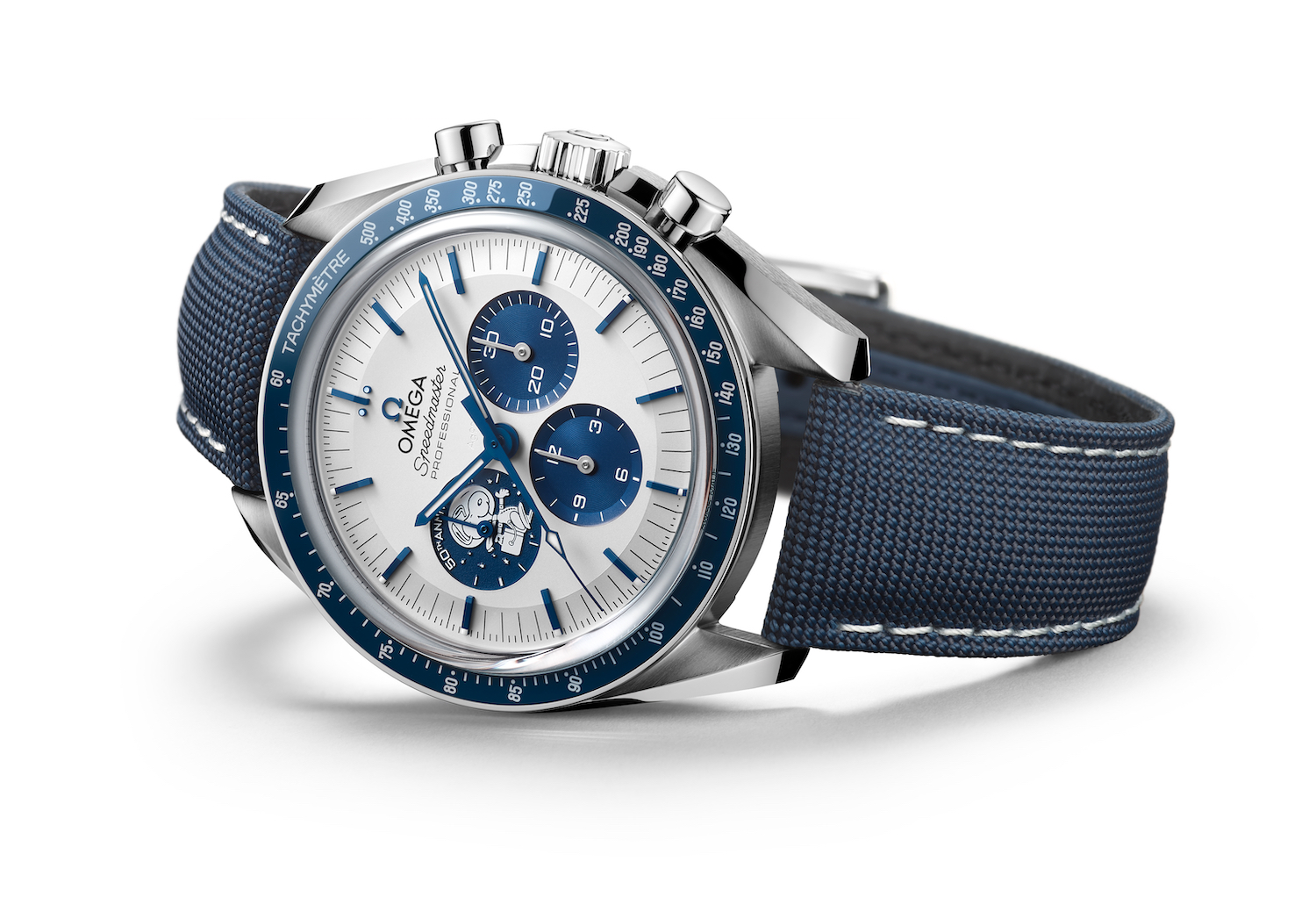 Since the special connection between Snoopy and NASA predates even the first moon landing, it’s worth retracing that unique partnership first. It was in the 1960s when cartoonist Charles M. Schulz – the man responsible for creating the long-running Peanuts comic strip – first began depicting Charlie Brown’s lovable dog Snoopy as an amateur astronaut intent on being the “first beagle on the moon”. These cartoons were perfectly in sync with the public’s excitement about America’s adventures into the cosmos, and it wasn’t long before Snoopy became established as a symbol of space exploration.

In 1968, when NASA went in search of a mascot for its safety programme, Snoopy was the obvious choice. Not only would the irascible pup act as a safety “watchdog”, but his fearless attitude reflected the optimism for mission success, while his amusing antics would serve to keep things light in serious situations.

In May of 1969, NASA launched Apollo 10, the fourth manned mission in the USA’s Apollo program, and the second to orbit the moon. It was described as a “dress rehearsal” for the first moon landing – which would happen a few months later – and it required the lunar module to skim within 50,000 feet of the moon’s surface and “snoop around”, searching for the best possible landing site for Apollo 11. Not surprisingly, the crew of the Apollo 10 named the lunar module ‘Snoopy’.

During this remarkable period, Snoopy had become so beloved by NASA’s own astronauts, that they created the Silver Snoopy Award, a very prestigious accolade that was designed by Charles M. Schulz himself, depicting the boisterous beagle in a spacesuit wearing his famous Flying Ace scarf. Recipients of this coveted award have it presented to them by the astronauts themselves, and it is only given to people or companies whom the flight crews believe have contributed significantly to “the success of human space flight missions”. To be personally recognised by astronauts in this way is quite a rarity, but in 1970 this illustrious honour was bestowed upon OMEGA, which in turn created a permanent bond between the Swiss watchmaker and the humourous hound.

OMEGA’s own history with NASA dates back to 1965 when their Speedmaster was declared, “flight qualified for all manned space missions”. The chronograph was subsequently trusted by all NASA’s astronauts, and Neil Armstrong made it the first watch worn on the moon in July of 1969. But it was the Apollo 13 mission, almost one year later, which best underscores how the watch’s incredible precision played a key role in saving the lives of three brave spacemen.

A mere two days after the April 11th launch of Apollo 13 an oxygen tank exploded on board, forcing the crew to quickly move into the lunar module. However, this smaller craft was not built to support three people for such a long duration, so to conserve energy the astronauts shut down nearly all power – which in turn rendered all their digital timers essentially useless.

The lives of the three astronauts was in peril, but NASA was working around the clock to find a solution to the increasingly volatile situation. Because the mission had drifted off its charted course, the fear was that the module would re-enter the earth’s atmosphere at the wrong angle and bounce back into space, leaving no chance of further recovery. It was then decided that the crew would manually readjust the course of the craft, which was going to be an extremely tricky manoeuvre.

“When the spacecraft clocks stopped, that’s when we required the Speedmaster,” recalls Apollo 13 Commander James Lovell. “Without our normal navigation equipment, we had to view the earth and use it as a guideline. Then we had to burn the engine for 14 seconds and turn it off, so we used the watch that Jack Swigert wore.” Miraculously, things worked perfectly, and on April 17th, 1970 – 142 hours and 54 minutes after its launch – Apollo 13 fell safely back to earth, splashing down in the South Pacific Ocean.

In recognition of the watchmaker’s invaluable contribution to this remarkable decade of space exploration – culminating with the unforgettable Apollo 13 mission – OMEGA was awarded the Silver Snoopy Award on Monday, October 5th, 1970. Astronaut Thomas P. Stafford, Commander of Apollo 10, presented the unique 925 sterling silver pin, which was presented along with a Manned Flight Awareness certificate signed by the crew of Apollo 13, including James Lovell, Jack Swigert and Fred Haise.

“I remember presenting the Snoopy award to Dr. Widmer from OMEGA at a little ceremony in my office,” Thomas Stafford adds. “I thanked him and OMEGA watches for the wonderful service they’d given us throughout the space programme, but particularly on Apollo 13, because the Speedmaster was so critical in helping us get safely back to the earth.”

From that moment onwards, the cartoon canine and the renowned Swiss watchmaker were forever linked, and that special relationship is once again celebrated with the introduction of the Speedmaster “Silver Snoopy Award” 50th Anniversary timepiece. As would be expected, the brave beagle plays a prominent role when it comes to the design of the timepiece, first appearing on the blue sub-dial at 9 o’clock wearing his famous spacesuit, in the exact style of the silver pin that NASA astronauts give to award recipients.

The dial itself, which includes two more blue subdials and blue PVD angle-shaped hour markers and hands, is silver and laser-engraved with Ag925. Even the watch’s blue nylon fabric strap shows incredible attention to detail, as it matches the other blue elements of the watch and also features the trajectory of the Apollo 13 mission embossed on the lining. Meanwhile, the 42 mm stainless steel case is inspired by the 4th generation Speedmaster style – the infamous first watch ever worn on the moon – and the tachymeter scale, with the iconic “Dot over Ninety”, is shown in white enamel on a blue ceramic [ZrO2] bezel ring.

The comical caseback is also cleverly designed, with Snoopy in orbit, sitting in his Command and Service Module (CSM) suspended on a “magical hand”. When the chronograph seconds hand is in use, Snoopy takes a trip around the mysterious far side of the moon – just like the Apollo 13 crew – and the lunar surface is decorated on the sapphire crystal using a unique micro-structured metallisation. In the distance, the earth disc rotates once per minute, in sync with the watch’s small seconds hand, while the iconic quote ‘Eyes on the Stars’ stands out against the inky black expanse of space. The Naiad Lock keeps all the caseback engravings in the correct, upright position, including the date in 1970 that OMEGA received their Silver Snoopy.

Adding a dash of 21st century ingenuity into this commemorative timepiece, the Speedmaster “Silver Snoopy Award” 50th Anniversary watch is driven by the OMEGA co-axial master chronometer Calibre 3861 – a ground-breaking movement has taken the legendary Moonwatch calibre to new standards of excellence, with anti-magnetic innovation, as well as master chronometer certification from the Swiss Federal Institute of Metrology (METAS). Collectors will also receive a microfibre cleaning cloth, an Apollo 13 presentation box, and a special magnifying glass for inspecting all the watch’s dazzling details.

“Snoopy was real a cartoon favourite, who kept showing up in the comic strips wearing a spacesuit,” James Lovell says when asked about his memories of Snoopy and NASA during that time. “I think the astronauts adopted him because he just did everything right.”

“OMEGA was just an integral part of our total effort in space,” adds Thomas Stafford. “When you’re in space, your baseline is time. Everything is based on time. We loved the professional Speedmaster. It worked well and never failed. It was always just there, ready to go.”

For horology aficionados and fans of space travel alike, this master chronometer is a must-have, as it celebrates both the legendary accomplishments of NASA’s skilled astronauts and the light-hearted antics of the world’s most beloved beagle.

Find out more at the following OMEGA Boutiques:

Sign up to get the latest luxury and lifestyle news delivered to your inbox.
watches omega omega speedmaster Limited edition watches
Bruce Scott