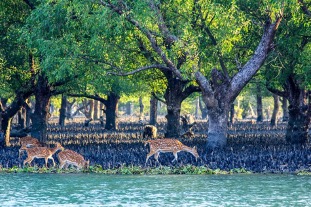 Lush greenery, calm waters, and a tranquility punctuated with the calls of wildlife reverberating through the trees — there aren’t many places as idyllic and enchanting as a mangrove.

While forests formed of mangroves — trees that grow in coastal waters — make for beautiful landscapes, they are also essential in protecting coastal areas from erosion and mitigating threats of climate change. These forests can store as much as four times more carbon than any other type of tropical forest.

They also provide a habitat for a variety of flora and fauna, including some critically endangered species. With almost 46 percent of the world’s share of mangroves spread through South Asia, Southeast Asia and Asia-Pacific, we take you through some of the forests open to visitors where you can witness the wonders of nature.

The Sundarbans are home to some of the rarest and threatened animal species such as the saltwater crocodile, the Gangetic dolphin and the olive ridley turtle. However, the most famous residents here are the royal Bengal tigers – it is the only mangrove forest in the world where tigers can be found.

A famous point to catch a glimpse of these Big Cats on the Indian side is the Sudhanyakhali watch tower. Across the border, the Katka observation tower and the Harbaria and Karamjal crocodile breeding centres are worth a visit.

According to UNESCO, the country has 1,057 square kilometres of mangroves in the Greater Mekong region, of which Thailand, Cambodia and Myanmar are also a part. Of this, the largest block of 750 square kilometres lies to the southeast of Ho Chi Minh City as part of the Cần Giờ Mangrove Biosphere Reserve.

Fed by the waters of Saigon and Đồng Nai rivers, the Reserve is called the city’s “green lungs.” This unique ecosystem also includes habitats such as mud flats, wetlands and salt marshes. Among the major flora and fauna thriving here are Rhizophora apiculata mangrove plants, saltwater crocodile, spot-billed pelican and the king cobra.

Located on the southern tip of the country, the UNESCO-designated biosphere reserve was once dense with mangroves. But the weapons used during the Second Indochina War destroyed much of it. However, there has been a gradual rise in the mangrove cover due to natural reclamation of mudflats and abandoned ponds meant for aquaculture.

Tourists can take a boat ride to explore the area and even spend a night at a homestay in the middle of the park. The nearby commune is a great place to try local dishes, mostly comprising seafood

Spread across 500 square kilometers, Meinmahla Kyun Wildlife Sanctuary is located on the south of the Irrawaddy Delta. One of the ASEAN Heritage Parks, this Sanctuary is also a Ramsar site, which means it is internationally significant for conservation and sustainable use of wetlands.

From November to February, the eco-system comes alive with the calls of migratory birds who take the East Asian–Australasian Flyway. Around the same time, chances of spotting the endangered Irrawaddy dolphins are high. This is also the only place in Myanmar to spot the saltwater crocodile.

Among the many endangered and vulnerable species supported by the sanctuary are the hawksbill turtle, Great knot, Nordmann’s greenshank and Pacific ridley turtle.

At least half of all the known 65 mangrove species of the world can be found in Philippines. Though natural disturbances have resulted in a loss of mangroves, serious efforts are being made to reverse the decline, and one notable example is the Bakhawan Eco-Park.

Located in Aklan province’s Kalibo, its creation began in the late 1980s when the local government, NGOs and the community came together to transform a mudflat into a mangrove forest. In 30 years, the effort resulted in the park which is today spread across 2.2 square kilometres.

The visitors can take a kilometre-long bamboo boardwalk which passes through the forest and ends at a platform — where one can enjoy views of the Kalibo river meeting the Sibuyan Sea.

A protected area, Bongsanglay was elevated to the status of a natural park in 2000. Spread across 5.18 square kilometres in Bicol region, it is the only park where all three species of the Sonneratiaceae mangrove family can be found.

A canopy walk or a boat ride are a couple of ways to see some of this region’s oldest trees such as the api-api, locally known as Miyapi, standing at least 7.6 metres tall.

Designated a national park by a Royal decree in 1981, Ao Phang Nga is famous for its Khao Phing Kan island — featured in 1974 James Bond movie The Man with the Golden Gun. Though the island is a major tourist draw, the 400-square-kilometre park also has the largest remaining primary mangrove forests of Thailand.

Fed by several tidal channels, the stunning forests surround the entire Phang Nga Bay. A Ramsar site, the park houses at least 28 species of mangrove and 80 species of fish.

Visitors should look out for the mangrove pitta, globally threatened Malaysian plover, Bengal monitor lizards, crab-eating macaques, and the endangered white-handed gibbons among other birds and animals.

Located in Kalimantan — on Indonesia’s portion of Borneo island, this UNESCO-designated Biosphere Reserve is covered in around 32.6 percent of all the country’s mangroves.

The 4,150 square kilometres of park area boast a diverse range of forests, including peat swamp and mangroves. The major draw for tourists is the world’s largest wild orangutan population.