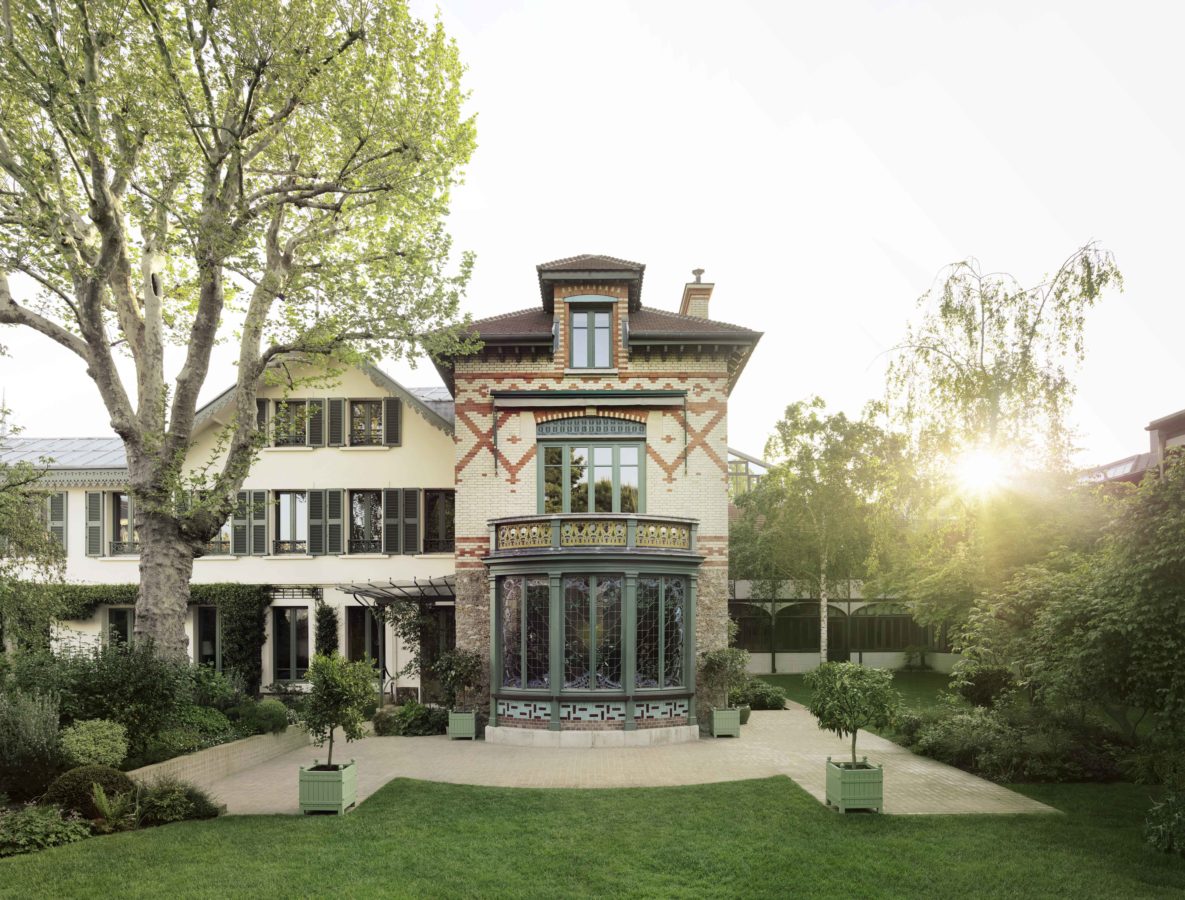 Travel
Inside the Vuitton Family Home, an Exclusive Virtual Tour with Benoit-Louis Vuitton
Share
Next article

The historic heart of Louis Vuitton – located in the Paris suburb of Asnières-sur-Seine – is at once family home, cradle of craftsmanship, museum, and archive. We join a virtual tour hosted by sixth-generation Benoit-Louis Vuitton.

Tall, devilishly handsome, stylish and with a worldly charm that has given him celebrity status on Instagram, 44-year-old Benoit-Louis Vuitton has his work cut out for him. As the great-great-great-grandson of Louis Vuitton, he currently holds the title of Corporate Director of Art, Culture and Patrimony at the French powerhouse, after previous stints as Director of Customer Experiences, Director of the maison’s Toronto boutique, Head of Product Watches, Head of High Watchmaking, and being involved in the commercial development of high jewellery. The Vuitton’s historic Asnières family home with adjacent atelier is also where he spent the first seven years of his life, playing in the garden with his brother, and even getting into trouble once for accidentally breaking a decorative stained-glass window.

Despite an international jet-set lifestyle – regularly rubbing shoulders with the rich, powerful, and famous – Benoit-Louis speaks with a heavy French accent as he kicks the virtual tour off in the dining room of the Vuitton family home built by his great-great-great-grandfather in 1878, describing it as “simple” – compared to later more elaborate additions to the house in 1900 by Louis’ son, George-Louis.

“Louis came from the countryside, so the first section of the house built by him reflects his very simple, down-to-earth nature, focused on his work,” Benoit-Louis explains. In the dining room, there’s a small display of trunks used for trousseau – linen, household items and other belongings collected by a bride for her marriage – that Gaston, grandson of Louis Vuitton, collected. They’re decorated with motifs such as lovebirds, which represent love and the richness of family life. “Gaston was a crazy collector of everything and anything. Thanks to him, we are starting to gather archives, with hundreds of thousands of documents and objects – and not just from Louis Vuitton,” he says.

“Louis’ son, George-Louis, was a real Parisian though, and also the first in the family to be educated in school, learning to speak English, and also travelling to England where he established the first store outside of France. He enlarged the house, and this second part is much more ‘richer’.”

Indeed, the living room, an addition by George-Louis, is in the Art Nouveau style, with ceiling mouldings, stained glass windows, a decorative green ceramic fireplace with floral motifs, a bronze bust of Louis Vuitton, and a striped canvas trunk – one of Louis Vuitton’s earlier trunks – being used as a coffee table. In this ‘rich’ environment, considered modern and innovative for its time, suppliers were welcomed – to show how successful and creative the business was. Benoit-Louis explains that the family house was built a few years after the Asnières atelier, which was constructed four or five years after Louis Vuitton founded the maison in Paris in 1854, as he needed a bigger space to create his traditional trunks.

The Louis Vuitton founder found that his rapidly developing business required a new nexus. He chose to open his workshop in Asnières, at the time a village to the northwest of Paris. Like all other decisions in Louis Vuitton’s life, this was a clever, conscious, and daring move. Asnières was on the banks of the Seine, allowing for easy delivery of raw materials including the poplar wood required for the already famous Vuitton trunks. A more modern means of transport was also at hand: one of the very first railway lines in France passed through Asnières, leading to the Gare Saint-Lazare, close to the Parisian trunkmaker’s first store.

Constructed in the futuristic Eiffel style of the time, these bright, airy ateliers were a radical shift from the dark workshops of the capital. Asnières rapidly became the heart of the Louis Vuitton savoir-faire, constructing trunks, luggage, and special orders for dispatch around the world. The new building also housed the Vuitton family, who initially lived on the top floor of the workshop, in order to remain as close as possible to day-to-day operations. Over time, as orders flowed in, the workshop continually expanded, taking on its current form towards the end of the 19th Century, when it was renovated by artisans from the Nancy School.

Benoit-Louis has fond memories of growing up in Asnières. “It was nice growing up in a place like that – not only in the family house, but running around the workshop. My brother and I spent a lot of time playing in the garden. We also had BBQs in summer and Christmas parties with all the employees. The environment certainly influenced my values and way of life; manufacturing, craftsmanship, innovation, how things look.” 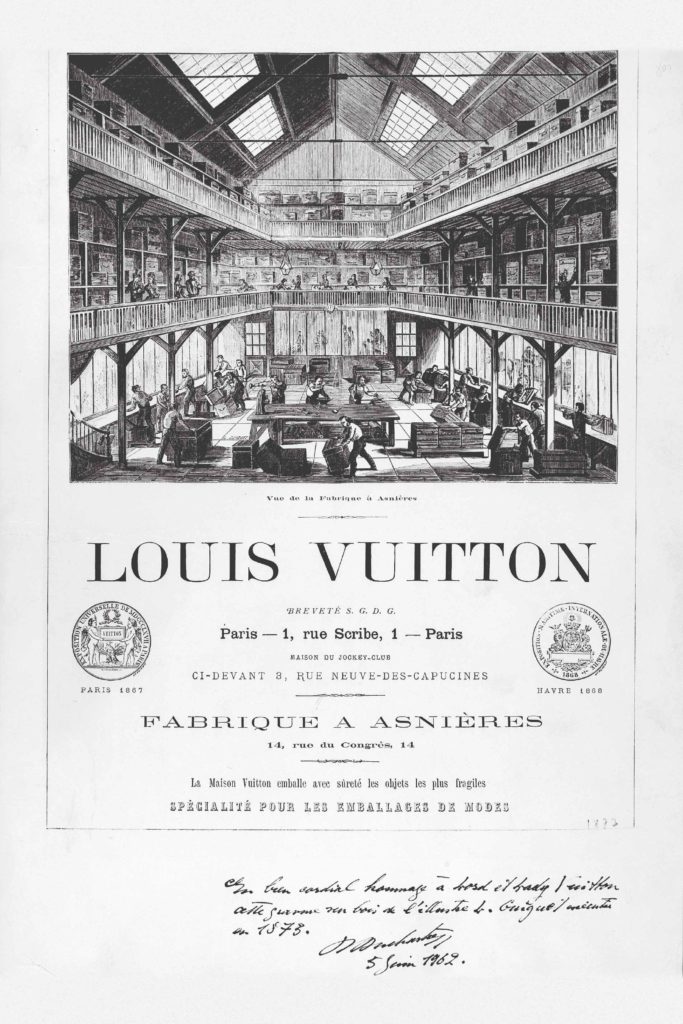 The workshops, a series of structures in the glass-and-steel Eiffel style, through the following century bore witness to groundbreaking events in the history of Louis Vuitton – from the creation of the brand’s signature monogram pattern – of which the exact origin is still shrouded in mystery – to the Houdini Challenge to test its patented locks.

And although the family moved out of the home in 1964, the atelier remained in business, specialising in hard-sided luggage and, perhaps most importantly, housing the brand’s vast archive.

As a guardian of Louis Vuitton’s savoir-faire, the Asnières workshop is still responsible for crafting the maison’s most exceptional pieces, including hard-sided trunks, items in rare and exotic skins, and – first and foremost – all special orders. With its special orders, Louis Vuitton has fulfilled the most extravagant requests and imagined the most ingenious designs, from the bed-trunk of explorer Pierre Savorgnan de Brazza to an iPad trunk for Karl Lagerfeld. A large number of such treasures are still carefully kept in Asnières, which stores 23,000 objects and 165,000 documents, including 110,000 customer records. 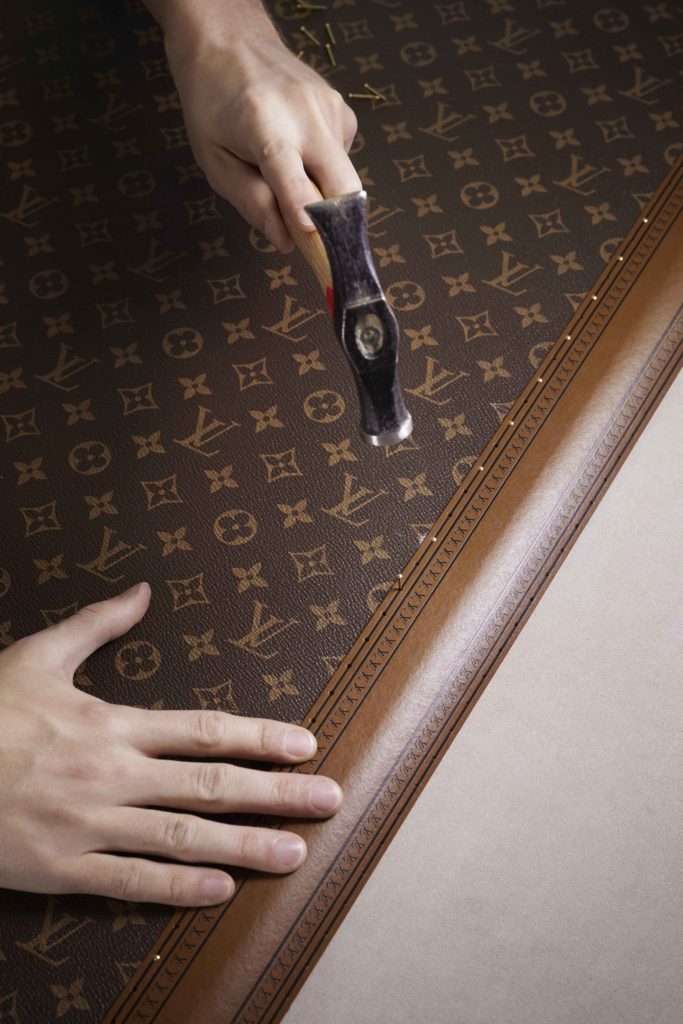 Drawing on these archives, curator Judith Clark has created La Galerie, a space devoted to the history of Louis Vuitton, located right in the Asnières workshop and open to the public. Geared to discovery and exploration, La Galerie brings to life the dialogue between artists, artisans and customers that has always been at the heart of Louis Vuitton through letters and sketches, personal effects, historic items, and artworks inspired by the maison, one of which – a work by Jorge Otero-Pailos – welcomes visitors as they enter. The ultimate symbol of the creative energy that pervades La Galerie, the made-to-measure display modules were inspired by the shape of a “Pateki” game designed by Gaston-Louis Vuitton.

The workshop houses approximately 150 craftsmen, each a dedicated specialist in the process of trunk-making. There are craftsmen who work on the process of glueing the canvas – be it the signature Monogram canvas or Epi leather – onto the wood structure. Instead of simply utilising a machine to do the glueing, the craftsmen painstakingly apply glue to stretch the canvas across the wood structure, nailing it from the edges to corners and ensure that no “bubbling” of the canvas occurs. There are also locksmiths who create unique lock and key pairs for every trunk that leaves Asnières.

As Benoit-Louis guides us through the rooms of his historic family home, pointing out framed pictures of the various generations of the Vuitton family, it’s evident how proud he is of his roots, and the important role Asnières has played in the evolution of the brand, and continues to play in preserving its legacy.

A peaceful counterpart to the humming activity of the nearby ateliers, the Vuitton family home maintains the magical feeling of a place which has witnessed the life of great minds, as comfortable in their destiny as they were forward-thinking in their approach.

Today, Benoit-Louis lives in a modern apartment in Paris, filled with vintage pieces inherited from his late father, Patrick-Louis Vuitton. “I spend weekends in my father’s country house though, which is being renovated at the moment. I’m keeping the old wooden frame but incorporating a contemporary glass house, and buying pieces of modern art for it. I’m a mix of history and tradition, innovation and modernity, so I like to mix things up. It goes with my DNA, and with the curiosity we have at Louis Vuitton to remain innovative,” he says.