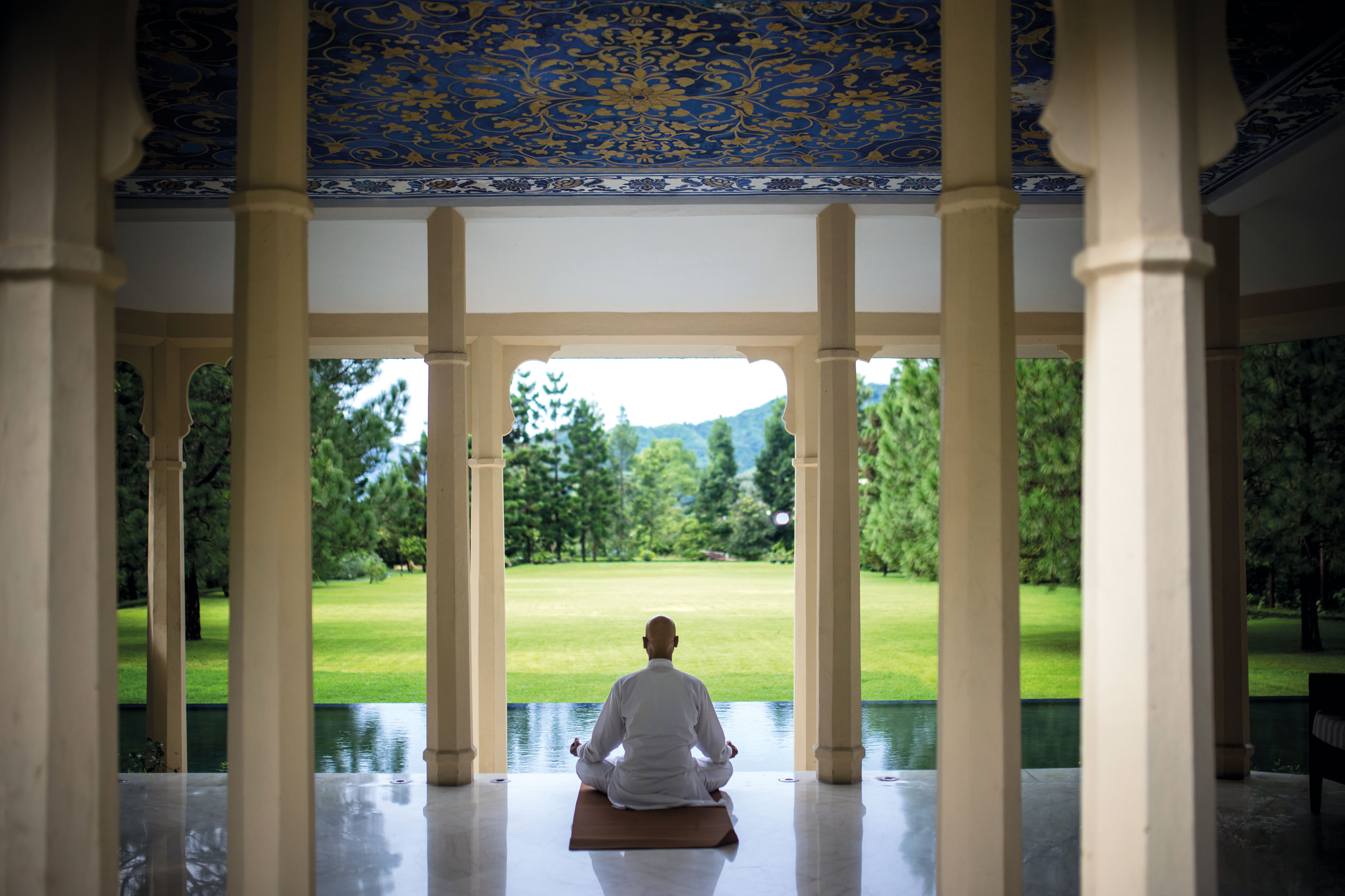 Travel
Ananda In The Himalayas: A Resort To Remember The Beatles’ Visit To India
Share
Next article

On the 50th anniversary of The Beatles’ visit to India to spread world peace, have lots of sex, bring about a spiritual revolution, write some famous songs and study transcendental meditation, I almost killed a yogi with a golf club.

I shouted a 4-letter word which wasn’t “Fore!” and muttered something more like “OMG!” than “om”.

Blissfully unaware of the danger and intent on mortifying his ego and annihilating the self, transforming unilateral passion to cosmic adoration, the gentleman swami in the white loose cotton kurta pyjamas remained in his closed-eye trance and continued to beautify his mind and commune with the rules of the universe as my golf ball sped with great velocity within an inch of his left temple, burying itself in a japonica bush and disturbing a family of langur monkeys enjoying some quality grooming time.

To affect some degree of spiritual regeneration and attain some serenity (sat-chit) similar to the man I had almost killed, I immediately sought two super-strong Kingfisher beers (“Most Thrilling When Chilled”) at the very healing price of £7 a pop, which includes a compulsory contribution to the Women’s Empowerment Fund in India and inbuilt IKST (Intense Karma Sickness Tax). One glass of Chilean Chardonnay would have set me back by £15.

The Price of Well-being

The super-pricey Ananda in the Himalayas is one of the world’s most famous and highly respected meditation retreats. It attracts guests seeking sequenced self-purification and daily programmed peace in body and mind, as well as to learn to rise above grossly unimportant material things such as high beer prices.

On hand are resident and visiting inferential therapists and whole-body welfare counsellors, weight management advisors, self-realisation instructors, intuitive and sacro-cranial masseurs, rolfers and masters of refining your etheric body and giving your auras that rejuvenated lustre.

The administration of highly priced decoctions via various, time-honoured routes allow many to find grounding and better brainwave coherence and stronger inner resilience, through their room’s spelt chaff-filled pillows and vetiver bath salts. After a week you are meant to become more accepting, including of sitar music and lack of Wi‑Fi. And perhaps even transcend
near-death experiences.

The Beatles had gone to Rishikesh to chill. Then, it was the yoga capital of India. Now it’s a centre for adventure tourism. You can zip-wire over and bungee down close to the surface of jade green waters of the holy river running through the Valley of the Saints. Of course, there is a Beatles Café.

In the Satsang yoga hall of the now uninhabitable Sidpha Puri accommodation block, the stage and dias on which the Maharishi addressed his blissed-out, bonged-up devotees are still there, but the roof has gone. It’s grotty. Graffiti covers the walls. Dated signatures cover John’s forehead, George’s throat, Paul’s eyes and Ringo’s eyes. Modern pop artists have turned it into a Beatles Cathedral gallery.

There are peace signs everywhere, as well as “Love is what is”, “All You Need is Love” and “Feel Love”. But, conspicuously absent is “Help”.

There are plenty of “Jai Guru Deva” (Victory to the Great Teacher Forever) scrawled around the training centre. Before leaving for India, The Beatles recorded the instrumentals tracks for “Across the Universe”. Its refrain was the standard greeting used by members of the Marashi’s Spiritual Regeneration Movement.

Born Mahesh Prasad Varma, the Maharishi died in the Netherlands in 2008. There were plans to turn the site into a meditation centre and home for street children, but no government money is being put into it for maintenance. Jerry Hall was rumoured to be planning something. Half a centenary after The Beatles lived there and the last time they travelled abroad together, the Rishikesh Ashram still awaits a new evolution.

No marigold garlands are being given out.

The place that inspired over 30 songs including classics like “Back in the USSR”, “Blackbird”, “Mother Nature’s Son”, “Ob La Di Ob La Da” and “Revolution” is a wreck, a  public toilet and an eyesore.

But it remains relatively peaceful, mainly because there is no music now. And no golf course.

John said he had had “a nice holiday there”. The gentleman in the front of the first green of the next generation of meditation retreats in Rishikesh had no awareness how close he was to having a very bad holiday.