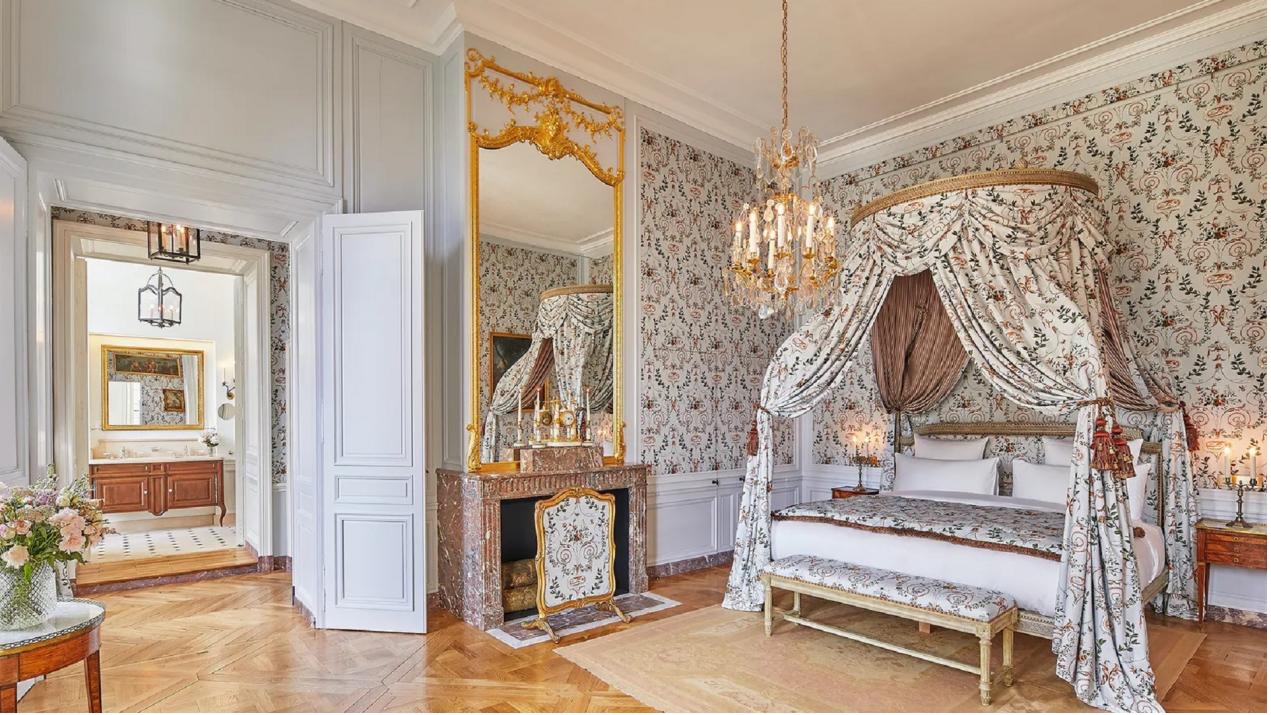 Travel
Le Grand Contrôle: Everything You Need to Know About the Luxury Hotel in Palace of Versailles
Share
Next article

If you have always dreamt of spending a night like King Louis XIV and Marie-Antoinette in the Palace of Versailles, here’s your golden opportunity. Airelles, a French hotel company that is a part of the LOV Group, has converted a building within the gates of the magnificent 17th-century palace into a luxury hotel and opened it to guests starting June 1, 2021.

Known as Le Grand Contrôle, the building was originally built by Louis XIV’s favourite architect Jules Hardouin-Mansart. Restored as a luxury hotel, it has 14 lavish rooms and suites and offers experiences such as a Valmont spa, fine dining by celebrated French chef Alain Ducasse and exclusive visits to the gardens of the palace. Guests are welcomed by staff members dressed in uniforms that were the norm in the 18th century. A dedicated butler is provided to each guest.

The building is built in classical style and was once the residence of the elite guests of the royalty — ambassadors, writers and artists — as well as France’s ministry of Finance through most of the 18th century. Weddings, private dinners and events for up to 54 guests can be held here. All the rooms and suites can be booked for up to 36 guests, and events can be held in the main palace as well.

After winning a bid to renovate some buildings just outside the gates of the Palace of Versailles, a UNESCO World Heritage Site, and convert them into luxury hotels, Airelles began with the uplift of Le Grand Contrôle in 2016. Architect and interior designer Christophe Tollemer worked on the renovation to create the modern edifice while maintaining the centuries-old characteristics.

Contemporary comforts share space alongside the period furnishings and fittings in each of the 14 rooms and suites. The interiors have been decked with paintings and furniture that were once part of the building. From the inside, the guests can see the Orangery Garden and the Lake of the Swiss Guards.

Though modernity is part of the decor, Airelles has used sustainable methods such as geothermal energy to heat the building and LED lights in antique chandeliers. No single-use plastic can be found in the rooms.

There are six rooms and seven suites in the hotel. Of these, the Necker suite is the grandest with four-metre high ceilings and 120 square metres layout. It was the apartment of Jacques Necker, a key figure of the French Revolution who served as the finance minister and statesman for Louis XVI.

For those who are more into fashion, the Rose Bertin Room may be the perfect stay. It is named after the kingdom’s first dressmaker Rose Bertin, who was in the eyes of Marie-Antoinette the “Minister of Fashion”. This room has exposed period beams and terracotta tiles on the floor.

One of the main features of the hotel is the spa by iconic Swiss skincare brand La Maison Valmont. The spa’s interiors have been inspired by the marble courtyard of the Palace of Versailles. Guests will be treated to the brand’s exclusive Signature treatment which has been inspired by Marie-Antoinette’s beauty rituals. A variety of other massages and treatments are offered as well. There is an indoor swimming pool, sauna, steam room, fitness room and hammam for guests to relax and rejuvenate like royalty.

The ingredients used to make the delicious dishes in the restaurant are sourced from local suppliers. Guests can enjoy everything from breakfast to dinner, served in a style reminiscent of the past when the King and the Queen used to enjoy the feats. There are two-, three- and a five-course menu. Among the dishes are delicate mallard Galantine with foie gras and pistachios and signature sweet plates such as L’Elixir de Louis XV.

Afternoon tea is served in the sitting room, as a homage to Marie-Antoinette. Le Chocolat Alain Ducasse hot chocolate can be enjoyed as a treat. At the bar, you can order cocktails such as “Royal Snowflake” and champagne poured over a seasonally scented granite. On Sundays, a buffet is prepared with classic dishes and seasonal ingredients. The delicacies can also be enjoyed in the rooms as part of the hotel’s room service called Le Petit Couvert Du Roi.

Guests are also invited to enjoy a three-course Ducasse feast to the music of a string quartet in the Salle des Hoquetons — the former apartment of the daughters of King Louis XV. After-hours access is available and the dining room opens onto the gardens.

Those who stay at the Le Grand Contrôle can get a photoshoot done in their suites while wearing the period costumes that were used in the hit Netflix series Versailles. They can enjoy a scrumptious dinner served by a private butler in their suite while waiting for the photos to develop.

As a guest of the hotel, you get to be a part of the private tours of the Palace of Versailles. These include exploring Louis XIV’s Grand Trianon and the English Gardens created for Marie-Antoinette. There is a different tour route each morning of the stay. Every evening, guests can explore a different part of the palace including the historic Hall of Mirrors and the Royal Opera House. There is a complimentary private tour after opening hours, and several previously unseen spaces are covered by the guide.

No guest would perhaps want to miss a tour tailored around a day in the life of Marie-Antoinette. It starts with costume fitting, goes through places such as Grotto, includes a pamper session at Valmont Spa, and ends in a dinner at the Queen’s favourite place — the French Pavilion.

Another special tour centres on the work of Head Gardener to the royals, André Le Nôtre. In this, guests are given a private tour of the gardens and get to enjoy a picnic in the groves. They can pick seasonal produce and learn to cook a dish with a culinary team which they can enjoy alongside a Ducasse feast.

A special entertainment session for guests of the Le Grand Contrôle is a private concert at the Royal Opera and a chance to personally witness the work of Blaise-Henri Arnoult, First Theatre Technician to the King.

Treat Yourself with these Four Fabulous Staycation Packages

10 of the Best Yoga Retreats Around the World