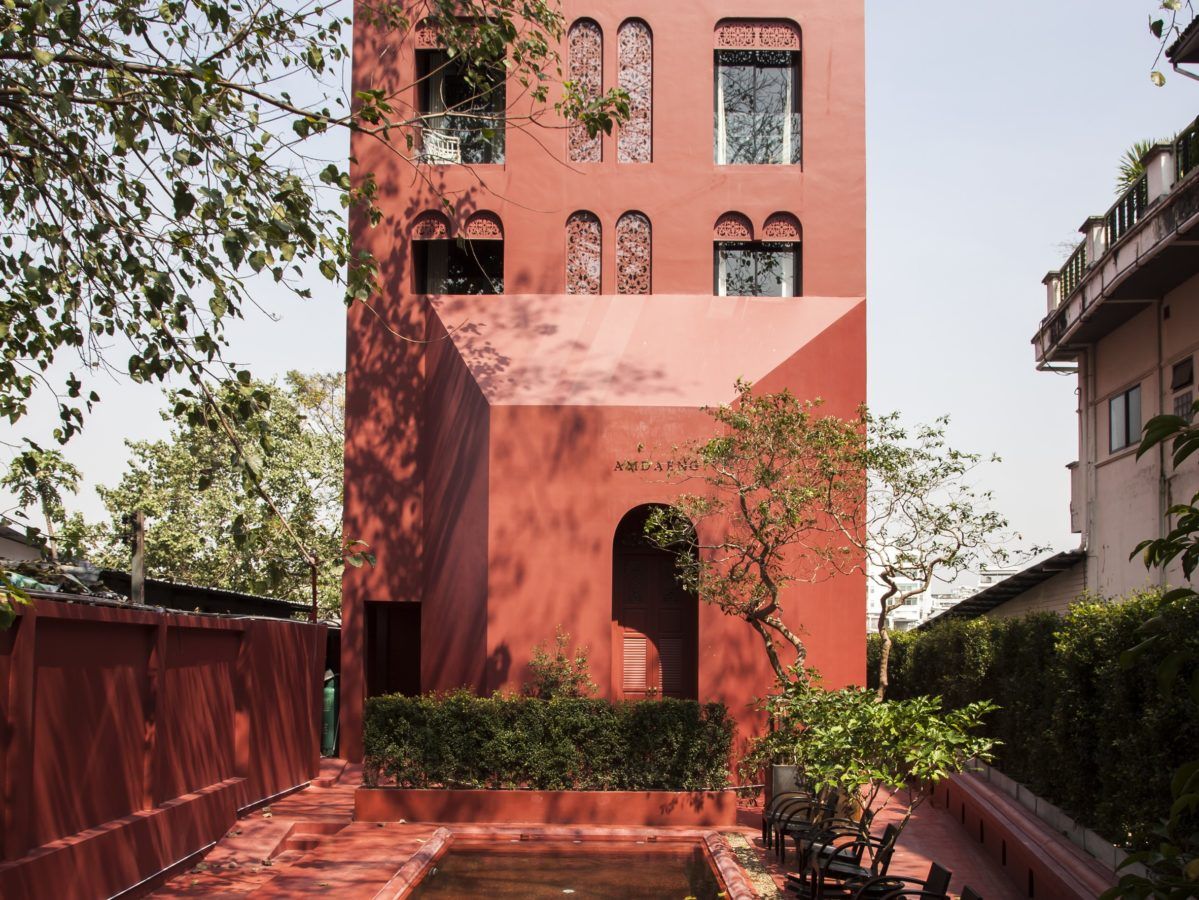 When it comes to riverside vacation and the old town, there are few hotels with distinct characters and designs as Amdaeng Riverside Hotel (Amdaeng). The ethereal red building — with its smooth surface and sharp angular façade — stood gracefully beside the Chao Phraya river. Its presence is as beautiful and impressive in real life as they are on the many media websites and magazines the hotel has appeared in. Stealing time between their busy commercial shoots, we sit down with the co-founders of Amdaeng and Thailand’s leading creatives, Passapol “Lek” Limpisirisan and Wiboon “Min” Leepakpreeda, to trace their journey, discuss the hotel and everything in between.

Through the screens of a video call application, Lek and Min squeezed themselves into the frame, their backdrop the location for their latest commercial shooting. There are similar elements to the two that show how much they are in sync with each other, a result of friendship formed through years of working together. Indeed, Lek and Min were friends and a team long before co-founding Amdaeng. The power duo had worked together for years as an art director (Min) and copywriter (Lek) in the advertising field, winning prestigious awards along the way, including D&AD and Cannes.

After years of success, the two decided to start their creative agency, Monday, (the first syllable, mon or mun, which has a double meaning of ‘fun day’ in Thai), and their talents eventually caught the eye of WPP, a global communications and advertising company. Monday became the first company that saw a partnership between local owners and WPP. “Usually, WPP doesn’t partner up with locals, but in this case, it happened because we started Monday before that, and they were interested in joining up with us,” Lek explains.

Some of their latest works that have gained much attention and many awards include their works for Sprinkle Drinking Water, which was a commercial success (no pun intended) in terms of artistic creativity and sales push. The former presidents of B.A.D. Awards then continue, “we work to produce good work, and good work for us doesn’t always have to win awards, but we want them to have a commercial impact or consumer insights that touch people’s hearts.”

This appreciation for artistic expressions is also clearly reflected in Amdaeng. The hotel’s name, Amdaeng, is an old Thai word from the reign of King Rama V, which is the equivalent to the modern honorific of ‘Miss’ in today’s Thai language. The word is a homage to the original landowner, Amdaeng Klee, and using this concept of amdaeng or ‘miss’, the hotel takes on a persona of a beautiful lady who is a little fussy (in Lek and Min’s words) but charming in her own way. “We both like art, and so when we began working on Amdaeng, we wanted it to be different from the other hotels. By definition, Amdaeng would be a design hotel, focusing on both architecture and interior design. We have a unique positioning, and hence many of our guests are people who like art and design,” says Lek.

He then tells a funny anecdote of how the locals would comment on their guests’ cars. “Many people would tell us that the cars that Amdaeng guests have excellent taste in automobiles and vintage cars. I think it’s because a lot of our guests comprise people from different creative fields and those who are drawn to this building—which is a result of our combined effort and the architect and interior designer who worked on this project.” Min then continues. “The guests don’t come to Amdaeng just looking for a place to spend the night in—they come to look for new experiences, to stay in a room that is unlike other places they’ve been to, to see the river or enjoy the art and architecture.”

Indeed, the experiences at Amdaeng are curated to make you feel transported into another world. Calling themselves ‘the most romantic hotel in Bangkok’, and it certainly is not an exaggeration. Just as the hotel’s unique red hue seems to suggest, there is a certain sensuality to staying at the hotel: the breeze against the skin, the flow of the river through the windows, the open bathroom, or the intricate Thai details of the ‘gingerbread’ wood carving details that form the space. And of course, with art being a passion that intrigues Lek and Min, the hotel has hosted several exhibitions featuring works by contemporary Thai artists like Nakrob Moonmanas, Gongkan, and Naris that fittingly reflect the personality of the hotel.

The hotel has recently celebrated its fourth anniversary. Despite her relatively young age, Amdaeng is loved by foreign and local guests alike, with stellar reviews in guidebooks, media and travel booking websites. Now at the beginning of 2022, the two have plans for new exhibitions and another exciting project by the river. Hinting that their next hotel will be an ornate colonial-style architecture by the river, there is no doubt that it would be as equally captivating as this Amdaeng—this beautiful lady by the river.