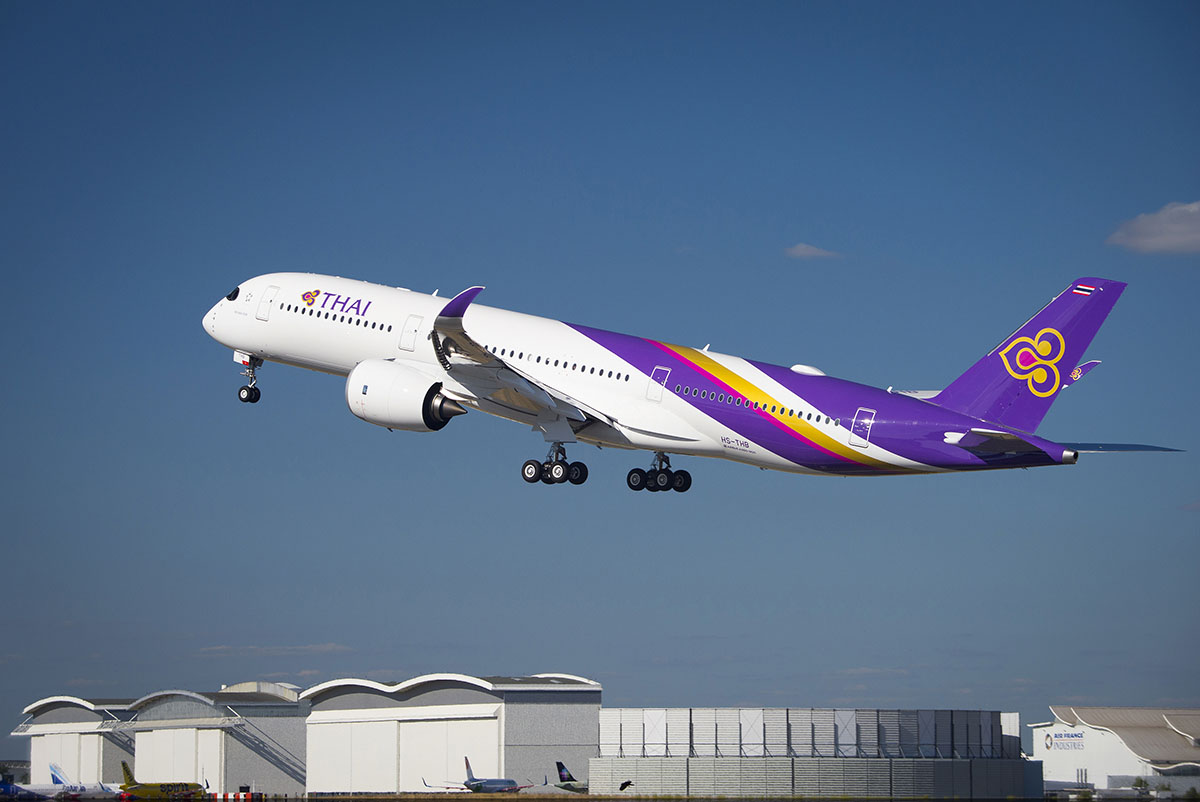 Why Thai Airways’ New A350 XWB Helps you Cruise with Comfort

For frequent flyers and globetrotters, Airbus is synonymous with constant innovation – the aeronautical mastermind behind safe and comfortable air travel for more than 50 years. From the early days of air travel, when aircraft were merely transportation vessels, Airbus planes have evolved with optimised cabin comfort, style and safety.

The next-generation aircraft, the Airbus A350 XWB (the XWB acronym stands for “extra wide body”), is an all-new family of mid-sized, wide-body and long haul aircraft born from a customer-centric approach to offer maximised comfort in whatever class you’re travelling in.

The passenger cabin is 5.61-metres wide, allowing for 40-plus additional seats, which are also wider, allowing for more leg and shoulder room. In a typical new three-class configuration, the A350 XWB offers an 18-inch seat width in Economy class (nine-abreast), complemented by Premium Economy with a 19-inch seat width (eight-abreast) and the same seat width in Business class but with four-abreast cabins.

It is a luxuriously spacious configuration in not only Business, but also Economy class.

Vertically, the wider fuselage allows for higher ceilings and bigger windows. Not only do passengers enjoy more shoulder and legroom, but they also don’t feel cramped or uncomfortably confined due to the elevated cabin roof. While the previous generation planes had rounder and shorter curves on the side that made the windows narrower and pushed down the ceiling, window seats on the new A350 XWB feel very spacious indeed. Window seats now fully benefit from the outside view allowed by the larger panoramic windows.

The A350 XWB cabin design – with its smooth curves, flowing lines and innovative lighting – also generates a pleasant, soothing atmosphere. Throughout the flight, passengers enjoy the quietest cabin in its class and the lowest cabin altitude of a maximum 6,000 feet at cruise level, while the typical cabin altitude level is 7,000 feet on average. This decreases discomforts such altitude sickness, nausea, headaches and a lack of energy during the flight.

Spending hours travelling in a confined aircraft can make for a very uncomfortable experience, and a lot has to do with the air quality in the cabin. With the A350 XWB, the cabin air is renewed every two to three minutes, allowing in 20 percent more fresh air. In addition, the A350 XWB offers the unique possibility to install an active humidification system in Business and First Class to reproduce a private jet flying experience.

Larger overhead stowage provides space for more carry-on baggage in every class, and enables room-like spaciousness in Business class – thanks to the removal of the centreline overhead stowage. You will not only feel the difference, but also see the difference with full LED ambient lighting. The possibility to choose from 16.7 million colours allows airlines to create individual mood lighting options to promote the wellbeing of passengers during every phase the flight.

Lighting scenarios mimicking a natural sunrise and sunset are not purely for aesthetic reason, but also to reduce the effects of jet lag. The LED ambient lighting system is controllable both lengthwise and across the cabin – a feature that is unique to the A350 XWB.

The A350 XWB is also the first aircraft to feature fourth-generation inflight entertainment. With high-bandwidth fibre optics, high-definition video becomes a reality for all passengers, on screen sizes of up to 12 inches in Economy class. Personal space is further increased by virtually invisible seat-connect boxes and cables that run entirely under a completely flat floor.

Air travel is often scrutinised for creating a larger carbon footprint than other modes of transportation, but it is becoming less so with the super-efficient A350 XWB. The aircraft has eight times less noise than previous-generation aircrafts. Next-generation Rolls-Royce Trent XWB engines and state-of-the-art aerodynamics help reduce CO2 emissions by 25 percent per passenger, while the exterior noise is much lower than previous-generation aircrafts, too.

The morphing wings of the A350 XWB, which was inspired by nature, optimises the wing loading, reduces drag and lowers fuel burn. These advanced features make the plane more energy-efficient, environmental-friendly and cost-effective.

Since its first launch in 2014, more than 84 A350 XWB aircrafts have jetted across the globe with 12 airlines, serving more than 15 million passengers on up to 140 routes. Among them is Thai Airways International (THAI), which has maintained an enduring relationship with Airbus for routes covering short domestic hops to medium- and long-haul flights to Asia and Europe. This relationship dates back to 1977 when THAI placed its first order for the original A300B4 and became one of the company’s first customers.

The most recent addition to THAI’s Airbus fleet of 27 aircraft is the seventh delivery of an Airbus A350 XWB, received at the Airbus Delivery Centre in Toulouse in September. “So far, THAI has ordered 12 Airbus A350 XWB aircraft, with four on purchase orders and eight on lease,” says Usanee Sangsingkeo, acting president of THAI.

“The Airbus A350 XWB is the world’s newest aircraft type and the most modern, wide-body commercial plane that offers greater comfort. THAI plans to modernise its fleet by decommissioning older aircraft and increasing production to support company growth, whereby flight frequencies will be increased on popular routes.”

THAI’s latest A350 XWB, which was royally bestowed the name of Than To, consists of 321 seats with 32 seats in Royal Silk Class. Each of the 21-inch seats in this class is fully equipped with 16-inch touchscreens that can connect to Wi-Fi, communication devices and electrical plugs. The 289 seats in Economy class are 18-inches wide and equipped with 11-inch touchscreens with the same features.