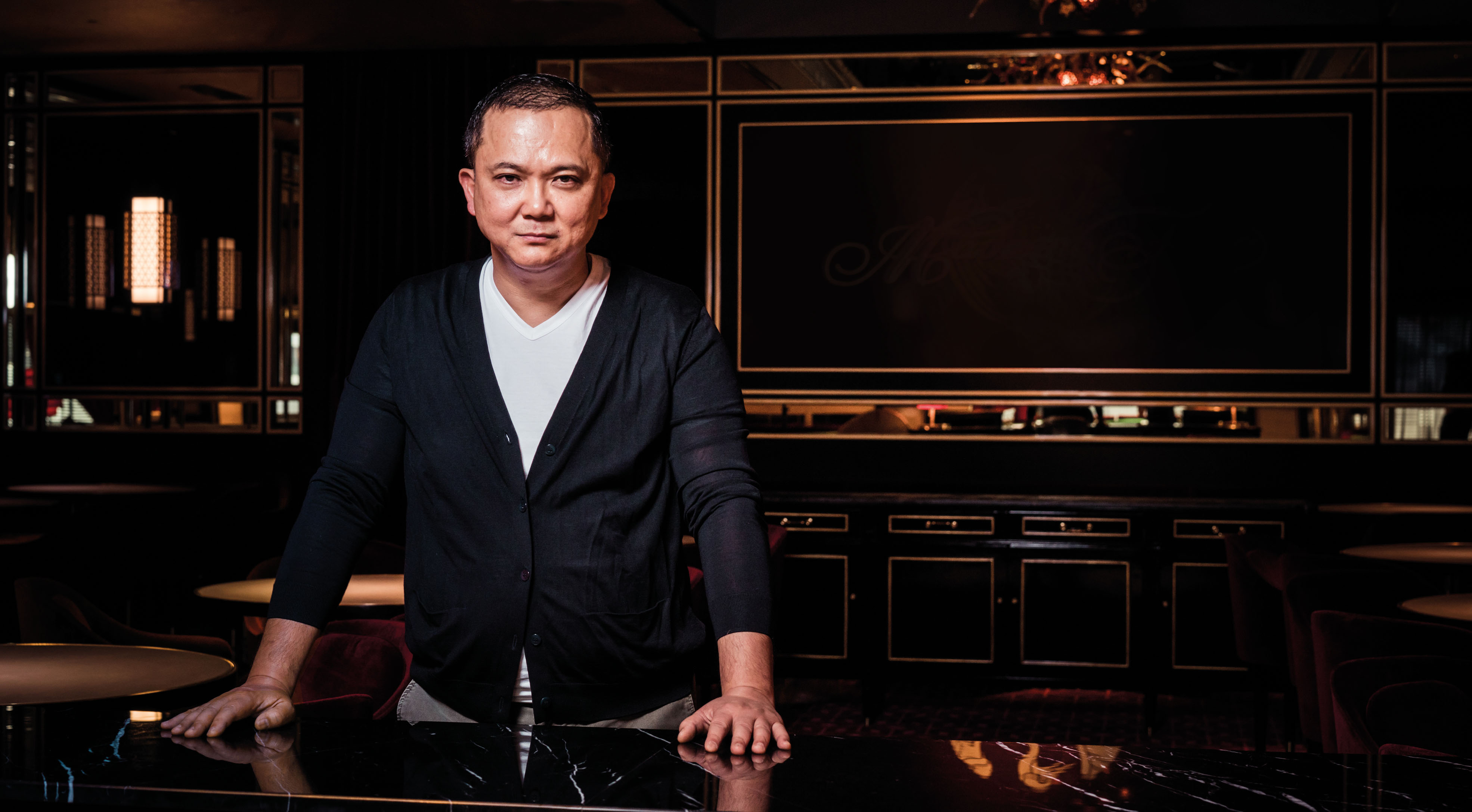 There are those who set up restaurants out of a simple, single-minded desire to share good food, and everything else may be secondary. And there’s Alan Yau, who, despite being an unabashed non-cook, strategises — almost agonises over — every detail of his restaurants, from the menu to the interior décor and the philosophies that guide their operation. The London-based entrepreneur originally from Hong Kong peppers his speech with terms such as “manifesto”, “opportunity cost” and “exit value” in discussing his process of setting up one dining concept after another; the roster includes the lavish supper club Park Chinois in Mayfair, the approachable Japanese canteen chain Wagamama, and the artisanal Italian bakery Princi in Soho.

SEE ALSO: 3 new artistic menus to try at these stellar restaurants in Singapore

The serial restaurateur makes his first foray into Southeast Asia this year with Madame Fan at Singapore’s The NCO Club, as the major tenant in a historic building that once served as a space of leisure for the city’s elite. Promoted as an “etiquette-free lifestyle dining concept”, Madame Fan is a continuation of the philosophy Yau terms old-school — a reaction to the new-school style of entertainment restaurants exemplified by Buddha Bar in Paris; more grower champagne and Portofino, less vodka and Ibiza, according to the 55-year-old.

This devotion stems from Alan Yau’s fervent belief in an approach that is rooted in the authenticity of the dining experience and eschews superficial ostentation. “Nowadays I don’t like going to trendy restaurants — new-school is about what’s fashionable and sexy,” Yau explains. “I prefer the old-school way, with a seasoned maitre d’ in his fifties who knows you by name and understands what’s going on on the restaurant floor, with whom I can talk about what’s in season, what’s fresh and how best to prepare it — it’s a dialogue.”

Other creations by Yau include Britain’s first Michelin-starred Cantonese establishment Hakkasan, the one-Michelin-starred Yauatcha, modern Thai chain Busaba Eathai and Turkish flatbread restaurant Babaji Pide, but Yau says he hasn’t kept a tally of just how many dining concepts he has launched and developed — and eventually backed out of. He exited Busaba Eathai, Yauatcha and Hakkasan in 2008 and a few more in 2016, and he’s not one to vacillate or get sentimental about letting go.

“I look forward to doing new things, because I’m never short of ideas,” Alan Yau explains. As for the projects he does as a consultancy or partnership, if other stakeholders push the ideas to the point where he doesn’t believe in them, he finds himself gradually losing interest, he continues. “I can gauge the potentiality of a brand’s exit value,” he adds. “If the time and opportunity cost of getting to that exit value is greater than the value itself, I’d rather sell the brand than spend the next decade babysitting it.”

Mere pages aren’t enough to encapsulate the complexity of Yau’s ideas. A politics and philosophy student from the City of London Polytechnic, he started Wagamama with little marketing experience but singular ambition. “Conceptually I tend to form a platform like this: If I were to start a political pressure group or party, what components would I need?” Yau explains. He sets the tone with ingredients such as manifestos, mantras and ideologies to create what he calls a full rationale, where every element comes together to form a cohesive narrative and journey. In Wagamama’s case, the Japanese design ideology of wabi-sabi, or the appreciation of beauty amid imperfection, informs the interior’s look as interpreted by architect John Pawson, while kaizen, or continual improvement, is the anchor in the restaurant chain’s corporate culture.

Though he was decorated with an OBE in 2006 for his services to UK’s restaurant industry, Alan Yau isn’t immune to the struggles of compromising on the authenticity of ethnic cuisine. “I really don’t set out to do, say, fusion [food],” he explains. “But at the same time, the criterion for success has to be both reputational and financial.” To him, that is determined by market forces and sales analyses; no matter how good or traditional an item is, if it doesn’t perform, it is dropped. “There’s a good Japanese Zen Buddhism saying that goes, ‘the bamboo that bends is stronger than the oak that resists’,” he adds. “For me, it’s a practical operation.”

As the person who drives menu development at his restaurants, Alan Yau has high standards for what qualifies as culinary innovation — he cut a mango spring roll from Hakkasan’s menu because he considered it superficial and derivative. “I felt it was extremely tacky, and there’s no intelligence in it,” he explains. “It’s a very mechanical application.”

But given how much thought Yau puts into conceptualising original recipes and menus, it may be hard to reconcile it with the fact that he hardly ever cooks. “Yeah, I find that strange too,” he replies with a chuckle. Acting more like an executive chef than a mere business owner, Yau has a clear view in his mind of how every dish should taste, look and be executed. “I’ve been able to acquire taste quite early,” he says. “I became quite confident in terms of what tastes good and what doesn’t.”

Alan Yau got his start in the restaurant business after he moved, at age 12, from Hong Kong to Norfolk, UK, where he grew up spending evenings and weekends working in his family’s Chinese takeaway. Recalling his difficult upbringing in both places, he says he joined the F&B industry out of a sense of duty as the eldest son, to care for his family. Though he tried his hand as a management trainee in an engineering firm, he went on to open a takeaway business in the late 1980s.

Over the decades, he has announced two retirements — the first in 2009, when after a bout of Bell’s Palsy, he spent eight months in Thailand training as a Buddhist monk, and the second in 2012 — but he can’t seem to disentangle himself from the industry he has spoken less than admiringly of. While he’s developing his Softchow tech platform, a democratic online network for foodies by foodies, it’s clear the world’s restaurant scene won’t be seeing the last of Yau for quite some time.

PrestigeOnline ends each personality piece with a P.S. – a postscript that highlights high-passion and how one powers through adversity, as shared by our Prestige society. This could be a person’s top tips for success, lessons they’ve learnt or passionate advice. Here, we distil some rules serial restaurateur Alan Yau seem to live by:

“Nowadays I don’t like going to trendy restaurants — new-school is about what’s fashionable and sexy. I prefer the old-school way, with a seasoned maitre d’ in his fifties who knows you by name and understands what’s going on on the restaurant floor, with whom I can talk about what’s in season, what’s fresh and how best to prepare it — it’s a dialogue.”

To Yau, no matter how good or traditional an item is, if it doesn’t perform, it is dropped. “There’s a good Japanese Zen Buddhism saying that goes, ‘the bamboo that bends is stronger than the oak that resists’. For me, it’s a practical operation.”

3. Twice As Tired Of Retirement

“I enjoy doing food, and developing ideas in food is quite easy for me. It’s more of a passion and lifestyle.”