Just one year after its initial opening, Blue by Alain Ducasse restaurant at ICONSIAM, led by Executive Chef Wilfrid Hocquet, joins the star-studded winners’ circle in the 2021 edition of Thailand’s Michelin Guide.

On the morning of December 16th, 2020, The Michelin Guide Thailand edition announced its selection of the Kingdom’s best dining establishments, at a grand ceremony held in the ballroom of the new Four Seasons Hotel Bangkok at Chao Phraya River. As Tippawan Nitijessadawong, the Michelin Guide Thailand Director, made her way through the list and revealed the winners for this year, ovations followed as restaurants took home this most sought-after award, which grants recognition to establishments for exceptional contributions to the food and beverage industry. One very applaud-worthy winner this year was Blue by Alain Ducasse, which was blessed with a star for the first time. Receiving the award on stage was the restaurant’s Executive Chef Wilfrid Hocquet. After being presented with the coveted red plaque by Manuel Montana, President & Managing Director at Michelin East-Asia & Oceania, the overjoyed chef made a very brief acceptance speech in which he thanked his mentor, Alain Ducasse, as well as his sous chef Lijo George and Executive Pastry Chef Maxou Boonthanakit, as well as the management of ICONSIAM, acknowledging that this year’s win was truly a group effort.

In conversation after the awards ceremony and luncheon, chef Wilfrid admitted that this win was also a very personal one, and that the difficulties posed by the 2020 global pandemic made the victory especially poignant. “I was the chef for two of Alain Ducasse’s restaurants, each with a Michelin star. But the restaurants had it already, and I just maintained it,” he explains. “But this is the first time I win at a newly opened restaurant, so yeah, it’s more personal. But don’t get me wrong, it’s totally about teamwork too. You cannot do anything alone.

“After being open for just one year, but having spent four months of that time closed, we are all very happy to be recognised for the hard work. We’d only been open for three months when we shut, back in March [2020], but honestly, we came back stronger. We returned to work feeling like we’d been open for two years. The break brought us to another level,” he goes on to say, reflecting on what has been a challenging yet ultimately rewarding year for both he and his co-workers. In some ways, challenges have been a constant in this chef’s wide-ranging career, and most of these challenges he has set for himself. Originally born in Canada, in the French-speaking province of Quebec, Wilfrid and his family returned to France when he was still very young. His humble childhood years were spent in the Montpellier region, and it was his bakery-owning uncle who first got this self-confessed “sweet tooth” interested in the art of patisserie. Later, at the age of 15, he told his mom he wanted to be a chef and so he was sent off to culinary school.

“At the same time, I was a bit turbulent,” admits the now 41-year-old, searching for the right English word to describe this period of teenage angst and unrest. But he adds that the guidance of one of his chef professors helped him channel his pent-up energies into learning his craft and getting his diploma.

His first real career job, at the age of 20, was at Jacques and Laurent Pourcel’s three-Michelin-starred Le Jardin des Sens, a posting Wilfrid’s professor helped him land. After spending two-and-a-half years there, he then decided one day to “drive to Monte Carlo, to Le Louis XV, to submit my resume”. Six months later his bold tactic bore fruit, and he found himself employed at this prestigious three-Michelin-starred restaurant, working for the first time – but definitely not the last time – for the legendary restaurateur and chef mentor Alain Ducasse. Chef Wilfrid has since worked at Ducasse’s La Bastide de Moustiers, Terras Hôtel, Bar & Bœuf, and Benoit, the master’s one-Michelin-starred Paris bistro. However, his lengthy CV also includes stints at Daniel – Daniel Boulud’s three-Michelin-starred New-York City restaurant – and two postings in Bangkok: Quince in 2013; and Dusit Thani’s D’Sens French restaurant (2013-2014). After several years spent working in the USA, Wilfrid found himself back in Bangkok in early 2019 as preparations got underway to launch Blue by Alain Ducasse, the acclaimed restaurateur’s first foray into Thailand.

“I learned a lot with Alain Ducasse,” Wilfrid admits, “but at the same time the years I spent away allowed me to find my own style. Now I’ve come back to work for Alain Ducasse with all my experience, so it’s a mix of his style and my style – which makes it really different. What we do at Blue you cannot find at any other Alain Ducasse restaurant. There’s my creativity, and then there’s the input of people like my pastry chef, Maxou, who has never worked for Alain Ducasse before. Through our teamwork we’ve built a strong identity, which I think is great.” When asked what keeps him coming back to Alain Ducasse, the chef answers, without hesitation, that it’s the “attention to detail”. At Blue, this attention to detail can be seen reflected in everything from the restaurant’s breathtaking interior – courtesy of Jouin Manku design studio – to the first-class service led by General Manager Alex Cufley, the impeccable wine pairings by Wine Director Antoine Simonnet and, of course, the exquisite range of ever-changing delicacies on the menu. One such delicacy is the organic blue crab from Phuket, served with Chiang Mai tomato and gold caviar. “It’s the only dish we’ve kept on the menu from the very beginning,” Wilfrid points out.

“What we think is best we put in the ‘Blue Experience’ menu, where you’re going to get what represents us best. We have one dish with chilled carabineros, butternut squash and mozzarella, and I really love it. We also have a cheese soufflé, and a French sea bass dish, and our desserts… don’t forget the desserts, because that’s big part of our success,” he adds, giving another nod to his Thai-American pastry chef. 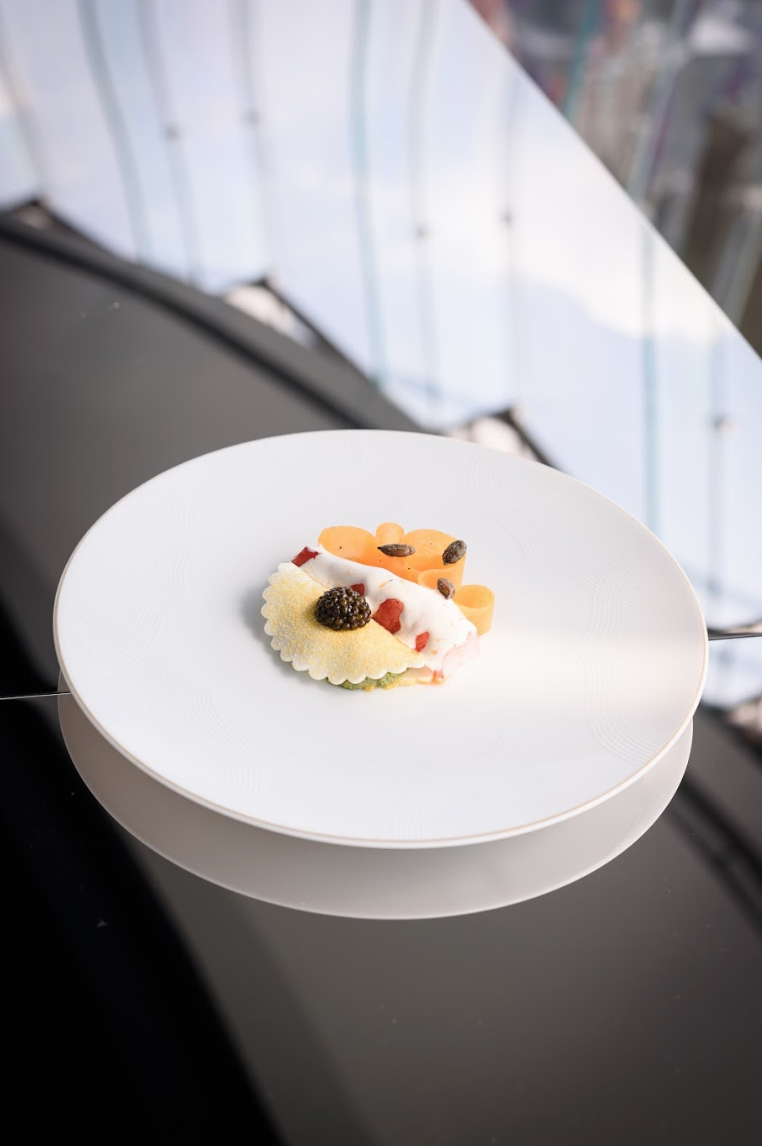 “I always love a dish with technique,” he continues. “But not technique for nothing. A technique that brings something to the dish. I’m happiest when I can do something traditional, but with a twist. At Blue it’s a French culinary experience but very modern. In terms of flavour, we are not going for fusion. It will be classic, but the presentation is going to be very modern and very pure.”

The combination of Blue’s Michelin star accreditation and the recent opening of the new BTS Gold Line extension, which brings visitors right to the front door of ICONSIAM, will no doubt see an influx of even more fine dining lovers making the trek to this prestigious riverside establishment. For Wilfrid and his dedicated team, it’s a nice kickstart to the year ahead, and a sweet reward for all the hard work put in already.