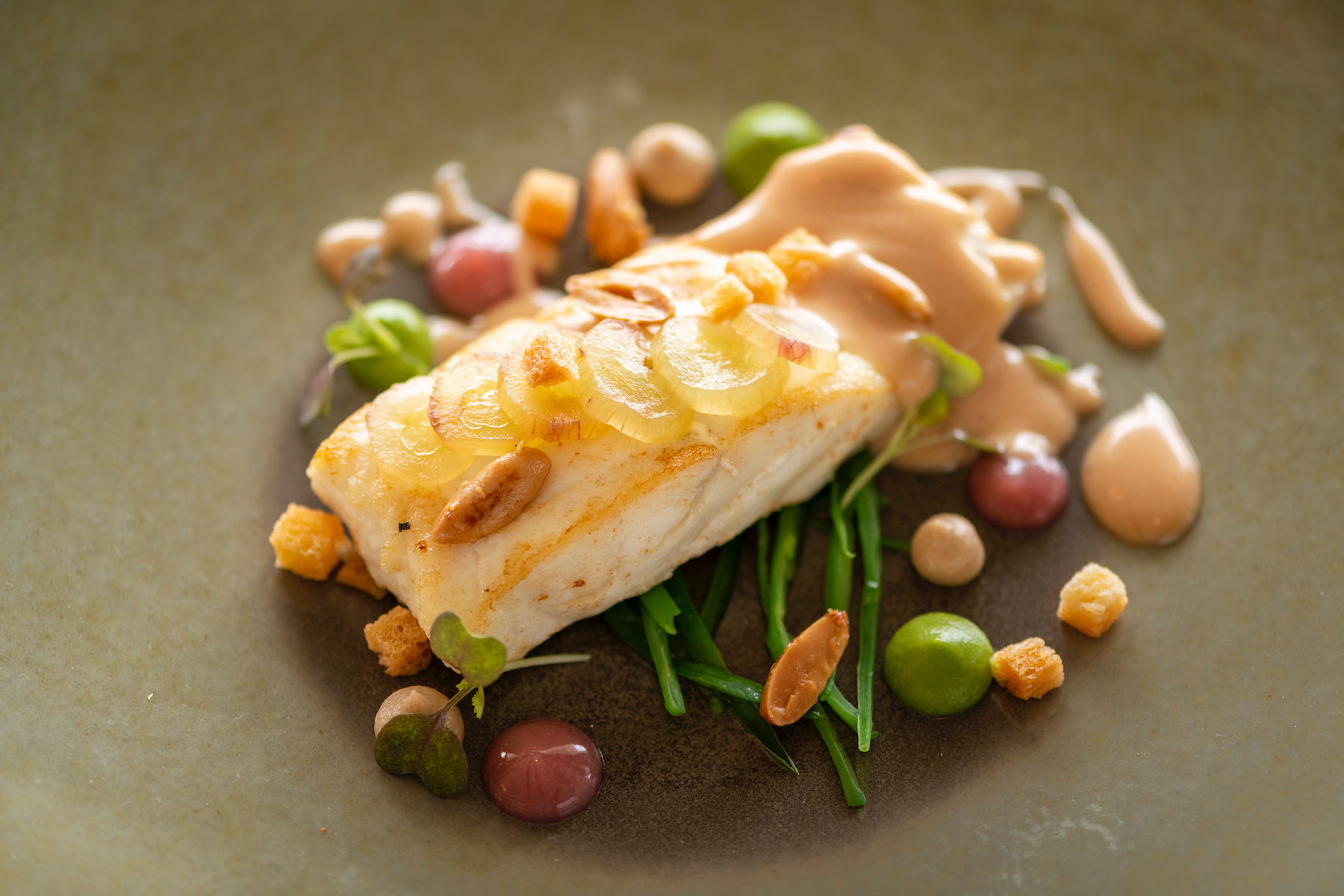 Alain Roux is no stranger to Le Normandie, nor is this his first visit to the Mandarin Oriental’s totemic Michelin-starred dining establishment. An heir to a dining establishment himself, the Chef Patron of The Waterside Inn — the UK-based restaurant which has held three Michelin stars for 36 consecutive years, longer than any restaurant in the world outside France — is the son of founder Michel Roux and once accompanied his iconic father during his stint as guest chef at Le Normandie a few years back.

Taking the reign of the Thameside restaurant from his father, Alain has led a team of more than 40 to continue the culinary legacy legacy — a legacy of purely sumptuous taste with no flashy decorative distractions. That also pretty much sums up what you have at Le Normandie during his visit. Expect some beautiful French cuisine that feels simply fulfilling.

Our lunch began with a selection of canapés: Gougère, Fish cake with saffron emulsion and Foie gras parfait with chocolate and pistachio. One bite at the Gougère, and the crispy, savoury smell of bread emanates — it’s unmistakably French in every way you imagine a French pastry should be. The salty and soft simplicity of the Fish cake gave us a taste of things to come as the rich and unique taste of Foie gras reflected how well the chef could work with chocolate and pistachio — both ingredients you would experience again in the dessert.

The two appetisers are both seafood dishes: Ceviche of sea bass and marinated octopus slices, crisp vegetable salad and Filet of salmon. I adore the aromatic juiciness of the Ceviche, with the fish and octopus giving a not-too-soft mouthful, which is balanced by the crispiness of salad. For the second dish, the salmon from Scotland feels tender, with the citrusy taste of egg mimosa and the softness of bok choy bringing out the taste of pilaf rice.

I went with beef for main dish — Pan-roasted beef tenderloin tournedos “zingara” style. Chef recommended it cooked medium rare, which happened to be my personal preference. Served with baby onions, mushrooms, beans and crispy wontons, the dish is a true French culinary gem — simple and yet, everything is done to perfection. The beef was tender, juicy and each bite filled your palate with soft, fulfilling taste of the sauce, which was cooked with ox tongue to beef up its rich flavour.

I did have a bite of another main course — Filet of turbot cooked meunière with croutons, green vegetables and grape emulsion. Light compared to the beef, this seafood main is a dish of creativity — with colourful sauces made of different ingredients as well as almond puree and jelly come together to bring out a unique flavour and texture.

The lunch finished with a set of three desserts: Pistachio creme brûlée, Smoked Jivara chocolate mousse and whiskey cream and Lemon meringue tart. While it’s difficult to find fault in Alain Roux’s creations since the Chef Patron of The Waterside Inn is one of the most revered Master Pâtissiers in the world, I’d handpick the Smoked Jivara chocolate as the sole reason you may want to splurge on this course. It’s the dessert dish you could describe as distinctly “masculine” — the smokiness and the hint of alcohol, combined with the perfectly sweetened chocolate — making it a dish men would love to have a bite, and women would like to slowly nibble until it’s all gone in their mouth.

The special meals at Le Normandie prepared by Chef Alain Roux starts from at THB 4,900++ per person for lunch and THB 8,900++ per person for dinner and an addition of THB 4,100++ for wine pairing. Advance reservations are required. Only until January 25, 2020. For reservation, contact Le Normandie at Mandarin Oriental, Bangkok, tel. 0 2659 9000 or email mobkk-normandie@mohg.com . For more information, visit www.mandarinoriental.com/bangkok