Prestige Gourmet: Gaggan Anand is Back, and Here’s What he Has in Store

Wine & Dine
Prestige Gourmet: Gaggan Anand is Back, and Here’s What he Has in Store
Share
Next article

After a dramatic exit from his previous restaurant, chef Gaggan Anand is back with a new hip, edgy avatar. Prestige fills in the intriguing pre-dining questionnaire and gears up for what’s in store.

Dinner service is about to kick off and it’s fitting that Eminem’s “Without Me” is booming from the speakers. In a twisted sense, when the controversial rapper rhymes how his absence created a void on the rap scene and he’s back to give people something to talk about, it mirrors chef Gaggan Anand’s reboot on Bangkok dining scene. After a controversial exit from his four-time Asia’s 50 Best topper and two-Michelin star eatery in August last year, the irrepressible chef quickly rebounded. Along with his band of “rebels” he found a new location, had it recast to his specifications, and opened in a record two months. Gaggan Anand (the restaurant) is the literal finger to detractors who said his reign as one of the top chefs in the world had ended. “This restaurant is something I always wanted but couldn’t create. Not so much the restaurant design, but the way the guests eat and have fun,” he said in one interview in an apparent dig at the creative restrictions he faced previously. “Everything is a fantasy and has a point of excitement. We are having more fun with everything we are doing. People come here and don’t want to leave. For me, it’s a total state of happiness.” Its stark concrete exterior is veiled in foliage and the building itself is split into three different “experiences”. Sloping ramps take you up to Arena G, the main dining area on the first floor. Under a night sky of twinkling lights and moon-shaped pendant lamps, tables are grouped around an open kitchen. The set price here is THB 8,000 per person, while the eight-seat private dining room at the far end of the room requires a minimum spend of THB 120,000. But the most coveted seats in the house are at ground level at the audaciously named G’s Spot (THB 12,000 per person). Enclosed in glass, the intimate 14-seater with its clubby vibe, low open-kitchen counter and green leather chairs takes communal dining to a new level. A red neon sign exhorts you to “be a rebel”. To gain entry to this sanctum sanctorum, diners must answer a risqué questionnaire that delves into their most embarrassing moments, asks about their favourite rock bands, and even queries what they would bring to the table if they were chosen to sit with the other disciples. As the lights dim and the enfant terrible of the culinary world and his band of merry rebels take to the stage at G’s Spot, expect the unexpected. Think School of Rock meets Hell’s Kitchen. The soundtrack is eclectic, relentlessly shifting gears. The post-grunge rock of the Foo Fighters is followed by the comedic rock of Tenacious D, which gives way to the whisky tenor of Rod Stewart and electro-instrumental icons Hilight Tribe. There is loud swearing, ribald tomfoolery, singalongs and drinking games, and even Gaggan schooling the assembled how to bust the “screw the lightbulb” move. It’s a four-hour roller-coaster journey (maybe longer) of Gaggan’s larger-than-life personality, musical tastes and his bite-sized progressive dishes. In a shift from the jiggery-pokery of molecular gastronomy, foams and airs are out. Instead the focus is on seasonality, sustainability, and supporting local producers. The cooking is now complex and personal. It’s designed to bring down the barriers of fine dining with diners encouraged to eat most of the courses with their hands. “Our entire menu is completely reinvented. I’m cooking food that I couldn’t cook before. Here, we have greater technical ability, so I am able to cook all the things that I want,” explains Gaggan, adding, “we didn’t bring anything from the old restaurant, including the dishes.”

Emojis continue to tell the story of the 25-course seasonal menu that has a few nods to his most famous dishes. Each diner receives a jumble of jigsaw pieces each featuring an emoji. The goal is simple: finish the puzzle in the order the courses come out. As Eminen segues into “Human” by The Killers, Lick It Up Ver 2.0. is presented to us. A paste of cauliflower, chili yuzu, and raisin chutney is spread thinly over a platter embossed with the map of the world. The countries are sprinkled with multicoloured vegetable dyes in a celebration of the Indian festival of Holi. You are encouraged to lick up the country you are from first, or start with all the others leaving your homeland for the last. It’s fun and the flavours are reminiscent of pao bhaji, a popular Mumbai street food.

The Yoghurt Explosion, his most famous creation, gets a makeover too. A lily pad made from green chutney is dotted with whey and pop rock candy, before the sphere filled with chaat flavours is spooned on top. The courses cross borders in the same manner as the music swings from genre to genre. They riff off the cuisines of India, Thailand, Portugal and Japan. Closer to home is the egg emoji, a version of somtum khai kem. A “somtum marshmallow” is drizzled with a house-made emulsion of salted eggs, accompanied by tiny fried kung ten (shrimp) heads and rolls of fresh papaya. From the Indian subcontinent there is ghewar, a traditional honeycomb sweet from Rajasthan transformed into a savoury course. Made from milk it is topped with Hokkaido king crab, caviar, dashi jelly, shisho blossoms, and sour cream for a burst of flavours. Also, from the same Indian state, comes a fiery meat curry, laal maas. A house-made chili ketchup is served with a 21-day dry-aged Mottainai lamb chop. Fed a diet of carrots and sediment from the olive oil making process, the meat of this special lamb is akin to Wagyu beef. 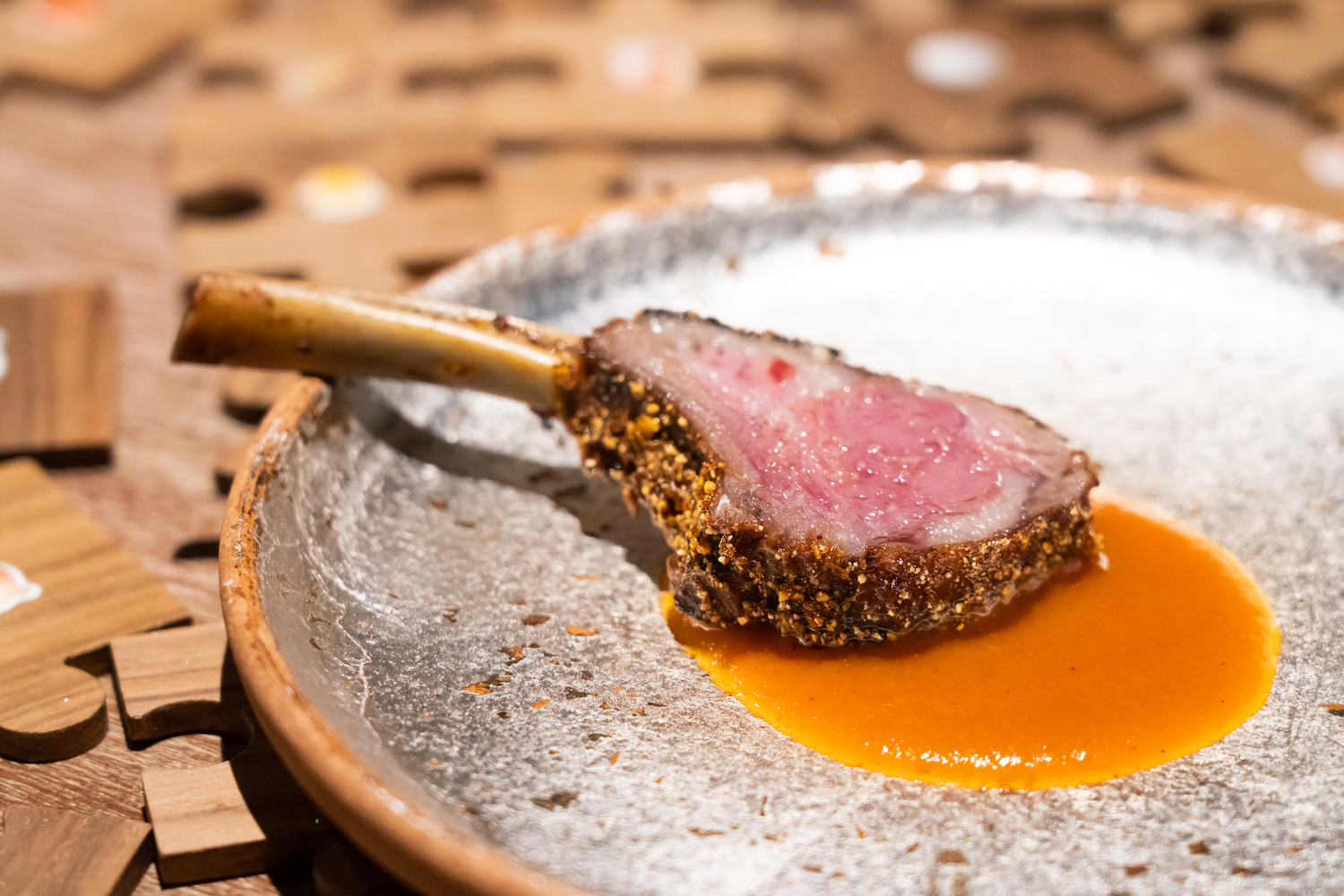 Things continue with pyaz kachori (onion pastry) stuffed with onions and peas, and served with a coconut green chutney; dum aloo made from both waxy and starchy potatoes that comes in a bowl made from green and purple cabbage; and a taco dosa with a sweet potato-banana flower filling, gunpowder spice mix and a tamarind-ginger chutney. A tomato tea made by roasting tomatoes, beetroot, and coriander root, and then hanging the mix for a full day, brings back memories of tomato soup served at colonial-era clubs back home in India. Vindaloo, which straddles both Portuguese and Goan culinary history, is served on a skewer. The pork, traditionally used, is substituted with bamboo shoot studded with puffed quinoa for some crunch. And what would a Gaggan experience be without a few courses that are there just for the fun of it? In a diss to an arrogant diner, a ringshaped shell of white chocolate filled with pani puri water is plated on your middle finger from where you are supposed to eat it. Another relives the experience of eating popcorn with a tiny bag made from corn, filled with freeze-dried popped corn, corn ice cream and a tomato chaat. In this parade of creative dishes, a couple don’t find favour with my palate: one is the foie gras ice cream, rosemary ice, and shaved black truffles, and the other, a Japanese fish monaka, filled with coconut ice cream, and tobiko roe. All through the meal, sommelier Vladimir Kojic is in his element pairing the dishes with nine natural and biodynamic wines curated from small-scale producers; even throwing in a sake pairing. We first reviewed Gaggan for Prestige back in 2011. It was his first-ever tasting menu. Subsequently I even worked with him, eating different incarnations of dishes during that time. Since then he has come a long way. Will he make it to the top of the heap again? Only time will tell. In the meantime, “guess who’s back, back again” and ready to take a shot at the top spot.

Sign up to get the latest luxury and lifestyle news delivered to your inbox.
Restaurants Gaggan Anand Wine and Dine gaggan PRESTIGE GOURMET
Gavin Nazareth
DINING