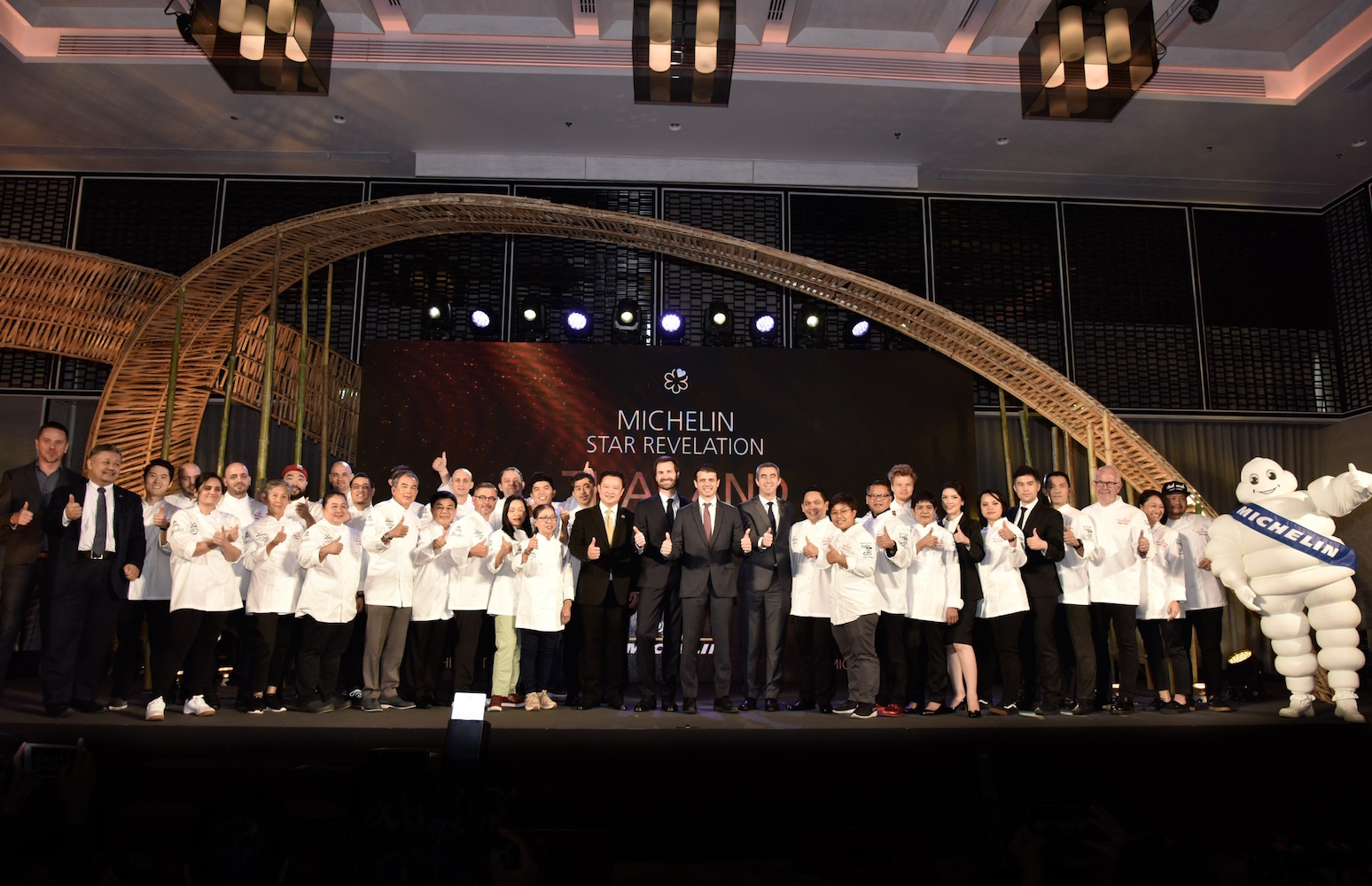 The Michelin Thailand 2020 Guidebook Launch: Which Restaurants Made it to the Top?

Wine & Dine
The Michelin Thailand 2020 Guidebook Launch: Which Restaurants Made it to the Top?
Share
Next article

On the morning of Tuesday, November 12th, the gorgeous Bangkok Marriott Hotel The Surawongse played host to the launch of the Michelin Guide Bangkok, Chiang Mai, Phuket & Phang-Nga 2020. It’s the 3rd edition of the wildly popular gourmand’s guidebook, and this year a record 29 restaurants in Thailand were awarded coveted Michelin star.

Where to Dine in Bangkok this November
Wine & Dine

The 2020 edition of Thailand’s Michelin Guide includes a total of 282 dining and 74 lodging establishments, with a total of 5 two-star, 24 one-star, and 94 Bib Gourmand eateries listed. In addition, many deserving restaurants have earned the ‘Michelin Plate’ distinction, which signifies “very good food” (as opposed to the Bib Gourmand which generally signifies smaller restaurants selected by inspectors for their excellent value for money).

“This year, the locavore movement, or the use of locally-sourced ingredients, are becoming the true stars of Thailand’s foodscape,” remarked Gwendal Poullennec, International Director of Michelin Guides. “In addition, we see the glorious rise of traditional Thai cuisine, as – for the first time ever globally – two traditional Thai restaurants, both promoted from one star, are on The Michelin Guide’s two-star list.”

The two restaurants Mr. Poullennec alluded to in his opening address are R-Haan, where food ingredients from all over the country capture the authentic essence of both regional and royal Thai cuisine, and Sorn, a Southern Thai restaurant with a focus on long lost recipes, using ingredients sustainably sourced from a trusted network of farmers and fishermen. Both restaurants received one-star in the 2019 edition, but this year they join Le Normandie, Mezzaluna, and Sühring in the exalted two-star winner’s circle.

Among the 24 one-star establishments in the 2020 edition of the guide there are four newcomers – all based in Bangkok. They include Khao, Table 38, and 80/20 (all three of which elevate Thai cuisine to dizzying new gastronomic heights) and Chef’s Table at lebua, a fine dining restaurant that serves contemporary French dishes created by multiple Michelin-starred chef Vincent Thierry, utilising premium quality local and imported ingredients.

Interestingly, there were no actual stars given to any Chiang Mai based restaurants, although many notable eateries were awarded Bib Gourmand and Michelin Plate status. These include such respected favourites as: Ginger Farm Kitchen, Huan Soontaree, and Khao Soi Mae Manee (Bib Gourmand winners); and Blackitch Artisan Kitchen, Cuisine De Garden, Khao at Four Seasons, and Oxygen Dining Room at X2 Chiang Mai (Michelin Plate winners). Meanwhile, PRU – at the spectacular Trisara Resort – remains the only one-star rated restaurant in the Phuket/Phang-Nga region.

After the awards ceremony chefs, media, and VIPs mingled to discuss and digest the results over a buffet luncheon prepared by the superb restaurants at the Bangkok Marriott Hotel The Surawongse. Everyone seemed generally shocked that Chiang Mai was denied any stars this year, however no one seemed to dwell on the fact that celebrity chef Gaggan Anand was notably absent from the morning’s proceedings (having already closed Gaggan in August, and having opened his new restaurant, Gaggan Anand, too recently to be included in the 2020 guide). For all the winners it was a magnificent start to a day that is set to conclude with a black-tie invitation only dinner gala.

The complete selection of The MICHELIN Guide Bangkok, Chiang Mai, Phuket and Phang-Nga 2020 is available at leading bookstores for THB 650 (from 16 November 2019), or in a bilingual digital edition (Thai and English) on the website.

The 2020 Michelin-starred restaurants at a glance:

Find out more about the Michelin Thailand 2020 Guidebook at guide.michelin.com.

Wine and Dine art and culture

The Beginner’s Guide to Adopting a Vegetarian Diet

Easy Gourmet Popcorn Recipes You Can Make at Home

Check Out What Bangkok’s Food Influencers Have Been Ordering Online